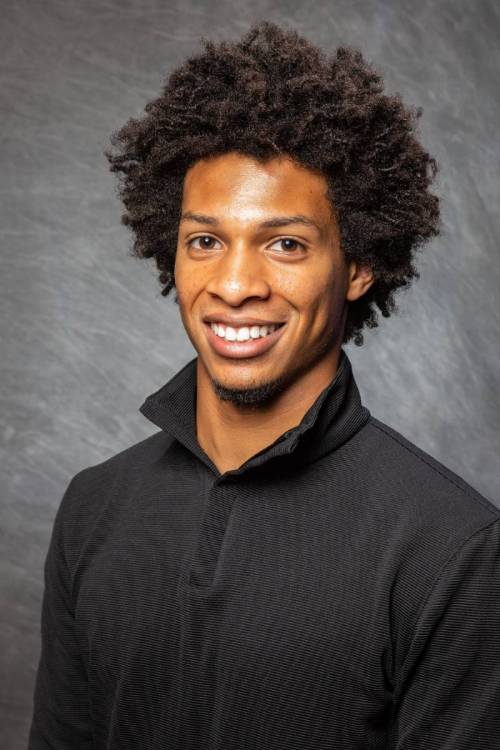 USF Computer Science and Engineering junior Willie McClinton is one of two USF students this year to earn a Goldwater scholarship — the most prestigious undergraduate award in natural sciences, engineering and mathematics.

McClinton is one of 11 students in USF’s history to earn the scholarship, which supports college sophomores and juniors who how promise of becoming the nation’s next generation of research leaders. Only around 1,300 students are nominated for the scholarship each year, which provides students with $7,500 for educational expenses and research support.

“The success of Willie demonstrates that our undergraduate students are among the cream of the crop,” said USF Department of Computer Science and Engineering Chair Sudeep Sarkar, Ph.D. “It paves the way for USF to be an attractive option for talented high school students to apply for a productive education and research program in their studies.”

One way McClinton said he may apply the scholarship is by presenting brain-computer interface (BCI) research he completed in the lab of USF Computer Science and Engineering Professor Marvin Andujar, Ph.D., at international conferences. This includes the ACM CHI Conference on Human Factors in Computing Systems McClinton will attend May 4 through May 9 in Scotland, as well as the 21st Human-Computer Interaction conference this July in Orlando.

“Presenting research in other places tends to be really expensive, so having that extra money for conferences and presentations would be really helpful,” he said.

While he was born in Tampa, McClinton spent several years in California, Las Vegas, other cities in Florida and New Mexico while growing up due to his father serving in the Air Force. His mother had completed a master’s in speech-language pathology at USF, and after finishing high school in New Mexico, McClinton decided to return to Tampa to pursue an M.D. in neuroscience.

He applied for the U.S. National Institute of Standards and Technology’s (NIST) Summer Undergraduate Research Fellowship in his freshman year — a competitive program connecting undergrads with federal research facilities to participate in a unique, tech-focused research experience.

During McClinton’s NIST fellowship, he helped run and build the surveillance event detection portion of NIST’s 2018 TRECVid evaluation — an annual contest where university researchers, including those from Carnegie Mellon University and the University of Tokyo last year, use machine learning algorithms to scan and analyze vast amounts of images and videos from social media to automatically detect important events like fires and riots.

The experience showed McClinton the impact of computer science research and was one turning point in his transition from neurologist to computer scientist.

“I applied for the NIST fellowship my freshman year, and getting to do research in a national lab that early on really helped me construct a career in research and showed me what research in computer science would be like,” he said.

Another turning point for McClinton was meeting USF Office of National Scholars Director Sayandeb Basu, Ph.D. Basu highlighted the differences of a Ph.D. and an M.D. for McClinton, as well as what his role as a doctor would be compared to that of a computer scientist. 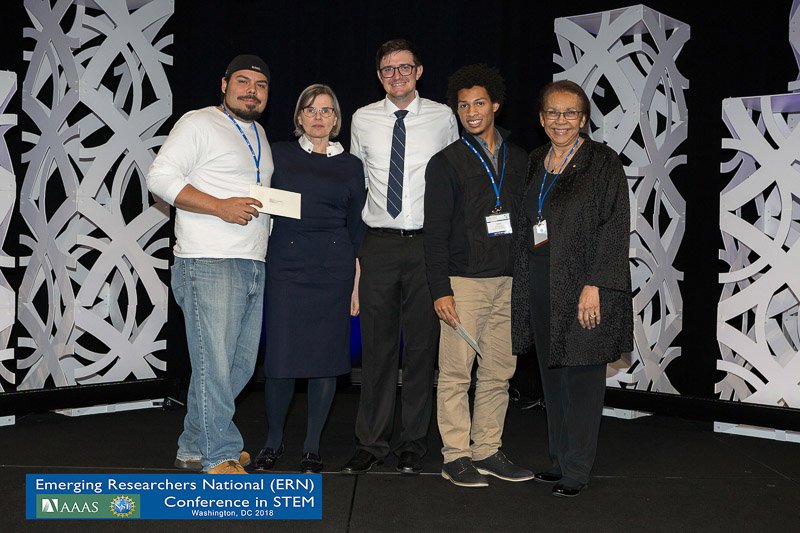 Willie McClinton (second from right) won first place for his presentation at the ERN Conference in STEM in March 2018. McClinton received travel funding for the conference from the National Science Foundation's Florida-Georgia Louis Stokes Alliance for Minority Participation Program facilitated through the USF College of Engineering’s Office of Diversity and Outreach.

McClinton applied last spring for an undergraduate research position in Andujar’s Neuro-Machine Interaction Lab before the lab was even finished, and he began his work there by leading development of a program that would allow users to paint in virtual reality (VR) using just their thoughts sent through a BCI.

Similarly to the lab’s brain-controlled drone research, users wouldn’t need to hold a controller or move to operate the program. They would only need to wear an electroencephalography (EEG) headband. McClinton said that the creative expression and resulting art exhibits that can come from painting by thinking have been proven to be beneficial to people with Lou Gehrig's disease. McClinton wanted to see if the lab could incorporate this technology into a VR environment using Oculus Rift headsets and development engine Unity.

As he still wanted to focus on studying the brain, he said that this project was a good combination of computer science research and brain research through BCI.

The project began with McClinton as its sole researcher, and he worked under the guidance of Andujar and lab Ph.D. student Sarah Garcia throughout the Summer 2018 semester until the lab’s later rapid expansion led to a larger team for the project.

“I did the front-end work, the code and the EEG (implementation) as well,” McClinton said. “That’s been my baby for a while.”

Andujar said that most times he stopped by the lab last summer, he’d find McClinton already busy working on the project. He said his guidance of McClinton was mostly general advice and help with small issues, as McClinton always had ideas for what the next steps of the project should be.

“I think he has initiative, a hunger for knowledge and really wants to succeed,” he said. “I could definitely see him succeeding as a Ph.D. student … for being an undergrad that young and being able to handle a Ph.D.-level project by himself.”

Andujar said the facilitation of the project in his lab has been one part of a year-long collaboration between computer science and engineering professors and Basu to help McClinton succeed in winning this year’s Goldwater Scholarship.

He thought the project would be competitive because of the scarcity of BCI research in the U.S. — especially when combined with a VR application. He said he’s only known of similar work having been done in Europe.

“For the Goldwater — the most prestigious undergrad scholarship in the nation — students need their own project, and it’s something that has to be very unique,” Andujar said. “I don’t think any other computer science student in Florida or even in the nation would have this kind of project.”

To apply for a Goldwater Scholarship, students can’t apply directly. Instead, they must be nominated by their university campus representative in addition to supplying three recommendation letters, a research essay and outstanding academic transcripts. McClinton was nominated by Basu, who worked closely with him and faculty mentors to perfect his application and write a meticulous nomination letter, respectively.

The project on cyberbullying detection is funded by a three-year grant from the National Science Foundation (NSF) and is also a collaboration between faculty at the USF College of Engineering, College of Education and College of Arts and Sciences.

McClinton is using data mining and feature extraction techniques to develop an app that analyzes messaging patterns and timing of texts — metadata — from the phones of teens and pre-teens. The metadata doesn’t need to show message content to identify potential instances of cyberbullying, protecting users’ privacy. The resulting app could one day alert parents through their phone carriers to abusive messages without either party needing to read them.

“Developing this app is a complex procedure,” Chellappan said. “I wouldn’t ask any other students to do it except Jim or Willie.”

Youth study participants report to McClinton and fellow researchers when they feel bullied during the project to help match malicious messages to telltale metadata. Their interactions are set up so that participants remain anonymous and messages are never read, ensuring privacy while researchers are pointed in the right direction.

“You get an outside perspective of the impact of engineering technology,” McClinton said. “(The College of Education’s) Dr. Nathan Fisk comes from an educational and social sciences background and really knows the social impact our technology could have and what we can do to ensure we’re actually helping and not creating more problems along the way.”

Chellappan said McClinton was highly recommended to him by Mirzakhalov before he joined the lab. Between McClinton’s mathematics and programming knowledge and his ability to work well with a team, Chellappan said he had an impact on the lab from his first day there.

“Willie is one of the top two undergraduate students I’ve worked with in the last 15 years,” Chellappan said. “Many of my grad students like to involve Willie in their projects … and he will push the boundaries (in his research).”

As part of the lab’s project to build an app that can help users identify disease-carrying mosquitoes, McClinton and the lab team spend several hours photographing droves of mosquitoes whenever they are captured and identified by Hillsborough County’s mosquito control. While more than 40 species of mosquito live in Hillsborough, only four or five are capable of carrying deadly diseases like malaria and the Zika virus.

Photographing all of these mosquitoes one by one under a microscope gives McClinton and Mirzakhalov the dataset they need to build an app giving people the ability to tell a disease-carrying mosquito apart from a relatively harmless one.

“We now have a database of about 20,000-25,000 mosquito images taken from smartphones, and we may be the only people in the world that have that data,” Chellappan said. “We’re trying to submit a paper any time this week or next week.”

Users would be able to take a picture of a mosquito, and the app would tell them its genus, species and the diseases it carries. In the future, these pictures could be uploaded online and gathered by organizations like the Centers for Disease Control and Prevention to detect potential disease outbreaks.

“This work has an important impact on Florida, and also globally,” said Sarkar.

Aside from his roles in the Neuro-Machine Interaction Lab and USF Social Computing Lab, McClinton is also a co-founder of the USF Society of Competitive Programmers. The organization allows USF students to travel to hackathons hosted around the country, which challenge students to team up and design and build a program, robot or other tech idea throughout a weekend. 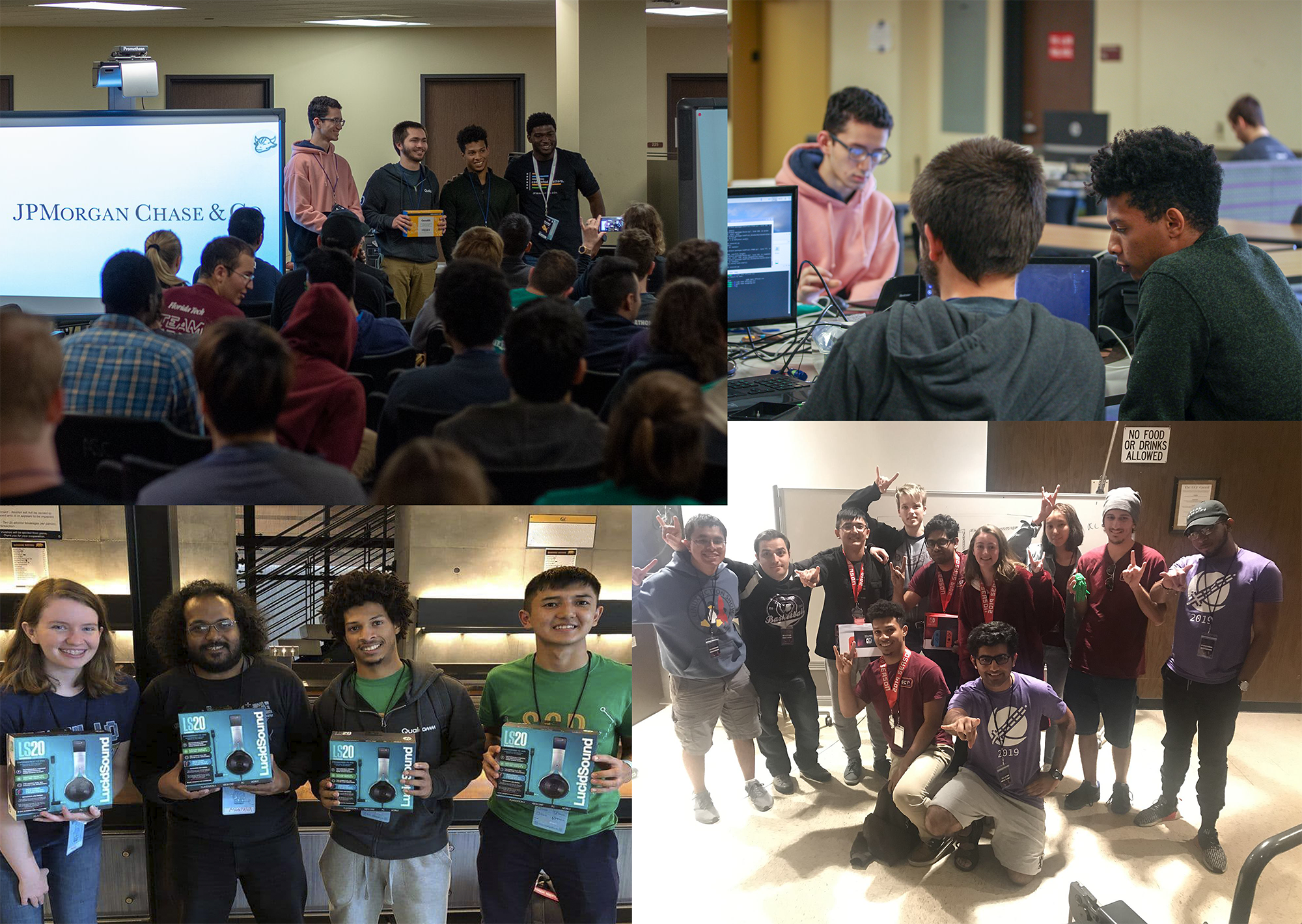 McClinton and other students in the organization have traveled to numerous hackathons since the club’s creation last spring, including ones hosted at MIT, Caltech, Stanford, UC Berkeley, the University of Pennsylvania and several Florida universities.

In the future, McClinton said he would like to focus his research efforts on general purpose robots — robots capable of performing a wide variety of tasks on demand, such as cleaning, taking care of pets or even shopping.

“I’m always for research that can have a good impact on a lot of people,” he said. “There’s a huge impact (general purpose robots) could have if done right.”

McClinton plans to pursue a Ph.D. and wants to mentor undergraduate and graduate students later in his career to guide them through their own research the way his mentors guided him.

“With all the amazing mentors and people who helped me throughout my career, I thought it would be what’s due of me to give back,” he said.

McClinton will also apply for an NSF Graduate Research Fellowship this fall. The fellowship is one of the most prestigious national fellowships for Ph.D. students in STEM and is one of a host of future scholarships and fellowships that being a Goldwater Scholar will support him in earning.

About the Barry M. Goldwater Scholarship