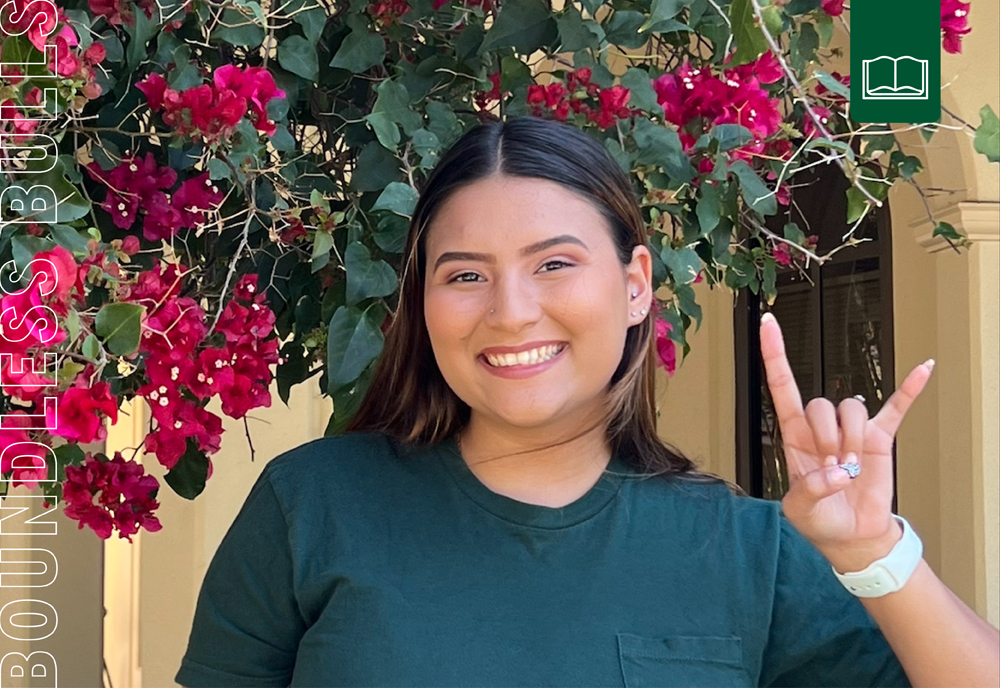 As Hurricane Maria approached Puerto Rico in September of 2017, much of the island was still recovering from Hurricane Irma, which had made landfall earlier that same month, and 80,000 residents were without power.

“It was terrifying,” said Genesis Rivera Marrero, now a senior on the Sarasota-Manatee campus, who was living with her father in San Juan when the Category 4 hurricane made landfall.

“I didn’t see my mom or my siblings for about a week because there was no way to go to their house,” she recalled. “My dad’s house had water on the floor. The wind was so loud, I thought the windows were going to go.”

When her mother and stepfather relocated to the Tampa Bay area, Rivera Marrero followed, transferring from the Universidad del Sagrado Corazón to USF.

“I moved here with two suitcases and a few boxes that I shipped with a shipping company,” Rivera Marrero said. “That’s all I brought from Puerto Rico.”

Rivera Marrero sheltered in place with her mother, stepfather and four of her siblings at their house in Ruskin when Hurricane Ian made landfall on Sept. 28.

“I’m just really grateful,” she said. “That’s the word I use to describe how I feel about my move. I’m grateful for all the opportunities I've had on campus and for the people I’ve met and made connections with.”

Since arriving on the Sarasota-Manatee campus, Rivera Marrero has embraced her new home with open arms. In addition to her coursework, she works three campus jobs — community leader and peer coach in the Department of Student Support Services, coordinator for the Campus Activities Board and lead work-study in the Office of Veteran Success. She is also the president of the Student Veterans Association and the Latin American Student Association (LASA), the latter of which promotes Hispanic and Latino culture through community engagement. In the spring, she received a Multicultural Excellence award from the Office of Multicultural Affairs. And, this summer, she studied abroad in Salamanca, Spain, where she came to better understand her Puerto Rican “roots.”

How does she do it? A well-organized calendar — or four — and a passion for community building.

Her top priority this semester is rebuilding LASA, which once boasted 40 active members on the Sarasota-Manatee campus, but has struggled to maintain that level of engagement since the onset of the COVID-19 pandemic in March of 2020.

“We try to do fun events that will also bring awareness to the culture and to show people on our campus that they have a community,” said Rivera Marrero, who runs the club with friend and classmate Evelyn De Oliveira. “We’re already planning an event for Día de Muertos and a trip to EPCOT.”

Reestablishing LASA’s campus presence is important to Rivera Marrero, who knows how it feels to be the new kid on campus.

“My first language is Spanish,” Rivera Marrero explained. “I transferred from a university in Puerto Rico, where I would always talk in Spanish. And then, when I moved here, I needed to talk in English all the time. So, I was like, ‘Where can I find a community and someone I can talk to in Spanish?’”

“Knowing that I had someone who looked like me was really nice,” Rivera Marrero said. “That’s something, with the club, we really want to let students know they have a community that speaks Spanish — or Portuguese like Evelyn does. They have someone that they can talk to.”

Rivera Marrero is poised to graduate in December with a bachelor’s degree in general studies, a concentration in educational foundations and a minor in Spanish. But, if she has her way, this is only the beginning.

“I would like to keep working in higher education,” she said. “I want to help others the same way that, when I got to USF, I was helped.”

To learn more about the Latin American Student Association and participate in upcoming events on the Sarasota-Manatee campus, visit BullsConnect.

Boundless Bulls is a collection of stories about what truly makes USF great — the people. It is a focus on our community footprint, our impact and the trajectory of where we can go together. To nominate a member of the USF Sarasota-Manatee campus community for Boundless Bulls, please fill out this submission form.