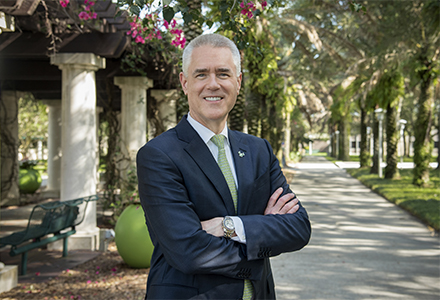 On July 1st, Dr. Steven C. Currall took office as the University of South Florida’s 7th President. During his first 100 days, President Currall embarked on a listening tour, meeting with students, faculty and staff at each of USF’s three campuses to hear ideas and identify strategic opportunities. In August, Currall led his first set of USF commencement ceremonies, conferring more than 3,200 degrees across the university campuses, and on November 14th he outlined his vision for USF's future in a speech to students, faculty, staff and alumni during his inauguration ceremony. 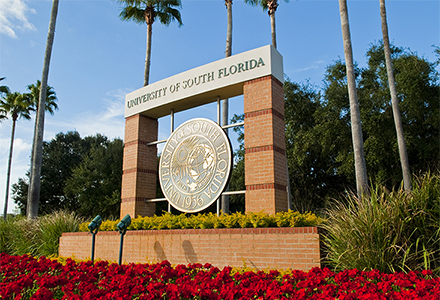 America’s fastest-rising university, the University of South Florida moved up 14 spots in U.S. News & World Report’s list of best public universities, breaking into the top 50 for the first time in the institution's history. Since 2015, USF has climbed 44 spots from No. 88 to No. 44, an unparalleled trajectory among public or private universities in the United States.

Other rankings in which USF is listed in the top 50 include: THE World Reputation Ranking: Public-US (#38), Kiplinger Best Public College Value: In-State (#39), and Top American Research Universities (TARU): Public-US (#26-50). TARU provides a ranking range rather than individual number. The university has also seen remarkable gains in Forbes America’s Top Colleges. USF has jumped 59 positions since 2015, now ranking #73 among public universities.

USF has also been recognized as a national leader—No. 1 in Florida and No. 5 in the U.S.—for reducing inequalities, according to new rankings published by the Times Higher Education (THE). 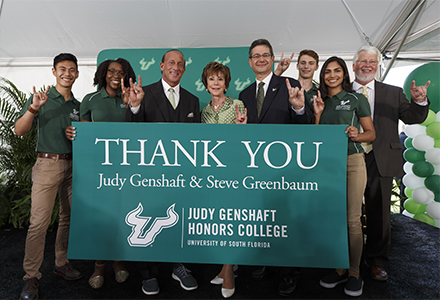 In May, Dr. Judy Genshaft and her husband, Steven Greenbaum announced their historic gift, donating more than $20 million dollars to the USF Foundation to establish the Judy Genshaft Honors College. One of the largest gifts ever made by a sitting university president to their institution. The donation will help with the construction costs of the new honors college, a five-story building on the USF Tampa campus.

On July 1, Genshaft retired, after serving 19 years as the USF System President. In addition to her generosity, Genshaft left a significant impact on USF, greatly improving the graduation rate, leading USF to preeminence, and surpassing a $1 billion fundraising goal among many other accomplishments. 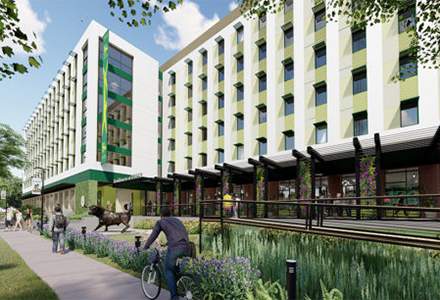 Tampa bay area leaders joined faculty, staff and students for a ceremony marking the groundbreaking of a new residence hall and dining facility at the USF St. Petersburg campus (USFSP).  In November, the 120,000 square foot building’s exterior was completed. Scheduled to open in July 2020, the six-story residence hall will have space for 375 students, increasing on-campus housing by 70 percent. 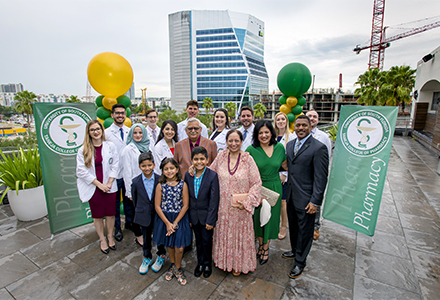 The University of South Florida received a $10 million gift from the Taneja Family Foundation to name the USF Health Taneja College of Pharmacy. The donation, made through the USF Foundation, is the largest philanthropic gift to a pharmacy school in the state of Florida. As a result of the gift, the Taneja College of Pharmacy will move into the new USF Health Morsani College of Medicine and Heart Institute facility in downtown Tampa.

Monica Wooden, cofounder and chief revenue officer of MercuryGate International, donated $5 million to the USF Muma College of Business’s Center for Supply Chain Management & Sustainability. A first of its kind in Florida, the center's faculty include five supply chain management experts who are leading researchers on logistics issues.

Other notable donations include a $1 million partnership with Jabil, of which $800,000 was given as a gift to bolster the university’s student success efforts by providing new experiential learning opportunities and skills needed to remain competitive in the job market. USF Sarasota-Manatee gathered stong community supporters to raise a record high $450,000 for student scholarships at the annual Bank of America Brunch on the Bay event in November. Kate Tiedemann and Ellen Cotton committed $3 million to endow the Tiedemann - Cotton Endowed Deanship at the Kate Tiedemann College of Business at USF St. Petersburg. 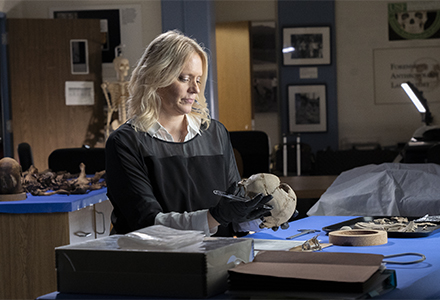 Kimmerle’s research team examined portions of land near the former Arthur G. Dozier School for Boys in Marianna, Fla., after a contractor discovered 27 anomalies during routine cleanup work. The USF team originally investigated the Dozier site from 2012-2016. During that time, USF researchers found 55 graves in a section of the property known as Boot Hill Cemetery, which is 24 more burials than had been previously reported. The human remains excavated by the USF team were returned to family members or reburied in Tallahassee.

Kimmerle also teamed up with National Geographic for a documentary about aviation pioneer Amelia Earhart, who disappeared over the Pacific Ocean during an attempt to fly across the world. Kimmerle was selected to test bone fragments that were first discovered on Nikumaroro Island in 1937, three years after Earhart’s radio signal was last transmitted in 1937. 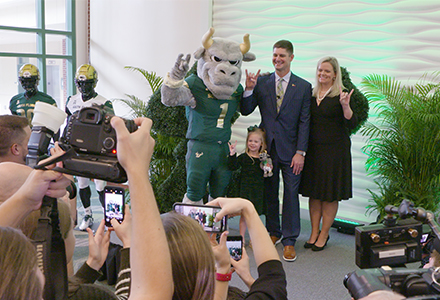 USF Vice President of Athletics, Michael Kelly, announced Jeff Scott as the fifth head coach in USF football history. A former co-offensive coordinator at Clemson University, Scott has played a key role in the rise of one of the most dominant football programs in the nation. A 2018 Broyles Award finalist, given to the top assistant coach in the nation, Scott has been exceptional at guiding student-athletes to record-setting success.

Marine Scientists discovered the largest seaweed bloom in the world. Using NASA satellite data, the research team led by Chuanmin Hu, PhD, professor of optical oceanography in the USF College of Marine Science found it weighed more than 20 million tons and stretched across surface waters from West Africa to the Gulf of Mexico. The thick seaweed has been particularly problematic for major tourist destinations, such as Cancun, Mexico. It releases hydrogen sulfide gas and smells like rotten eggs, which can be of concern to those with respiratory issues. 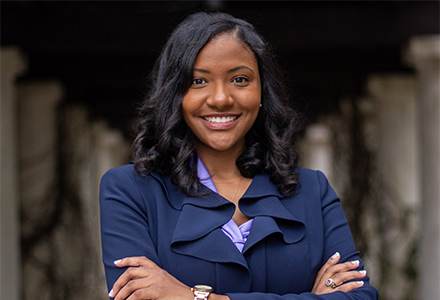 USF students elected Britney Deas as the first African-American woman student body president in the University’s history. Born in Miami, Deas is majoring in political science with a minor in mass communication. After USF, she plans to attend law school and says she hopes to make a difference through public service and advocacy. The Student Body President holds many responsibilities, including serving as a voting member of USF’s Board of Trustees and leading other high-profile committees and events. 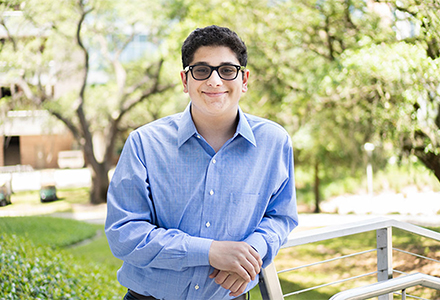 At just 16-years-old, Drew Falkowitz is the youngest person to ever graduate from USF. Growing up, the Tampa native says his parents always knew he was a little different than his friends. At 9-years-old, he started high school through the Florida Virtual School. By 14, he was taking dual-enrollment courses at USF. Today, he is a college graduate with a bachelor’s degree in cellular and molecular biology. As part of his coursework, Falkowitz has conducted research at the USF Health Byrd Alzheimer’s Institute. He says that while people are always surprised by his age, he always receives respect and support from the USF community. Falkowitz is continuing his education at USF – working toward a master’s degree in cellular and molecular biology. Beyond that, he plans to pursue a PhD/MD.