Our history is remarkable. In just 60 years, the University of South Florida has flourished into a top Florida university and a world-renowned research institution.

The University of South Florida is an institution like no other. Founded in 1956, we have redefined what it means to be a young university, breaking records and forging ahead to challenge even our oldest peer institutions. With incredible velocity, we advance communities and pioneer new higher education standards. We embrace the unknown. Conquer it. And then do it again. We define ourselves not by a name, a date, or a city, but by the impact we have on the world. We share one goal. We transform lives.

Take a look back at the 60 years of our institution’s history to learn more about our extraordinary progress – and what remains to be achieved. 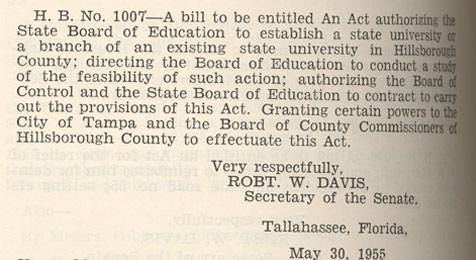 The Florida Cabinet approves a resolution to build the new university on the Fowler Avenue property. At the time, a private civilian airport occupied the space, which had functioned as the Hillsborough Army Airfield during World War II. USF would later be built on the practice bombing range just north of the airfield. 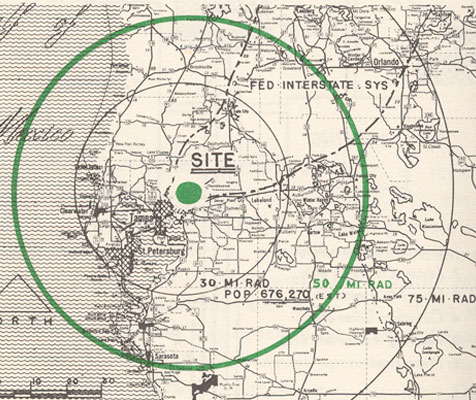 The Board of Control names John S. Allen the first president of USF. 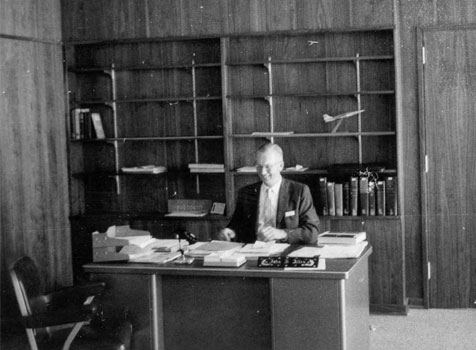 The Florida Cabinet approves the name "University of South Florida," in part because it is the southernmost state university in Florida at the time. 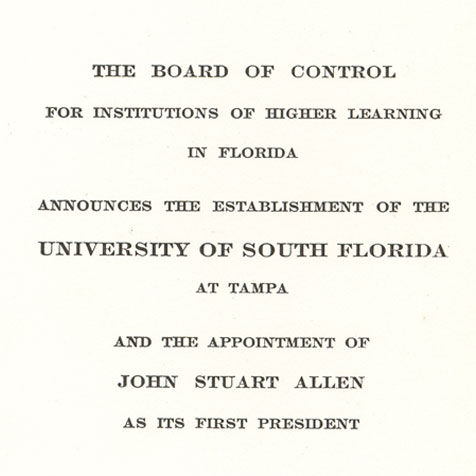 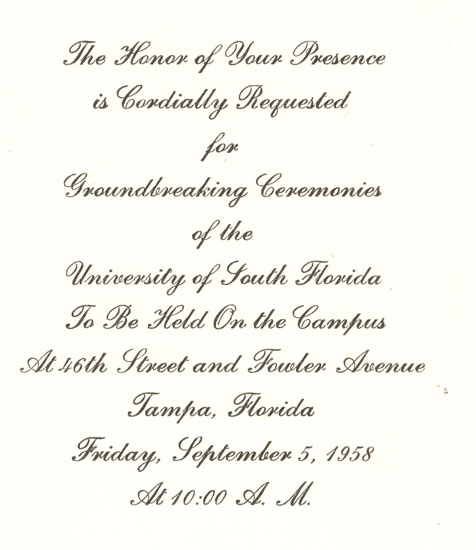 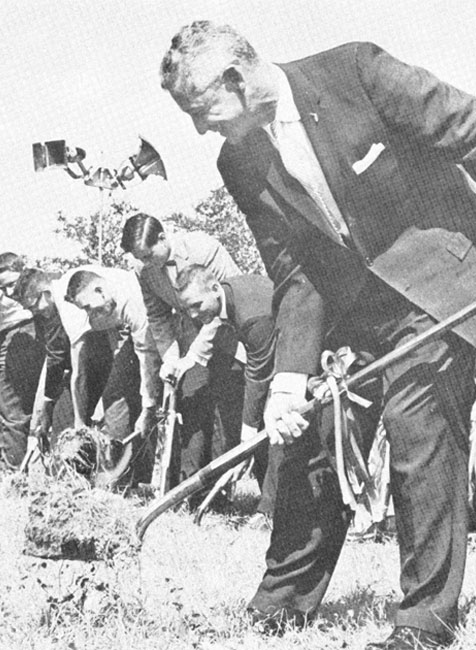 A convocation ceremony marks the first day of classes for USF’s first-ever students. With classes under way, USF becomes the first major state university planned, built and opened in the 20th century, as well as Florida's first university located in a major metropolitan area. 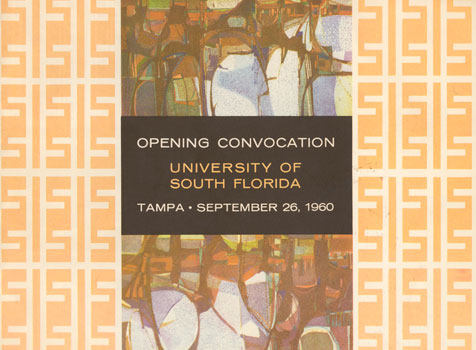 The "Golden Brahman" is chosen as the university's mascot and is unveiled at an All-University Fun Fest. 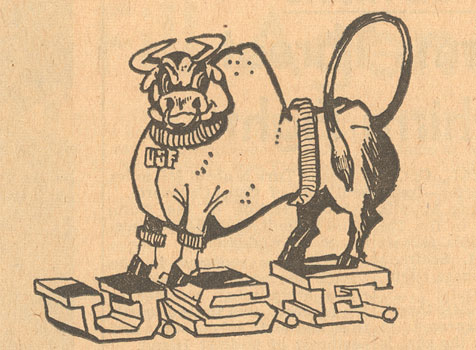 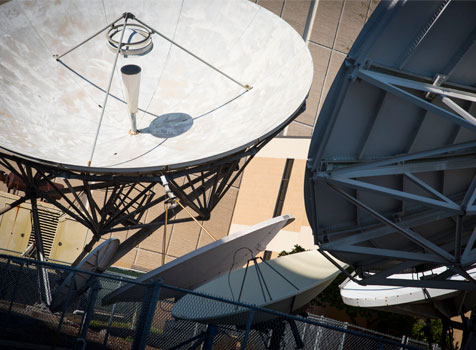 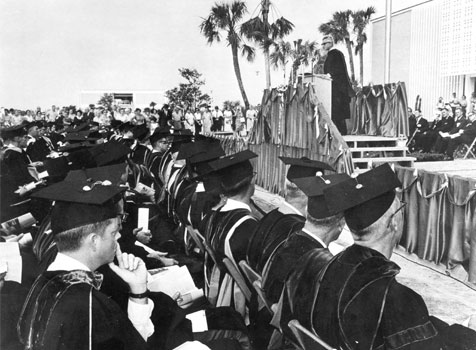 The Board of Regents approves planning for master's degree programs in all four colleges: Education, Liberal Arts, Basic Studies and Business Administration.

USF receives full accreditation from the Southern Association of Colleges and Schools.

USF occupies the site of the St. Petersburg campus on Bayboro Harbor. 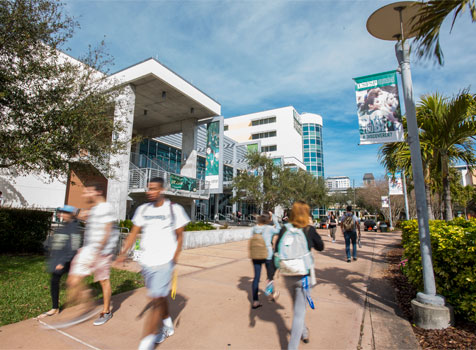 Students publish the first edition of “The Oracle,” the student newspaper that replaced the campus edition of the Tampa Daily Times, started in September 1960.

USF is admitted to the National Collegiate Athletic Association (NCAA).

The USF Alumni Association is incorporated.

The first USF basketball game is played against the University of Florida at Curtis Hixon Hall. USF wins, 85-78. 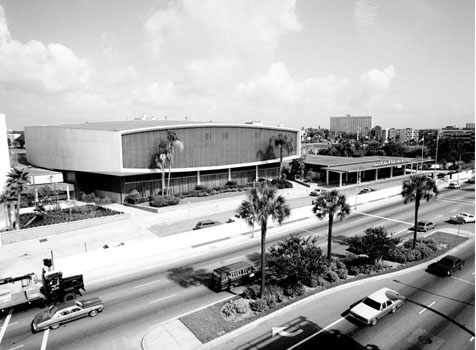 Cecil Mackey becomes USF's second president and begins an era that brings USF to a new level, with a focus on research and increasing funding. 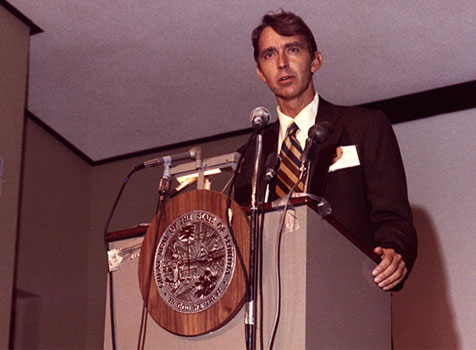 The College of Basic Studies is dissolved and the College of Liberal Arts is split into four new colleges: the College of Arts & Letters, Social & Behavioral Sciences, Natural Sciences and Fine Arts. The CBS acts as a community college within USF, instructing students in mandatory courses for the equivalent of two years.

The School of Nursing opens. 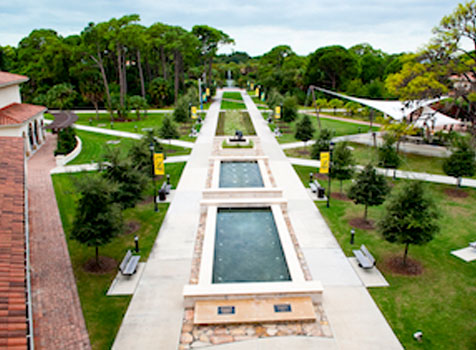 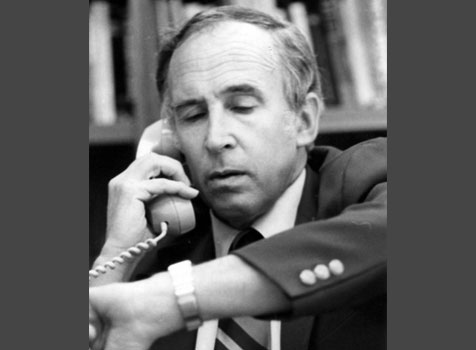 The USF Sun Dome is inflated and booked for concerts, sporting events and commencement ceremonies. 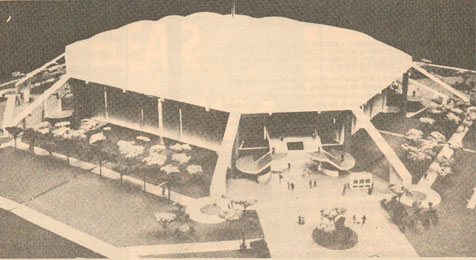 USF becomes the nation's first university to offer a Ph.D. in applied anthropology. 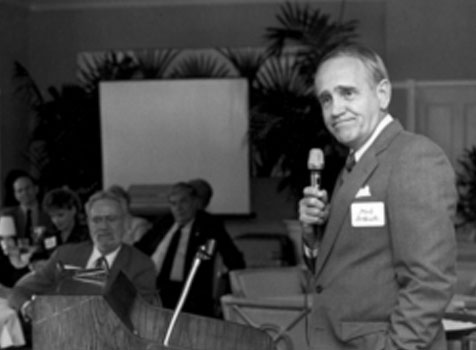 The Colleges of Arts & Letters, Natural Sciences and Social and Behavioral Sciences are merged into a new college: the College of Arts and Sciences. CAS becomes the largest college on the USF campus. 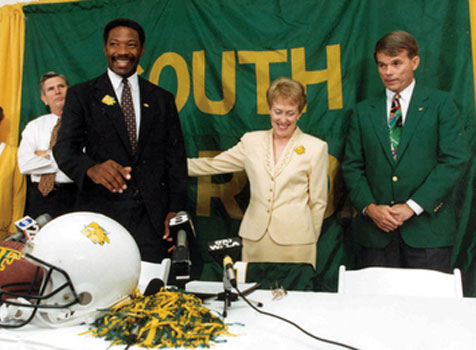 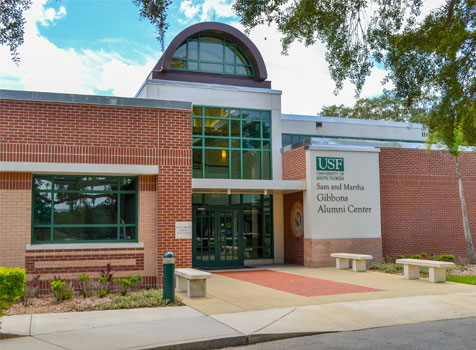 USF begins its first-ever season of NCAA football. The Bulls, playing in Division I-AA, open with an 80-3 win at Raymond James Stadium over Kentucky Wesleyan before 49,000 fans.

USF is named by the Florida Board of Regents as a "Research I" university, along with the University of Florida and Florida State University.

USF St. Petersburg begins admitting freshmen and sophomores under a plan approved by the Board of Regents and the Legislature to offer more classes for underclassmen. Students can take all the classes they need at St. Pete and earn a 4-year degree there.

Judy Genshaft takes office as the sixth president of USF. 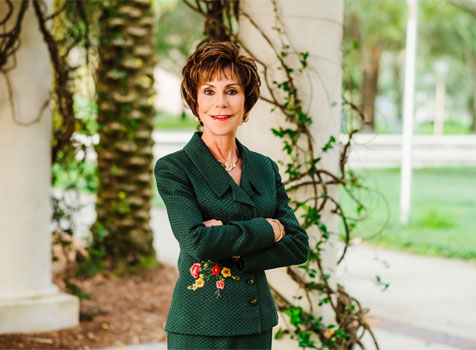 USF is admitted into the Big East Conference.

The Board of Trustees approves for USF to become a system.

Drs. Kiran and Pallavi Patel pledge $18 million to USF. With the state match, the gift is valued at $34.5 million, the largest gift in USF history. The gift will be used to construct the Dr. Kiran C. Patel Center for Global Solutions. 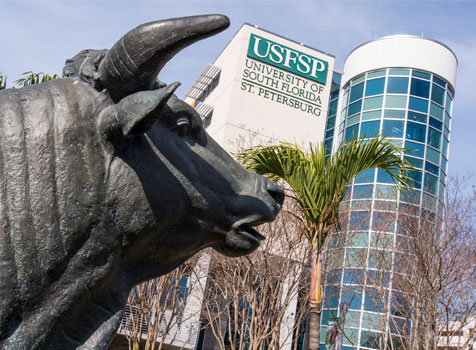 USF Sarasota-Manatee holds its first day of classes on its new, bay-front campus in Manatee County.

USF is the only university in Florida to be selected by the Carnegie Foundation for the Advancement of Teaching's new Community Engagement classification.

The National Science Foundation announces that USF ranks 63rd among the nation's top research universities, according to a survey of federally financed research and development expenditures at universities and colleges in 2006.

The new Phyllis P. Marshall Student Center opens to the public. As the hub of student life on the USF Tampa campus, the center features an expanded dining center, food court, a 1,200 seat ballroom, meeting spaces and lounges. 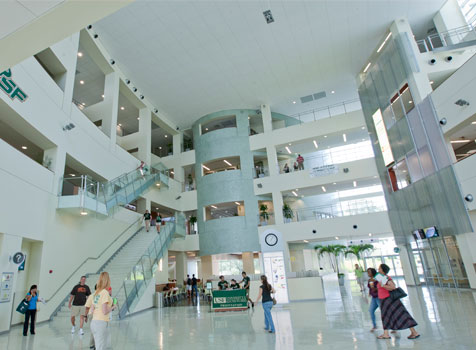 USF Health opens the Carol and Frank Morsani Center for Advanced Healthcare, the first ambulatory health center in the country built from the ground up around quality, service and technology, where the patient is the center of the health care system.

USF becomes the first university in the country to strike an accord with the Department of Veterans Affairs to offer special services for veterans taking advantage of the new GI Bill, called The Office of Veteran Services on Campus. 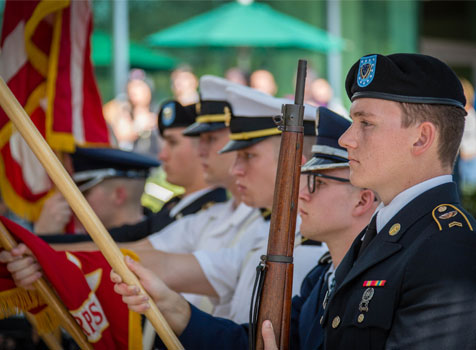 USF kicks off the USF: Unstoppable Campaign, a comprehensive fundraising effort by the University of South Florida to celebrate the energy, vision and future of one of the country's most exciting and engaged universities. 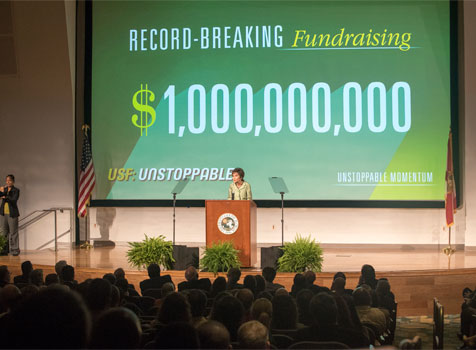 The university's athletics center is renamed in honor of Lee Roy Selmon, the first athletic director at USF, after he passes away. 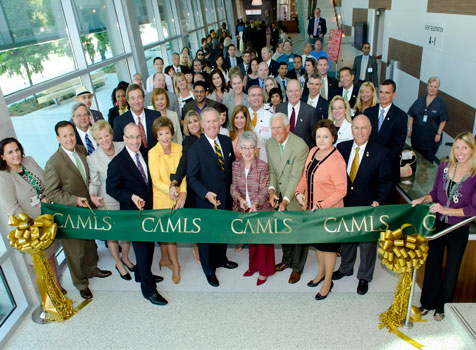 In the 2014 edition of the U.S. News & World Report’s Best Colleges, USF is ranked 14th as an ‘up and coming’ university among the country’s national universities.

The University of South Florida moved up to No. 43 in the federal government’s ranking of research spending among both public and private institutions.

Longtime USF supporters Pam and Les Muma give $25 million, the single largest individual gift in the university's history, to the USF College of Business.

Researchers across the University of South Florida System set a new record of $440,577,680 in research grants and contracts in the 2014-15 academic year.

The University of South Florida ranks among the nation’s top 50 best values in public higher education for 2016, according to a new list by Kiplinger’s Personal Finance.

The Florida Board of Governors designates USF as the state’s first “emerging preeminent university,” recognizing its strong trajectory toward national prominence. 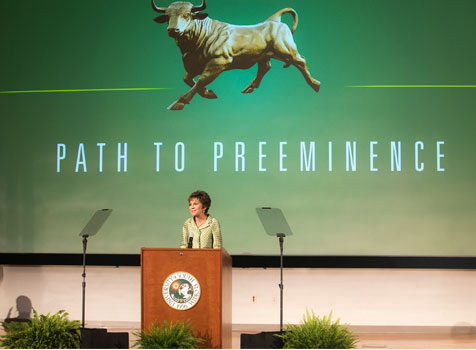 USF is recognized as the top university in Florida – and #6 in the nation – for eliminating the completion gap between black and white students.

The Chronicle of Higher Education recognizes USF Tampa as the nation’s leader among public universities in showing the greatest improvements in six-year graduation rates, from 2011 to 2015.

The Education Trust names USF the top public university in the nation for Latino student success.

Governor Rick Scott signed the Florida Excellence in Higher Education of 2018, requiring the USF System and its three campuses to consolidate accreditations under one umbrella by July 1, 2020.

The university achieves Preeminent State Research University Status, as designated by the Florida Board of Governors. 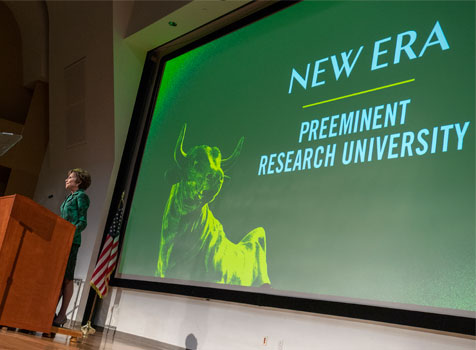 USF is awarded a chapter of Phi Beta Kappa, the oldest and most prestigious national honor organization in the country. 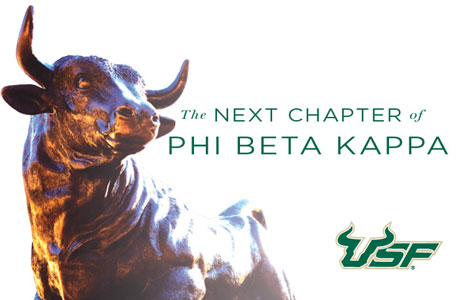 USF System President Judy Genshaft announces her retirement. After 19 years at the helm of the university, President Genshaft will retire effective July 1, 2019. 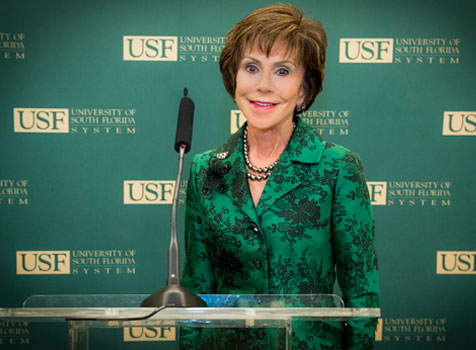 The University of South Florida ranks 25th among public universities for research spending and 42nd among all universities nationally. 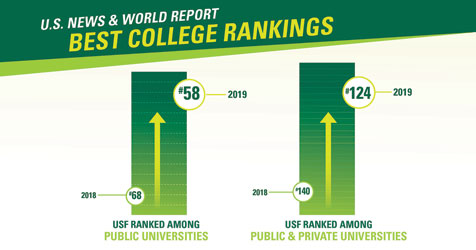