Each spring for the past 47 years, the College of Engineering and surrounding areas at USF are transformed for one weekend into the university’s largest annual science fair – the USF Engineering Expo.

This year, the two-day event attracted about 15,000 guests between February 16 and 17, including K-12 students from more than 100 schools throughout Florida. Engineering Expo aims to get Florida schoolchildren excited about a variety of STEM concepts and introduce them to different engineering disciplines. 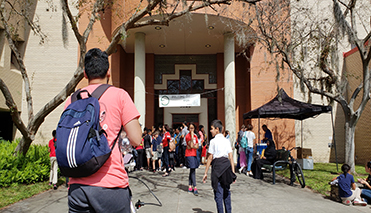 K-12 students and USF student volunteers arrive at the College of Engineering for the start of the 47th annual Engineering Expo.

Dozens of student organizations and community partners like TECO, Lockheed Martin, MOSI, and Jabil ran 56 exhibition stations filled with unique experiments and exhibits for guests to watch and interact with.

Exhibits ranged from Van de Graaff generators and a demonstration of elephant’s toothpaste to a simulation of a disaster response robot and an interactive flight simulator. Exhibitor stations could be found in clusters from the USF Connect research park near USF’s main entrance to the Interdisciplinary Sciences Building at the heart of campus.

The event also featured interactive presentations, a series of electric car races, guest speakers and shows. One of the most popular student-run shows, organized by USF student organization X-Labs, invited 200 guests at a time to watch a handful of electrifying experiments, including a live Tesla coil musical performance. 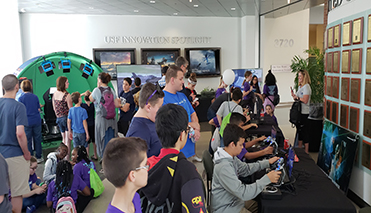 Guests take the flight simulations at Lockheed Martin’s Engineering Expo exhibit for a spin at the USF Research Park.

The event also featured interactive presentations, a series of electric car races, guest speakers and shows. One of the most popular student-run shows, organized by USF student organization X-Labs, invited 200 guests at a time to watch a handful of electrifying experiments, including a live Tesla coil musical performance.

“I can see the kids and ask them, ‘What’s your favorite part of Expo?’ or, ‘What was the best exhibition you saw?’” she said. “I can also encourage them to be engineers. I’ve asked a couple of them, ‘Do you want to be an engineer when you grow up?’”

Aderibigbe said it’s important for today’s younger generation of students to have the opportunity to be introduced to STEM fields, explore possible career interests and get the chance to ask college students what it’s like to attend a university. She said there were no opportunities for her to learn about college life or engineering careers when she was in grade school, so she wanted to help Florida’s K-12 students explore the idea of attending a college engineering program through exhibits at Expo. 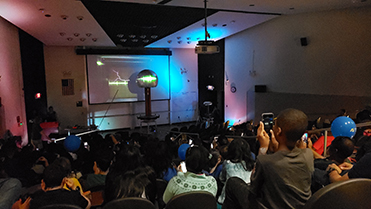 “Also, it’s good because USF students can know, ‘I helped this kid out with this,’ or, ‘I taught this kid something,’” Aderibigbe said. “There’s actually a student in charge of X-Labs this year who was a child that came to Expo with his dad when he was younger, and now he goes to USF.”

Rosemar Hernandez Suero, an 8th grader at K-8 Tampa public charter school New Springs Schools, said that watching the USF Engineering Medical Society’s demonstration of a laser that could pop balloons and leave behind a cloud of colorful smoke was “the coolest thing I’ve ever seen.”

She said coming to Expo also reinforced her thoughts of someday becoming a biomedical engineer but that she also liked meeting exhibitors and learning about the different careers she could pursue through engineering.

“A bunch of people here have provided solutions to problems that … could help humanity push forward,” she said. “I want to make a change.”

New Springs Schools had its own student-built experiments at Engineering Expo, including a demonstration of physics with inertia beads and DNA double helix models. First grade New Springs School teacher Brenna Wonsey said she hopes her school will return each year to table at future expos. 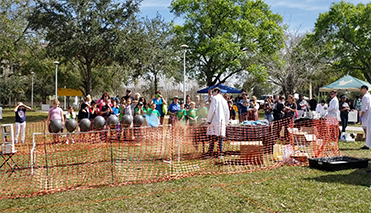 The USF Engineering Medical Society uses a thermal laser to burst black balloons filled with colorful powder in one of the club’s six exhibits at Engineering Expo.

“We’re a STEM school, so we feel like STEM education is very important, and we wanted to bring that into the community and show ourselves off,” Wonsey said.

She said that while students’ curriculum includes a weekly STEM class and that students can join the school’s robotics team or compete in local STEM competitions like the Florida Science Olympiad, Engineering Expo shows students what engineers do on a day-to-day basis and connects STEM lessons students learn in the classroom with real-world examples.

“Here they get to see (STEM concepts) in a career setting,” she said. “We’ve had kids come up to our table today, do our experiments and literally say they want to be scientists now.”

One exhibit that students from the USF Biomedical Engineering Society (BMES) designed and built to inspire the next generation of engineers was an arm wrestling station featuring 3D-printed robotic arms. Students flexed their own arms, which turned their muscle contractions into electrical signals sent via electrodes to the robotic arms. Whoever flexed the hardest would find their robotic arm on top.

“You have to make sure that your presentation is quick because their attention span is usually not that long, and they want to go explore all these different (exhibits),” Mohamed said. “But you also want to make sure that you have something there that catches their attention. That way they get interested and listen to what you want to say, and it’ll be something memorable that sticks in their mind and will actually have an impact on them.” 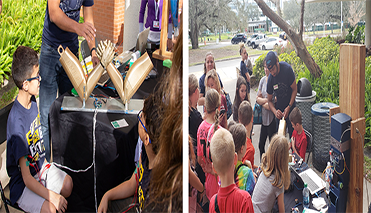 Mohamed, a Biomedical Engineering Ph.D. student, said he thinks it’s important for Bulls in student engineering organizations to get involved in Engineering Expo because of how much more students can get out of their clubs by participating.

He said the event not only brings different disciplines of student engineers together to work on a project but that the exhibits students create also build on what they learn in the classroom.

“The same signals we’re collecting (from the BMES exhibit) are used in the real world for veterans and amputees … to control a bionic arm,” he said. “That’s the medical application of the technology that we’re working with right now.”

Most rewarding, Mohamed said, is seeing all of the club’s hard work pay off by inspiring K-12 students to learn more about his engineering field.

“This is something that we all worked on together,” he said. “After all these months of preparing and building … our favorite part of Expo is seeing the kids get excited about the booth and get interested in this (engineering) program.”