One billion liters of seawater would be required to gather just 25 grams of iron, yet this trace element is essential to every form of life on the planet.

ST. PETERSBURG, FL – One billion liters of seawater would be required to gather just 25 grams of iron, yet this trace element is essential to every form of life on the planet.  A group of scarce but biologically important elements in the ocean, referred to as trace metals, can either limit the growth of organisms or be toxic, depending on the concentration.  Dr. Tim Conway has recently joined the College of Marine Science and brings a wealth of understanding of trace metals, in part due to extensive interaction with the International GEOTRACES program, a study of the marine biogeochemical cycles of trace elements and their isotopes.  As a cruise participant and data contributor to the NSF funded U.S. GEOTRACES program, Dr. Conway is intimate with the methods of collecting seawater for trace metal analysis and is instrumental in the creation of compiled products that are used by scientists around the world. 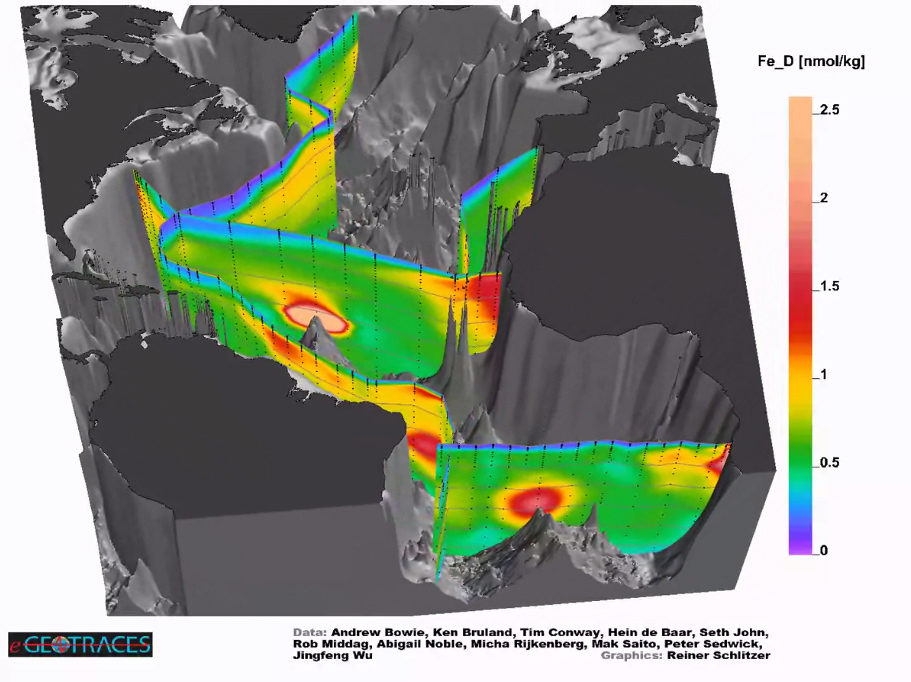 One of the marquee products of the GEOTRACES program is an electronic atlas of oceanographic profiles in the form of surface to bottom cross-sections that display changes in the concentration of a particular element along the entire path of ocean-traversing cruises.

Profile of dissolved iron in the Atlantic Ocean compiled from GEOTRACES cruise data, and available at eGEOTRACES.  Graphics by Reiner Schlitzer.

Dr. Conway’s upcoming projects include a cruise aboard the research vessel of the Angari Foundation, a non-profit organization dedicated to bringing together scientists and the public with the goal of widely communicating important ocean issues.  The cruise will sample the southern jet of the Gulf Stream, charting a course from Florida to the Bahamas.

Research is also underway to examine the role of circulation, biology, and islands on the distribution of metals and their isotopes in the waters around Antarctica.  The recently completed Antarctic Circumnavigation Expedition provides an abundance of data to be tackled by a collaboration of Swiss, Australian, and U.S. based scientists.

Changes in the concentrations of trace metals can have impacts on the environment and, in turn, on society.  Changes to land use can affect concentrations of dust blown iron in the oceans, which can act as a fertilizer to increase productivity of organisms at the base of the food chain.  Alternatively, changes in pollution levels can affect concentrations of trace metals and increase toxicity in areas.  As Dr. Conway notes, “[Trace metals] really can affect where things die and where things live in the ocean.”  Great strides have been made in recent years, and the exciting field of trace element chemistry is poised to provide very useful solutions to environmental challenges.