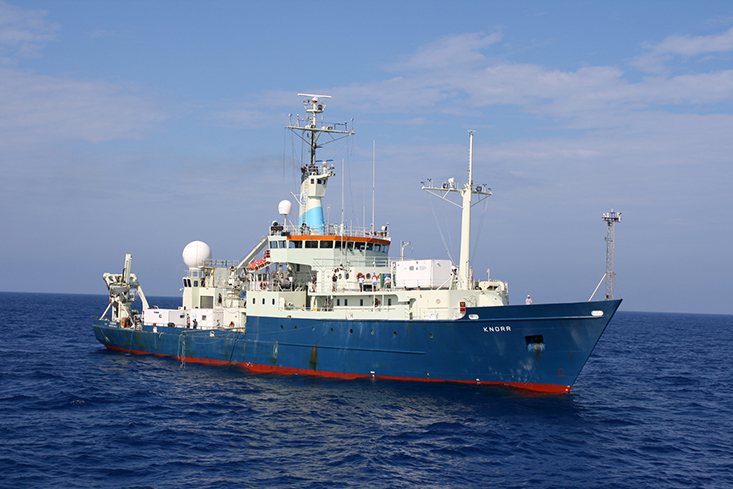 Using a new, highly sensitive tracer for human-derived iron falling on the ocean, researchers led by the USF College of Marine Science say we have underestimated the iron we add to the ocean compared to natural sources.

ST. PETERSBURG, FL – It’s no secret that massive dust storms in the Saharan Desert occasionally shroud the North Atlantic Ocean with iron, but it turns out these natural blankets aren’t the only things to sneeze at. Iron released by human activities contributes as much as 80 percent of the iron falling on the ocean surface, even in the dusty North Atlantic Ocean, and is likely underestimated worldwide, according to a new study in Nature Communications.

“People don’t even realize it,” said lead author Dr. Tim Conway, Assistant Professor at the USF College of Marine Science, “but we’ve already been doing an iron fertilization experiment of sorts for many decades.”

Burning fossil fuels, biofuels, and forests all release iron, which can be transported as an aerosol over large distances from land into the guts of the North Atlantic and beyond. But human-derived iron aerosols have been nearly impossible to see in the data – until now.  The team used the isotope ratios of iron in the atmosphere to ‘fingerprint’ whether the iron came from Saharan desert dust or human sources such as cars, combustion, or fires.

A new tracer for human-derived iron

“Despite much research, iron chemistry is still something of a black box in the ocean,” Conway said. Iron, a trace element, is found in exceedingly low amounts in the ocean; one liter of seawater contains 35 grams of salt but only around one billionth of a gram of iron. This makes it very hard to measure. The iron is also hard to sample without risking contamination, especially if working on a rusty ship.

Trying to establish how much atmospheric iron lands on and dissolves in the ocean presents even more challenges, with storms, seasons, and land use all changing how much dust gets blown from the continents. Digesting dust particles in the lab to see how much iron dissolves is also problematic, and has led to estimates of iron that dissolves when it hits the ocean ranging from 0 to 100 percent.

The current study addresses some of these mysteries that remain in iron chemistry, taking our understanding of atmospheric iron supply to the oceans to the next level. 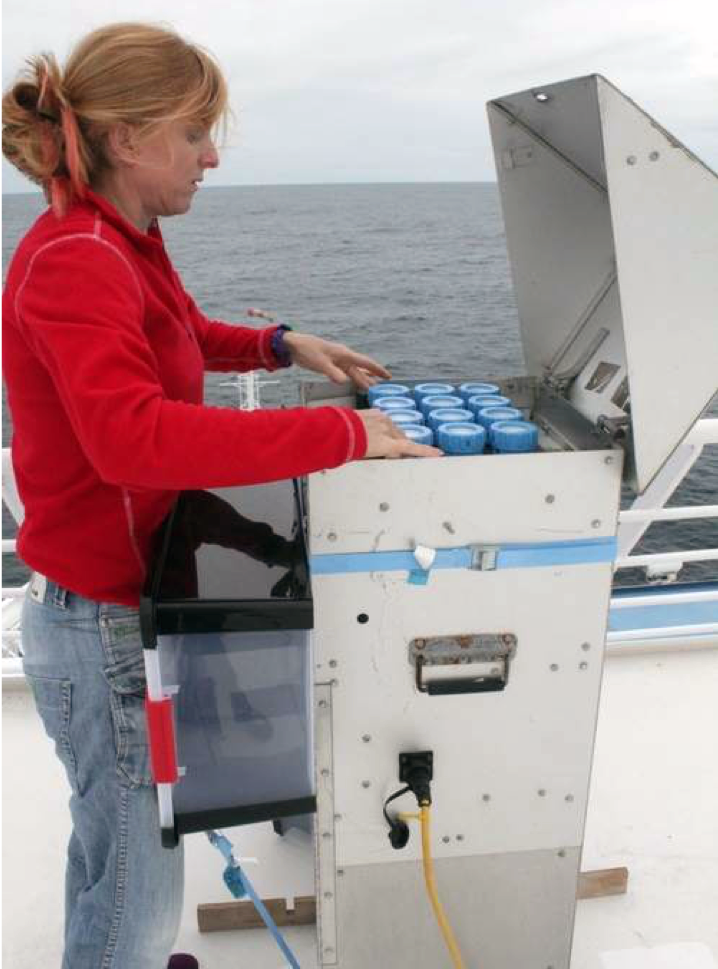 Dr. Rachel Shelley, a researcher at Florida State University and co-author of the Nature Communications study, sets up a dust collector used to capture aerosols on the R/V Knorr in 2010.

Conway and his colleagues analyzed aerosol samples collected on research cruises to the North Atlantic in 2010 and 2011 on board the R/V Knorr. The cruises were part of GEOTRACES, a global coordinated research program of 35 countries to study trace metals and their isotopes in the ocean.

Samples were taken from an area off West Africa known to collect dust from the Saharan dust storms, and the others were taken off the coasts of New England and Europe where human-derived pollution is expected to be more important. The team then measured iron isotope ratios in the samples in order to determine whether the iron came from a natural or human source.

Iron isotope ratios (56Fe/54Fe) can change in response to chemical reactions, so human-induced processes like burning fossil fuels release iron with a different isotope ‘signature’ than iron derived from natural materials. Saharan dust particles were previously assumed to have a ratio that looked like the average continental crust, and Conway has suggested that when Saharan dust particles hit the ocean, the iron that dissolves interacts with organic molecules that bind the heavier 56Fe.

“We carried out this research to investigate that idea and fully expected to see continental signals or perhaps more heavy isotopes in the samples from all three regions,” said Conway. “What we found was pretty crazy and very light. We weren’t expecting this at all,” Conway said. 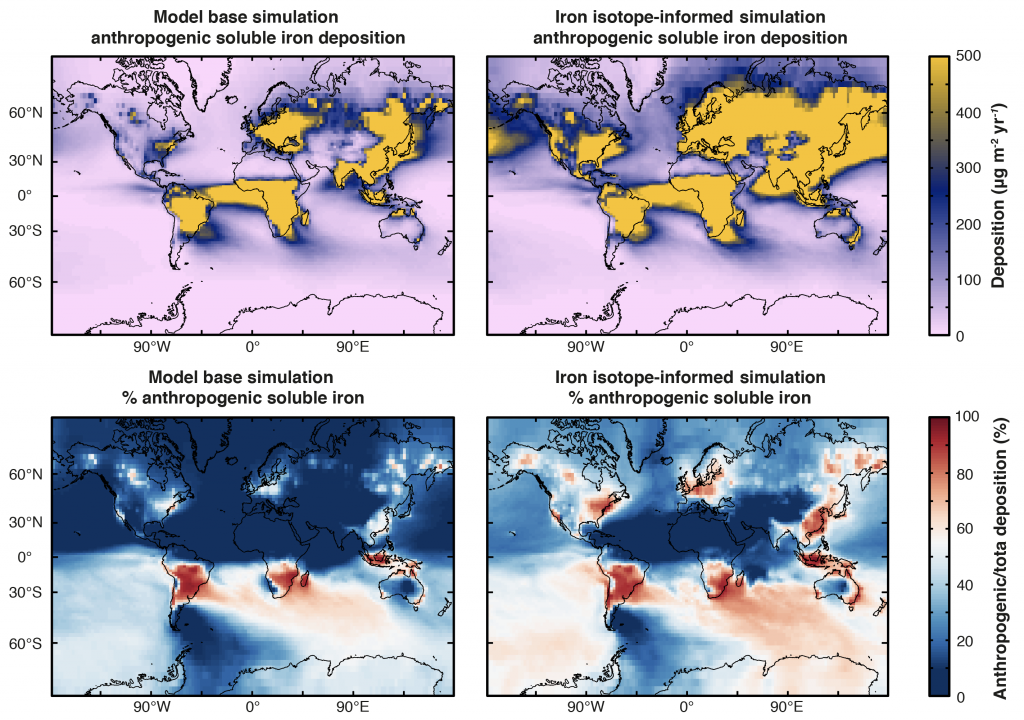 The work by Conway and others showed that scientists have significantly underestimated the amount of human-derived iron aerosols to the North Atlantic Ocean compared to natural-derived iron aerosols from Saharan dust storms. Right hand panels show the updated model scenarios (left show the originals). As seen in the new panels, many more areas are deep orange, indicating up to 80% iron deposition from human sources such as fossil fuels, biofuels, and fires, especially to the iron-limited Southern Ocean region.

The iron in Saharan air was indeed a match for the continental crust, but was much heavier than the samples from North America and Europe, which were loaded with lighter (more 54Fe), human-derived iron – not iron from the Sahara.

“The fact that we found human-derived iron in the dusty North Atlantic shows how effective this tracer is for anthropogenic iron,” Conway said.

Next, they used the iron-isotope tracer work to improve the models used to predict the amount of dust that falls over the global ocean, and were able to show that the iron from human input is much greater than previously thought.

Since the 1990s scientists have proposed the idea of fertilizing the water with iron released from ships to accelerate the growth of phytoplankton. The thinking goes like this:

Iron is a vital micronutrient that phytoplankton need to grow but it’s generally scarce in the ocean. When available via dust storm or other source, the phytoplankton slurp up the carbon dioxide during photosynthesis at the ocean’s surface. When they die and sink to the ocean bottom, they take the carbon with it – effectively acting as a “carbon sink.” So let’s add more iron to decrease the carbon dioxide from climate change, say geoengineering enthusiasts. 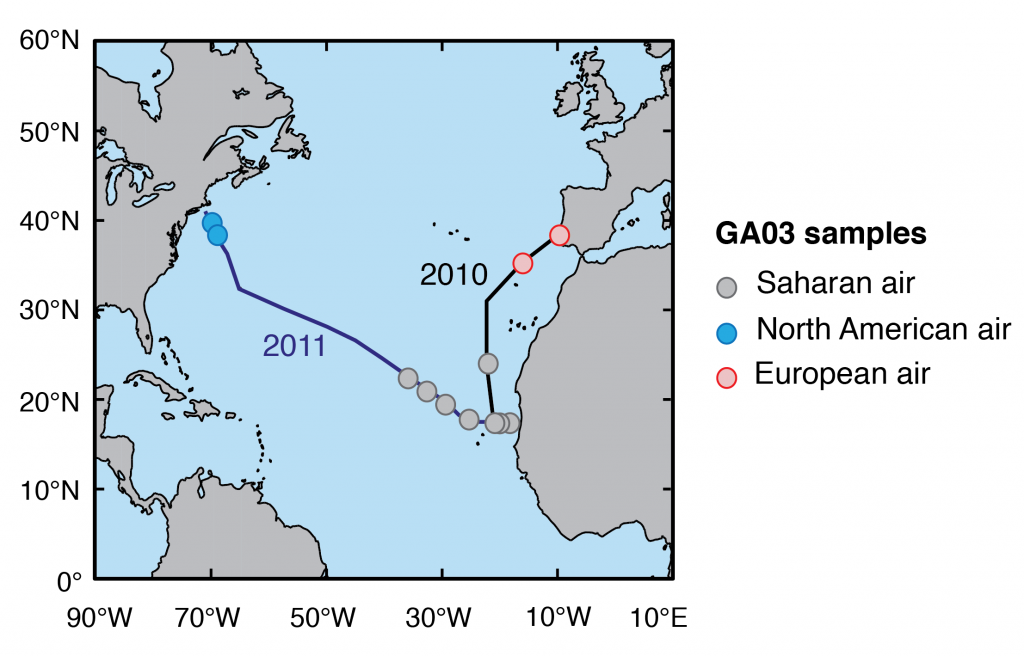 Map showing the sampling locations in the North Atlantic Ocean in 2010 and 2011.

This geoengineering exercise is still hotly debated today, and the study by Conway and team add fuel to the fire with an unexpected twist.

“It seems we’ve already been fertilizing the ocean. We just couldn’t quantify it,” Conway said, although scientists have had a hunch about the human iron input since the mid-2000s.

“We’ve completely changed the system,” he said, and routinely add iron to the ocean when cutting down forests or driving cars. Ironically, because of the way iron works it’s therefore possible that these human sources of iron to the ocean may in fact have been acting to mitigate climate change.

“We don’t know the magnitude of it yet but it’s a fair statement,” Conway said.