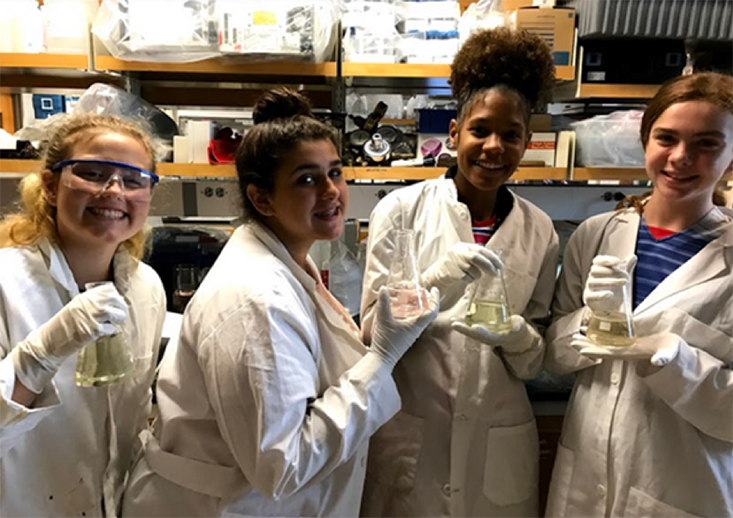 Life in the ocean comes in many sizes, even sizes too small for the human eye to see (microscopic sizes). The first goal of day one of the marine chemistry lab rotation was for campers to understand how microscopic, light-dependent organisms (called phytoplankton) at the base of the marine food chain obtain the iron (Fe) they need to grow. Even though Fe is an essential nutrient, it is present at low concentrations in seawater. Therefore, phytoplankton have developed some adaptive strategies to obtain Fe, including taking up the Fe trapped by ligands (molecules that bind to a metal) in seawater. To see Fe-ligand reactions in action, campers performed an experiment involving tea (which contains tannin, an Fe-binding ligand) and steel wool (which is made of Fe). Rust (Fe oxide) forms when Fe interacts with oxygen (O2) and water (H2O). The goal of this activity was for campers to understand why steel wool did or did not rust in solutions of air, water, vinegar, and tea.

After learning about the importance of chemistry to marine life, the campers then started to think about how humans impact marine chemistry. They conducted an oil spill simulation to identify different types of oil spills, understand where the oil and its chemical components spread, identify ways to clean up the oil, and evaluate how the cleanup process might affect the marine ecosystem. To further emphasize the impact of humans on marine chemistry, the goal of day two was to then have some pHun learning about pH. Campers learned different ways to measure pH, what factors influence pH, and how the pH of seawater affects marine life.

During the oil spill simulation, William was created out of aluminum foil to sail the Gulf of Mexico in one of the oil tankers. At risk of drowning during the spill, she was swiftly rescued and dubbed an honorary Oceanography Camp for Girls lab member!

During the pH section, campers competed in a respiration race. Each camper received a water sample and added pH indicator dye to it. The race objective: to change the sample pH (as shown by the indicator color) the most in two minutes by blowing into it through a paper straw. When humans breathe out (respire) carbon dioxide (CO2) is produced. When CO2 and H2O interact, hydrogen ions form. The presence of more hydrogen ions in a solution decreases its pH, making the solution more acidic. So, blowing bubbles into water decreases its pH. As the lab counter turned into a splash zone, the campers quickly caught on that those with seawater were automatically at a disadvantage compared to those with pure water. Seawater has a carbonate buffering system, which means that it is more resistant to changes in pH when CO2 is introduced than pure water. So, the competition was rigged all along!

Through a model demonstration, campers learned how some marine bacteria produce Fe-binding ligands called siderophores (cut PVC pipes) that capture iron (ping-pong balls) in the sunlit zone of the water column (plinko board). Phytoplankton can then use the captured iron to make their own food during a process called photosynthesis. As a by-product, phytoplankton end up producing half the oxygen in the air we breathe!
Although chemical dispersants are effective at breaking up oil floating on the surface of seawater, the long-term effects of distributing these oil droplets into the water column on life underwater is not well known.
When enough CO2 enters from the atmosphere, seawater will become more acidic, despite its efficient buffering system. Rapid ocean acidification is harmful for sea creatures that depend on a stable pH range to form their calcium carbonate body parts. Therefore, humans should be careful about releasing CO2 into the atmosphere at a rate too fast for sea life to adapt. 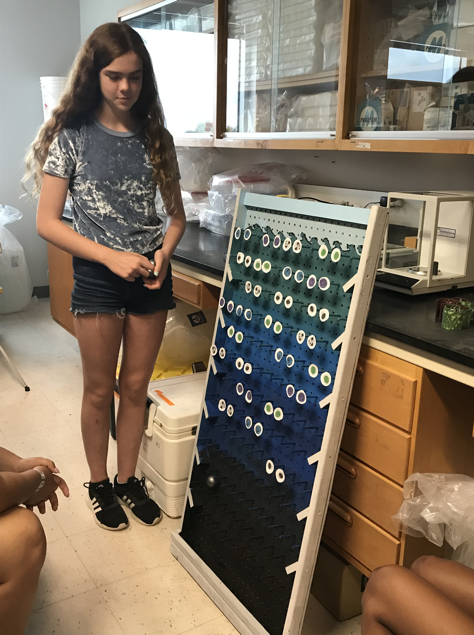 Sophia acting as an Fe source (dust) during the siderophore demonstration. As seen in the picture, when there are no siderophores produced by bacteria, the Fe does not stay in the upper water column within reach of phytoplankton. Photo credit: Casey. 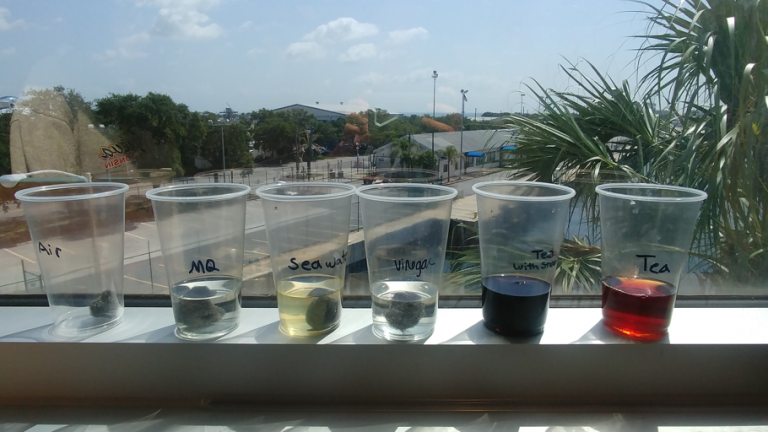 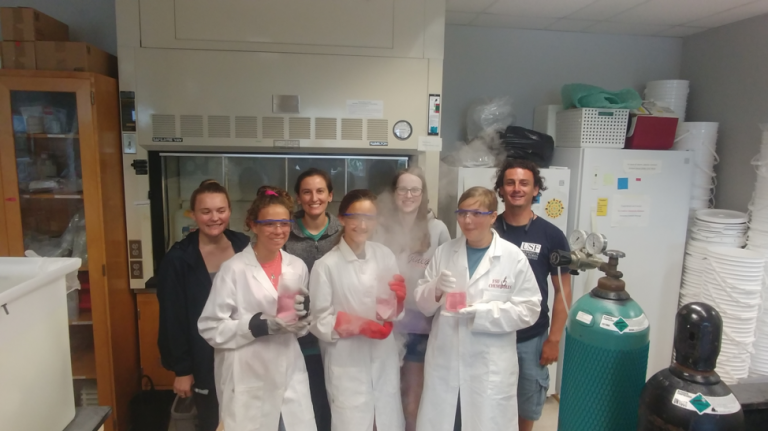