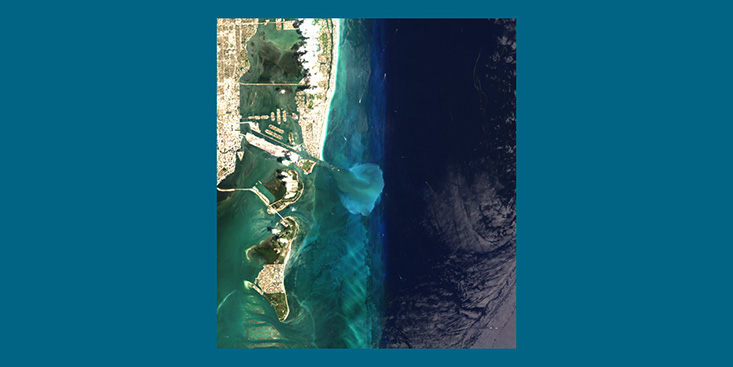 Landsat-8 image of the Port of Miami and surrounding waters from April 24, 2014, showing the size and location of the sediment plume. Photo Credit: Brian Barnes / USGS

MIAMI, FL – A team of researchers published findings this week that reveal significant damage to Miami’s coral reefs resulting from the dredging at the Port of Miami, which took place from 2013 to 2015. Using data collected by environmental consultants during the project, the authors found that large amounts of dredging sediment buried 50-90% of nearby reefs, resulting in widespread coral death. The results, published in the journal Marine Pollution Bulletin, estimate that over half a million corals were killed within 0.5 km of the dredged channel, and that dredging impacts may have spread across 25 km of Florida’s reef tract.

For the study, researchers reanalyzed data from a monitoring program that had attributed most of the documented coral losses in the area to a region-wide outbreak of coral disease that occurred at the same time. This new study controlled for these impacts by looking at losses of coral species that were not susceptible to the disease and by testing whether corals closer to the dredge site were more likely to die during the dredge period than those further away.

“It was important to differentiate these multiple impacts occurring on the reefs to understand the direct effects of dredging specifically,” said Dr. Ross Cunning, research biologist at the Shedd Aquarium in Chicago, and lead author of the study. “We brought together all the available data from satellites, sediment traps, and hundreds of underwater surveys. Together, the multiple, independent datasets clearly show that dredging caused the major damages observed on these reefs.” 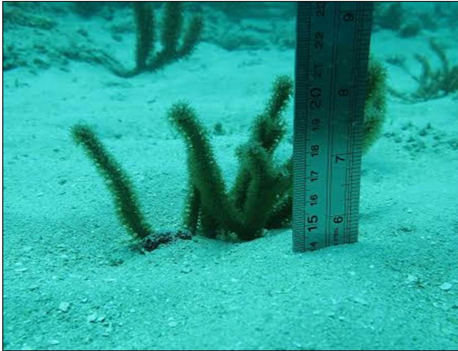 A seawhip buried in 14 cm of sediment on the inner reef near the Port Miami dredging. Like stony corals, seawhips anchor to exposed rock, and cannot live under sediment. Photo Credit: NOAA/NMFS

The researchers also studied whether sediment plumes – milky clouds of suspended dredging sediment visible from space – could predict impacts observed on the reefs below. The authors found that plumes detected using satellites had a remarkably high correlation with impacts documented on the seafloor. This is the first study to show that satellite data can be reliably used to predict dredging impacts on corals and their habitats.

“This connection allowed us to predict impacts beyond where ship-based monitoring was taking place, and showed that dredging likely damaged this reef several kilometers away,” said co-author Dr. Brian Barnes of the University of South Florida. “While this same relationship may not apply in all projects, this is a remarkable finding that further establishes Earth-observing satellites as independent monitoring tools to fill in gaps where data are otherwise not available.”

Florida’s reef tract is the only nearshore reef in the continental United States, and coral cover has declined by at least 70% since the 1970’s. Staghorn corals, which were once common in shallow water, have declined an estimated 98% and are now threatened species under the Endangered Species Act. The affected areas adjacent to the dredge site are of high conservation value and have been designated as “critical habitat” for the recovery of these threatened staghorn corals. 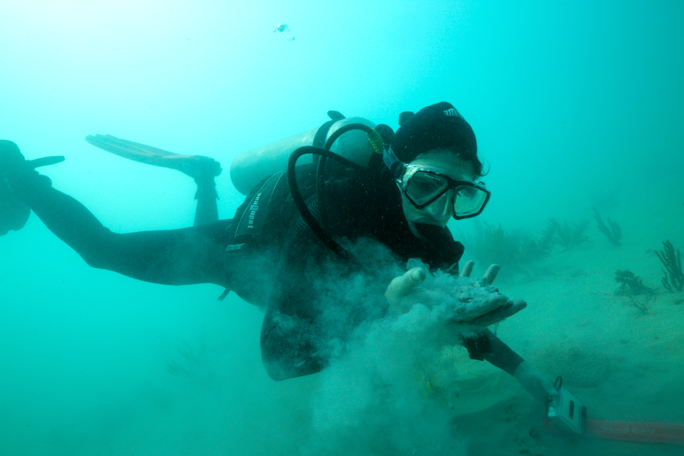 “This study provides a clear and scientifically robust estimate of the impact of this dredging project on Miami’s coral reef resources. It tells a devastating story of loss that we cannot afford to ignore any longer,” said Dr. Rachel Silverstein, Executive Director and Waterkeeper of Miami Waterkeeper, and co-author of the study. “We hope that these findings will provide valuable information to guide restoration of the impacted reefs and prevent these kinds of impacts in the future.”

“Coral reefs worldwide are facing severe declines from climate change,” said Dr. Andrew Baker, Associate Professor of Marine Biology and Ecology at the University of Miami Rosenstiel School of Marine and Atmospheric Science, and senior author of the study. “If we want to conserve these ecosystems for the generations that come after us, it’s essential that we do all we can to conserve the corals we still have left. These climate survivors may hold the key to understanding how some corals can survive global changes. We have to start locally by doing all we can to protect our remaining corals from impacts, like dredging, that we have the ability to control or prevent.”

Miami Waterkeeper is a South Florida-based non-profit. Our mission is to protect South Florida’s watershed through citizen engagement and community action, ensuring swimmable, drinkable, fishable, water for all. Through our work, we hope to ensure clean and vibrant South Florida waters and coastal culture for generations to come. www.miamiwaterkeeper.org

Disclosure: Miami Waterkeeper was involved in litigation against the Army Corps of Engineers for Endangered Species Act violations during the Port Miami “deep dredge” project, and is involved in current litigation over the planned Port Everglades dredging.

The John G. Shedd Aquarium in Chicago sparks compassion, curiosity and conservation for the aquatic animal world. Home to 32,000 aquatic animals representing 1,500 species of fishes, reptiles, amphibians, invertebrates, birds and mammals from waters around the globe, Shedd is a recognized leader in animal care, conservation education and research. An accredited member of the Association of Zoos & Aquariums (AZA) and the first U.S. aquarium to be awarded the Humane Conservation™ certification mark for the care and welfare of its animals by American Humane, Shedd is also an affiliate of the Smithsonian Institute, and is supported by the people of Chicago, the State of Illinois and the Chicago Park District. www.sheddaquarium.org

The University of South Florida College of Marine Science (www.usf.edu/marine-science/), founded more than 50 years ago in 1967, is one of the top ten marine science programs in the country. Offering Ph.D. and M.S. degrees, it leverages an annual research budget of about $20 million to foster innovation and understanding in biological oceanography, physical oceanography, geological oceanography, chemical oceanography, and marine resource management. The USF College of Marine Science (USF CMS) is also a leader in the public understanding of science, and has been the lead institution of global research program developed in response to the Deepwater Horizon oil spill, the largest in history. It serves as a major research and economic engine for the St. Petersburg Innovation District and sits at the heart of one of the largest marine science hubs in the country that also includes the USGS St. Petersburg Coastal and Marine Science Center, the NOAA National Marine Fisheries Service, the Fish and Wildlife Research Institute, the Florida Institute of Oceanography, SRI International, the Tampa Bay Estuary Program, and the US Coast Guard.