One Piece at a Time 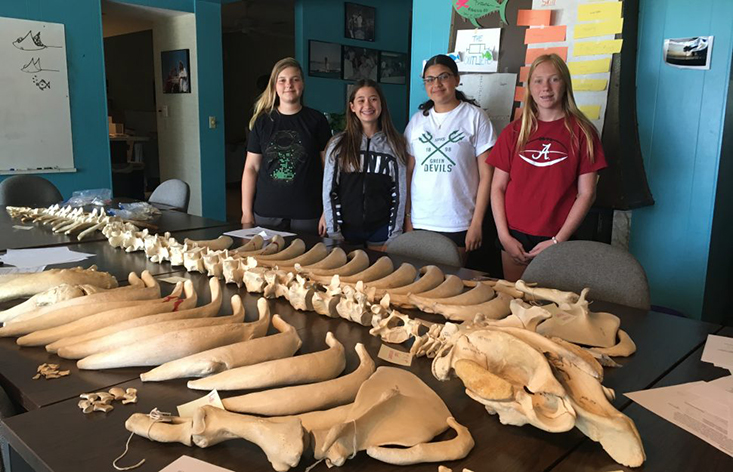 There was a buzz in the room as the girls scurried about like worker bees, with odd shards of white in their hands. To an onlooker it may have looked like the girls were wielding abnormal batons, but in reality, they were carrying around the remains of Tiffaney the manatee. Tiffaney’s skeleton belongs to the FWC Marine Mammal Pathobiology Lab, which lends out bones for education purposes. Tiffaney’s skull was placed on the table, quickly followed by colossal ribs that were misshapen from boat collisions. Soon after these damaged ribs were separated by the gargantuan vertebrae that made up Tiffaney’s spine and tail. 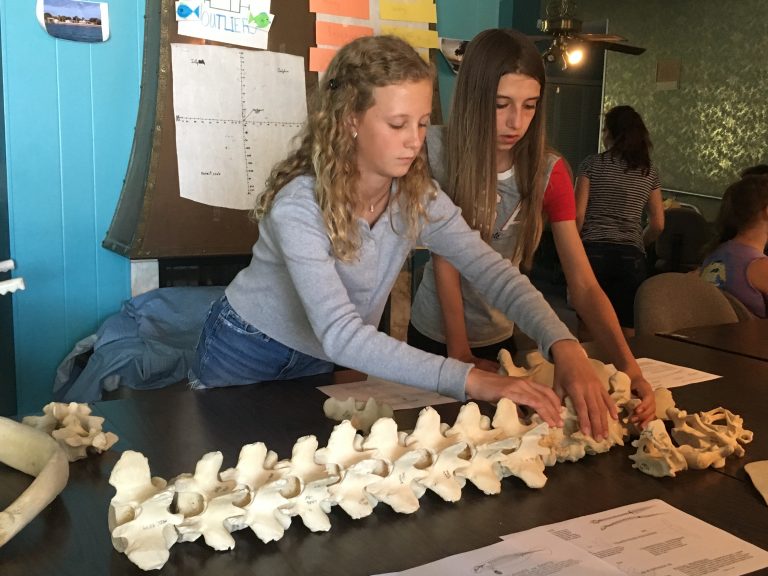 Before we could reassemble Tiffaney we discussed with the campers the literal ins and outs of manatees, as well as why it was so important to protect and conserve Florida’s West Indian manatee. Due to their small population, these slow gentle giants are susceptible to all types of harm ranging from watercraft to cold stress. During our lab these campers had to find a way to put Tiffaney back together, all the while playing detective in order to determine her story. To truly understand her, the girls needed to know Tiffaney’s migration patterns and not only her fate, but the fate of her children as well. Some of this information could be gleaned with her backstory, while the rest required skilled investigation of her bones. These campers studied Tiffaney’s assembled ribs lain before them and worked hard to discover her cause of death. The ribs were held together with a deep red adhesive following a necropsy, highlighting the extensive damage. For our campers, damage this severe could have only had one cause – a fatal collision with a passing watercraft. As the girls observed Tiffaney’s skeleton, they stared pensively at her remains and wondered how such a tragedy could have been prevented. As each bone was put into place these girls not only gained a passion to understand, but also to protect those that cannot protect themselves. In this case, the humble sea cow.

During our lab we were fortunate enough to have five (including one baby) living manatees come visit us by the dock of the Clam Bayou Marine Education Center. It could not have been better timing! Each manatee had severe scaring from encounters with watercrafts. Did you know that 25% of manatees die from watercraft collisions? As sad as this is, it made for a great teaching moment and helped the girls understand just how much humans are affecting these marine mammals.