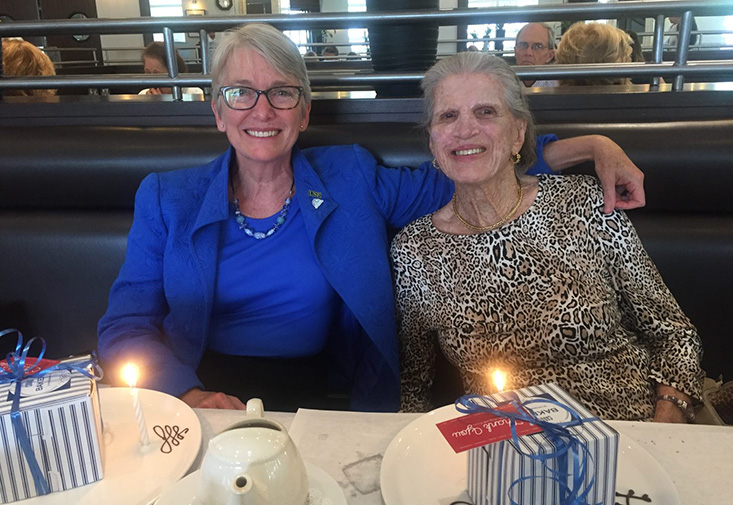 Anne and Werner Von Rosenstiel’s philanthropic footprint in the USF College of Marine Science and indeed in the entire city of St. Petersburg, is quite simply incomparable.  Over the course of more than three decades, Anne always expressed a genuine interest in the graduate students of the College of Marine Science and was always excited to listen to, and learn from, the students and their research. Anne’s generosity and keen interest in the graduate students she supported has truly formed a cornerstone in our program.

In my nine years as Dean in the College of Marine Science, I witnessed firsthand the remarkable impact her gifts made in the lives of the highly accomplished graduate students who received The Von Rosenstiel Fellowship in Marine Science.  This fellowship significantly advanced our graduate program, allowing us to attract the most capable students internationally. These fellows have been able to focus on their research without financial concern as a result of their generous fellowships.  They have gone on to make important discoveries and to pursue scientific research that will affect the very survival of our planet.

Anne’s generous gifts to our Bridge to the Doctorate Endowed Graduate Fellowship is helping our college to address the severe national shortage of minority scientists by making it possible to recruit and mentor under-represented minority students.

In the wider community, Anne helped transform Bayboro Harbor from what was once St. Petersburg’s eyesore to what has become its crown jewel – featuring beautiful new buildings along with the highly acclaimed intellectual, scientific and journalistic tenor of the area. An important turning point for the entire state occurred in 1988, when the United States Geological Survey (USGS) selected St. Petersburg as the home for its National Coastal and Marine Science Center. During a dinner sponsored by our business community for the USGS review team, part of a letter written by Anne and read aloud underscored her commitment to an endowment in what was then the Department of Marine Science. This marked the first time USF was involved in a national competition and the endowment pledged by Anne and others contributed to USF’s victory.

Anne also volunteered for the St. Petersburg Free Clinic for many years and had a special heart for children and families. Her gifts have made an immeasurable difference in the lives of thousands of our neighbors in need, and she was one of the first to support the Humane Society of Tampa Bay’s new facility for homeless animals.

Then there is the immense impact she had on the Academy Prep Center of St. Petersburg. She endowed the social studies chair – the only time that has happened in the school’s 20-year history. And her support ensures that low-income students living in St. Petersburg receive an exceptional, private education preparing them for academic success at the next levels.

In lieu of flowers, the family requests that memorial donations may be made payable to USF Foundation in memory of Anne P. Von Rosenstiel to The Anne and Werner Von Rosenstiel Endowed Research Fund in Marine Science (Fund 266002) at the Office of Donor Relations, 4202 E. Fowler Ave, ALC100, Tampa, FL 33620, Attn: Beth Corbin or online at giving.usf.edu.

I am deeply honored to have been able to call Anne my friend. I am grateful that we were able to share time together with students and at community events. I am humbled that Anne was part of the USF family. Her legacy, along with Werner’s, will continue in perpetuity at USF and the College of Marine Science.  She will be greatly missed.