Back at Sea, FINALLY! 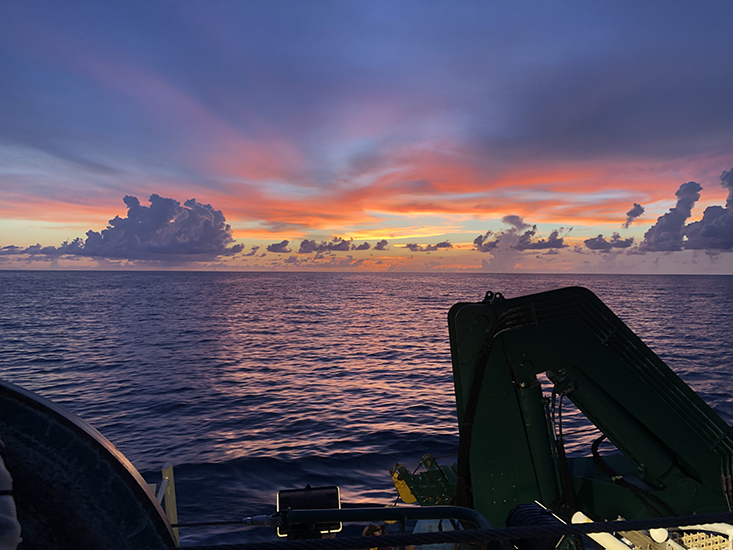 After several months of COVID delays, the Ocean Circulation Lab recently headed out to service USF Coastal Ocean Monitoring and Prediction System (COMPS) moorings.  The first CMS research cruise since the start of the pandemic, this three-day trip covering almost 400 nautical miles aboard the Florida Institute of Oceanography’s R/V Weatherbird II was the culmination of months of planning and hard work, not to mention a few uncomfortable pre-cruise nasal swabs!  The cruise track brought us to the southern limit of the West Florida Shelf (WFS), servicing two COMPS research  buoys that provide real time, surface meteorology and ocean currents data using satellite telemetry and one bottom mounted current meter while taking FWC red tide samples along the way.  As a component of Distinguished University Professor Bob Weisberg’s WFS circulation research this work is funded by the NOAA-IOOS (SECOORA) Program, the National Academy of Sciences and Medicine (NASEM) and the State of Florida. 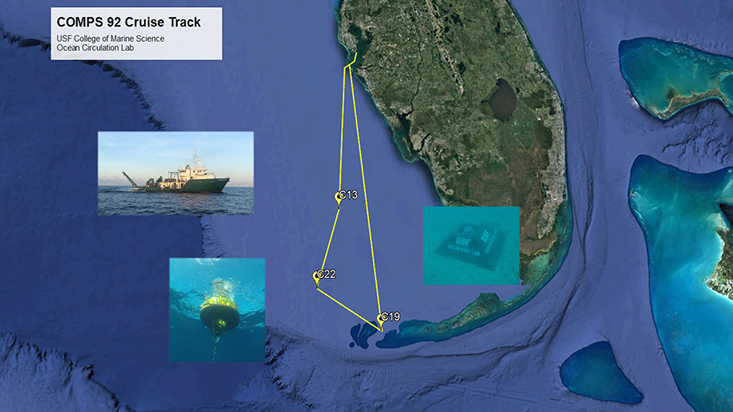 With 11 negative COVID tests in hand, we finally got the green light to load the boat and with lots of help from the Weatherbird crew, we were ready to sail in short order.  After a quick send-off from new CMS Dean Tom Frazer (welcome!) and Associate Dean Gary Mitchum, we cast off lines and put all land-based concerns and stresses behind. 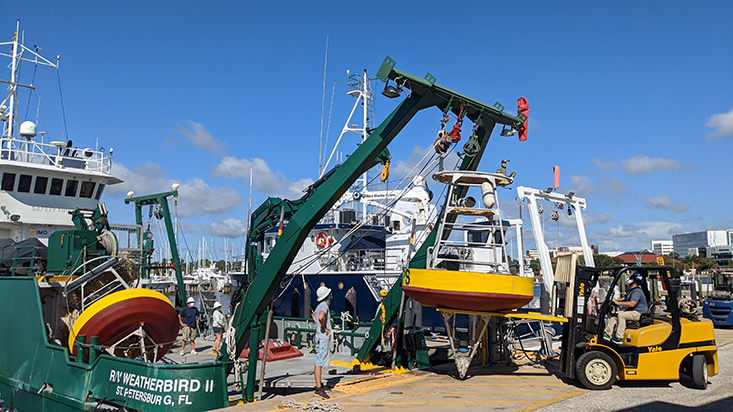 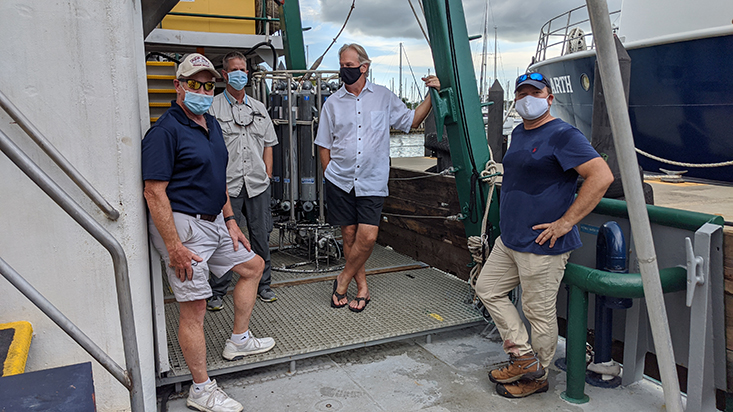 Calm seas and a beautiful sunset greeted us offshore.  After months of oppressive pandemic stress, taking a minute to enjoy another amazing Gulf of Mexico sunset, with the gentle rumble of the big diesels carrying us south, brought a profound sense of relief and normalcy. 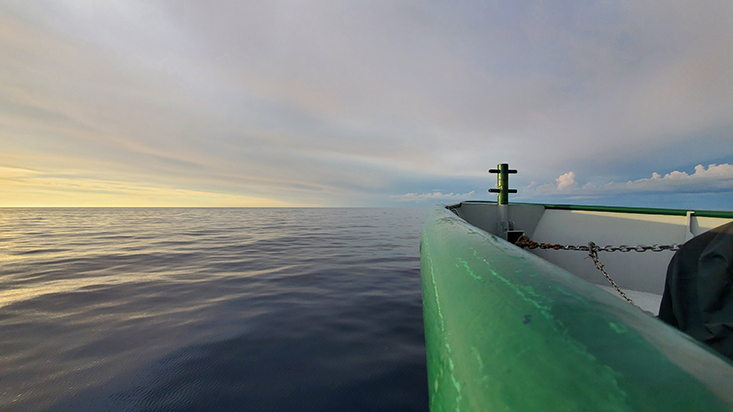 After a late night of prepping the deck for buoy operations, we started work early at our C13 research buoy, which is funded through the NOAA-IOOS South East Coastal Ocean Observing Regional Association (SECOORA).  We deployed this buoy last summer, and it was certainly in need of a swap out before the worst of hurricane season.  With a socially distanced breakfast complete, our first order of business was to jump on the old buoy, remove the wind sensors, and prep the buoy for recovery.  With that done we were ready to deploy the new buoy—thankfully with an excellent crew and calm seas. Within a few short hours, the new buoy was transmitting data.

Off to the next station: the C22 Pressure Point mooring. 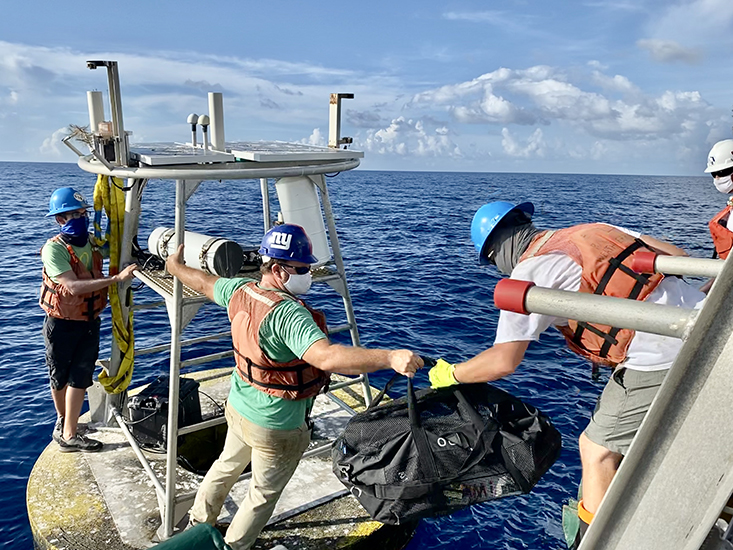 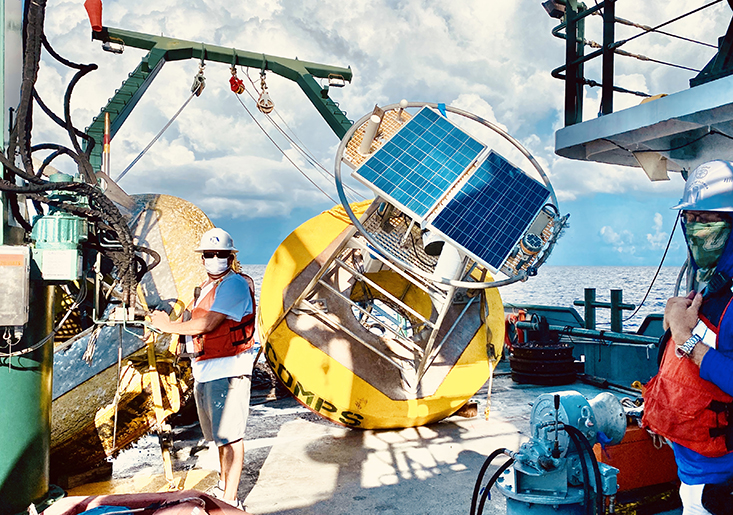 With the old C13 buoy secured for transit, we started prepping for the C22 buoy six hours away.  After a few hours of hauling anchor chain around the deck and triple-checking sensors and hardware, the sweaty science party took a well-deserved break and enjoyed some AC in their cabins.  Similar to C13, the C22 mooring has a full suite of surface met sensors (wind, relative humidity, air temperature, barometric pressure), an ADCP measuring current profiles and three CTDs measuring temperature and salinity.  Funded through the NASEM Understanding Gulf Ocean Systems Program, C22, referred to as the Pressure Point Mooring, is situated (on the 70-meter isobath northwest of the Dry Tortugas) to better understand the behavior of the Gulf of Mexico Loop Current, how the Loop Current affects the WFS and, in turn, how the WFS affects the Loop Current.  Loop Current interactions with the shelf slope near the Dry Tortugas can set the entire WFS in an upwelling favorable motion that brings new nutrients onto the shelf while also creating shoreward transport pathways.  Once this occurs it becomes difficult for the Loop Current to detach itself from the pressure point region. With 14 months of invaluable data on the barnacle-encrusted instruments, the entire Ocean Circulation Lab was anxious to get the mooring back to USF-CMS.

As with C13, the C22 evolution was flawless.

A buoy recovery and deployment requires the coordinated use of the main winch, A-frame, crane, and a large tugger winch capstan -- with heavy loads controlled via tag lines by the science party and crew.  First order of business is getting the new system deployed, with the buoy going in the water first, trailing aft with 62 meters of mooring cable connected to the anchor chain secured to the deck.  The video below shows the final exciting step of allowing gravity to do its work in deploying 4,000-lbs of anchor chain and a 2,000-lb anchor.  Always a dramatic ending to the deployment!

The time lapse below shows the entire C22 evolution, deploying the new buoy first and then recovering the old buoy, hauling up 180-feet of anchor chain with the anchor coming up last.

With buoy operations complete, we were on to the dive site!  We next headed further south to Rebecca Shoals in the Dry Tortugas to recover an ADCP that has been sitting on the bottom collecting current profiles for over a year.  The deployment of the new bottom mount is a straightforward dive, a simple drop on a marker float (which doubles as the lifting line) to detach the lifting harness.  The recovery can be anything but simple, trying to drop a marker float on precise coordinates from a 120-foot boat in 90-feet of water in current isn’t simple, and a marker dropped off the numbers means a long search and possibly multiple dives (and LOTS of swimming).  Fortunately, Captain Baumeister nailed it once again, and the divers found the bottom mount 35 feet from the marker float – a quick dive but someone wasn’t happy we were taking its home!

With all mooring operations complete, the science party settled in for a 24-hour return transit back to USF.  Except for graduate student Luis Sorinas, that is.  Luis was tasked with collecting water samples for FWC, rolling out of his bunk every few hours throughout the night to do CTD casts and log samples for lab analysis by scientists studying harmful algal blooms.  Sleep is a luxury on these cruises. Great work, Luis! 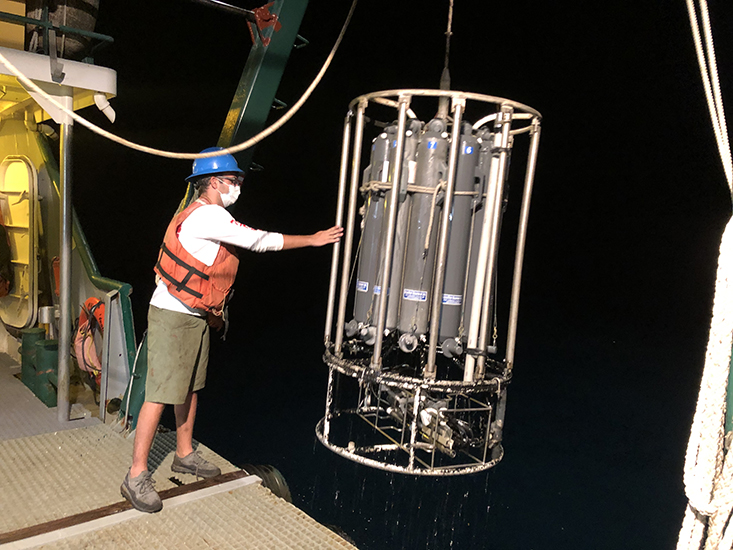 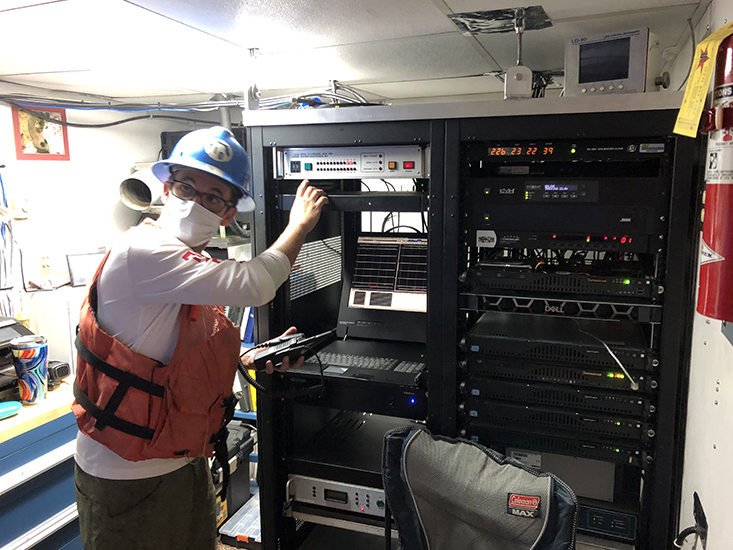 So, after 3 long days and nights of science at sea, the Weatherbird steamed under the Skyway Bridge in the early morning hours on Friday.  With the sun coming up over the stern, we made the turn into Bayboro Harbor, wiped the sleep from our eyes, and prepared to unload a few stinky moorings. 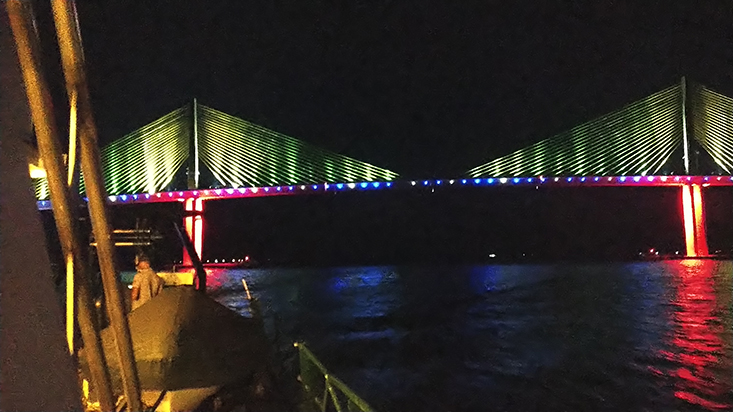 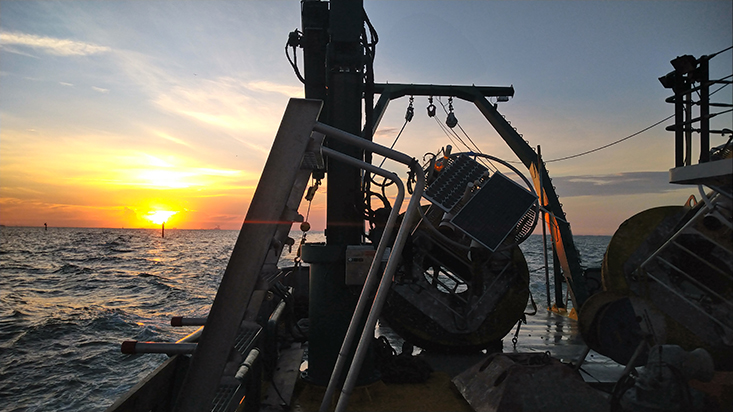 And last but certainly not least, with a successful cruise in the books it’s back home to my own bed and two happy dogs who were wondering just where the heck I’ve been the past few days! 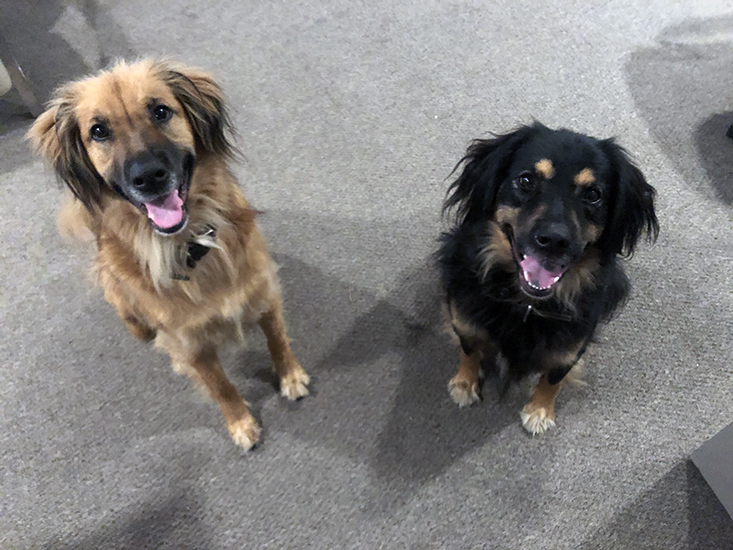