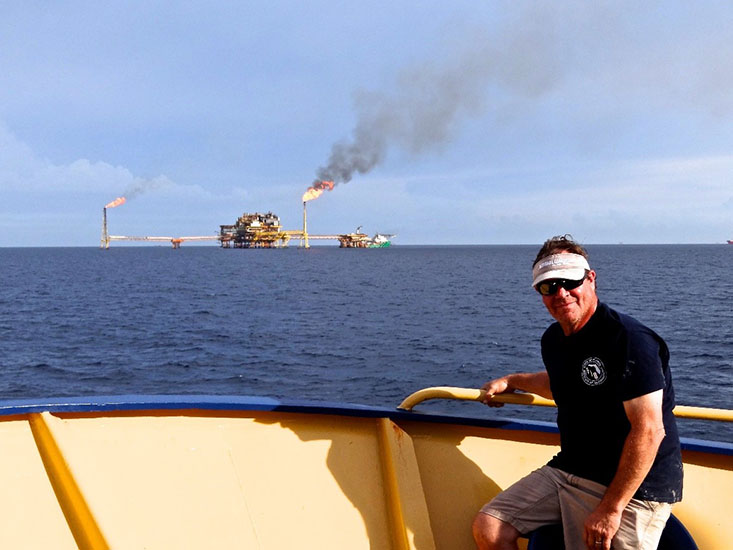 Dr. David Hollander aboard the R/V Justo Sierra sampling in 2015 near the site of the 1979 Ixtoc-1 oil well blowout in Campeche, Mexico

Our beloved colleague and friend David J. Hollander passed away unexpectedly at his home in Gulfport, FL on September 26th, from complications of COPD. At the time of his death, David was a Professor of Marine Geochemistry at the University of South Florida College of Marine Science.  Born in New York City in 1959, he was 61 at the time of his passing.

Dr. Hollander received his B.S. degree in Chemistry with a specialization in Earth Sciences from the University of California San Diego where he studied at the Scripps Institution of Oceanography. His M.S. degree from the University of California Santa Cruz was in Earth Sciences and would set him on a path of understanding the history of the planet and its changes by studying the geochemistry of the sedimentary record.  David would affectionately refer to himself during this time as a “surf-rat.” David moved to Europe in the mid-1980s and undertook a study of organic chemistry and nutrient cycling in Swiss lakes, receiving his Ph.D. degree from the Swiss Federal Institute of Technology, ETH in Zurich in 1989. Arriving in Zurich without knowing a word of German, let alone Swiss German, David quickly adopted the culture and customs of the country. His affinity for European languages and culture would serve him well throughout his professional and personal life.

After earning his degree, David completed post-doctoral research at the French Institute of Petroleum in Rueil-Malmaison, and then at the University of Indiana at Bloomington. In 1992 he accepted a position as Assistant Professor at Northwestern University, where he stayed until 2000, when he came to the University of South Florida.

During his 20 years at USF, David directed research that was not only intellectually stimulating but also influential in affecting public policies concerning oceans and coasts. Indeed, his landmark study of the sediments in Old Tampa Bay identified fertilizer run-off as a major cause of eutrophication and loss of seagrasses. These findings led to the banning of the use of fertilizer seasonally in Pinellas County.

It was, however, in the last decade of his career and his life that his work was most impactful on national and global scales. The Deepwater Horizon oil blowout in the Gulf of Mexico was a tragedy both for the people affected and for the environment. It was also David’s clarion call to put his prodigious geochemical skills to use in helping to understand the impacts of that spill and other previous accidents in the Gulf of Mexico. As the Chief Scientific Officer of a multinational consortium of universities, David assembled a team of researchers from Mexico, Cuba, Germany, the Netherlands, Canada, Australia, and the United States to identify the unique aspects of the mega blowout, which occurred in waters a mile deep. After cold-calling many of these researchers, it was David’s warm, disarming tone and infectious passion that wooed them to be a part of the team. He and colleagues discovered large quantities of oil deposited on the sea bottom and correctly attributed the deposition to oiled marine snow. One of his most unique contributions was working with Mexican scientists to assess the impacts of the 1979 Ixtoc-1 oil well blowout off Campeche as a basis to forecast what might happen to oil from Deepwater Horizon decades from now. David co-edited two highly regarded books and co-authored dozens of research papers based on his studies of the oil spills.

David was in every sense of the word a polymath. He was an accomplished marine scientist with a long record of achievements spanning the globe. But he was much more than that.  He loved art and particularly the works of Miro, Dali and other avant garde artists. His office was a museum of sorts, with every inch covered in paintings and prints, ceramics, furniture, and associated chotchkes from his frequent foraging adventures to the region’s garage and estate sales. Likewise, he was a student of architectural style and design and particularly appreciated the Craftsman, Prairie and Foursquare, Art Deco, Bauhaus, Minimal Traditional, and Mid-Century homes found in the neighborhoods surrounding Tampa Bay. He lived in a beautifully restored mid-century home. He will be remembered for hosting garden gatherings with faculty, students, and staff to watch July 4th fireworks or just to celebrate out of town visitors. Generous of spirit and his time, he inspired people around him to think big, act on personal convictions, and become involved in the community. A lifelong cyclist, David once claimed that his heart was three times larger than a “normal human” due to the time he spent as a professional bicycle racer in Europe; his friends know this to be, at least metaphorically, true. He was committed to collegiality, was a staunch advocate for junior faculty, and a steadfast supporter of scientific research staff. We will miss his boundless energy, inexhaustible inquisitiveness, enthusiasm, and joie de’vivre.

David is survived by his wife, Alexandra “Sandra” Spengler-Hollander, son, Jonah Miro Hollander, and sister, Nancy Hollander, and her family. David’s friends and colleagues were regaled with stories of how he and Sandra met at the sweater counter of Icelandic Air in Reykjavik, and of Jonah’s myriad musical accomplishments, of which his father was immensely proud.