Two scientists deploy a biogeochemical Argo float aboard the R/V Palmer during a research cruise to the Southern Ocean. Photo courtesy of Greta Shum, SOCCOM project.

ST. PETERSBURG, FL – Nancy Williams, PhD, assistant professor at the USF College of Marine Science, studies one of the most inhospitable places in the world: the icy waters of the Southern Ocean in the wintertime. The good news? She can do so from the comfort of her home.

Williams studies the behavior of carbon dioxide (CO2) in seawater to better understand how our ocean cycles and stores carbon. As a result of human activities, the concentration of CO2 in the ocean has steadily risen since the Industrial Revolution. Marine chemists like Williams calculate the components of the so-called “CO2 system” from four parameters: total alkalinity (TA), partial pressure of CO2 (pCO2), dissolved inorganic carbon (DIC), and pH.

Until a few years ago, gaining a comprehensive view of the CO2 system in wintertime Southern Ocean waters seemed impossible. While research cruises to Antarctica are relatively common in the summer months, they are few and far between during the winter. Rough sea conditions and abundant sea ice make sampling difficult and have resulted in sparse data.

The Southern Ocean plays a significant role in Earth’s climate system. The cold waters around Antarctica act like a sponge, soaking up CO2 and heat from the atmosphere and buffering the planet from the warming effects of increased CO2 emissions. However, this role in moderating the climate also makes the Southern Ocean extremely vulnerable to changes in water chemistry. The naturally high concentration of CO2 in these waters means they have become more acidic by absorbing more CO2 than other parts of the ocean. Increased acidity not only corrodes animals with carbonate shells, such as clams, mussels, and smaller zooplankton which comprise an important link in the Southern Ocean food web, but reduces the ocean’s ability to absorb more CO2. Oceanographers have projected the impacts of ocean acidification will be felt much more severely in the Southern Ocean than anywhere else.

The bottom line? As the ocean becomes more acidic with the warming climate, the Southern Ocean will store carbon less effectively.

A New Frontier and New Challenges in CO2 System Chemistry

In 2015, Williams began her PhD at Oregon State University where she was funded to work on the Southern Ocean Carbon and Climate Observations and Modeling (SOCCOM) project. SOCCOM’s goal is to understand how the Southern Ocean influences climate. To achieve this goal, the program scientists have released a fleet of about 200 autonomous biogeochemical floats that continually collect data throughout the waters surrounding Antarctica. These five-foot-tall floats function like Argo floats, said Williams. They collect salinity, temperature, and pressure data from the surface to a depth of about 2000 meters, rising to the surface once every 10 days. However, these floats also include up to six additional biogeochemical sensors that traditional Argo floats lack: pH, nitrate, oxygen, chlorophyll, back scatter, and irradiance. 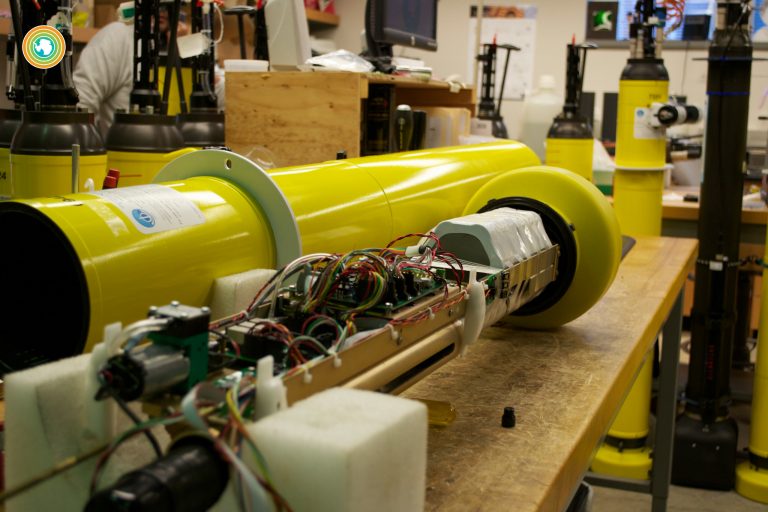 Williams was brought on as a member of the modeling arm of SOCCOM to help fix a problem that had been plaguing the floats from the beginning of the project: inaccurate pH measurements.

“Initially there were some issues with the sensors. They were calibrated in artificial seawater, which has most of the stuff that’s in real seawater like sodium and chloride. Real seawater contains additional ions and once the sensors were in the ocean, some of those ions exchanged with some of the ions on the sensor, changing the calibration,” said Williams.

Due to the inaccurate pH readings, SOCCOM researchers assumed they would be limited in what they could observe with regard to the CO2 system. “I think initially it was like let’s put pH sensors on these floats. At least we’ll be able to see big pH gradients in the ocean and we can look at the seasonal cycle of pH, which has a good signal to noise ratio, even though the sensors are not that accurate,” said Williams.

At the time, Williams didn’t realize the work of her future colleague would allow her to take her research, and the SOCCOM project, far beyond what they could have ever expected.

Bob Byrne, PhD, USF College of Marine Science distinguished university professor, has spent his career developing methodologies to better characterize the marine CO2 system. His work in the 1980s to advance the spectrophotometric pH method can be likened to a chemist’s kaleidoscope. The instrument, called a spectrophotometer, is the size of a microwave, making it perfect for laboratory and shipboard measurements. Inside, a bright light is shined through a glass cell that holds seawater dyed with a pH-sensitive indicator, Byrne said. The pH is determined by quantifying how much light is absorbed by the dyed seawater sample. This method is the “gold standard” within the field of marine chemistry, said Williams.

To address the float sensor calibration issues, Williams needed to develop algorithms that could correct for the shift that took place when the sensor was placed in seawater. She realized the key to her algorithm lay in shipboard spectrophotometric pH measurements taken on research cruises to the Southern Ocean. Spectrophotometers were now commonplace on Antarctic research cruises, providing a highly accurate pH dataset. Williams realized if she could compare shipboard pH measurements with those made by the floats in the same area, then she could correct for the previously inaccurate pH sensor readings.

The shipboard spectrophotometric measurements not only helped to improve the accuracy of the float pH data but created new scientific possibilities for the SOCCOM project. Researchers could use the improved datasets to explore the other parts of the CO2 system, such as the partial pressure of CO2.

“Once we started seeing that we can use these cruise data to adjust the sensors and get [pH readings] that are a lot more accurate, then we wondered if we could calculate the air sea flux,” said Williams. “That’s something that no one thought we could ever do with a sensor.”

Seawater samples taken by the Byrne lab group during a 2016 west coast ocean acidification cruise. Samples are dyed with a pH-sensitive indicator and inserted into a spectrophotometer, which measures the pH based on the absorbance of light. The difference in color from the surface samples to deep samples reflects a difference in pH. Photo courtesy of Jonathan Sharp.

Using equations that relate pH to the partial pressure of CO2 in seawater, Williams was able to determine how much CO2 was dissolved in Southern Ocean waters. She and her colleagues compared this to the amount of CO2 in the atmosphere to get what scientists call an air-sea flux of CO2.

What they found was startling.

Based on previous shipboard measurements, scientists had assumed the Southern Ocean primarily acted as a sink of carbon – taking CO2 out of the atmosphere and dissolving it in the cold waters surrounding Antarctica. Williams and her colleagues’ research challenged that assumption, calling more attention to the importance of wintertime observations.

A Collaboration Generations in the Making

In 2019, Williams left the SOCCOM group to join the faculty at the USF College of Marine Science. It was remarkably serendipitous that she ended up at the same institution as Byrne, whose pioneering work revolutionized her own.

“It’s hard for me to say definitively we would never have this sensor without Bob’s research. Someone might have developed a pH sensor, but [without Bob’s research] would be able to calibrate it? I don’t see how we would ever really get data that is useful enough,” said Williams. “Now that we have these sensors, we are sort of pushing them farther. Going from pH to calculating the partial pressure of carbon dioxide in the water and then calculating the air-sea flux at the surface is really pushing the limits of what a sensor can do.”

Now, under one roof, collaboration is even easier for Williams and Byrne. Both agree the future of the field lies in a combination of shipboard and sensor-based measurements. A perfect meshing of their two skillsets.

“It’s almost like we feed off each other,” said Williams. “We are kind of pushing each other. We are starting to communicate about how his group can help us [do even more than we ever thought possible with a pH sensor.]”