In Focus: Tony Greco Retires After 40 Years of Service 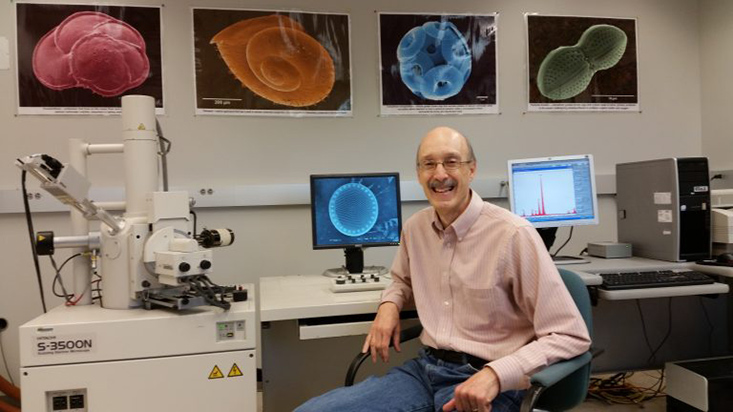 Few have a lens on the USF College of Marine Science like Tony Greco does. He has participated in more than 75 percent of its 53-year history, and has spent the last 40 years as its one and only Electron Microscope Manager. Greco’s tenure solidifies his spot amongst an elite group of faculty or staff who spent more than four decades at the CMS. This club includes current professor Bob Byrne, PhD, and retired faculty members Kent Fanning and Tom Hopkins, for example.

As if 2020 hasn’t been challenging enough, the CMS community must now accept the hard reality that he retires December 31, 2020. We’re going to miss his ability to revolutionize scientific understanding by helping us see things we normally cannot, and we thought it fitting to turn the proverbial microscope on him to capture a few reflections before he embarks on his next adventure.

I first became interested in science in general through my uncle who was a Professor of Biology at St. Bonaventure University in New York in the 70’s. He showed me fascinating images of plant sections using light microscopes in his lab. In graduate school at Western Kentucky University, I took some courses in transmission electron microscopy (TEM) and was stunned at the incredible cellular detail one could obtain. After that, I was hooked.

You were hired by the USF College of Marine Science in 1980, and according to your CV, made a move from Pennsylvania. Tell us about those early years. What was the driving force behind the big move?

After graduating from Western Kentucky University in 1978 with my master’s degree in biology, I spent a summer as an intern at the Department of Agriculture, in the electron microscope lab in Philadelphia. I performed research using the TEM on Phytophthora infestans, the fungus that caused the potato famine in Ireland in the 1840’s. I also learned how to use the scanning electron microscope (SEM). In the fall of that year, I landed a job at the University of Pennsylvania where I worked in the electron microscopy lab doing metallurgy research for 2 years. I was able to learn x-ray microanalysis, which added elemental sample identification to my skill set. While I enjoyed my job at the University of Pennsylvania, I was anxious to return to biological TEM and SEM and started looking for a new position.

In 1980, Dr. John Steinmetz, a geological oceanographer who worked at the USF CMS from 1977-1982, hired me to run a new SEM lab in what was then the Department of Marine Science at USF. The chair of the Department (it wasn’t a college then so there was no Dean) at the time was Dr. Bill Sackett.

I packed up my world’s belongings and drove 1100 miles in my VW rabbit (no AC) to St. Petersburg, FL. It seemed like such an exciting new opportunity to run my own lab.  John had just purchased a new SEM and showed me an old shower stall (MSL 233) where it would be housed. He immediately offered an SEM course where he taught the lectures, and I ran the labs. This was before digital imaging, so the students (all men at that time) learned darkroom photography. When John left in 1982 for a job in the oil industry, I took over teaching both lecture and labs. The campus wasn’t very big in those days with a just a few buildings to service an ever growing student population. In fact, the entire campus library was housed in just a few rooms off the student lounge in MSL.

In 1994 an NSF grant and some seed money led to the purchase of a new Hitachi TEM which was installed in the new (new as of 1994) Knight Oceanographic Research Center (KRC). The TEM was purchased mainly to obtain high resolution images of marine bacteria and viruses. I was then able to offer a graduate TEM course. Over the years I ‘ve used the TEM and SEM to look at everything from marine phytoplankton and zooplankton to bugs, cement and even micrometeorites in the lab.

What have you enjoyed most about your role as Electron Microscope Manager?

What I’ve most enjoyed most about my job has been working with all the incredibly talented faculty, staff, and students I’ve collaborated with over the years on a wide variety of diverse research projects ranging from discoveries of new viruses in copepods and seagrasses to foraminiferal bleaching, understanding the effects and recovery of benthic foraminifera from the Deepwater Horizon oil spill, and characterizing Asian and Saharan dust particles.

What do you recall as your proudest moment as a microscopist? 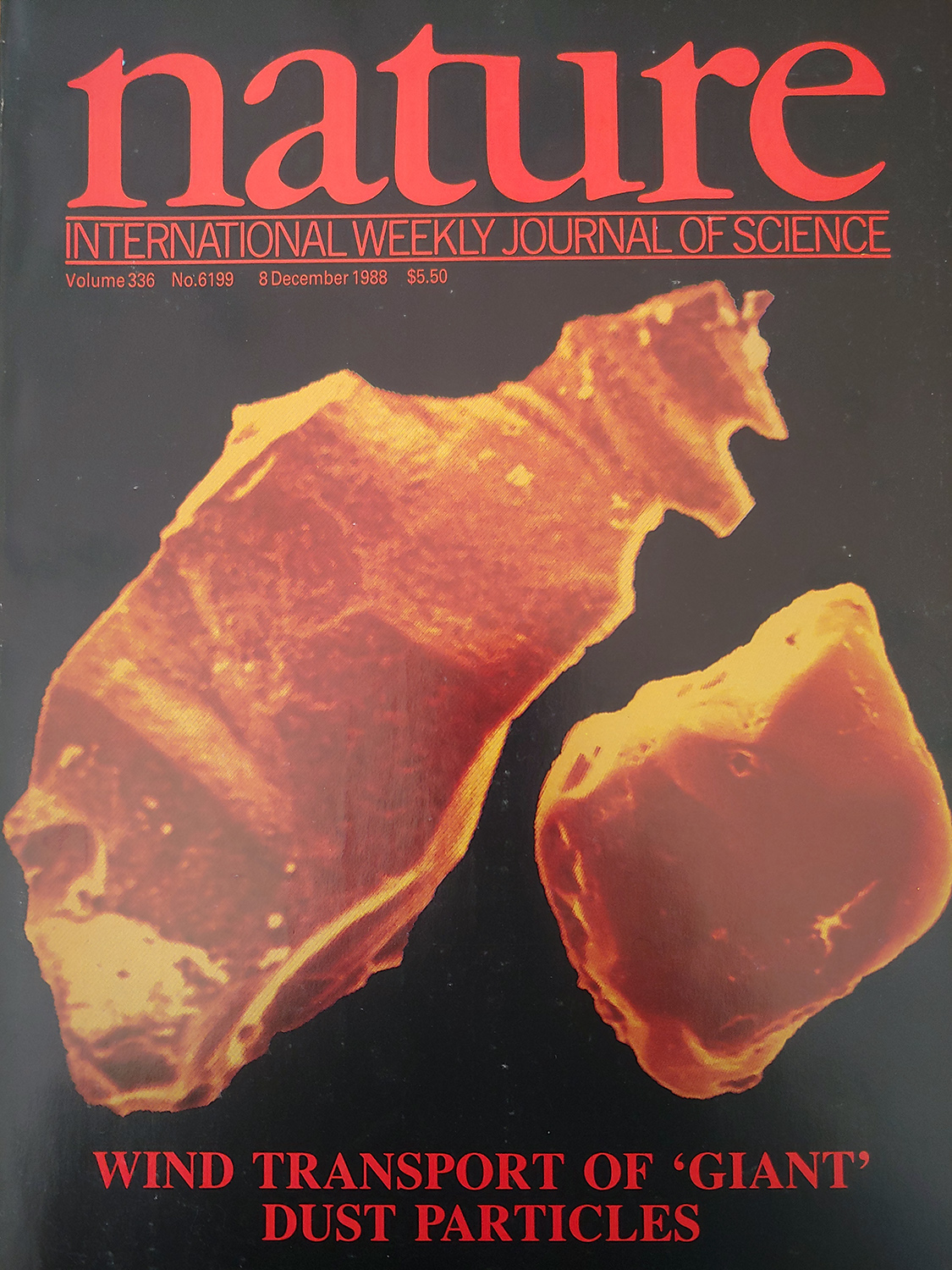 My proudest moment was making the cover of Nature magazine in December 1988. Nature had just agreed to publish our article on the long range transport of large sand grains from dust storms in the Gobi desert when lead author Dr. Peter Betzer (Department Chair at that time) suggested I submit a few of my SEM images of the sand grains as a potential cover photo. I was shocked when they selected my image. It also was a great honor to win the Costello Interdisciplinary Engineering award in 2017, which is a bit humorous as I’m not an engineer.

Lastly, one of the most significant things I’ve been involved with is chairing the Marine Science Safety Committee. Safety was not a huge priority in the 80’s and 90’s and I’m thrilled that the College now has regular lab inspections and faculty, staff and student lab safety training sessions.

40 years is a wonderfully long time. Any favorite memory “snapshots” come to mind (microscope-related or not)?

The community outreach events were very rewarding such as the St. Pete Science festival, Oceanography Camp for Girls, and the Great American Teach-In. I always enjoyed hosting countless lab tours over the years as well. I find that most of the general public has no idea that the oceans are filled with bacteria and viruses. I always receive a big reaction to my 3-D stereo images and would routinely display some familiar samples like bugs to stimulate their interest. The recent science as art forum hosted by Dr. Mya Breitbart’s lab in January 2020 was very unique as several artists were inspired to make sculptures based on my SEM images. One artist even performed a dance with my SEM images scrolling on a giant screen.

Many of the memories that easily come to mind involved the interaction with my students. One particular grad student called me at home a little before midnight to ask if I could run down to the lab and change the filament on the SEM which had blown so she could finish her project. Another student called me the night before a major exam tearfully begging me to reschedule it because her boyfriend had just broken up with her. Finally, there was a struggling international student who kept bringing me home cooked food in a veiled attempt to bring up his grade. Unfortunately for him it didn’t work. Maybe my food standards are too high.

I also enjoyed offering the SEM lecture and lab course to undergrads in the last 5 years. They had a real sense of wonder and awe at the incredible images they could obtain of samples they had selected and prepared themselves.

What about the CMS had you stay in your role for 40 years? What’s its greatest charm?

I found that I really enjoyed the mix of teaching and research, the people I interacted with, and the fact that I could work at my own pace in a relatively low stress job.  Although I was offered a higher paying job in 1991 at a government research lab in the heart of New York city, I turned it down after deciding I didn’t want to give up teaching to write research papers for a living or raise a family there.

What will you NOT miss as you move forward to your next adventure?

Probably the least favorite part of my job is scrambling for funding to pay for servicing the microscopes and billing people for work on the instruments. This year, the 26-year-old Hitachi TEM finally died so with severe budget cuts looming due to the COVID-19 pandemic, and a $500,000 price tag for a new TEM, it’s probably a good time to retire.

I’m looking forward to doing some travelling in retirement, especially to the Carolinas where my two daughters and five grandchildren live. I’ll also be doing some volunteering in the community with my wife once the pandemic ends as well as having more time for a little golf and music.  I’m taking bluegrass banjo lessons, which has been immensely challenging.