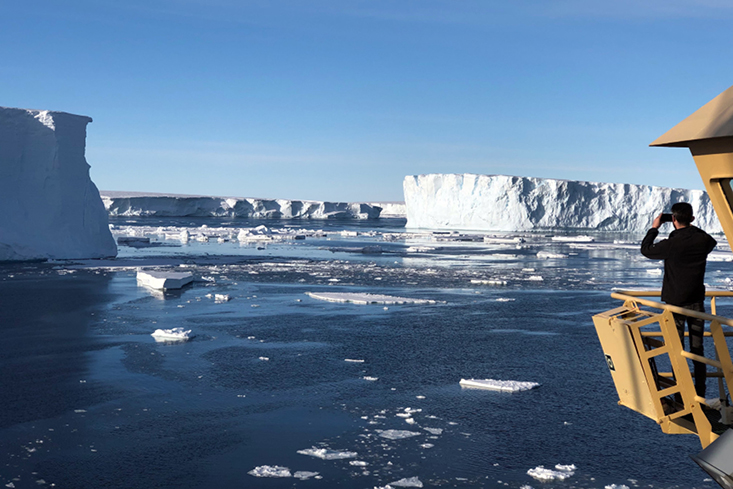 Ali Graham, PhD, a geophysicist at the USF College of Marine Science observes the Thwaites Glacier in Antarctica from the R/V Nathanial B. Palmer.

For the full experience view our multimedia story presentation

There’s no such thing as a short expedition to Antarctica, so it was already going to be a long time away from home.

But Alastair Graham, PhD, associate professor in USF’s College of Marine Science, had done this eight times before. This time he’d depart at the end of January 2020 and return to port at the end of March, then zip back home as quickly as flights would allow to his wife Beth and two young children, who would be settling into their new life in St. Petersburg, Florida.  They’d only just arrived in Florida from the United Kingdom (UK) in August of 2019 for Graham’s new position at USF. Although his research shivers spines (Graham studies glaciers whose potential failure holds global implications for sea level rise), the time away for yet another research expedition fell into the realm of relative normalcy for the Graham’s.

But then of course 2020 became anything but normal.

While he plugged away aboard the 300-foot-long R/V Nathanial B. Palmer with 26 other scientists from around the globe -- sharing 12-hour shifts, processing reams of data, and enjoying the intense but relished rhythms of life at sea that so gloriously lack the demands of landlubber life -- a global pandemic jammed its stake into the rhythm of the rest of the planet that wasn’t operating in such perfect isolation.

Experiencing the pandemic while in one of the most remote and pristine places on the planet, in what was arguably the safest place on the planet, was surreal at best, Graham said.

He and the team had received daily news digests from the New York Times and were able to occasionally speak with loved ones at home using the satellite phone, helping them keep a finger on the pulse of what was going on. Those aboard who had friends or family affected by the COVID-19 virus were yanked into the vortices of reality much more intensely than others. But accepting that there could be a shortage of toilet paper, hand sanitizer, and chicken anywhere on the planet, let alone in America, in the year 2020? That seemed impossible. Absurd. The death toll? Horrifying.

“It played out like one of those disastrous zombie movies,” Graham said.

And it sure took a lot longer to get home than originally planned. Graham didn’t return to Florida until the middle of June.

As the expedition drew to a close, the shipboard conversations pivoted from science to this singular focus:  what’s the best way to get home? The pandemic turned global travel from a modern convenience able to be sorted with a click, to full-on quagmire. Graham was among ten members of the science team for whom the next stop was the UK. He and his family, British citizens, had spent the holidays at a cozy Airbnb in the Midlands of central England – and Beth and the kids ended up getting stuck there when coronavirus-related travel plans took effect.

Instead of heading into port in Chile, which was soon to close its borders in any case, the UK-bound contingent was dropped off at the British Antarctic Survey (BAS)’s Rothera research station on the western coast of the Antarctic Peninsula.

“It was supposed to be easy to get to the UK from there,” he said.

After spending three nights on the base and considering chartering a ship to get back to the UK, they all took a small plane to the Falkland Islands off the southeastern coast of Argentina, where they had to be quarantined in a small hotel for 11 days. In the meantime, BAS staff worked tirelessly to find the scientists a way home, eventually finding seats for the group on aircraft normally used to transfer military personnel. After that, what is usually about 16 hours of flight time back to the UK ended up taking more than 22 hours because they were routed through Dakar, Africa first. The hour or so they sat on the tarmac there felt like several days, Graham said.

At last, on April 5th, Graham got to the Midlands, where he’d hoped to arrange for flights back to the US.  But at that point, anyone with an H-1B visa – a temporary work visa – was banned from returning to the US. He and his family would end up spending two-and-a-half months marooned in the one-bedroom flat.

Graham’s next adventure was digital: he set about emailing people he never even met, requesting help to get home. The list included USF’s President Currall, USF Provost Ralph Wilcox, and more.

“We were extremely lucky to be safely ensconced in the Malvern Hills, with good weather (for the UK!) and a nice, small community,” Graham said.  “But our lives were in St. Pete.”

Despite consistent support from College of Marine Science dean, Jackie Dixon, PhD, and a wealth of support from USF administrators, initial attempts to get Graham home failed.

In the end, Congressman Charlie Crist’s office played a significant role – exhausting multiple options before successfully sourcing help from the Customs and Border Protection office in Dublin, Ireland, who granted a national interest waiver that ensured the Graham family a safe return to US soil. It came in the nick of time and after a series of ups and downs, including uncertainty about whether current H-1B visa holders would be impacted by new travel restrictions.

“We’re really relieved to be home,” Graham said. “It feels amazing to have had so many new friends and colleagues from USF and our neighborhood rally around us.”

In the end what should have been about a 60-day expedition away from home took 147 days. Graham’s passport would be stamped about twice as many times it would have in the pre-COVID world.  But, he’s home at last, and his family is safe. And persistence and resilience and Tampa Bay community support paid off.