It’s not just the ocean. Are rivers also at risk from climate change? 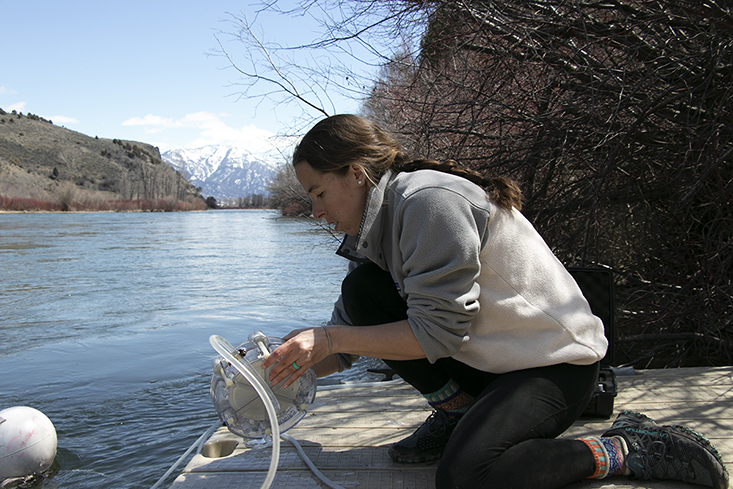 If the oceans are the heart of our Earth, rivers are its veins. They carry water from land to the sea, transporting anything they collect along the way. One river that pulses through the Pacific Northwest, carrying with it a spate of economic, recreational, and cultural value, is the Snake River.

Like the ocean, rivers such as the Snake are changing in response to our warming climate. But scientists haven’t had the right tools to monitor these impacts on freshwater systems like they have in the ocean.

Working under the advisement of Robert H. Byrne, PhD, professor at the USF College of Marine Science, I’m using the Snake River as my “guinea pig” to try to adapt the methods scientists have used to study the sea to study freshwater rivers. It’s taken us about four years of successes and failures to get to this point.

The pH of seawater is measured using a technique called spectrophotometry. This method is a fancy version of dipping litmus strips into a solution to measure the pH. Being an indicator dye, litmus changes color based on the pH of a solution. Chemical oceanographers add indicator dyes, similar to litmus, to seawater samples and instead of using their eyes to see the color change and determine a pH, they use an instrument called a spectrophotometer. Until recently, spectrophotometry was able to be used in the ocean; estuaries and freshwater environments were not suitable.

The indicator dyes must be calibrated to the salinity of the water you are measuring. Until recently, these dyes were only calibrated for the salinity conditions present in the open ocean, where salinity is usually around 35. As you move toward the coast and encounter estuaries and rivers, the salinity dramatically decreases (sometimes even reaching zero!). I spent the first three years of this project focused on re-calibrating the indicator dyes for use in lower salinity waters.

With these newly modified pH methods researchers will be able to monitor (1) how human-caused climate change is impacting rivers and (2) how climate-driven changes in river chemistry may be impacting the oceans and contributing to the global carbon cycle because remember, all rivers flow into the sea.

I have spent the last year nestled along the banks of the Snake River using these modified pH methods to monitor its impact from climate change. Unfortunately, research has shown that climate change is already taking a toll on the river. The Snake’s water temperature is on the rise, its spring flows are turning into winter flows, and there are more and more toxic algae blooms each summer. I have a slew of questions I’m trying to answer: if all these thermal changes are already impacting the Snake River, what might be happening on a chemical level due to climate change? Could the Snake River also be suffering from acidification? How do we tease out these different factors?

These questions go deeper than understanding the surface chemistry of a River. There’s a lot more to this story.

Currently, many Idahoans are fighting to break down some of the existing dams along the Snake River in hopes of reviving the sockeye salmon population, which hasn’t been around for 30 years. If vulnerable to acidification, this life-bearing river may not be tolerable for this beautiful species to call home. People are eager for this symbolic species to return to their free-flowing rivers, but is it safe for salmon to come back? Will the chemical conditions in the river meet the needs of salmon once and if they return?

I hope that my research will shed light on these hard questions and provide a platform for researchers to monitor future climate-driven changes in the Snake River but for now, I should probably slither back to the Snake and get back to work.