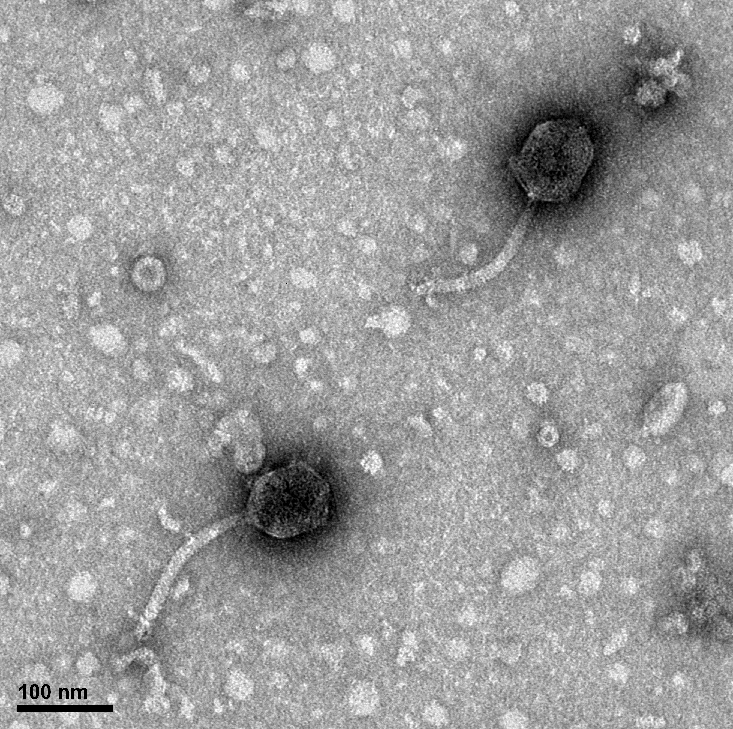 Transmission electron micrograph of a phage that infects a marine bacterium called Vibrio natriegens, an emerging model organism for marine lab studies. Under Breitbart’s mentorship, Yonas described the genome, which he reported in Microbiology Resource Announcements.

If ever you doubted the planetary significance of bacteriophages, chat with Noah Yonas. He’d love to tell you about these ubiquitous viruses that infect bacteria, and will no doubt share his profound passion for phage therapy, too -- a medical treatment for people suffering from antibiotic-resistant bacterial infections. Yonas will get you onto “team phage” before you can spell DNA.

“Phages have intrigued me for a long time. They play such a vital role in the environment and are absolutely key to understanding the genetic blueprint for all living things,” he said. “But we know so little about them. They really don’t get the respect they deserve.” 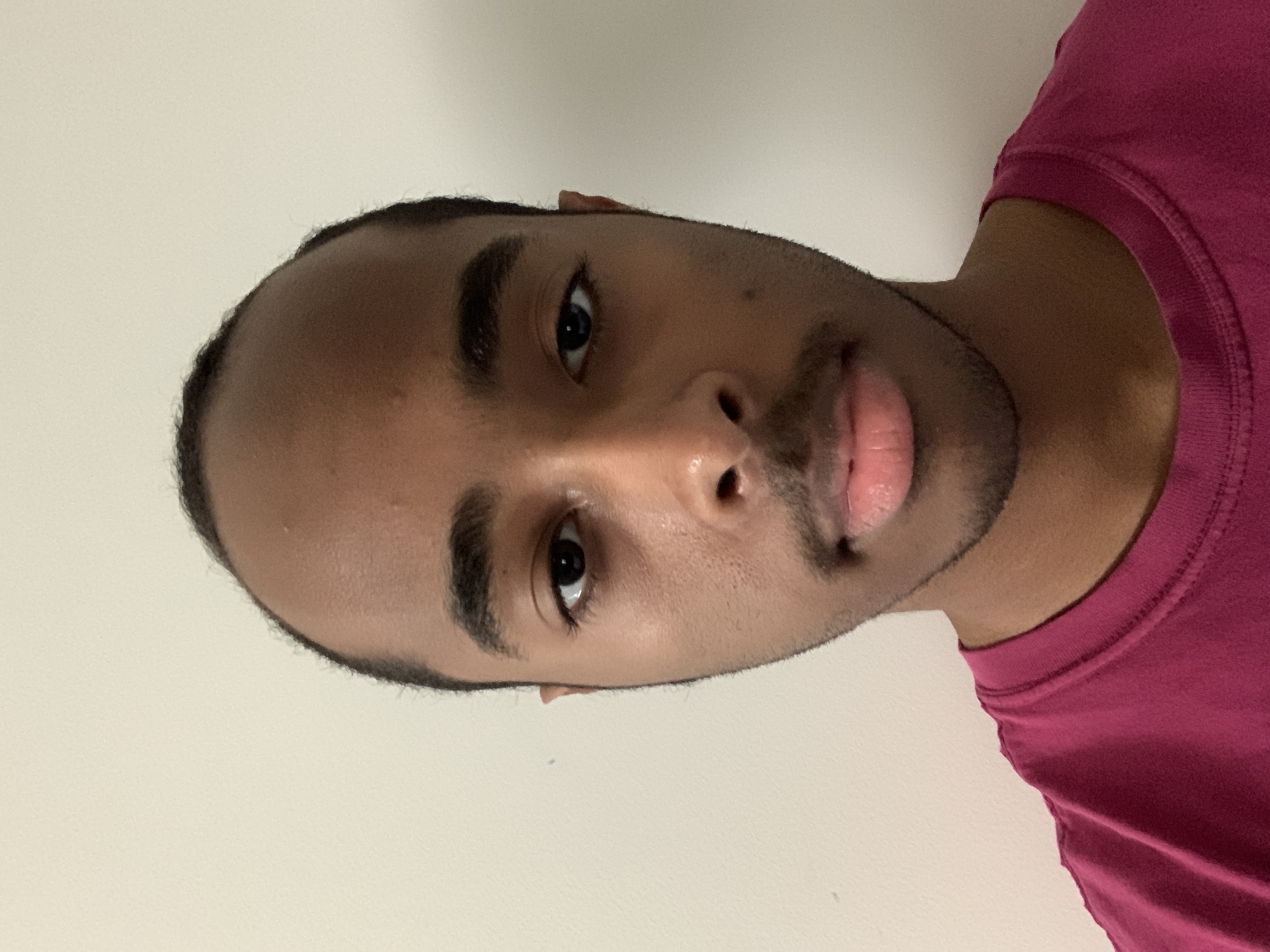 Undergraduate student Noah Yonas, was mentored by Mya Breitbart, PhD, for the first-ever NSURP. This new program was developed once the pandemic hit to ensure that students from underrepresented minority groups were able to get critical research experiences.

Yonas recently authored a publication in Microbiology Resource Announcements where he describes the genome of a phage whose name sounds more like a treatment for pools, or maybe a low-budget sci-fi thriller: Aquatic Killer 99 (AQKL99). AQKL99 infects a marine bacterium called Vibrio natriegens, an emerging model organism for marine-related lab studies. It may even steal the throne from E. coli, the longstanding microbial lab rat for biotechnology and genetic studies.

V. natriegens is a marine organism whereas E. coli is not, and it doubles its population in ten minutes to E. coli’s 20. Game on.

“Having the genome for another phage that infects V. natriegens is a big deal for microbiologists using this emerging model system,” said Mya Breitbart, PhD, a professor who has big plans for using this organism in her marine genomics lab at the USF College of Marine Science. This new phage was isolated last year by another undergraduate student, Paige Boleman from the USF St. Petersburg campus, but its genome sequence remained unanalyzed - creating the perfect opportunity for Noah to contribute. “Noah really threw me for a loop with his quick mastery of this project and the great questions he’d ask in our lab meetings. He was fantastic.”

Because here’s the thing about Noah Yonas: He’s not (yet) a microbiologist. Not by traditional academic standards, anyway. He’s a junior at the University of Maryland College Park. Sequencing the phage genome was his very first lab-based experience. He figured out the software, performed the work, and published his first paper – as an undergraduate – over the course of an eight-week program for which Breitbart served as his faculty mentor.

“What I took away from this program was that I love doing this,” Yonas said. “It gave me the opportunity to take this little spark of interest I had, in microbiology, and to grow it into something much bigger.”

Yonas was one of 250 students to participate in this year’s inaugural NSURP, the National Summer Undergraduate Research Project. The program, and Yonas’s achievements, blew Breitbart away.

“NSURP was my big source of joy for the summer. It was nice to feel like we were doing something good in all of the awfulness of 2020,” she said.

NSURP, whose tagline was #NoLabNoProblem, is the brainchild of Michael Johnson, PhD, a microbiologist at the University of Arizona. He worked with colleagues to design it in response to a double whammy of 2020: the COVID-19 pandemic was derailing research programs around the globe because everyone had to stay home, and events of racial injustice incited the need for action.

The primary goal was to ensure that, despite stay-at-home orders, students from underrepresented minority groups could get critical research experiences under their belts so that a STEM career path remains a viable option for them.

Johnson became a matchmaker, leveraging the power of crowd-sourcing to pair undergraduate students seeking research experiences in microbiology – all of which would be performed virtually – with mentors around the country. He and colleagues took to Twitter to spread the word, as reported in a recent publication, and that’s where Breitbart saw it. Interested mentees and mentors filled out simple Google forms recording their interests and available projects, which were collated and launched a website for the program.

The program, which ran for eight weeks from June 22, 2020 through August 14th, offered mentors virtual training in anti-racism and remote mentoring, and all students who signed up received weekly professional development opportunities as well.

“I’m so glad I opened that email offering this opportunity,” Yonas said. “I couldn’t believe something this amazing landed on my lap. It was one of the best decisions I ever made.”

At the end of the program, NSURP students gave virtual presentations that are currently available on the NSURP website. Yonas won honorable mention.

“It felt so good to be valued, and to have my work respected,” he said. Yonas, who says he really enjoys diving down the “rabbit holes” of discovery, gained critical research experience plus training in scientific writing and how to present a poster, and learned additional invaluable lessons as well.

“Science is about advances and failures. They all drive the enterprise forward,” he said.

Breitbart is no stranger to programs like NSURP. Her lab at the College of Marine Science is committed to broadening access to STEM in general, and she has mentored several traditionally underrepresented undergraduate and graduate students since she started at USF in 2006.

“Mya’s lab is a great example of the power of effective mentorship,” said Tom Frazer, PhD, dean of the College of Marine Science. “Mentorship is such a critical part of graduate education in general and the education of underrepresented students especially.”

Karyna Rosario, PhD, was one of Breitbart’s graduate students who is now a Research Associate in her lab.

“Even though Mya was only two years older than me when I started, she seemed at the time like a great mentor,” Rosario said. “She was supportive of me from the get-go and treated me more like a colleague than a student. She always makes me feel like I have a voice.”

It’s no surprise that Breitbart’s lab group and staff routinely participate in outreach activities such as the annual St. Petersburg science festival, work with a nonprofit called Girls, Inc., the Girl Scouts of America, the College’s Oceanography Camp for Girls, and more.

But NSURP had a particularly strong influence on her, she said.

“At first, frankly, I was skeptical that I could effectively mentor a student I’d never met before,” said Breitbart, who paid Yonas for his 40-hour work weeks from an NSF grant. “But Noah very quickly became integrated into our lab. This program really pushed me to realize what’s possible. We CAN do amazing science virtually,” Breitbart said. “We simply have to adapt.”

As for Yonas, he aims to go to medical school and become a doctor who also does research on the side. Research on phage therapy (surprise, surprise!).

“This program lit a fire in me,” he said.