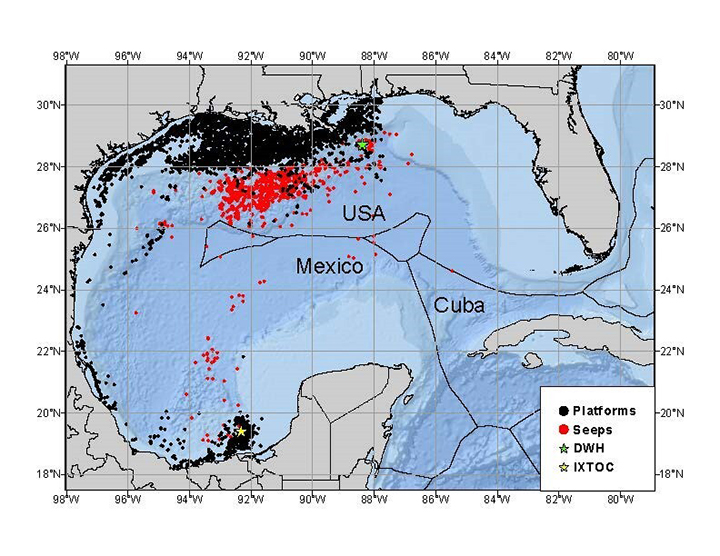 ST. PETERSBURG, FL  — In an eight-year study (2011-2018) led by the USF College of Marine Science (USF CMS) after the historic Deepwater Horizon oil spill nearly 10 years ago, scientists sampled more than 2500 individual fish representing 91 species from 359 locations and multiple habitats around the Gulf of Mexico—and found evidence of oil exposure in all of them, as reported in Nature Scientific Reports.

The headlines from the study: the northern Gulf of Mexico has the most extreme oil pollution “hot spots” identified from samples obtained off the United States, Mexico and Cuba; and the fishes with the highest concentrations of the most toxic part of crude oil were Yellowfin Tuna, Golden Tilefish, and Red Drum. Groupers and Snappers also had evidence of sustained PAH exposure but at lower levels than those top three. 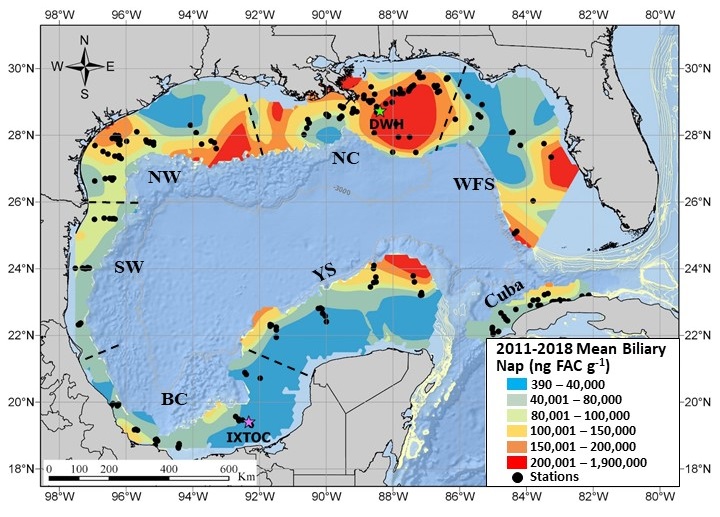 This heatmap shows the north central (NC) region of the Gulf of Mexico as the hot spot of PAH concentrations (specifically a chemical component of oil called naphthalene), as confirmed in the study of bile from 91 fish species sampled in the Gulf of Mexico from 2011-2018. This is the largest study of its kind. Additional hotspots are located off major population centers, such as Tampa Bay.

“We actually haven’t found one oil-free fish yet,” said Dr. Steven Murawski, professor at the USF CMS who led the 10-year, nearly $37 million global research effort (C-IMAGE) funded in response to the Deepwater Horizon spill. The latest study is the most comprehensive analysis of oil pollution in fishes of the Gulf of Mexico yet conducted.

The scientists examined levels of polycyclic aromatic hydrocarbons (PAH), the most toxic chemical portion of crude oil, in the bile of the fish. Bile is a waste product secreted by the liver during metabolism.

“The results surprised us,” said Dr. Erin Pulster, a C-IMAGE researcher at the USF CMS who led the PAH study.

The high levels of PAH exposure in Tilefish weren’t too surprising because Tilefish live most of their adult lives in and around burrows they excavate on the seafloor, and PAHs are routinely found in Gulf sediments. Groupers and snappers also live in areas of active oil and gas activity — around artificial reef structures, which can have considerable benthic oil contamination. The team expected that these fish would have higher levels of PAH exposure than they actually did. 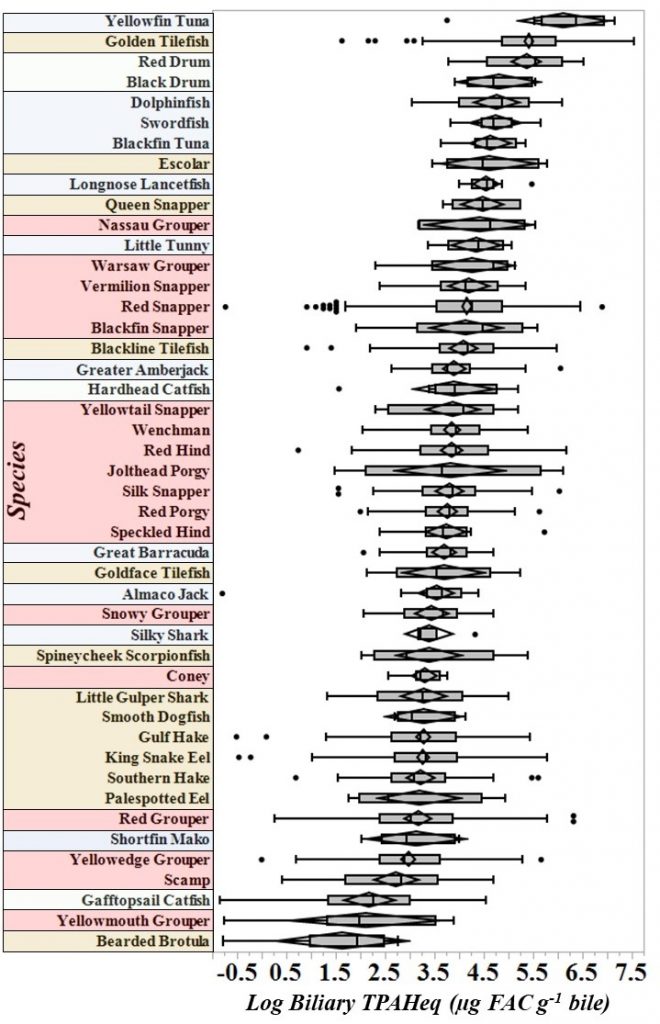 This figure shows the concentration of PAHs in the bile of 46 of the 91 fish species studied from 2011-2018. Yellowfin tuna had the highest concentrations. Species that live in the open ocean, near the seafloor, and near reefs are highlighted in blue, brown and red, respectively.

They also expected that pelagic fish such as fast-swimming tuna that don’t lollygag around the bottom would merely have trace levels of the contaminants.  The fact that tuna took the trophy as the most oil-laden suggests they must be chronically exposed to oil.

“This also begs a new question that we have yet to answer in full,” said Pulster. “Although water concentrations of PAHs can vary considerably, they are generally found at trace levels or below detection limits in the water column. So where is the oil pollution we detected in tuna coming from?”

The Gulf of Mexico: Come enjoy the sunsets, the shorelines, and the slicks?!

It turns out that the Gulf of Mexico is a pretty oily place. Sediments at the bottom where a lot of oil from the Deepwater Horizon spill settled are resuspended by storms, currents, and critters and therefore re-expose bottom-dwelling fish. But there are other culprits as well. Additional sources of PAHs include thousands of old oil and gas rigs in the Gulf, leaking infrastructure, spills or accidents, boats, fuel from airplanes, runoff from the coast, and even natural oil seeps—fractures on the seafloor that are home to unique animals and can ooze the equivalent of millions of barrels of oil per year.

The PAH hot spot of the northern Gulf of Mexico was less of a surprise, Pulster said. Not only is it the site of the Deepwater Horizon spill that gushed nearly four million barrels of oil over three months and home to hundreds of rigs, but it’s also where the Mississippi River meets the Gulf. The Mississippi acts as a kind of pollution drain for approximately 40% of the continental United States and two Canadian provinces. Additional hot spots were found off major population centers, such as Tampa Bay, suggesting that runoff from urbanized coasts may play a role in the higher concentrations of PAH.

When will it be too late?

Today the fish from the Gulf of Mexico are safe to eat; restaurants serve the flesh of the fish, not its liver and certainly not the bile, and oil contaminants in fish flesh are well below public health advisory levels. But a major question looms.

“We don’t know when the tipping point will be,” Pulster said.

The way fish respond to PAH exposure varies depending on the species. While fish seem to metabolize the byproducts of an oil spill fairly well overall – akin to the way humans metabolize alcohol and cheeseburgers – chronic exposures tax their detoxification system and rarely ends well. There is a point where the liver can’t keep up and fish health declines.

For example, despite the fact that Groupers had lower PAH concentrations in their bile than say tuna in the current study, they still showed signs of chronic exposure – and in fact, a separate study also led by the USF CMS confirmed that Groupers struggle to keep pace with repeated exposure to oil. 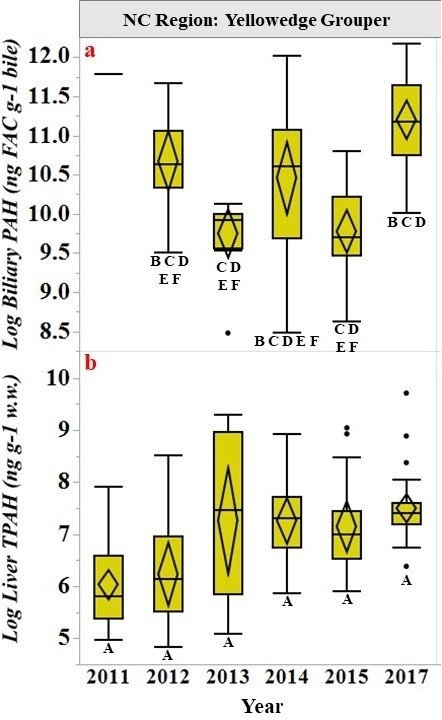 PAHs are increasing in time for several Gulf species, including Grouper, as confirmed in a separate study (https://doi.org/10.1016/j.scitotenv.2019.135551). This graph shows PAH concentrations in the liver (bottom) and the bile (top) of Yellowedge Grouper. Their PAH concentration in the liver increased more than 800 percent from 2011 to 2017.

In this case the team measured the concentration of PAHs in the liver tissue as well as the bile of ten Grouper species. Having PAH in the liver indicates the fish has experienced chronic exposure to oil and in fact, the liver PAH concentration for Yellowedge Groupers increased more than 800 percent from 2011 to 2017.

“But we still don’t know when they’ll hit that critical stage at which permanent, irreparable damage occurs to the population,” Pulster said.

All of these studies were made possible by the funds invested in research by BP as a result of the Deepwater Horizon oil spill. The funds specifically came from the independent research body, the Gulf of Mexico Research Initiative (GoMRI)/C-IMAGE I (#SA 12-10), II (#SA 15-16), and III (#SA 18-16). Comprehensive Gulf-wide research to understand what’s normal and what’s not for the Gulf of Mexico ecosystem had never been done before.  But these funds are drying up now that GoMRI is coming to the end of its ten-year program.

“This was the first baseline study of its kind,” Murawski said, “and it’s shocking that we haven’t done this before, given the economic value of fisheries and petroleum extraction in the Gulf of Mexico.”

The snapshot of the health of the Gulf the scientists demonstrates complex interactions between the environment and the fish. Oil residues from past spills mix with new inputs of oil to the system, suggesting oil is now as pervasive in the Gulf as its salty-sweet sunsets.

“Long-term monitoring studies such as these are important for early warning of oil pollution leaks and are vital for determining impacts to the environment in the case of future oil spills,” said Pulster.