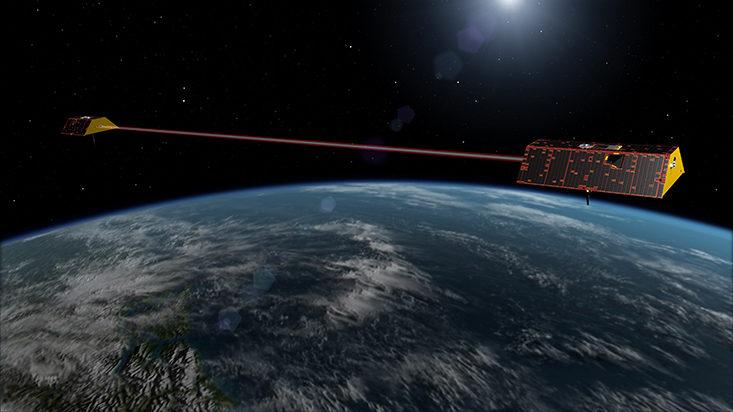 Illustration of GRACE-FO in orbit. Courtesy of NASA/JPL-Caltech.

In the early 2000s, Chambers was working as a postdoctoral fellow at the University of Texas Center for Space Research when his advisor, Byron Tapley, PhD, along with German scientist, Christoph Reigber, PhD, joined forces with NASA to form the Gravity Recovery and Climate Experiment (GRACE) mission.

Launched in March of 2002, GRACE’s mission is to map variations in Earth’s gravity field from space. GRACE looks like a space train, a pair of satellites that fly 220 kilometers apart, 500 kilometers above the Earth’s surface. It’s this unique design, two satellites flying at a precise distance from one another, that allows GRACE to measure the Earth’s gravity field with a high accuracy.

When the batteries on GRACE finally died in October of 2017, ten years beyond the expected lifetime of the mission, scientists, including Chambers, were eager to continue the legacy. So, GRACE Follow On (GRACE-FO) was launched in May of 2018 and continues to map Earth’s gravity field from space.

With 18 years of nearly continuous gravity data, scientists have used GRACE to study everything from changes in groundwater storage to the melting of glaciers on Greenland.

Rising Above the Noise

Studying deep ocean currents from space may seem counterintuitive. Certainly, for many involved with the GRACE mission, it seemed implausible at first.

“I’m looking at a signal that is about 100 times smaller than the signals that people who are looking at the ice sheets or hydrology are familiar looking at,” said Chambers. “In a lot of early papers, the way noise was classified in the GRACE mission was to look at the signal over the ocean and to assume it was all noise. And I’m actually trying to demonstrate that no, it’s actually not noise, there is a coherent signal there.” 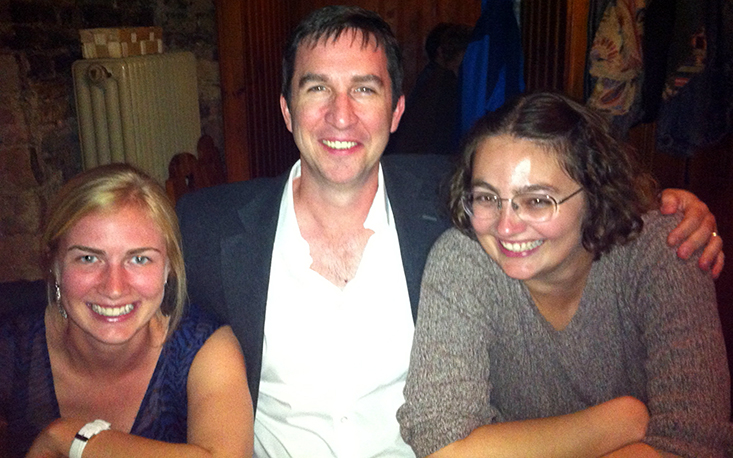 So, Chambers set out to prove the signal over the ocean was more than noise. Chambers’ former student and College of Marine Science graduate, Jessica Makowski, was able to show that GRACE measurements of the Antarctic Circumpolar Current (ACC) aligned with the expected physical dynamics of the current. These data not only demonstrated that Chambers and Makowski were seeing more than noise in the data, but also allowed them to pick up on fine scale fluctuations within the current that had not been previously observed.

“Back when GRACE was still new, much of the oceanographic community was skeptical of its results,” said Jennifer Bonin, PhD, a scientific researcher with Chambers’ group. “Many scientists focused on demonstrating that GRACE was able to observe the same major signals found in their ocean models – and were convinced that if they could not do so, GRACE was wrong.”

“Don was one of the first to move beyond verification checks, to actually do new ocean science with GRACE with the goal of proving how GRACE could help improve the models, rather than the other way around,” said Bonin.

Chambers’ previous work set out to prove GRACE could be used to accurately observe deep ocean currents. Now, he wanted to apply those hard-earned skills. So, he set his sights on an even bigger challenge: understanding the role two major currents play in global climate.

Both of these currents, the ACC and the Deep Western Boundary Current in the Atlantic, play a significant role in the Earth’s climate. 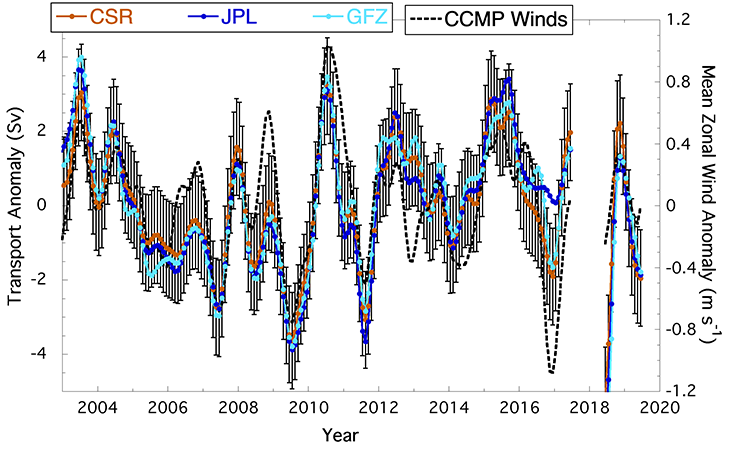 This is an example of the kinds of datasets Don Chambers, PhD, enjoys wrestling with. This plot shows Antarctic Circumpolar Current (ACC) transport variability over time and its relationship to wind fluctuations. It’s not an uncomplicated exercise, as GRACE satellite data is processed at three different locations (corresponding to the three colored lines). Figure courtesy of Don Chambers, USF College of Marine Science.

The ACC transports more water per second than any other current on the planet and connects all three major ocean basins, acting as a means of oceanic communication across the planet. It also functions as an insulating blanket, separating the warm water of the subtropics from the cold water surrounding Antarctica.

The Deep Western Boundary Current in the Atlantic is made up of cold, dense water known as North Atlantic Deep Water (NADW). This water mass is an integral part of the overturning circulation which is responsible for transporting warm water (and heat) from the tropics to the poles and vice versa.

Using the now 18-year-long time series from GRACE, Chambers and his team hope to gain novel insight into how these currents function and how they’re responding to climate change. “Today, data from GRACE are the only measurements that are capable of measuring these deep currents at a regular timescale, on an ongoing basis, and not just a snapshot,” said Chambers. “This gives us unprecedented insight into how these currents behave, how they have changed over the last 18 years, and how they may change in the future.”

The behavior of these currents and the role they play in climate is subject to decades-long debate. While potentially intimidating to some, Chambers was eager to throw his hat into the ring and demonstrate just how powerful GRACE could be for untangling some of the biggest questions related to the ocean’s role in climate change.

This is not the first time Chambers has found himself employing an under-utilized tool to answer a big scientific question. Much of Chambers’ career has centered on studying global sea level trends using satellite altimetry, a technology which when first introduced in the 1980s, was met with a healthy dose of skepticism from the scientific community. Yet, Chambers recognized the importance of satellite altimetry and today has even combined altimetry data with GRACE data to further our understanding of anthropogenic sea level rise.

“Don has always been willing to ask questions along the forefront of science - and has been able to answer them,” said Bonin. “But, I think that, above all, Don does research because he is curious. He works to understand the world.”