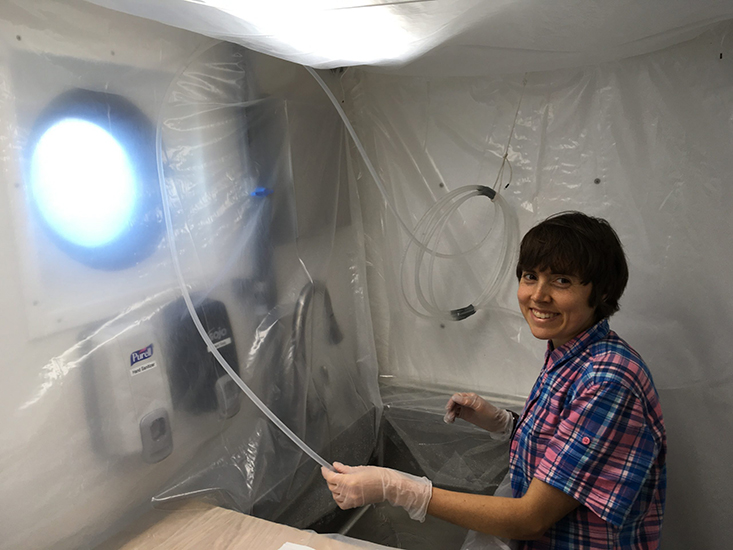 Lead author Adrienne Hollister aboard the R/V Hogarth in 2018. A key challenge for scientists working on trace metals is contamination, especially aboard a research ship, so clean lab techniques are required.

ST. PETERSBURG, FL – Everyone knows about the circle of life as it pertains to the lions, meerkats, and warthogs in Africa (Thank you, Disney!) but there’s another remarkable circle of life story that takes place in the ocean every day and all year long — even though you can’t see it.

In this one, phytoplankton are the stars of the show. Responsible for every other breath you take, these microscopic algae consume what they need in the sunny parts of the sea – nutrients and trace metals, such as iron and zinc – and release them when they die. The cycle is as fundamental to understanding the chemistry of the world’s ocean as it is to understanding life in the sea.

Scientists have a pretty good handle on what happens with the macronutrient part of this regeneration story. Nutrients, like nitrogen and phosphorus, are found in low concentrations at the ocean surface where they are taken up by phytoplankton, and their concentrations increase with depth as phytoplankton sink and die. But the behavior of the trace metals, which are like vitamins for phytoplankton, has been tough to pin down. A new study reported in Limnology and Oceanography helps shed light on some of the mysteries.

“This is the first time we were able to capture how phytoplankton regenerate trace metals,” said Dr. Kristen Buck, associate professor at the USF College of Marine Science (USF CMS) and senior author of the study.

A life and death simulation

The team ran a six-month experiment in a lab at USF CMS. They grew five batches of phytoplankton from the Gulf of Mexico, placed them in the dark to decay, and tracked what happened over time.

Three were mixed cultures, and two were monocultures: one comprised entirely of Karenia brevis, the species responsible for Florida’s red tides, and the other of Pseudo-nitzschia dolorosa, which is part of a group of phytoplankton called diatoms. Diatoms have cell walls made of silica glass.

“This is the most comprehensive study of its kind,” said lead author Adrienne Hollister, who performed the work as a master’s degree student in Buck’s lab. She is now pursuing her Ph.D. at Jacobs University in Bremen, Germany. 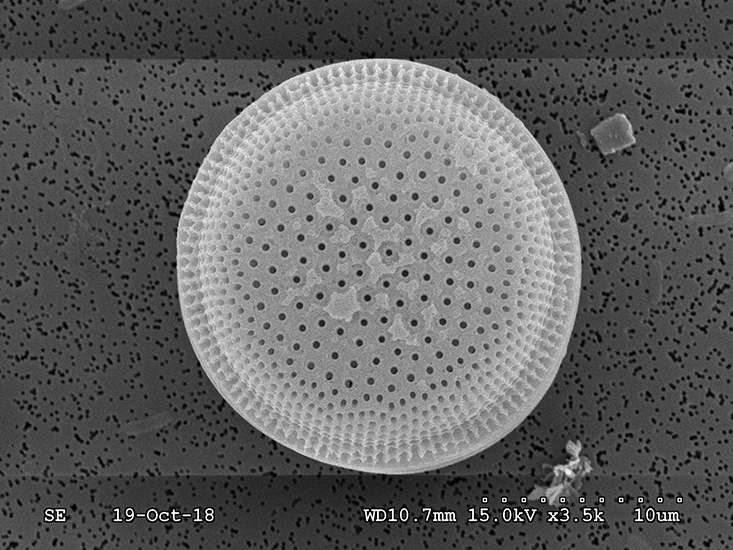 The team observed the phytoplankton cultures using a scanning electron microscope. Diatoms such as the one shown here were among those phytoplankton that were easiest to see because they have cell walls made of silica glass that preserve well for microscopy. (Credit: Tony Greco, USF CMS)

In addition to tracking the nutrients nitrogen, phosphorus and silica, Hollister and team tracked a suite of trace metals including manganese, iron, cobalt, nickel, copper, zinc, cadmium, and lead. They also tracked levels of chlorophyll a, particulate organic matter, and prokaryotic cells like bacteria and archaea, which break down the phytoplankton when they die. Then they performed genetic analyses to identify specific microbial species involved in trace metal regeneration, and examined the phytoplankton cultures using a scanning electron microscope.

“Our observations were consistent with what we expected for many elements, though in several cases this was the first time we really saw these relationships in natural communities,” Buck said.

The experiment allowed them to isolate the process of regeneration with respect to time. A key factor not accounted for in the study was ocean circulation mixing, which also influences what happens to trace metals in the water column.

“Although these experiments could not replicate the exact conditions of the ocean water column,” Hollister said, “they provide valuable insight into the role of regeneration in trace metal and macronutrient cycling.”

Trace metals: not a ‘one size fits all’ story

Results confirmed that some trace metals, such as cadmium, are governed primarily by the life and death of phytoplankton and follow the same classic depth profiles as macronutrients: low at the surface and increasing concentration with depth. But others, such as lead, iron, and manganese, are also subject to scavenging as well, whereby they attach to other particles, said Hollister.

One intriguing result confirmed what another team recently reported in a trace metal study that focused on sediments, not phytoplankton (Cheize et al., 2019). In both studies iron, a critically important trace metal for phytoplankton growth, exhibits a close relationship with manganese.

The dots and squares show how concentrations of dissolved iron (left) and manganese (right) changed over time in the three mixed batch cultures of phytoplankton from the Gulf of Mexico that were used for the experiment (M1, M2 and M3). The negative numbers represent the time that the phytoplankton spent growing before the regeneration experiment in the dark. Scientists hypothesize that once phytoplankton die, iron is quickly scavenged by manganese oxides – accumulating in the water column only when manganese is depleted.

The running hypothesis is that once phytoplankton die, iron is quickly scavenged by manganese oxides – accumulating in the water column only when manganese is depleted. Remarkably, the time it took for this chemical process to occur was about the same in both studies, Buck said, perhaps suggesting that this relationship is widespread in the oceans.

But several questions remain. “One thing we know for sure is that trace metal regeneration is not a simple process,” Buck said, “and our experiments provide plenty of fodder for more studies so we can better understand these relationships.”

The team encountered a head-scratcher in the nutrient data, Hollister said. It’s been well established for decades that phosphorus and silica exhibit different behaviors in the water column, she said.  Using the language of ocean chemists, phosphorus and silica are decoupled. Silica, a nutrient that is as critical for diatoms to build their cell walls as calcium is for human bones, takes a longer time to regenerate than phosphorus does. It is usually found a lot deeper in the water column than phosphorus.

“But in our experiment, silicic acid and phosphate were closely coupled as they regenerated, which indicates a shared regeneration pathway,” she said.

“I wish we could have run the experiments longer,” said Hollister, “but this was a good start to understanding what controls the cycling of nutrients in the world’s oceans.”