Toward a New Theory of Turbulence

A new theory proposed by two scientists, called the Quasi-Normal Scale Elimination (QNSE) theory, holds great promise to revolutionize the physics behind turbulent flows in the atmosphere and ocean. This image was taken by crew members aboard the International Space Station when they flew above the northwestern Pacific Ocean. Credit: NASA

ST. PETERSBURG, FL – Anyone who has had to buckle up during a turbulent flight or hunker down during a choppy day on the water understands that Earth can be a bumpy place. Getting a handle on the physical laws that govern turbulence has been a rough road for decades – but two physicists have just taken what feels like a giant leap forward.

Boris Galperin, PhD, associate professor at the USF College of Marine Science and Semion Sukoriansky, PhD, a professor at the Ben-Gurion University in Israel have been building a new theory of turbulence called Quasi-Normal Scale Elimination (QNSE). They recently applied their theory to rotating flows and saw remarkable alignment between the theory and observations, as reported in the journal Physical Review Fluids. 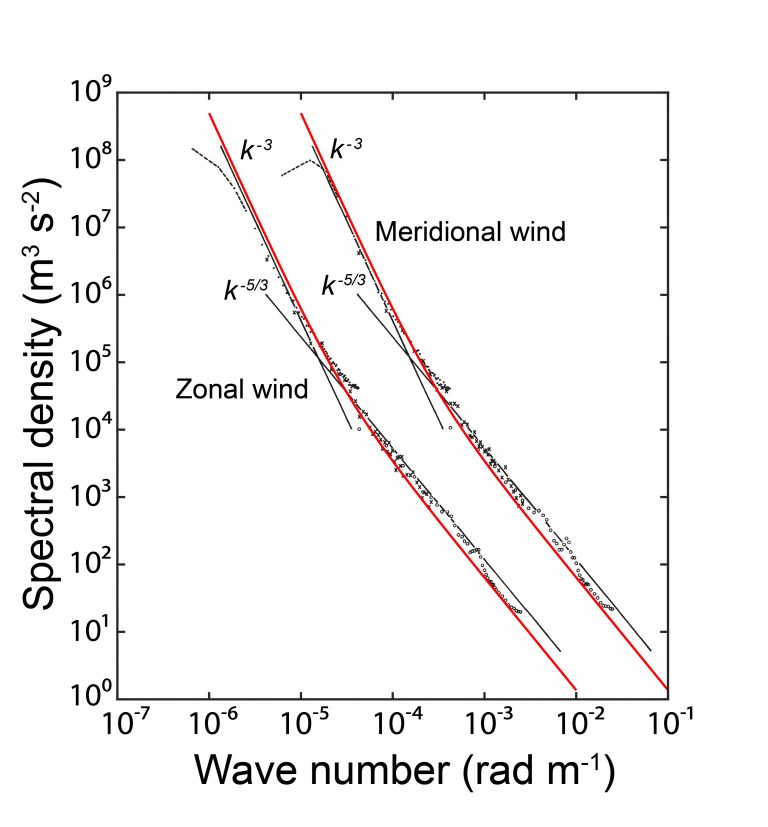 Spectra of the zonal and meridional velocities in the troposphere obtained from airplane measurements. The spectrum for the meridional wind is shifted one decade to the right. Red lines are the QNSE analytical solutions; black dots are the measurements. Straight black lines show Kolmogorov’s −5/3 and synoptic −3 slopes.

“This paper has been a product of a multi-year effort. The theory is already complicated enough, and comparing its outcomes to various data sets was a really prolonged endeavor,” said Galperin.

The kinetic energy of atmospheric and oceanic circulations is distributed across the scales of motion according to certain physical laws called energy spectra. When plotted in log-log coordinates, these spectra can be approximated by straight lines with certain slopes. Many theories have been developed to explain these slopes, but they have fallen short. The gold standard for decades has been the Nastrom & Gage spectra, developed based on a spate of observations in the upper troposphere and lower stratosphere using commercial aircraft.

In the new study further testing the QNSE theory, Galperin and Sukoriansky’s results aligned almost perfectly with Nastrom & Gage. What’s more, they saw agreement between the theory and observations in the amplitudes, in addition to the slopes. The latter is far more difficult to achieve and usually a good indicator that scientists captured the physics correctly, said Galperin. 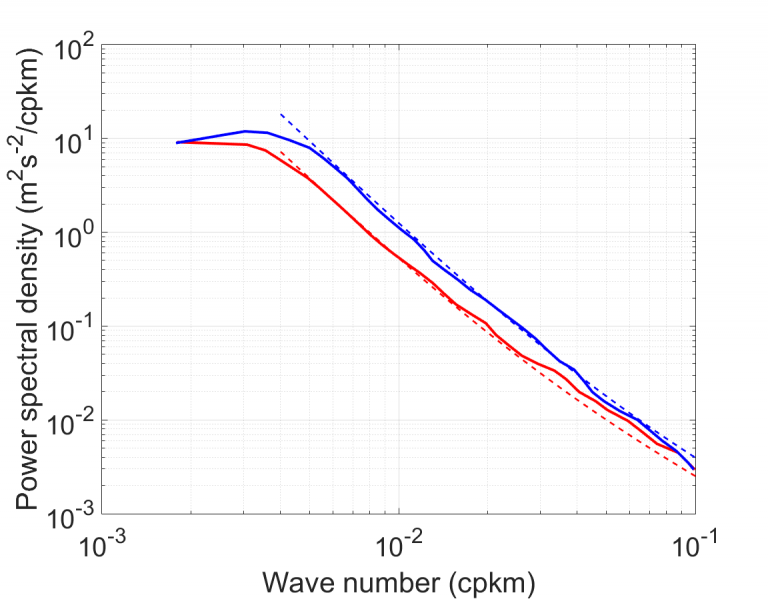 The solid lines show the velocity spectra south of the Gulf Stream meander, at a depth of 30 m, collected from observations using a ship-board ADCP. The dashed lines are the theoretical QNSE results.

“The physical laws underlying QNSE are quite general and we felt that they should equally apply to atmospheric and oceanic flows,” Galperin said. To validate this hypothesis, they compared what would be predicted by QNSE with numerous spectra measured in the ocean using ship-mounted acoustic doppler current profilers, or ADCPs – and wallah, the agreement between the theory and oceanic measurements was as good as in the atmosphere.

“This was the first time we demonstrated alignment between the oceanic and atmospheric turbulence,” Galperin said.

According to the QNSE theory, the effect of rotation is so strong on energy spectra that it modifies the structure of the nonlinear interactions that occur between different modes. For the physicists out there, they begin to behave such as if the spatial dimension of the flow was larger than 2 but smaller than 3. Such flows, classified as flows with “compactified dimensionality,” have received a lot of attention recently. They can feature energy cascades to large and small scales simultaneously and reveal other features not seen in conventional turbulence.

“This study opens up a wide gate for follow-up research,” Galperin said.

The team has been further validating their theory by performing experiments in a large rotating tank located at the University of Turin in Italy.

“It appears that the experimental spectra agree with the QNSE predictions over two decades,” Galperin said. “This was unexpected because we intended to study a different phenomenon. However, such a good agreement between the theory and the experiment is a dream come true for any theoretician. We are still working on the data, but if this result stands, we shall have a very solid theory of oceanic and atmospheric turbulence that should influence future developments in the entire field of geophysical fluid dynamics.”