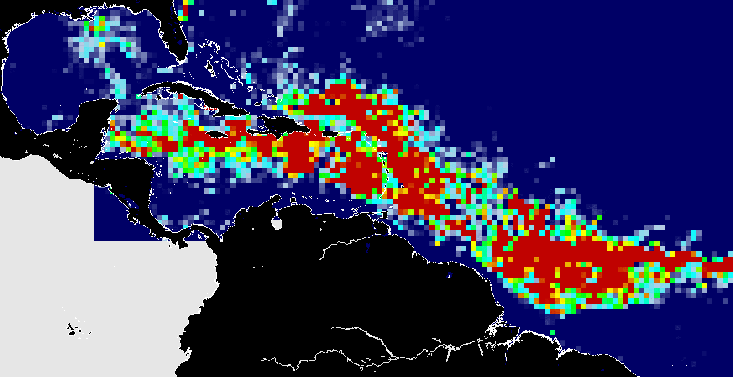 USF scientists use NASA satellite images to track Sargassum, a brown seaweed. In June 2021 (shown above) they found it in record-high amounts in the Caribbean, central west Atlantic Ocean, and Gulf of Mexico.

Scientists at the USF College of Marine Science who have used NASA satellite imagery to track Sargassum, a brown seaweed, for 20 years, are detecting record-high amounts in the Caribbean, central west Atlantic, and Gulf of Mexico. The bloom is essentially the same size of the largest Sargassum bloom ever recorded in history in 2018. 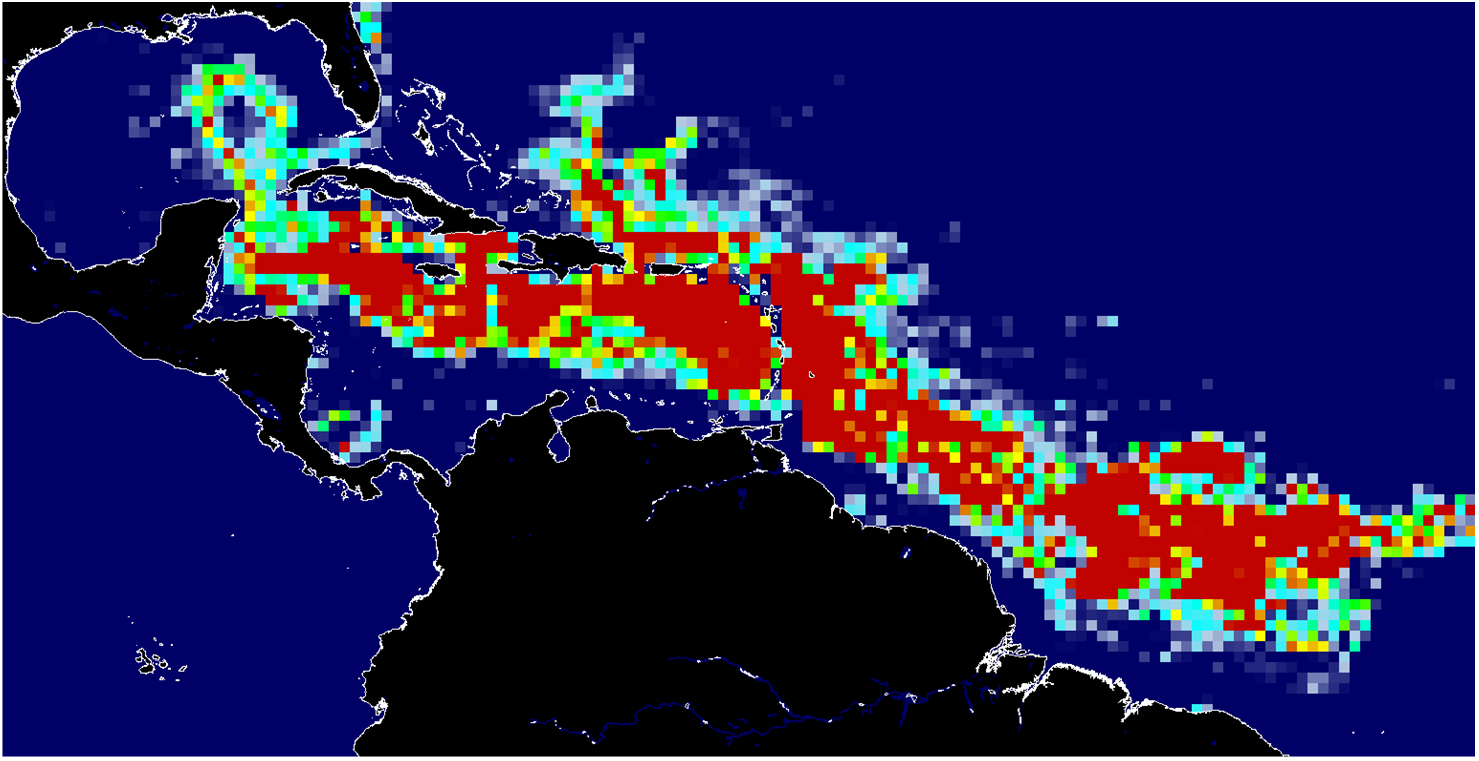 This satellite image shows the largest Sargassum bloom ever recorded in June 2018. It looks similar to the image above for June 2021.

“This year is shaping up to be a banner year for Sargassum,” said oceanographer Chuanmin Hu who leads the USF team.

Blooms of the macroalgae occur every year, usually in spring and summer, but this year’s season has proven unusual. “The bloom in May grew to a size that was bigger than any we’ve ever seen in that month before,” said Hu, whose team released its latest monthly forecast on June 29th.

While the May bloom was mostly confined to the Caribbean and central west Atlantic Ocean in May, in June it spread significantly in the Gulf of Mexico, too, with the amount nearly doubled that in May. 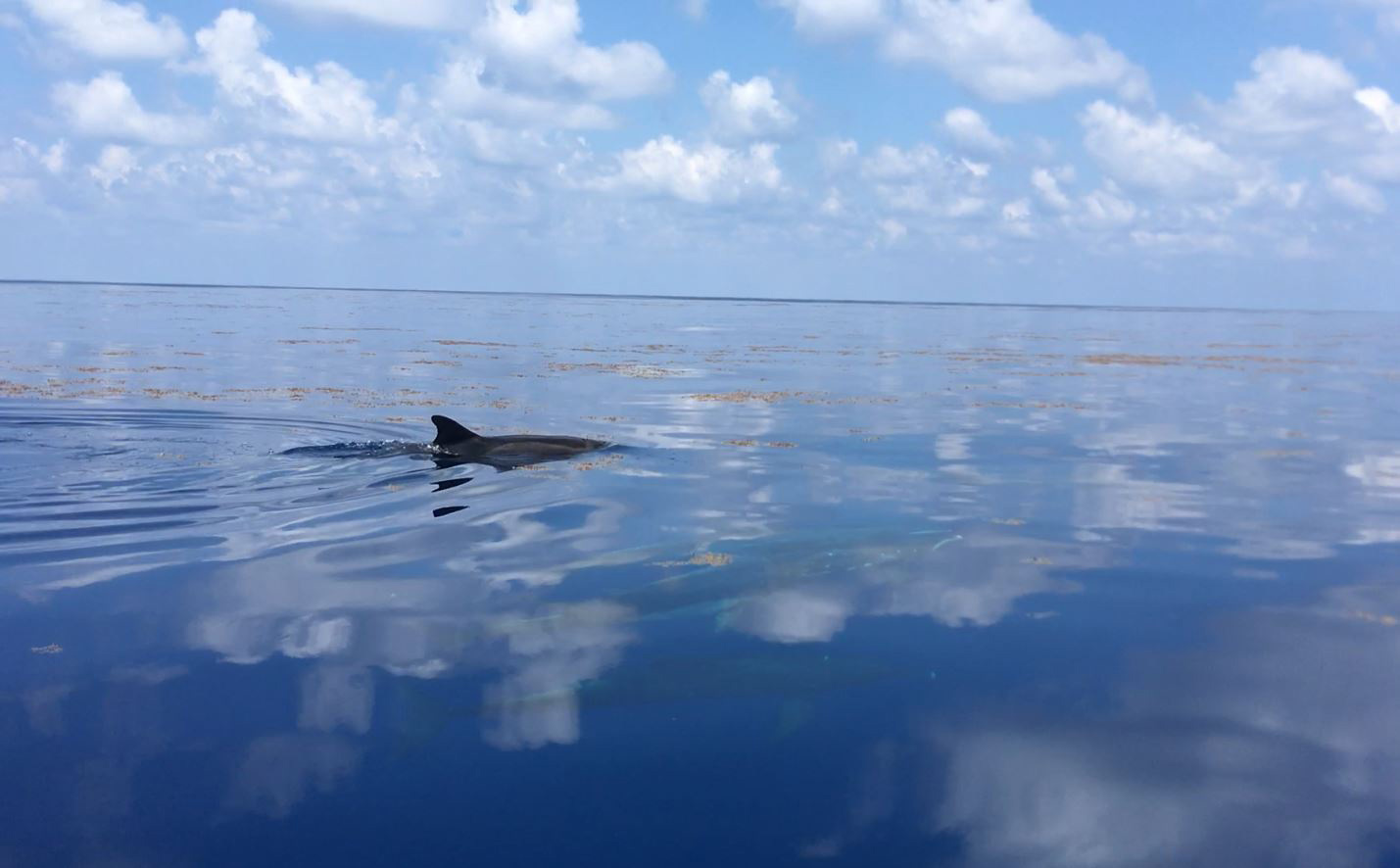 Another anomaly this year is that tendrils of the Sargassum bloom, carried by the Loop Current in the Gulf of Mexico, have already reached areas it usually didn’t reach until later in the season, such as the mouth of the Mississippi River.

“We can’t predict exactly where the beaching events will occur, but we know there are more of these events to come. It’s heartbreaking to see this large bloom at a time when some of the pandemic-related travel restrictions have finally lifted regions that rely so heavily on valuable tourism dollars,” he said.

The record high amount of Sargassum detected by the team in June 2018 weighed in at about 20 million tons – heavier than 200 fully loaded aircraft carriers. Hu and his team reported the bloom in Science, calling it the Great Atlantic Sargassum Belt. Within the belt, seaweed mats scattered on the surface of the tropical Atlantic Ocean from the west coast of Africa to the Gulf of Mexico and wreaked havoc on shorelines lining the tropical Atlantic, Caribbean Sea, Florida Keys, and east coast of Florida. This year, the bloom is similar to that of 2018 in many ways. 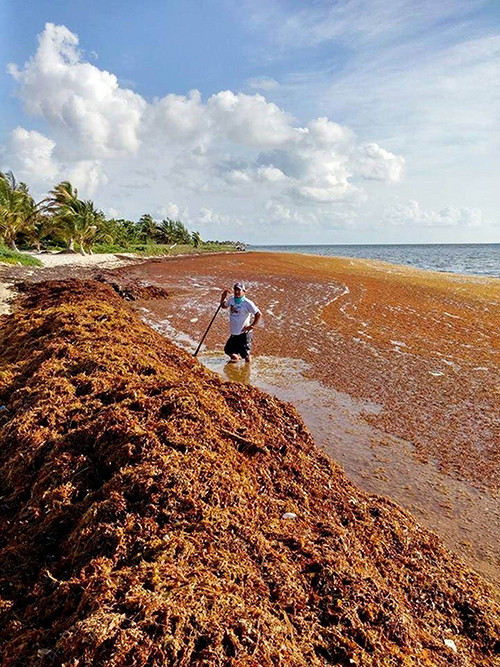 Too much Sargassum can present challenges for marine life and particularly becomes a problem when it collects along coastlines and rots, as shown here in Cancun in 2015. Credit: Michael Owen.

“We don’t know exactly what drives the annual changes of these Sargassum blooms,” Hu said, but since 2011 they have documented blooms in places it had never been before.

One factor – likely one of many, he said – is nutrient input from fertilizers, runoff, the deep ocean, the atmosphere, and more. A team led by scientists at Florida Atlantic University that included work by Hu recently reported a 35 percent increase in the percentage of nitrogen detected in Sargassum tissues between the 1980s and the 2010s in Nature Communications.

“That’s a clear sign of nutrient enrichment in the environment,” said Hu, “but we don’t have all the answers yet.”

In low doses, Sargassum contributes to ocean health by providing habitat for turtles, crabs, fish, and birds and producing oxygen like other plants. But too much of this seaweed makes it hard for certain marine species to move and breathe, especially when the mats crowd the coast. When it dies and sinks to the ocean bottom in large quantities it can smother corals and seagrasses. On the beach, rotten Sargassum releases hydrogen sulfide gas and smells like rotten eggs, potentially presenting health challenges for beach-goers. 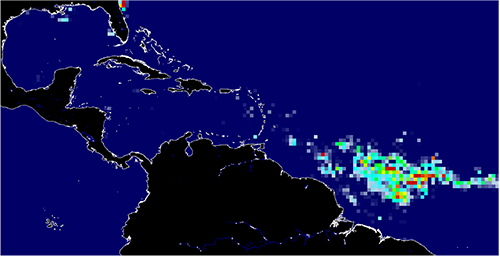 Hu will share the next update at the end of July. “We definitely need to spend more time and effort on understanding the ‘why’ behind these blooms,” he said.