A Cruise of Many Firsts 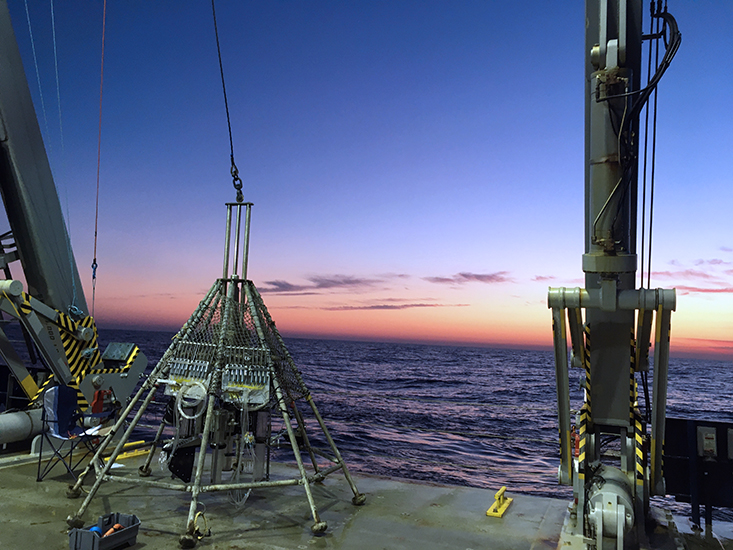 This multicore was sent to the seafloor to collect water samples from porewaters and take sediment cores.

On the morning of November 30, 2020 the R/V Sally Ride of San Diego disembarked for a nine-day cruise in the Pacific Ocean. On board were three members of Robert Byrne’s chemical oceanography lab at the USF CMS: grad students Katelyn Schockman and Kalla Fleger and researcher Sherwood Liu, PhD.

They were excited for the start of the voyage itself, but it had not been the beginning of their cruise journey. Thanks to COVID, that journey began much earlier.

Cruises in the time of COVID require special protocols and enhanced protection of crew members to ensure there would be no infections on board. As the first cruise since the beginning of the pandemic to include cross-country travel, the protocols were enhanced. For the USF crew, this meant quarantining at home in Florida for a week, testing negative, flying to San Diego, disembarking from the plane and immediately getting tested - luggage in tow.

After arriving in California, there was still another round of quarantine, where crew members spent a week isolated in a hotel in San Diego, waiting on negative tests and teleconferencing – all while living in the same hotel -- about the cruise plan they would eventually follow when finally, safely, on board.

For the USF members contingent of the crew, which included scientists from Cal State and USC, morale was high despite less than ideal circumstances.

Schockman, a PhD student, was cheery about spending Thanksgiving in a hotel room. “It was awesome, we got a new menu every day,” she said. The anticipation of being on the cruise was a helpful light at the end of the quarantine bubble, she said, adding, “If you had to be quarantined, San Diego is a pretty nice spot to do it.”

For PhD student Kalla Fleger, the wait was worth the experience at sea. It was her first research cruise. She knew there was a lot to learn but running on a treadmill, for example, was not a challenge she’d anticipated. “It’s a lot of trying to keep your balance and not running into the front of or off the treadmill when the waves would roll. It was fun!”

The research goal of the cruise was to test a piece of equipment that Researcher and Lab Manager of the CO2 Chemistry Lab Sherwood Liu, PhD, had specifically designed for this collaborative project with California State University and University of Southern California. The project was a few years in the making. “They called on us because of our reputation in measuring pH and TA (total alkalinity) and challenged us to measure these from extracted water with a very small sample size,” said Liu.

MICA, or multiparameter inorganic carbon analyzer, was developed by Liu and is used to measure multiple carbon parameters such as pH, TA, and dissolved inorganic carbon within marine environments.

Liu’s goal was to alter the already successful MICA instrument he had developed in Byrne’s Lab. “We met their challenge by producing mv-MICA instrument (minimal volume multiparameter inorganic carbon analyzer),” he said.

This cruise was the first to test the new technology, but it will not be the last, as the group from CMS plans to join three longer cruises in different regions, including an international collaboration in Costa Rica.