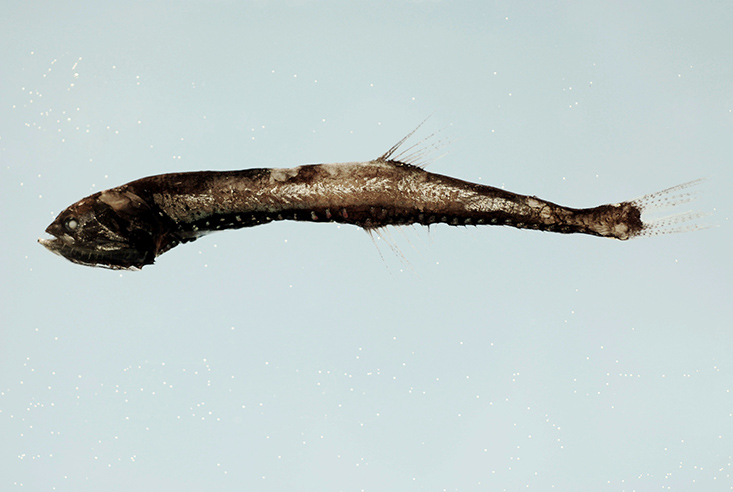 A species of Cyclothones, or bristlemouth fish, that lives in the deeper parts of in the Gulf of Mexico. It is the most abundant fish on the planet but on the recent DEEPEND cruise, relatively few were found. Credit: SEFSC Pascagoula Laboratory; Collection of Brandi Noble, NOAA/NMFS/SEFSC.

The snapshots taken in 2010 after the Deepwater Horizon disaster spewed millions of barrels of crude oil into the northern Gulf of Mexico were seared into our brains: blackened white pelicans stumbling along the shorelines, sea turtles gasping for air amidst sludgy seaweed, bloated baitfish bobbing in the murky waves.

And who can forget the image of the dolphin pushing her dead newborn in the water, as if trying to nudge it back to life? The bottlenose dolphin population in Barataria Bay off Louisiana was particularly hard hit by the oil spill and suffers to this day.

It was the largest oil spill in history and many of its impacts on marine life were in plain sight.

But what about the animals that we couldn’t see, like the ones who live offshore in the deep pelagic zone closest to where the blowout actually occurred? The Deepwater disaster was aptly, if ironically, named; the rig failure occurred at 1500 meters depth, at about 40 miles offshore.

Lots of critters live here, where the sun doesn’t shine. What happened to them?

“What we saw really surprised me,” said Isabel Romero, a geochemist at the USF College of Marine Science (CMS).  “The animals we used to retrieve all the time from the deeper parts of the Gulf were just barely found.”

While based on qualitative observations alone, the early news is not encouraging. 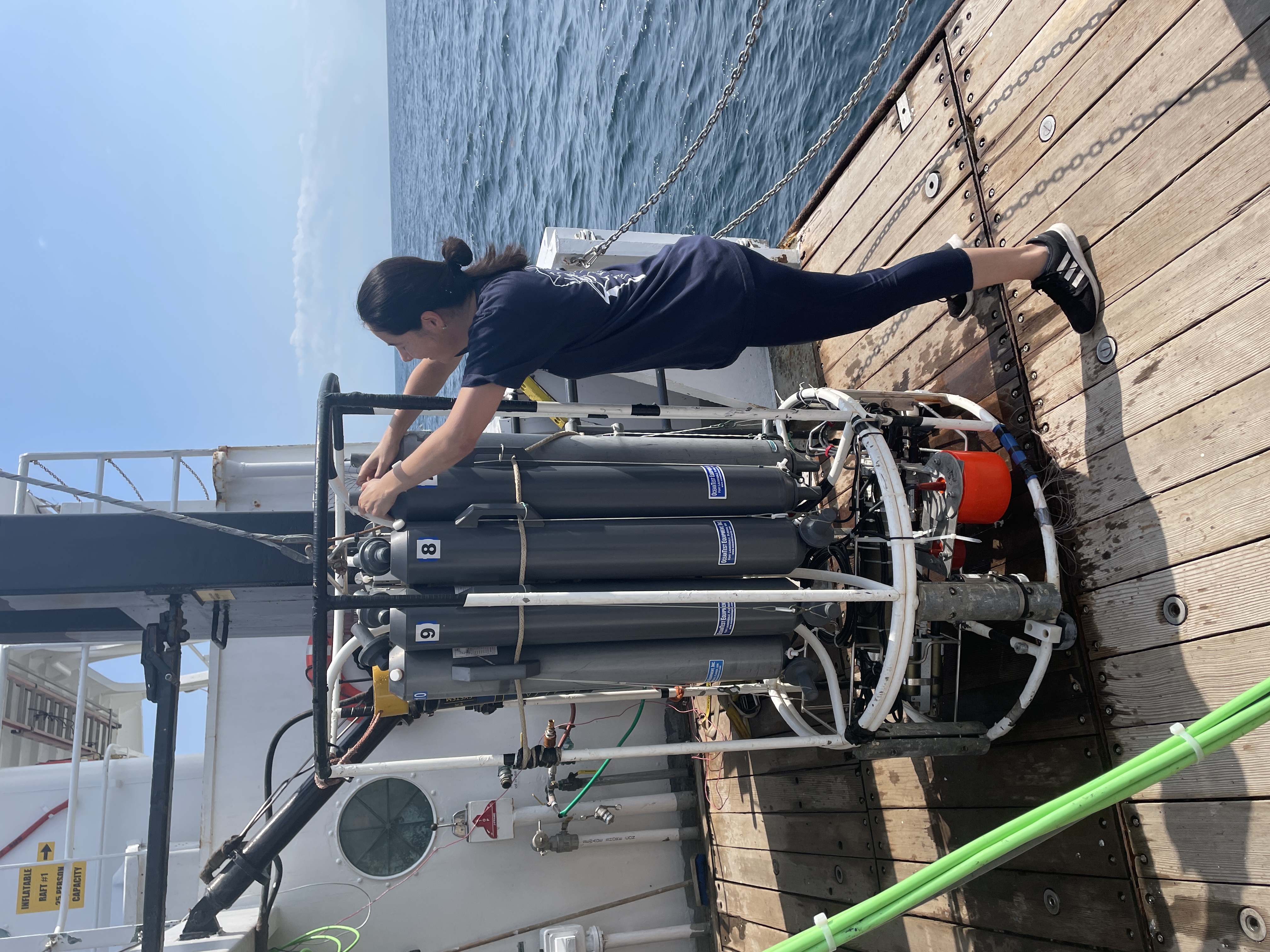 Romero returned with her colleagues at the end of May from a research cruise related to the DEEPEND research consortium (DEEp PElagic Nekton Dynamics; more on the nekton in a bit). She’s a principal investigator on this program, led by CMS alum Tracey Sutton, a scientist based at Nova Southeastern University.

DEEPEND, like C-IMAGE led by the CMS, was funded by the ten-year Gulf of Mexico Research Initiative (GoMRI) set up in response to the spill from 2010-2020. The DEEPEND team recently published a compendium sharing what they learned in the first phase of their work (2015-2020).

The recent cruise was the first of three funded by the NOAA RESTORE program through 2024 for DEEPEND’s phase two. The team, which included Heather Judkins, a marine biologist on the USF St. Petersburg campus, sailed for 12 days in the northern Gulf of Mexico aboard the R/V Point Sur. They used a midwater trawl (10 meters by 10 meters) and acoustic equipment to help identify population trends in the small to middle-sized deep sea pelagic organisms that inhabit some of the deepest part of the Gulf.

“I just can’t believe the declines we saw,” Romero said.

The small but mighty: out of sight, but not out of mind

The pelagic environment – a cold, dark place between about 200 meters depth to more than 1000 meters depth – is the largest ecosystem on Earth by volume, biomass, and productivity. Here, a kaleidoscope of small, cool-slash-weird fishes, shrimps, jellies, and cephalopods such as squids – collectively called micronekton – comprise an important bulk of the neighborhood. Most are about 1-8 inches long.

Many of these minis perform the world’s largest daily migration at night: they travel from depth up to shallower waters for a midnight snack and then they head back down during the daytime to avoid becoming a snack for others. Micronekton provide a critical link between the animals that live in the deepest depths and those at the surface (including megafauna such as whales and commercially important species) – but relatively little is known about them. Their world was already a kind of black box, even before the oil spill occurred.

Getting a handle on how the population has changed – when we weren’t all that clear on the details of where it started – is tricky. It’s easier to make generalizations, however, when you’re starting out with the largest ecosystem on the planet. Some scientists have estimated that the global population of micronekton fish alone is 45 times the weight of the global human population.

One of the stunners on the recent cruise, said Romero, was the marked lack of Cyclothones recovered in the trawl nets. Cyclothones, or bristlemouths, are the most abundant fish – no, the most abundant vertebrates! – on the planet.  These shiny three-inch-long fish were so common in deep ocean waters that in the 1950s submarines picked them up on sonar.

“And yet this time, we didn’t catch that many at all,” Romero said.

Other species that were notably lacking in many samples were eel larvae, which look like giant transparent ribbons; pteropods, which are molluscs with external shells that look like swimming crystals, Romero said; and jellies.

“Jellies are usually everywhere,” Romero said, “and yet this time I think we caught about five of the species we are studying.”

The DEEPEND team estimates the population of micronekton in total has plummeted by 50-90 percent since the spill, said Romero. While this figure is based on qualitative observations alone (the quantitative statistical analyses are not yet complete), it still stuns.

So, what’s going on?! We’ve only got one explanation, Romero said.

“I do think what we see as a decline in most taxa may be a response to the spill,” said Romero. Even all these years later.

After any kind of environmental disturbance – from wildfire on land to spills in the sea – basic ecological principles suggest that scientists will see a shift in species diversity. Disturbances create opportunities for less common species to shine, at least for a time, until the system regains its balance and returns to a more stable community.

Everything in the deep, cold sea operates at a slower pace. Animal metabolism is even slower so deep-sea animals would process toxins at a slower rate than shallow water animals.

“In general we predict that deep sea recovery is slow,” said Romero.

But there could be more to the story.

In 2018 Romero was the first to confirm in a publication in Environmental Science & Technology, that some micronekton fish pass on toxins to their babies. It’s called maternal transfer. While many fish can process oil in much the same way as our livers process alcohol and cheeseburgers, some gets stored in fatty tissues and can end up in fish eggs.

Could the same thing be happening in other micronekton species?

Romero recalled her shrimp samples from a 2016 DEEPEND cruise. It was a mystery for her at the time that some shrimp had contaminants, and others – who lived in the same area – did not.

“They had the same diet, same ecology, and all of that,” she said. “It didn’t make sense.”

“Maternal transfer is so far the only explanation that explains the high declines in all of these deep-sea animals,” she said.

That’s why Romero so beyond bummed that she didn’t get a lot of samples on this recent cruise. There’s still a long way to go to be able to confirm that hypothesis with hard data, but if anyone is on it, it’s Romero.

“We definitely need more long-term studies,” Romero said.  “We’re just scratching the surface here by studying only the micronekton. An even bigger question remains to answer, if the drastic declines detected in micronekton species are also observed in deep pelagic nekton species, an even less studied group.”

Enjoy a slideshow of some of the micronekton studied on the recent DEEPEND research cruise.