Dr. Steve Murawski is leading a team from the USF College of Marine Science and partners who will use the towed C-BASS visualization system, multibeam and water column sonar to contribute to the project. Shown here is a stunning painting of Amberjack by Diane Peebles. © Diane Rome Peebles.

(OCEAN SPRINGS, Miss.) – A team of scientists, selected through a peer-review process organized by the Mississippi-Alabama Sea Grant Consortium, will conduct an independent study to estimate the number of Greater Amberjack in the U.S. waters of the South Atlantic and Gulf of Mexico regions. The team will also investigate the fish’s movement and how it is distributed by habitat, including artificial, natural and uncharacterized habitats.

The research team, made up of 18 scientists from 13 institutions, was awarded $9 million in federal funds for the two-year project. With matching funds from the institutions, the project will total $11.7 million.

“The Greater Amberjack abundance study in the South Atlantic and Gulf of Mexico is one way Sea Grant is helping to ensure a safe and sustainable supply of seafood products for current and future generations,” said National Sea Grant College Program Director Jonathan Pennock. “This project will provide valuable information for the management of Greater Amberjack as well as insight useful to future fisheries research and engagement.”

The selected interdisciplinary research team includes geneticists, modelers, statisticians, ecologists and oceanographers from North Carolina to Texas. Project leader Sean Powers, chair of the Marine Sciences Department at the University of South Alabama and a senior marine scientist with Dauphin Island Sea Lab, said many of the project researchers have worked together for more than 20 years and have helped advance the science that makes these large-scale studies possible.

Many team members also were part of the Great Red Snapper Count, a recent study that estimated the abundance by habitat type of red snapper in the U.S. Gulf waters.

“We build on a lot of lessons learned from the Great Red Snapper Count,” Powers said. “We know what we did pretty well, and we know what we have to improve. This one should be even better than the last.”

Steve Murawski will lead the team from the USF College of Marine Science. “Greater Amberjack are a premier sport and commercial fish of the Gulf and South Atlantic, and sustainable management requires solid estimates of stock size and harvest rates,” he said. “We at USF have a long history of sampling amberjack with traditional methods and more recently using an innovative towed video system.  We are thrilled to be working with the large, capable and diverse team of researchers on this important project.” 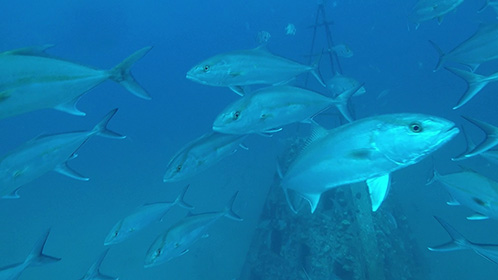 “I am pleased that the University of South Alabama and Auburn University have been selected as institutions awarded grant funding for the Greater Amberjack Abundance Study,” U.S. Senator Richard Shelby (R-Ala.), vice chairman of the Senate Committee on Appropriations, said. “This is great news for anglers along the Gulf Coast. The research grant will help resolve discrepancies in regard to Greater Amberjack stock assessments and inform researchers of the best ways to monitor these populations moving forward. Alabama scientists and researchers are leaders when it comes to reef fish management, and I am confident that this project will be successful as a result of their involvement.”

Anglers can participate in study

After synthesizing bottom habitat mapping, performing gear calibration studies and conducting a survey of fishermen to learn where they usually catch Greater Amberjack, the team will use several technologies including hydroacoustics, underwater cameras and remotely operated vehicles to count Greater Amberjack.

“A big portion of this project is what we call Traditional Ecological Knowledge,” Powers said. “We’ll be surveying fishermen with some cool web tools, where they can click on a map and show us, with as much resolution as they want, where they usually catch fish.”

The team will use the information to guide their sampling design, and the fishermen’s input will help them verify areas where the fish are not found and spend more time, money and effort in areas where there are fish to count.

The study will include high-reward fish tags worth $250 to anglers who return them and report catch locations.

Scientists also will use new Environmental DNA (eDNA) technology to try to correlate fish density with the amount of eDNA in the water. Scientists have used eDNA to determine the presence of species of concern, such as sturgeon and bluefin tuna, Powers said, and this study will determine if it is a viable option for abundance studies.

“We are not only going to get an abundance estimate of amberjack,” Powers said. “We’re going to try to figure out how we apply the latest technology to improve our ability to monitor fish populations in the future. We will look at which technologies are the most promising and which technologies work the best.”

The Greater Amberjack is an important recreational and commercial species in the South Atlantic and Gulf of Mexico. According to NMFS, the Gulf of Mexico stock of Greater Amberjack has been in an overfished state and undergoing overfishing for an extended period despite implementing a rebuilding plan. The South Atlantic stock is not overfished and not undergoing overfishing.

Scientists on the team include:

*This release was slightly modified from one generated by Melissa Schneider at Mississippi-Alabama Sea Grant Consortium and Lance Crawford at University of South Alabama.

For more information, go to http://masgc.org/greater-amberjack.