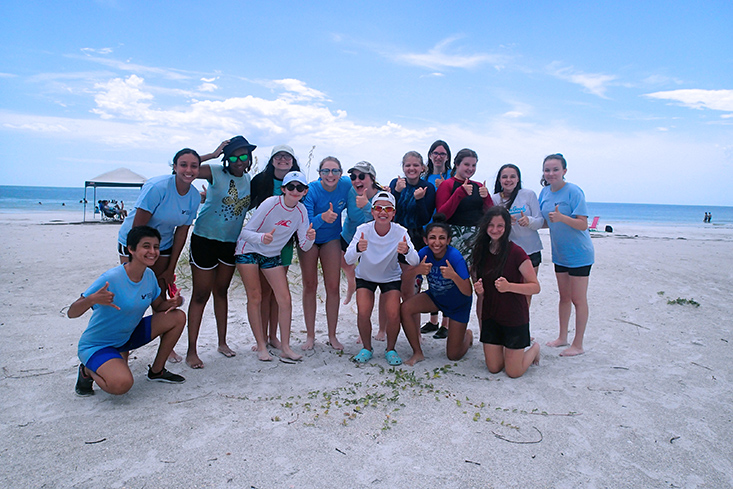 OCG campers have a few minutes on Fort De Soto beach to snap some quick pics before the afternoon storm rolled in.

It was the best of times, it was the greatest of times—the enjoyment at each of the two first sites of Fort De Soto didn’t vary, but the data definitely did! Our campers had the opportunity to compare and contrast two very different ecosystems at Fort De Soto: a calm site lined by mangroves, and a swift-flowing site abundant in seagrasses. At the two sites, OCG campers learned about the dominant vegetation, the nutrients in the water, and the fish that live there. They were able to make predictions of how nutrients and species would change from site to site based on the energy of that site. But, like all good scientists, our campers had to test their predictions and use their all of their senses to make observations. Yes, they even had to use their sense of taste! 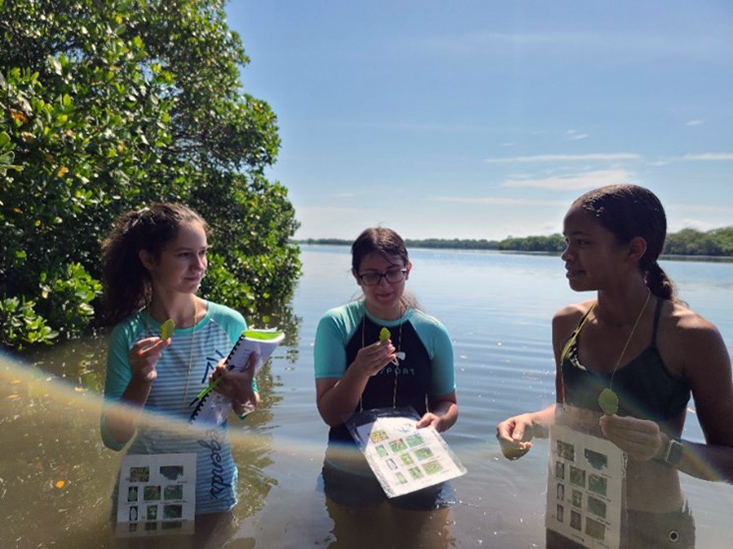 Campers Sara, Madison, and Jaleyah discuss the taste of the black mangrove leaf after licking one. The looks on their faces say it all! (Photo credit: Lisa Rose-Mann)

While sludging through the mangroves, campers were encouraged to lick a leaf of the black mangrove. You may be wondering “Isn’t licking random plants dangerous?”, and you would be right. You should never ever lick random plants. However, the black mangrove is not a random plant! They are known as “salt excreters” and have adapted the ability to remove salt through their leaves. The salt remains on the back of the leaf, and, as our campers found out, the leaf tastes extremely salty.

Our campers also had to compare the different species of fish found at the two sites. They did that by using a seine net, a large piece of sampling gear that is used to collect small fish and invertebrates. With only some grumbling and a lot of singing, the girls dragged the heavy net through the water at each of the sites and then identified and measured each of the fish caught. All of the campers got to hold the fish and observe the differences in species including differences in coloration, fins, and mouths. 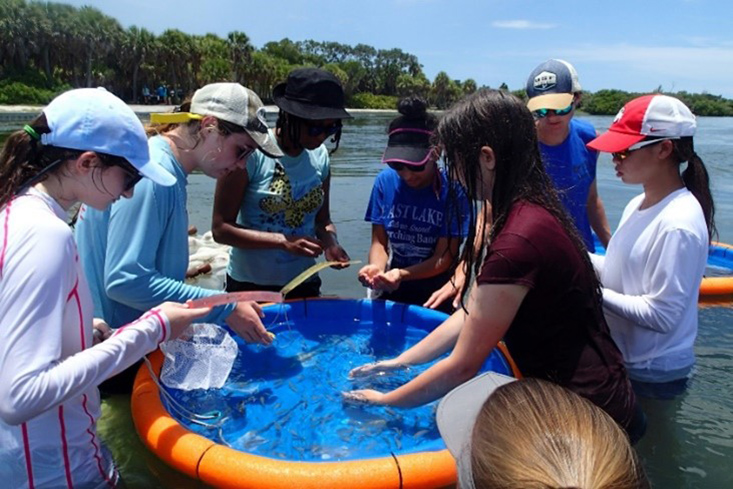 Campers work together to transfer fish from the seine net to the floating kiddy pool to measure and identify them.

So, what was the biggest difference between the two sites? We’ll have to wait until the campers interpret the data and make their graphs. But, I think it’s safe to say that the biggest similarity was the amount of fun that was had at both sites!