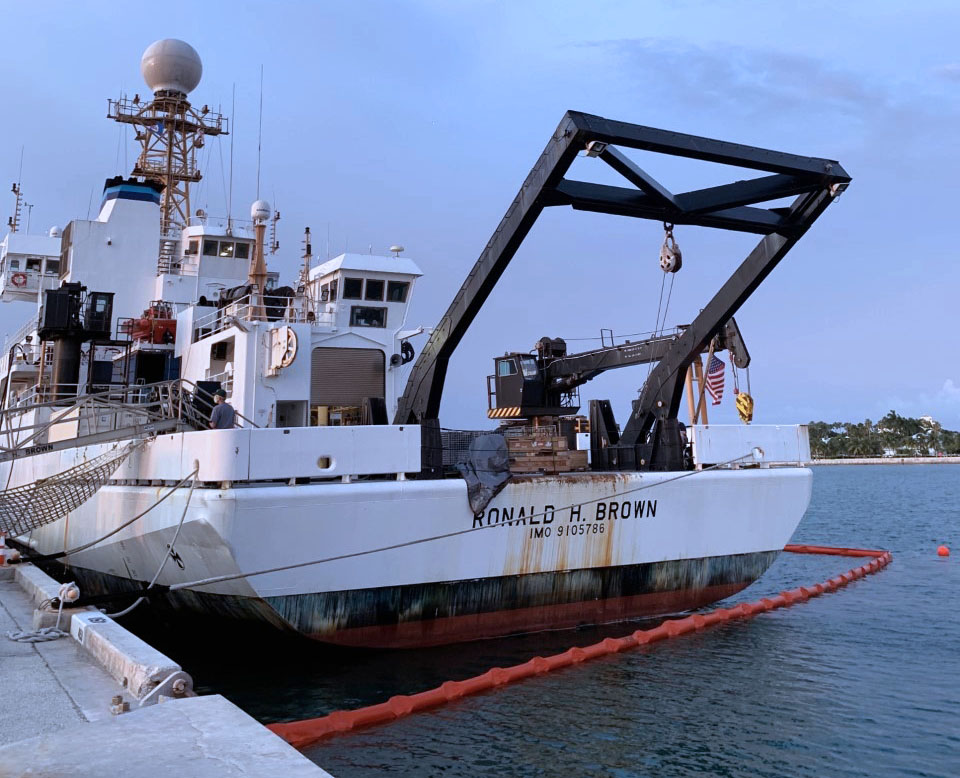 The RV Ronald H. Brown will be transporting the members of the GOMECC cruise throughout the Gulf of Mexico for 42 days.

A fourth GOMECC (Gulf of Mexico Ecosystems and Carbon) cruise departed on September 13th carrying three members of the Byrnes lab. The 42-day cruise collects data ranging from pH to zooplankton and bathymetry all throughout the Gulf as apart of NOAA’s Ocean Acidification Program. The shipboard team includes Macarena Martín Mayor, Loraine Martell-Bonet, and Juan Millan-Otoya, who are responsible for collecting pH and carbonate samples on board.

The cruise schedule is tight, with each day mapped out to maximize the time at sea, which means long days for each member of the 25-person crew. For these cruises, which run on a 24/7 schedule, each crew member has a specific and important role in their 16 hour shifts to ensure the maximum efficiency of the cruise.

“The typical day is wake up, eat, deploy a CTD, wait, collect the water samples from the CTD, analyze the samples, rinse, repeat,” said Mayor.

GOMECC is a part of NOAAs Ocean Acidification program that uses large scale repeated cruises to monitor changes in ocean measurements over time. Since its maiden voyage in 2007, students from the Byrne lab have been on every GOMECC cruise. “We are there to take state of the art pH measurements and carbonate samples,” said Millan-Otoya. “It is what we are known for.”

In addition, they are also testing a new DIC (dissolved inorganic carbon) machine that Sherwood Liu, PhD, a research scientist in the Byrne lab, has developed. Typically, measuring DIC - a measurement of total CO2 in water- is a time-sensitive task, requiring rotating samples to be collected at precise times, explains Mayor.

“This new machine is automated, so you just put the bottles in, and the machine samples the bottles for us,” she said.

International cruise brings another language on board

Countries surrounding the Gulf of Mexico - Mexico, the United States, and Cuba – have all had representatives aboard former GOMECC cruises, which is largely international in its crew. Mayor, Millan-Otoya, and Martell-Bonet, natives of Spain, Colombia, and Puerto Rico, respectively, are excited at the opportunity to speak Spanish on board with world-renowned ocean chemists.

“It’s so cool to be surrounded by people who speak Spanish and are experts in my field,” said Mayor. “I can’t wait to meet and learn from everyone!

In for the long haul

Millan has been on ocean observer cruises, with lengths of 105 days. “But that was before my family,” said Millan-Otoya, who is wondering how his 9- and 7-year-old will handle his departure. “They mostly have questions, like ‘where will you sleep?’, so it will be interesting to show them pictures of the ship.” 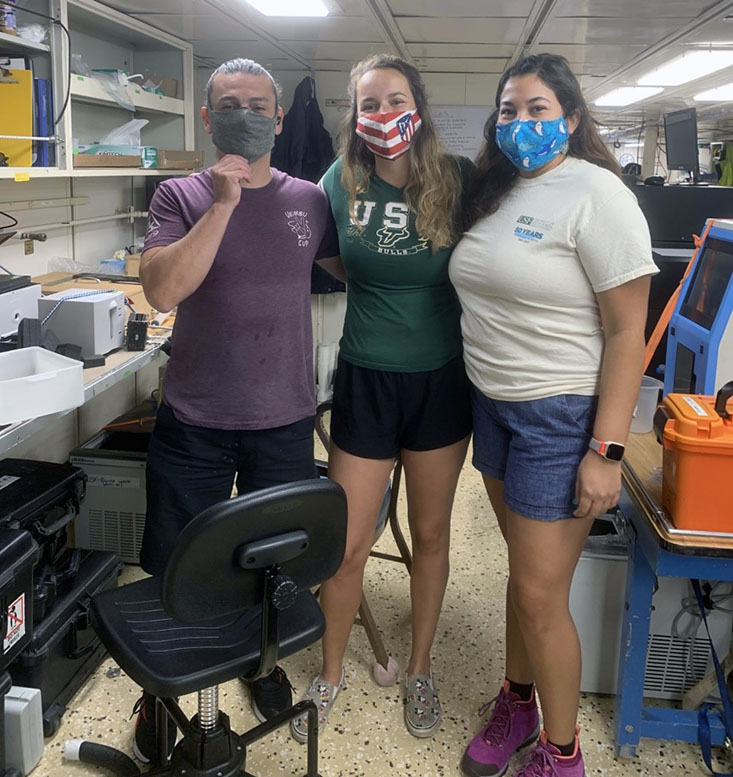 Byrne lab members Juan Millan, Macarena Martín Mayor, and Loraine Martell-Bonet who are responsible for collecting pH and carbonate samples on board.

This is the second long haul cruise on the RV Ronald H. Brown for Mayor, who learned some tips from her first time on board. Mayor’s advice for those who are undertaking a long cruise: bring snacks! “A healthy snack that you love after a long day raises the spirits so much,” she said.

The climate will be drastically different from the West Coast voyage as well. The hardest days on WCOA (West Coast Ocean Acidification cruise) were the rainy, cloudy days, said Mayor, who is excited to be in the sunnier climate of the Gulf. The only downside? The cruise takes place September 13th- October 21st, which is peak hurricane season in the Atlantic Ocean.

“That will be interesting to see, I wonder what the plan for that is,” said Millan-Otoya.

The cruise departed from Key West on September 13th, and we will be updating our social media with periodic photo updates of their journey as internet allows.