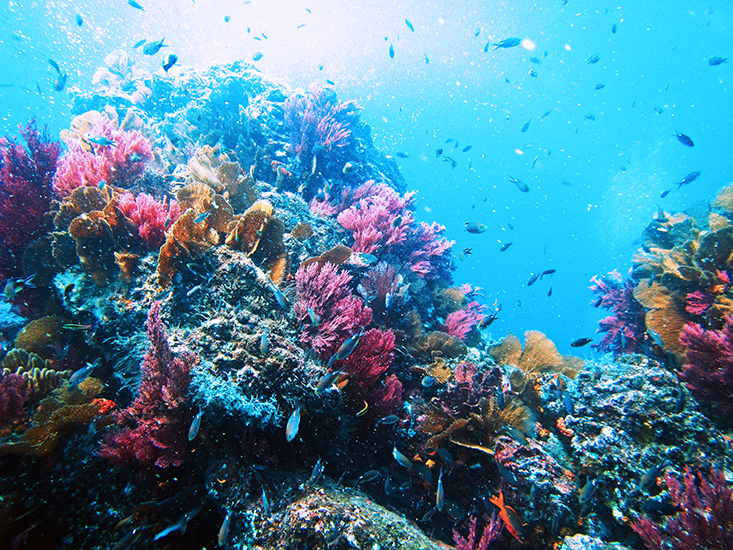 A weighty projection by the United Nations brings urgency to the need for robust, coordinated ocean observing systems across the blue planet: By the year 2100, if no significant changes are made in how we monitor and safeguard marine life, more than half of the world’s marine species may stand on the brink of extinction.

Just like for weather forecasting, long-term observing systems provide the critical scaffolding that helps scientists and managers make projections of the state of the ocean--pinpointing which areas of the ocean, and which species, require the most attention. Thankfully, there is a basic infrastructure of coordinated networks of observation platforms around the world. In the U.S., this includes the Integrated Ocean Observing System (IOOS), which launched a decade ago.

However, a recent study in Frontiers in Marine Science shows how inadequate this is to understand how marine life is changing at the scale of ocean basins and the global ocean. For oceanographers, it’s akin to the famous call from Apollo 13: “Houston, We’ve Had a Problem.”

“Our assessment indicates that the groups that conduct ocean observing around the world are largely uncoordinated, which results in a failure to deliver critical information required for informed decision-making,” states Erin Satterthwaite from Scripps Institution of Oceanography, the study’s lead author.  The team – a whopping 41 coauthors strong – includes Research Associate Enrique Montes and Professor Frank Muller-Karger from the USF College of Marine Science.

“We are very thankful for people involved in these scientific and monitoring programs for participating in surveys like these. Just knowing who is operating in which ocean area is an important step to start to coordinate and build a network that is useful to people in general,” said Muller-Karger.

In total, these programs covered a mere 7 percent of the ocean surface area. Most are concentrated in coastal regions of the US, Canada, Europe, and Australia. That leaves big holes off South America, Eastern Europe and the Caspian Sea, Asia, Oceania, Africa, the Arctic, and in the deep oceans – where who-knows-how-many species exist. Even worse is the lack of consistency in observations over time; different programs make measurements at very different intervals, ranging from every few weeks to every few years. 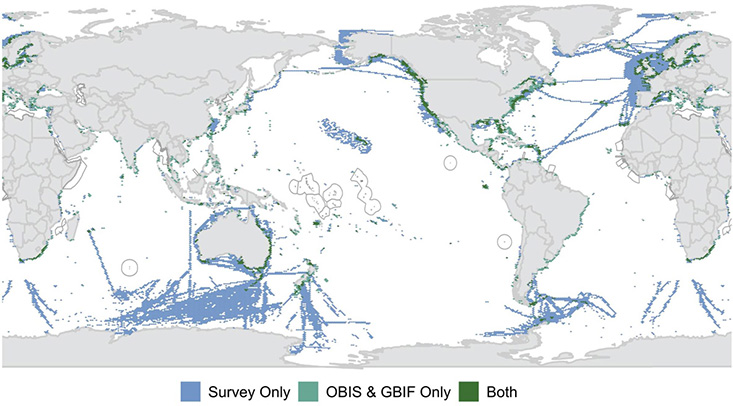 Spatial coverage of known active, long-term biological observations globally (colored regions). Color indicates biological observations identified from the survey only (blue), from datasets in the Ocean Biodiversity Information System (OBIS) and the Global Biodiversity Information System (GBIF) only (teal), and those identified in both sources (green).

Even amongst the platforms that exist for that small percentage of the ocean surface, the programs were not well connected. They use different methods to make measurements, format the data different, and use different databases for data storage. Plus, a large number of programs don’t share data externally or with the public.

“A major area for improvement is in the way the data are collected and shared as part of the ocean observing platforms,” said Muller-Karger. “For data to be useful it needs to follow FAIR principles: it must be findable, accessible, interoperable, and reusable.”

In total, the team summarized its recommendations in the following figure: 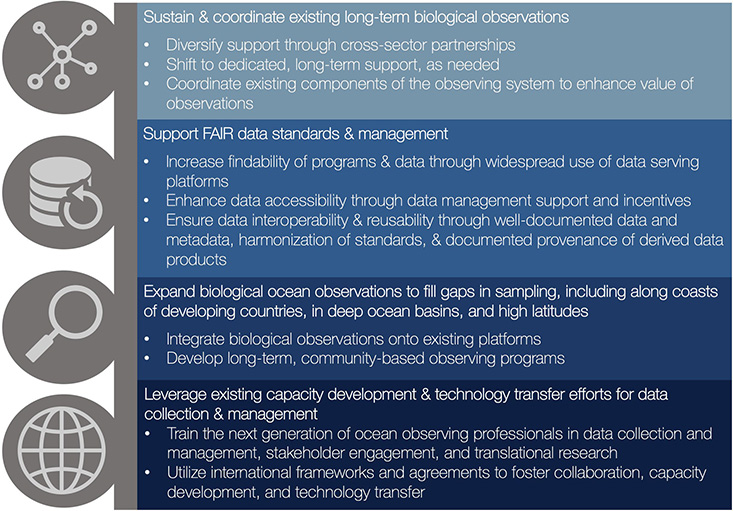 Possible future directions for a sustained, coordinated biological ocean observing system based on the results of this study.

These programs are critical to food security, human health, coastal protection, tourism and recreation, and more, said Muller-Karger. “We certainly can’t monitor the entire ocean 24/7/365, but we can and must make strides in making the data we can collect as actionable as possible.”