Investigating Whales Penguins and Seals on the Bottom of the World 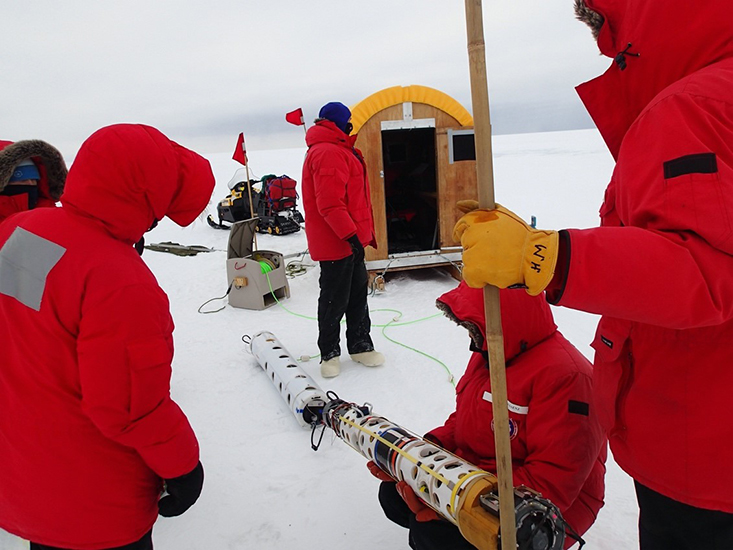 The SCINI ROV (in foreground) is being tested by a researcher prior to deployment, while the acoustic towed package is the white cylinder laying on the snow behind it. The Conestoga wagon “dry lab” is in the background. Photo credit: Stacy Kim.

McMurdo Sound, Antarctica, at the southern end of the ice-covered Ross Sea, is not home to many people. But it is a center of challenging but exciting research about whales, penguins and seals.

The Ross Sea is less affected by humans than any ocean region on the planet; commercial fishing on krill and fish limited to some northern areas. It was designated as a Marine Protected Area in 2017 with the primary goal of conserving marine living resources. The Ross Sea, despite its icy nature, is highly productive. Several large polynyas, regions of open water surrounded by sea ice, support a large abundance of top predators, such as killer and minke whales, Adélie penguins, and Weddell seals. Although scientists have known for more than a century – since early explorers first arrived in this area in their quest to reach the South Pole – that these top predators, little is known about their menu of choice. Which species constitute their prey?

Predator-prey interactions are challenging to study anywhere in the ocean, but are even more difficult to study in ice-covered seas. Due to increasing winds, sea ice extent and sea ice duration have been expanding, unlike some other regions of the Southern Ocean where sea ice is decreasing.

A few years ago I worked with then-postdoctoral fellow, Ben Saenz, and co-PIs from several other oceanographic institutions in the U.S., on a fascinating 2.5-month-long project (spring 2012 to summer 2013, spring 2014 to summer 2015) in this extreme location.

We  did not use an icebreaker ship to sample the water column under the sea ice. Instead, most camped out on the fast ice in a central location of McMurdo Sound and traveled to different sampling sites using snow mobiles, towing sleds with equipment, and one Conestoga Wagon on skis, similar to the wagons used in the late 18th and early 19th century in the U.S.  The Conestoga wagon contained a generator, heater, electronic equipment, computers and monitors - all of the comforts of a modern-day lab. 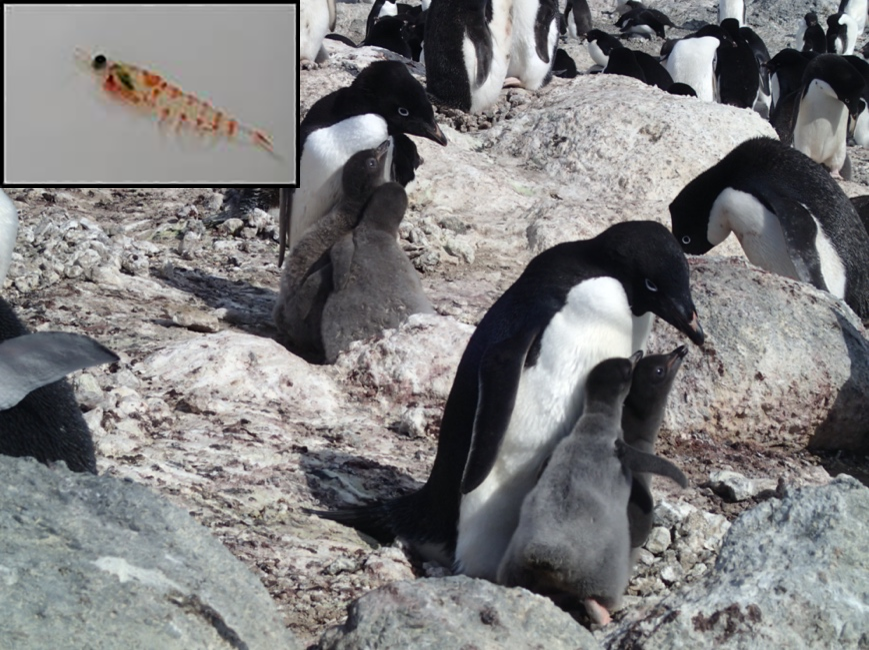 Adélie penguins feed their chicks by regurgitating the food they captured in the water column at the ice edge. Euphausia crystallorophias (crystal krill) shown in the inset is about 1.5 inches long and is one of the primary prey of penguins. Photo credit: Kendra Daly.

On station, a hole was drilled through the sea ice large enough to deploy the long, thin “SCINI” remotely operated vehicle (ROV) (see above). SCINI had video cameras and towed a package containing a high frequency acoustic echosounder (similar to a fish finder) and biological sensors, which were used to assess the abundance and distribution of prey (crystal krill and Antarctic silverfish) under the sea ice during spring and early summer.

Other members of the team worked out of McMurdo Station, analyzing water samples and data collected by the field team. Or, they were busy on the helicopter doing whale surveys. Just your average day on the bottom of the planet.

The remaining members worked at the nearby Adélie penguin colony at Cape Royds. Satellite bio-logging tags were placed on Adélie penguins and a minke whale to detect the timing, location, and depth of feeding. Penguin diet was monitored when adults returned to the nesting colony and fed their chicks. Whale abundance and feeding behavior were observed from helicopters and from land and the sea ice.

Throughout the study, krill abundance declined in surface waters as predation by penguins and whales increased at the ice edge. Instead, krill moved deeper in the water column at the ice edge and deeper under sea ice to avoid being eaten by air-breathing predators.  Silverfish increased in penguin diets when competition from krill-eating minke whales increased.

In total, the results showed that this region is a biological “hot spot” in which the prey are controlled by predation, instead of by environmental processes. Despite documented changes in the ecosystem due to climate and fishing, decades long studies indicate that to date penguin, seals, and whale abundances have remained the same or are even increasing in the Ross Sea.

Additional long-term studies are needed to separate the effects of climate from fishing extraction and their combined impacts on the Ross Sea top predators.

We published the following publications from this research project in 2020: