Life through the eyes of a Hogfish 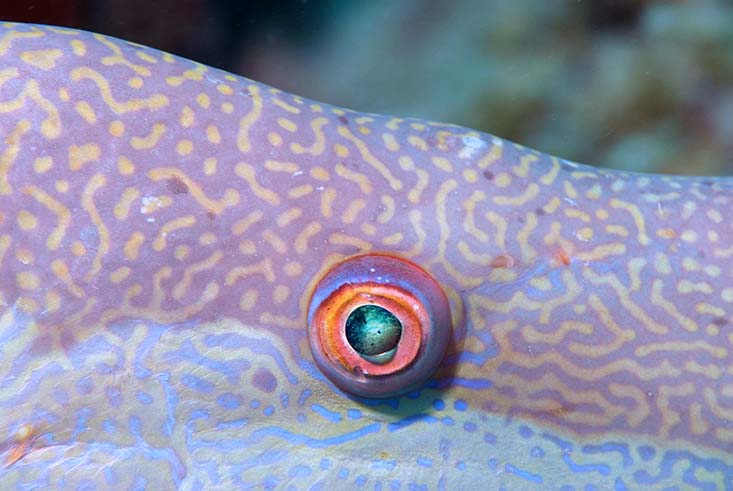 Up close and personal look at a hogfish eye. Photo by Rob Waara.

The hogfish, named for the long hog-like snout it uses to root around in the sand for food, is an iconic Florida Gulf Coast seafood staple known for its delicious white meat. 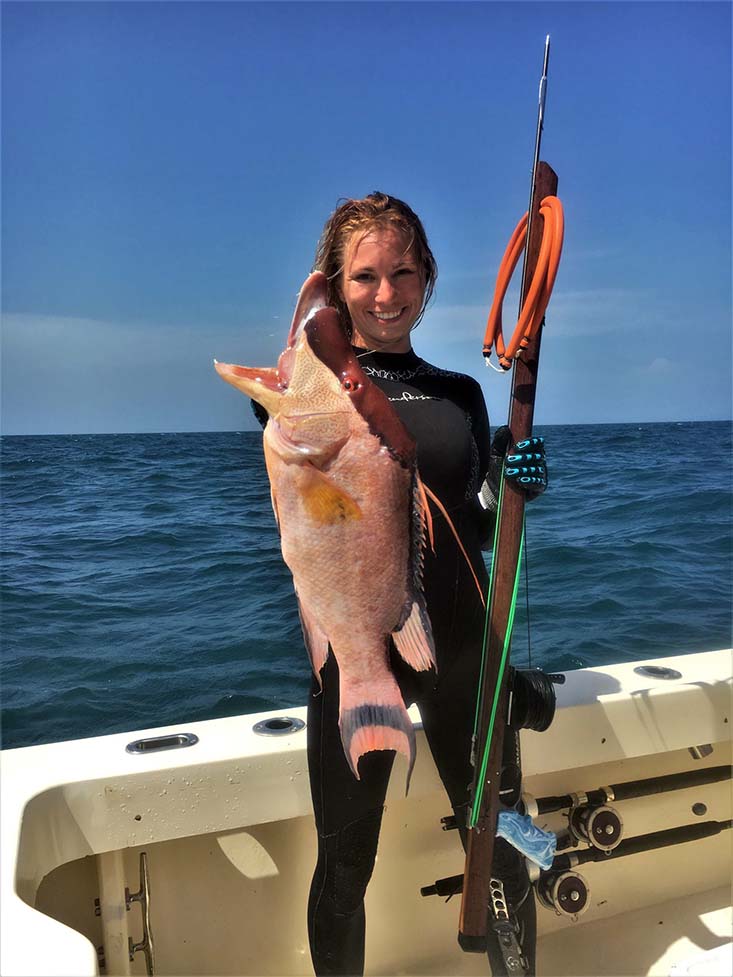 I was able to collect a FEW of my own samples for my thesis. Photo by Grayson Shepard.

I first became interested in hogfish through spearfishing. Having been diving for years along the Gulf coast of Florida, I come across them often and find them beautiful, intriguing, and charismatic. When I encounter a hogfish underwater that I have not selected to eat for dinner that night, I enjoy just watching its dance-like swim side-to-side as it cruises along the reefs, changing color when startled, and digging up plumes of sand in search of a meal.

As an incoming master’s student at the University of South Florida in 2016, I knew I wanted to learn more about this unique and (delicious) fish, but didn’t exactly know how to do it. Thanks to innovative research at the College of Marine Science (CMS), I was able to develop quite the interesting and relevant thesis topic on my favorite fish in the sea, and recently published an article summarizing my findings in Marine Ecology Progress Series.

Unlike other reef-fish species, hogfish catches have been historically dominated by spearfishing gears rather than hook-and-line. It’s not that they won’t bite a hook—in fact, the hook and line catch rates have been steadily increasing in recent years—it just takes a lot more patience. Unlike hook-and-line fishing, there are inherent limitations to how deep spearfishing can take place. 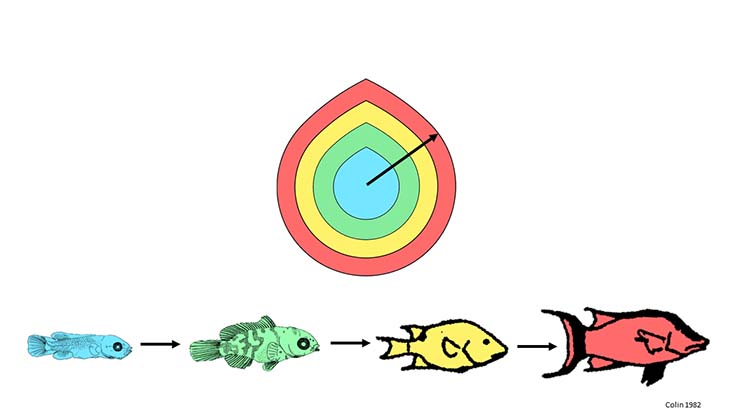 Eye lenses serve as chronological recorders of stable isotopes throughout the life of a fish. Hogfish illustrations from Colin 1982.

Scientists who previously studied hogfish populations in the Gulf of Mexico found that the hogfish caught in deeper, offshore waters were significantly larger than those captured nearshore, even within the same age class. This finding sparked some questions about whether it was driven by hogfish moving further offshore as they grew larger, food availability or competition, or perhaps by size selection by the dominant harvest sector - spearfishers.

To dig into this question, I followed in the footsteps of previous students at CMS who had studied the chemistry of fish eye lenses to understand how fish move, where they came from, and how their diet changed over time—useful information for fisheries management and habitat protection.

Photo of a hogfish eye lens through a dissection microscope.

So, I had the species of interest picked out, questions to answer, along a method for studying them, but I still needed to figure out how to get the samples. Rather than investing significant and costly field time, I reached out to the spearfishing community for help. After all, they knew exactly where to find hogfish of all shapes and sizes. The community’s response was overwhelming. Between spearfishing tournaments and personal outings, divers donated over 200 hogfish carcasses to my research project.

Each fish provided valuable information (especially for age and growth data, that were not used in my thesis, but were integrated into the last hogfish stock assessment), and I selected a subset on which to perform stable isotope analysis to uncover more details about their prior life. The eye lens forms in layers like the rings of a tree, incorporating ambient environmental and dietary information into each layer as they grow. Peeling and analyzing these layers provided a time series of chemical information through the life of each fish that could then be translated into diet shifts or habitat changes. 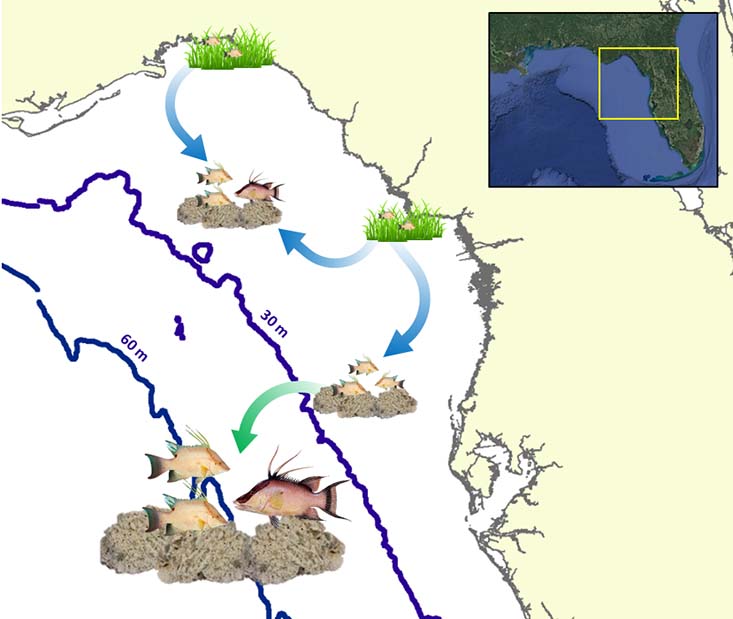 The data revealed significant increases in trophic position (basically their place in the food web) across hogfish lifetimes, as well as a new discovery for hogfish habitat use in the eastern Gulf of Mexico. The hogfish caught in deep, offshore habitats inhabited nearshore reefs as juveniles, while adults in shallow, nearshore habitats likely came from estuaries. This novel finding contradicted prior theories that discussed estuaries as the only juvenile hogfish habitat. There was also evidence for use of specific juvenile habitats, indicating that most of the hogfish sampled came from the Cedar Key region—supporting existing evidence of this area’s importance as reef-fish nursery habitat.

This project certainly taught me a lot about my favorite fish. It also contributed to the knowledge of this iconic species that is an intrinsic part of Florida culture, and it helped connect me to a supportive community of divers and spearfishers throughout the state of Florida. 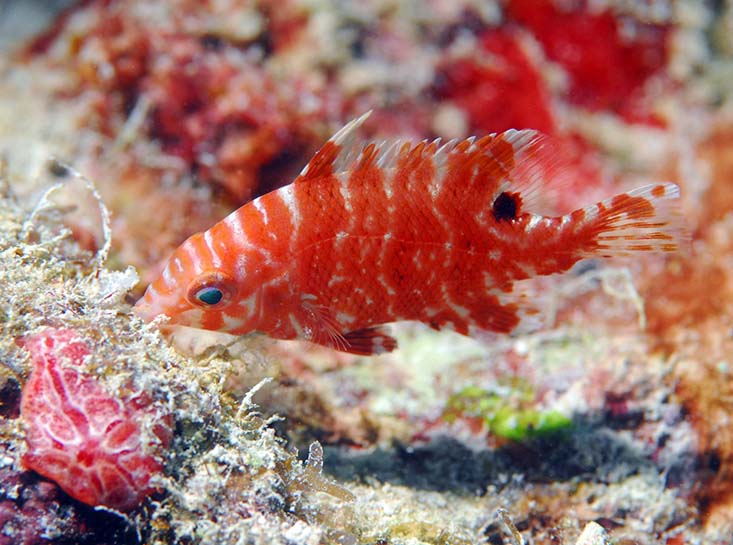 I am grateful for the support I received from endowed fellowships through the University of South Florida CMS funded by the National Marine Fisheries Service and Tampa Bay Parrothead Club, along with additional funding from the Guy Harvey Ocean Foundation, Florida Sea Grant, and the Florida Skin Divers Association. I also thank my coauthor and major professor, Dr. Chris Stallings for his guidance and mentorship, as well as my labmates from the Fish Ecology Lab for all their support.

My advice to new marine science students in search of research questions or field data: ask the folks who are in and on the water every day. Exploring the ocean and its natural resources is an inherent part of Florida’s culture and economy. Get involved with the community to explore their needs and their questions about the natural world and your research could end up being even more valuable and successful than you could ever imagine. 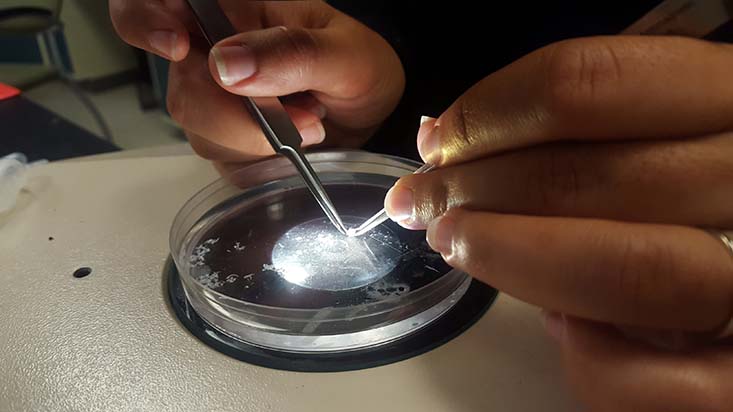 Peeling a hogfish eye lens in a dish of deionized water helps to loosen and separate the layers for collection and analysis.