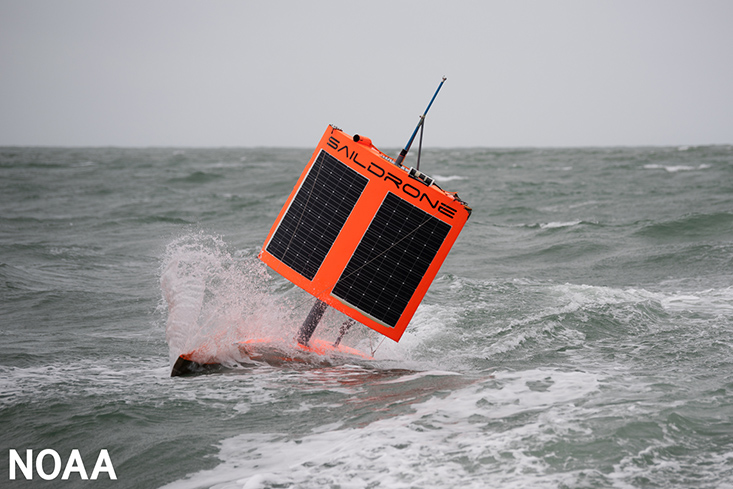 On August 3, 2019, an unmanned Saildrone 1020 completed a 13,670-mile journey around Antarctica in search of carbon dioxide. It was world’s first autonomous circumnavigation of Antarctica. Learn more about Saildrone 1020's journey at https://www.saildrone.com/antarctica. (Saildrone Inc./With permission.)

By: Dr. Nancy Williams, with support from Dr. Don Chambers

In August of 2019, an autonomous Sailing vehicle (ASV) called a Saildrone achieved the first uncrewed circumnavigation of Antarctica.  This orange-red Saildrone, its seven-meter hull equipped with instruments to measure both ocean and atmospheric properties, was launched and retrieved from Bluff, New Zealand. It took nearly seven months to achieve its goal. The drone survived a collision with an iceberg and numerous intense Antarctic winter storms, proving itself as a platform fit for high-latitude observing. It certainly piqued my interest because I study the Southern Ocean around Antarctica.

Despite its remoteness, the Southern Ocean plays a key role in the climate system, accounting for about half of the ocean’s drawdown of anthropogenic carbon from the atmosphere; this is the carbon released by humans through fossil fuel burning, cement production, and land use changes. Quantifying when, where, and how much excess carbon the ocean takes up is critical to understanding how the Earth’s climate will respond to our ever-increasing carbon emissions.

Typically, observations of ocean carbon fluxes are made from research ships. So-called “underway systems” suck water from the ocean’s surface while the ship is moving and measure both ocean and atmospheric carbon dioxide (CO2) content, allowing scientists to calculate a difference. Based on the CO2 concentration difference, and some information about wind speed and ocean temperature, scientists can calculate whether the ocean is absorbing or releasing CO2 at that time and place. A significant limitation to this approach is that a research vessel may only sample an area once every few years, primarily only in summer months, and will move through a particular area relatively fast.

Enter the Saildrone. Equipped with the ASVCO2 system designed by the National Oceanic and Atmospheric Administration’s Pacific Marine Environmental Laboratory, the Saildrone utilizes a similar system for CO2 concentration differences but because it is autonomous, it can measure more places in the Southern Ocean, do so any time of the year, and be programmed to stay in a particular area for a longer period of time to take repeat measurements.

I noticed something interesting in the data from the 2019 Antarctic Circumnavigation: that the ocean carbon content (and therefore “outgassing” of CO2) was higher near ocean eddies. 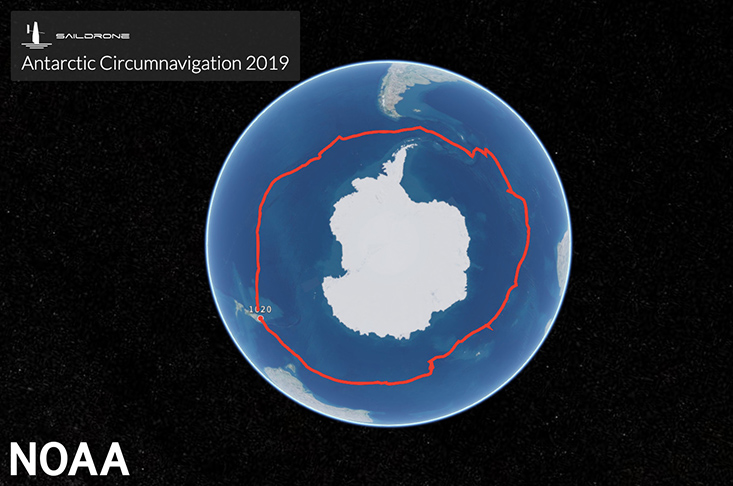 On August 3, 2019, an unmanned Saildrone 1020 completed a 13,670-mile journey around Antarctica in search of carbon dioxide. It was world’s first autonomous circumnavigation of Antarctica. Learn more about Saildrone 1020's journey at https://www.saildrone.com/antarctica. (Saildrone Inc./With permission.)

Ocean eddies are large, energetic, circular swirls in the ocean, ranging in diameter from about 10 to 100 kilometers. These long-lived oceanic cyclones can rotate either clockwise or counterclockwise; this motion will mix water both horizontally and vertically between the ocean surface and the deep. They can also trap and carry water inside their walls for up to a year or longer and move over substantial distances in that time. Importantly, because eddies also lead to either a depression or a doming in the sea surface height, we can observe these eddies from space.

I reached out to Dr. Don Chambers, Professor of Physical Oceanography at USF CMS and an expert in observing sea surface height from satellites, to discuss these findings. We wondered: could we use Saildrones to understand how a few representative eddies are affecting ocean carbon content? Could we use quasi-daily satellite observations to “scale up” those very sparse ocean carbon observations and get a better estimate of the broader Southern Ocean carbon fluxes?

After examining the 2019 data and considering the number of eddies present in the Southern Ocean at any one time (of the order of several hundred), we estimated the contribution could be significantly larger than previously estimated. That realization prompted us to write a proposal to the National Science Foundation. We got to work in summer of 2020, just as the COVID-19 pandemic really set in. At the time, we didn’t know what the future would look like, but we knew that this autonomous drone- and satellite-based mission was COVID-proof, requiring no personnel travel or research ship time -- and that could only be a good thing.

The National Science Foundation Office of Polar Programs agreed, and the proposal, which I led in collaboration with Chambers, and Dr. Eric Lindstrom, Chief Scientist at SAILDRONE, Inc., was recently funded to send two Saildrones back to the Southern Ocean in Austral winter (July-September) 2022 to target ocean eddies.  This $1.1M project is my first lead proposal and the first time NSF has funded research using Saildrones instead of research ships.