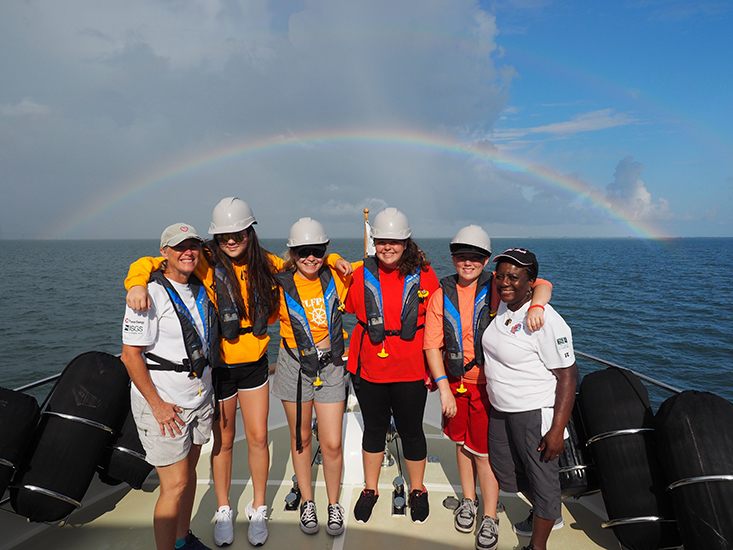 READ THE ARTICLE IN USF MAGAZINE

The USF College of Marine Science launched its first Oceanography Camp for Girls (OCG) in 1991. That was the year digital cell phone technology was launched, although most people still had phones attached to walls – and the year “the web” became publicly available, although few knew what that really meant.

Oh my, how the world has changed since 1991. But the OCG has stood the test of time.

This three-week summer program, designed for young women from Pinellas County in their sandwich summer between middle school and high school, has earned billing by the National Science Foundation (NSF) as a model for immersive, experiential STEM learning for women and girls. Activities include a spectrum of hands-on field trips, guided laboratory experiments, interviews with scientists, communications training, and more.

Studies suggest middle school is the time young women start to lose interest in science, and 30 years of OCG survey data suggest that campers leave the experience with a much better appreciation for, and understanding of, what it means to do ocean science. 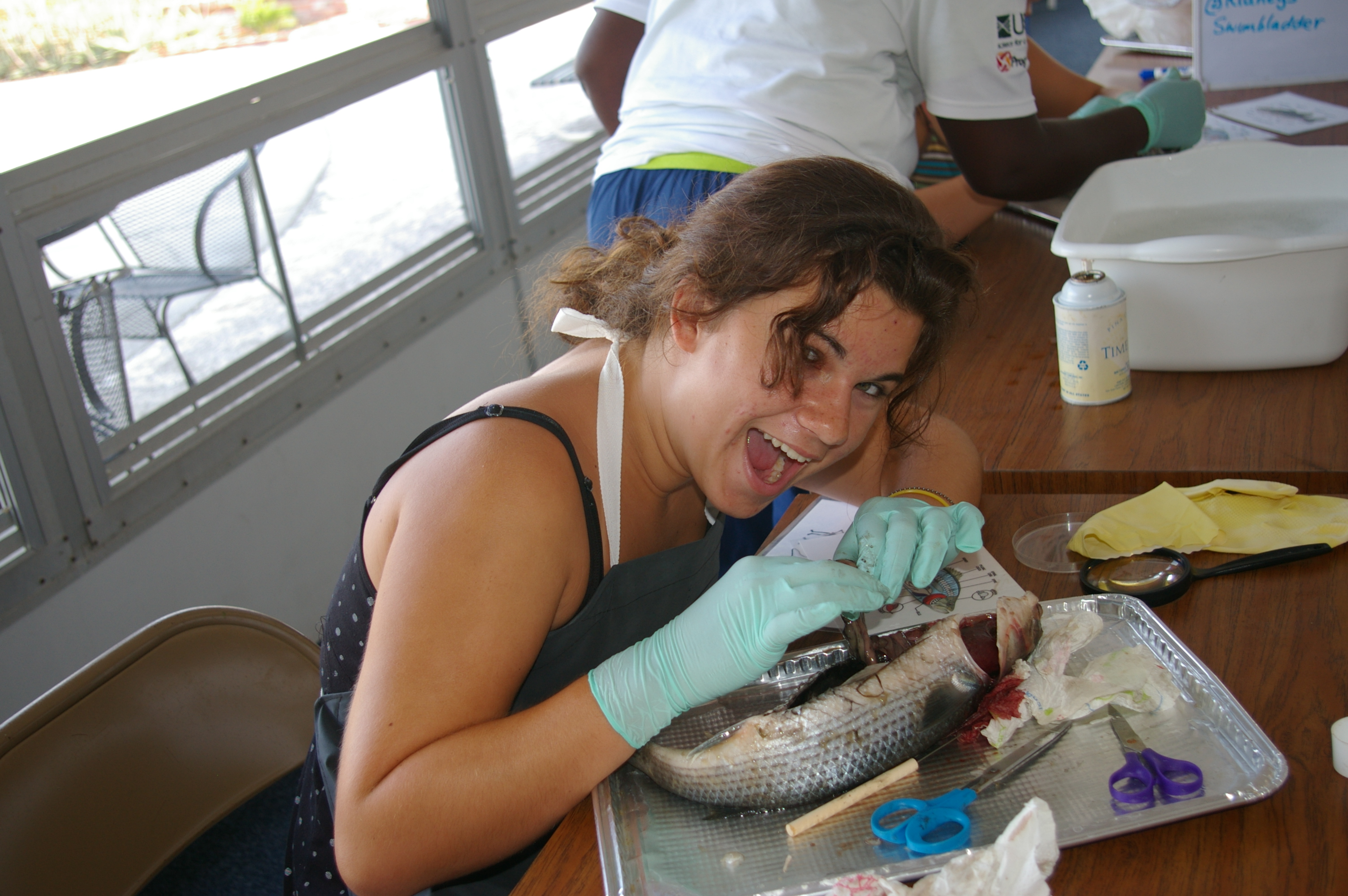 Makenzie Kerr, now 26, attended OCG in 2009, went on to earn her master’s degree in marine science at USF, and now works there.

“They learn, like I did, that being a marine scientist is about a lot more than training dolphins,” said Makenzie Kerr, 26, who attended Camp in 2009.

Kerr is a prime example of the camp working as a feeder into USF and the St. Petersburg-based STEM workforce. She earned a bachelor’s degree in biology and a master’s degree in marine science, both on the USF St. Petersburg campus. Today she works as the lab manager and outreach coordinator in a marine genomics lab at the USF College of Marine Science. Having come full circle, Kerr also works 10 hours a week for the OCG.

She vividly recalls, with an energetic enthusiasm she still carries today, the first time she observed seawater under the microscope as a camper.

“The plankton looked like mini aliens swirling around,” she said.

Dr. Jessica Cross, 34, OCG alum from the year 2000, is a chemical oceanographer who works for the NOAA Marine Environmental Laboratory in Seattle. She studies climate change in Alaska.

“In rural Alaska especially, many people live off the land and climate change is a lived experience for everyone,” she said. “It’s really about life and death decisions here.” 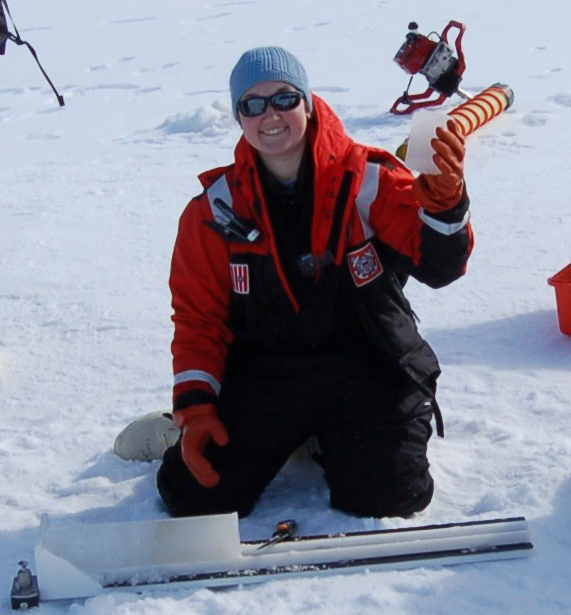 Cross credits her natural tenacity and her OCG experience with launching her career in ocean science – so much so that she brings her OCG tee shirt, now 21 years old, with her as a good luck charm on every research expedition. Given that she’s spent 413 days at sea so far, the shirt has seen more of the world’s ocean than most people ever will.

“The holes give it character,” said Cross, who describes herself as an average student at best—one who certainly had an enthusiasm for science but never a natural aptitude for it.

“OCG humanizes what scientists do,” she said. “I realized I didn’t have to be like Jacques Cousteau to work in marine science. There was so much more to it, and this huge spectrum of people contributing. OCG helped me envision that I, too, really could be a scientist.”

So much more than STEM

While the Camp’s stated mission is “to inspire and motivate young women entering high school to consider career opportunities in the sciences,” describing the OCG as a STEM program is a bit like describing a Tampa Bay sunset or a Dali painting as “nice.”

“Camp literally changed my life,” said Dr. Rachel McCaffrey, 34, who attended Camp in 2001. A breast surgeon who helps cancer patients in Michigan, McCaffrey recently accepted a position at Vanderbilt University where she’ll work full-time as a surgeon and teach on the side. 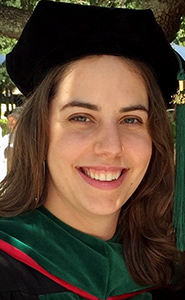 Dr. Rachel McCaffrey, 34, attended Camp in 2001 and said it changed her life. She is now a breast surgeon who helps cancer patients in Michigan.

“My passion for teaching stems directly from the OCG,” she said. McCaffrey speaks with a kind of surgical precision – not effusive, pretty darn to-the-point – except when speaking about Camp.

“There’s a magic to Camp that I can’t fully understand,” she said. “Yes, it teaches you about what it really means to do science but it also helps girls, at the perfect age where it really matters, to develop self-confidence, to build courage, and to learn that failing is OK – all in this safe and protected environment. It happens over the course of all these micro-moments and opportunities you get throughout the experience, and the lessons learned can stick with you for life.”

Studies show that self-confidence plays a significant role in a young women’s career choices—something that can start as early as age 12, said Dr. Teresa Greely, who has served as the Camp’s director since 1994. She earned her master’s in marine science and doctoral degree in science education, both at USF.

Their perception of failure is devastating, Greely said. “Realizing that failure is not only OK but often critical to moving science forward is a big deal in Camp,” she said.

Key to OCG’s longevity is the endowment Betzer established, valued today at more than $1     million, which would support it in perpetuity.  Additional supporters have included private               foundations, families, and donors; Duke Energy Foundation; NSF; the National Oceanic and Atmospheric Administration (NOAA); Office of Naval Research (ONR); and the United States Geological Survey (USGS). 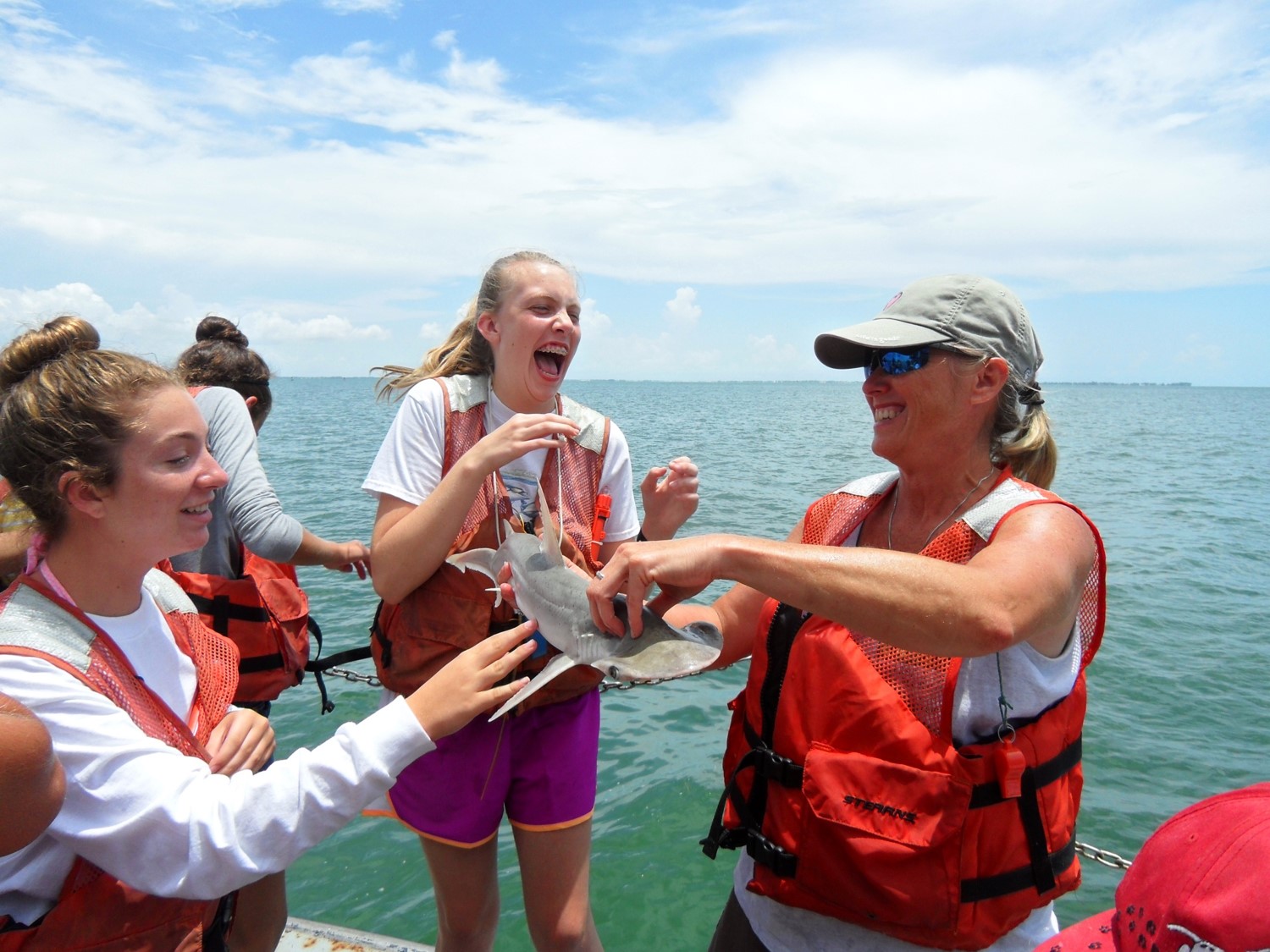 "Over my 37-year career in marine science, one of my proudest and most significant legacies is the critical part I played in starting the OCG and then singlehandedly building an endowment to support it in perpetuity,” said Betzer. “Through the years countless parents of our OCG alums have shared so many inspiring stories about the transformative experiences their young daughters had – and it’s thrilling to hear them every time."

OCG is offered at no charge every year to 30 young women inclusive of all backgrounds, literacy and aptitude levels – culturally, socially, economically, and otherwise. More than 1200 girls have participated since the Camp’s inception. (If you do the math, 30 a year over 30 years is 900 Campers but there were many years during which more than one Camp was offered.)

“While our mission has remained consistent, our delivery of that mission has definitely evolved,” said Greely.

In the early “toddler” years, as she calls them, the camp mentors and educators were scientists, mostly marine science grad students and some faculty, doing what they do – distilling marine science concepts the best they could for their teenaged audience.

“We realized pretty quickly that we didn’t have all the tools we needed,” Greely said. Missing, big time, she said, were the cultural and social aspects of teaching that were critical to creating meaningful experiences for teenaged girls. 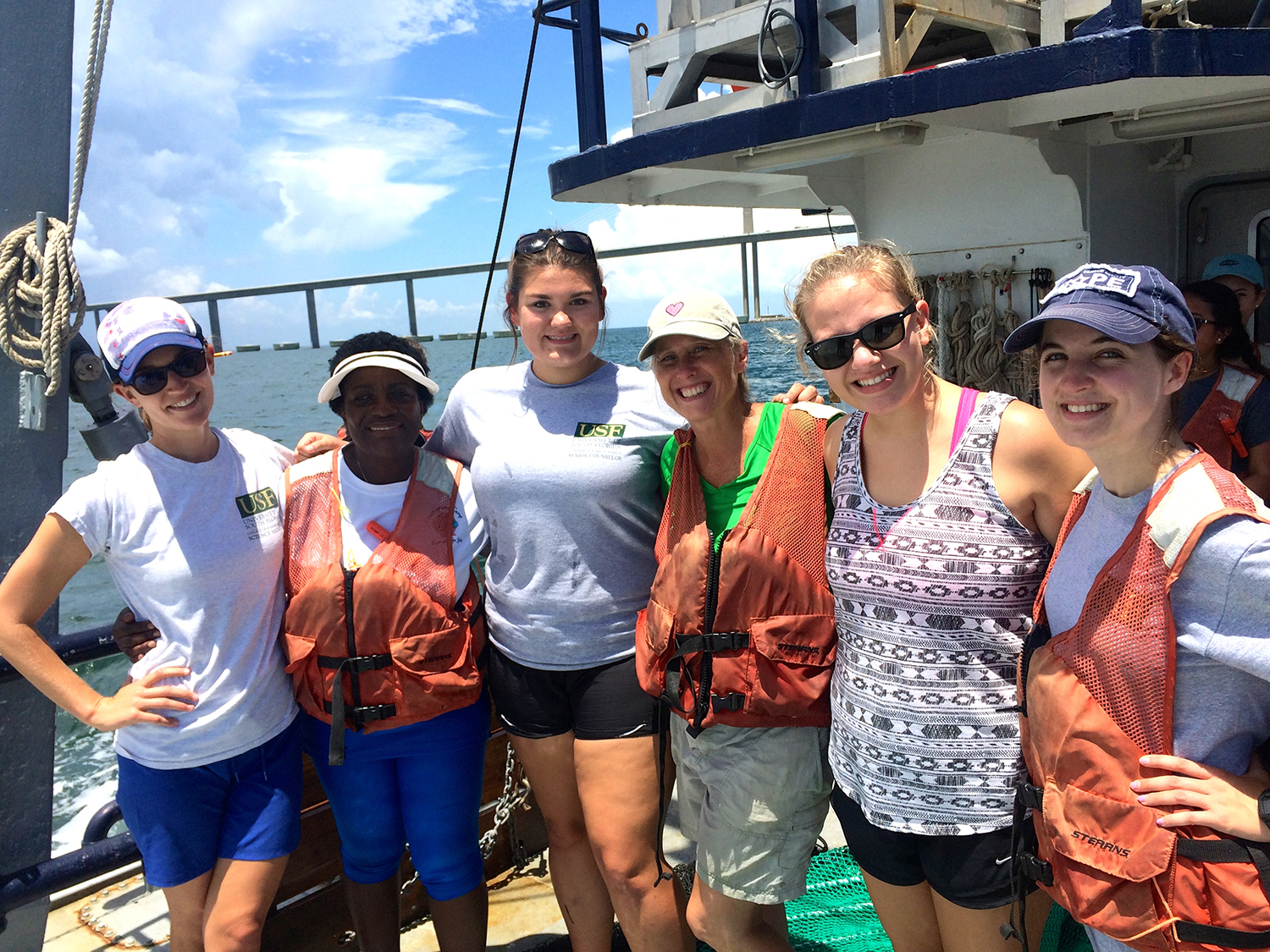 That’s where Dr. Angela Lodge, a former social worker and youth development expert came in, Greely said. She co-directed OCG for more than 20 years and worked with Greely to institute an intensive three-week training experience for all graduate student science mentors -- the same amount of time as the entire Camp experience.

“We essentially doubled the impact of the Camp,” Greely said. “It’s not just about teaching the science, and that’s when our program really became a force to be reckoned with.”

Topping the training list: safety, positive asset-building, cultural sensitivity, and building productive interactions amongst diverse groups. In addition, they embedded the Camp curriculum with exercises focused on team building, communications skills, building trust and relationships – skills that are essential in science, and also in life. 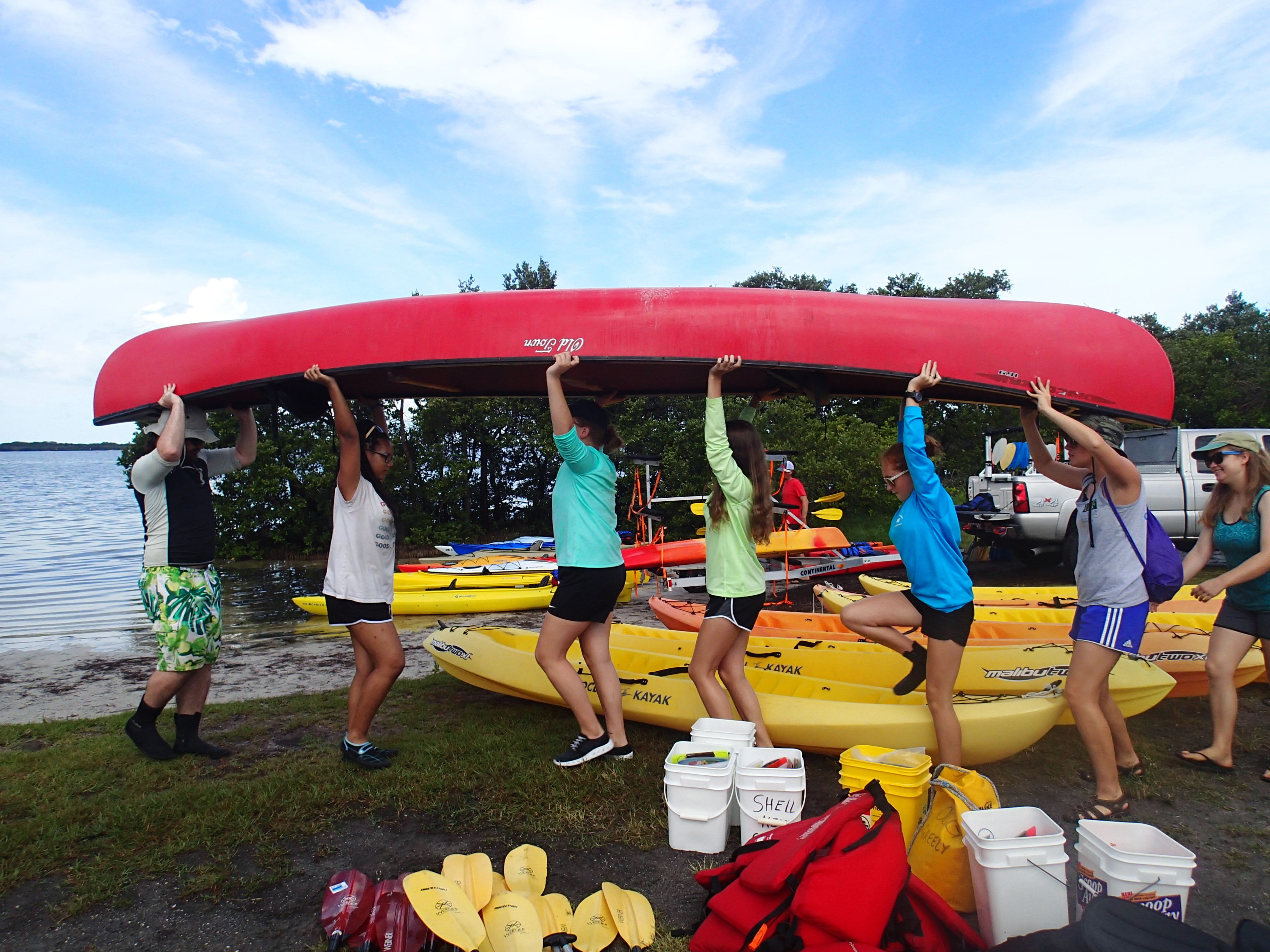 For example, if you put someone down, you have to give that person two “put ups,” Greely said. That same rule applies to mentors and Campers alike.

“When you provide opportunities to stretch boundaries with positive ‘can do’ attitudes and accountability, amazing things can happen,” said Greely. She recalls several instances where they accepted, and continue to accept, girls who are considered at-risk.

“My two passions are for people and for the ocean,” said Greely. “Like the campers, this Camp has developed my positive assets, and it’s been one of my life’s privileges to be a part of it.”

OCG motto: “Encouraging a positive sense of self, science, and the environment through ocean exploration.”

“Abigail felt each OCG camper was allowed to be themselves while learning how to be a respectful, young lady who will now be environmentally aware and contribute positively to our world.  Plus, Abigail was able to … participate in activities she may not experience in high school classrooms (like working with sophisticated scientific equipment).” --Terry and Laurie Grantges, Parents of an OCG Camper in 2013

A Sneak Peak of the OCG schedule

Each day begins with a group circle, an ‘ice breaker’ and a quote of the day, and ends with a reflection.