Red Snapper in the Gulf Show Signs of Stress 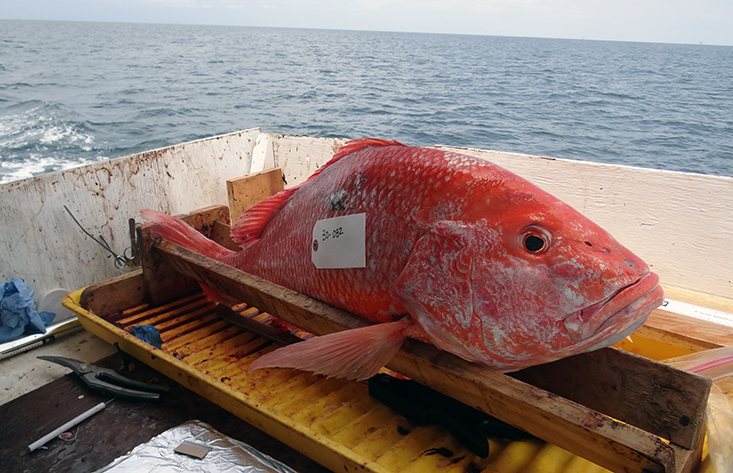 One of the red snapper sampled as part of this Gulf-wide study in the wake of the Deepwater Horizon oil spill.

Nearly 100 percent of the red snapper sampled in the Gulf of Mexico over a six-year period by University of South Florida (USF) marine scientists showed evidence of liver damage, according to a study reported in Aquatic Toxicology.

The study is the first to correlate the concentration of crude oil found in the workhorses of the digestive system -- the liver, gall bladder, and bile – with microscopic indicators of disease, such as inflammation, degenerative lesions, and the presence of parasites. The team sampled nearly 570 fish from 72 Gulf locations between 2011 to 2017 in the wake of the historic 2010 Deepwater Horizon oil spill. 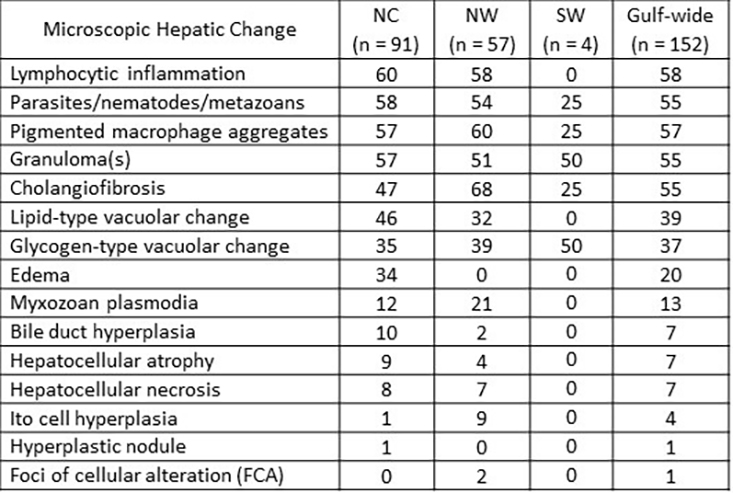 This table outlines the prevalence (%) of physical microscopic signs of liver damage, such as inflammation, observed in the red snapper collected from different regions of the Gulf of Mexico (North Central or NC, Northwest or NW, Southwest or SW, and Gulf-wide).

“The results add to the list of other species we’ve analyzed indicating early warning signs of a compromised ecosystem,” said Erin Pulster, PhD, first author of the study and researcher at the USF College of Marine Science.

Pulster and the team of researchers studying oil pollution in Gulf of Mexico fishes have previously reported high levels of oil exposure in yellowfin tuna, golden tilefish, and red drum as well.

The Gulf of Mexico not only experiences hundreds of annual oil spills with long-lasting effects such as the historic Deepwater Horizon spill in 2010 but is routinely subject to intense shipping traffic and collects pollutants from faraway places that flow in from coastlines and rivers like the Mighty Mississippi and the Rio Grande.

Honing in on the toxic hot spots

In this study Pulster and the team looked specifically at the most toxic component of crude oil called polycyclic aromatic compounds, or PAHs. PAH sources include old oil and gas rigs, fuel from boats and airplanes, and natural oil seeps, which are fractures on the seafloor that can add millions of barrels of oil to the Gulf every year. 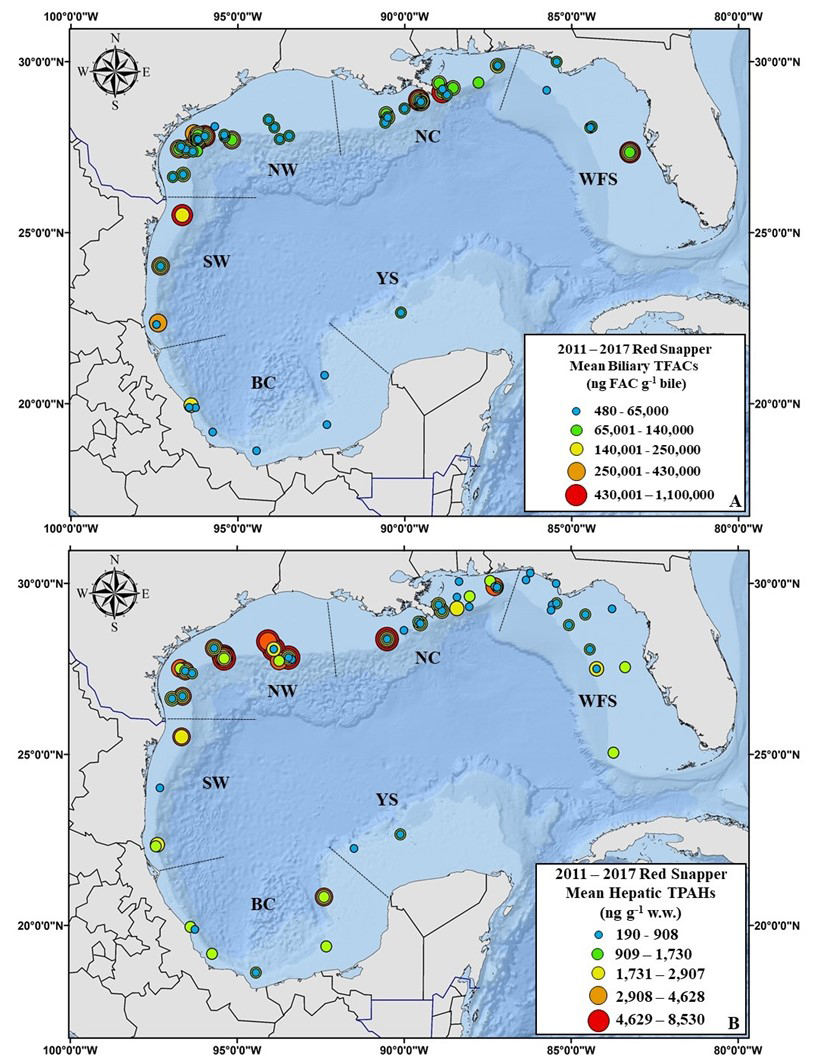 Mean concentrations of polycyclic aromatic hydrocarbons (PAHs, which are labeled here as total fluorescent aromatic compounds) in the bile (biliary, top map) and the liver (hepatic, bottom map) in the red snapper study that took place 2011-2017.

The presence of PAHs in the bile, which is produced by the liver to aid in digestion, indicates relatively recent oil exposure (days to weeks). The team found that the PAH concentration in the bile declined and remained relatively stable after 2011 but they noted a sharp increase in 2017.

Overall, the bile PAH “hot spots” were on the West Florida Shelf (WFS) and in the vicinity of the Deepwater Horizon spill, off the mouth of the Mississippi River. This is the site of the 2004 Taylor oil platform collapse off Louisiana, the longest oil spill in history, which continues to leak oil today. The hotspot west of Tampa on the WFS could be due to shipping traffic or submarine groundwater discharge, Pulster said.

PAH found in the liver indicates the fish has been chronically exposed to oil (months to years). The team found the liver PAH “hot spots” in the northwest Gulf of Mexico, where a considerable number inactive oil and gas platforms exist.

While the PAH concentrations in the liver remained relatively stable throughout the study, indicating that the red snapper are physically managing the oil exposure, there is a tipping point, Pulster said. Red snapper can live upwards of 40 years but fish manage oil toxins, similar to the way humans manage exposure to greasy burgers and alcohol.

Repeated exposure to oil in fish can lead to cancer and eventually to death, but it can also result in sublethal impacts. Virtually all (99 percent) of the red snapper sampled had an average of five physical signs of liver damage. The observed changes can result from natural causes but are also well documented secondary responses to stress which, could potentially signal disease progression.

“We just don’t know when we will tip the scale,” said Pulster.  There was literally one red snapper in the bunch with PAHs but no physical signs of damage when viewed under the microscope, said Pulster.

The PAH concentrations detected in the livers of Red Snapper can be several orders of magnitude higher than what scientists find in the edible muscle tissue that humans eat. Red snapper remain safe to eat but Pulster stressed the need for continued monitoring. Only then can scientists keep their finger on the pulse of fish health and know what the impacts of additional oil spills may be – especially in species like snapper that are so critical to the Gulf economy, she said. 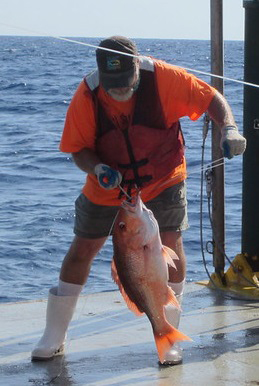 The senior author, Steve Murawski, PhD, retrieves a red snapper whose liver and bile were analyzed as part of the study.

“This is a unique study. Most investigations of oil spill effects only last a year or two, and this study gives us both a wide scale of reference across the Gulf and also long-term monitoring, which we lacked prior to Deepwater Horizon,” said Steve Murawski, PhD, senior author on the study. Murawski, a professor and the St. Petersburg Downtown Partnership Peter R. Betzer Endowed Chair at the USF College of Marine Science, led the 10-year research effort in response to the Deepwater Horizon oil spill.

“There is a story we can tease out of the data,” Murawski said. “The observed decline in oil exposure in red snapper in the few years following the Deepwater Horizon accident suggests the high levels measured in earlier years were a direct impact from the spill.  Its legacy continues, and we’d be wise to continue the critical research ironically made possible by long-term monitoring post-disaster.”

The study was supported by The Gulf of Mexico Research Initiative, and The Center for the Integrated Modeling and Analysis of the Gulf Ecosystem (C-IMAGE I, II, and II).