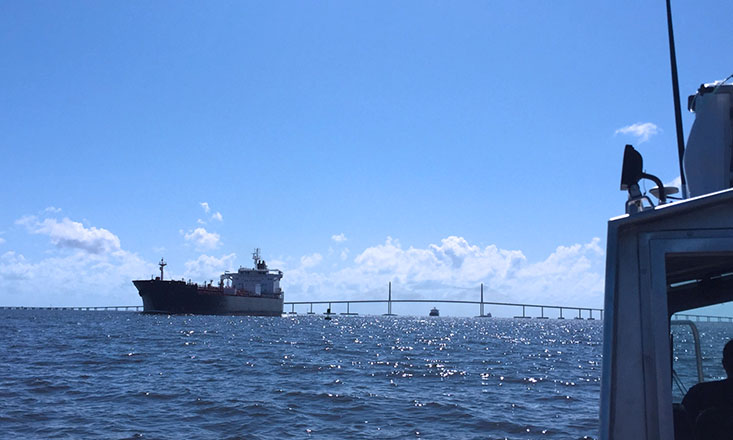 View of the first fuel ship entering the Port of Tampa after Hurricane Irma, as it passes NRT 5. Credit: NOAA

Harbor pilots entering the mouth of Tampa Bay from the Gulf of Mexico may feel the energy of the ‘home stretch’ when they see the iconic Sunshine Skyway Bridge, but they are wise not to let their guard down. The journey to a berth at Port Tampa Bay, the largest port in the state of Florida, is still another four hours and 45 miles away, down a narrow channel with ample zigs and zags.

Thankfully they have the Tampa Bay Physical Oceanographic Real-Time System (TB-PORTS) literally by their side 24/7/365.

PORTS, a “coastal intelligence” system of oceanographic and meteorological sensors, is freely available to all. This year marks its 30th birthday, and those behind its development and operation have a lot to celebrate. Since PORTS became fully operational in September 1991, the number of ship groundings in Tampa Bay has decreased by two-thirds. It has made the final leg of the journey to port facilities around Tampa Bay significantly safer for the 3,000 barges, cruise lines, tugs, and cargo vessels that make the trip every year.

“PORTS tells the harbor pilots all they need to know about the wind, current, and tide conditions so they can make their transit as safely as possible,” said Dr. Mark Luther, a physical oceanographer at the USF College of Marine Science who has served as director of operations since 1995.

According to the latest figures from the Bureau of Transportation Statistics, Port Tampa (above, Map Credit: NOAA; the map is marked to show the main shipping channel) is ranked #22 in the US out of the top 50 based on the total tonnage of trade processed at its facilities in 2019 (Global Trade magazine, July-August 2021 issue, see http://epagepub.com/publication/?m=22029&i=717314&p=18&ver=html5).

NOAA manages PORTS®, and local operations and maintenance of the system have been directed by the Greater Tampa Bay Marine Advisory Council - PORTS, Inc., a non-profit consortium of maritime interests, through cooperative agreements with the NOAA National Ocean Service Center for Operational Products and Services and the USF Center for Maritime and Port Studies at the College of Marine Science (led by Luther).

This real-time information is especially important for larger vessels with lower clearance margins, Luther said. More than four billion gallons of oil, fertilizer components and other hazardous materials pass through Tampa Bay each year. If the tide is higher upon entry to Tampa Bay, ships can handle more cargo and therefore increase the profitability of the transit.

“PORTS is a great example of the kinds of digital eyes and ears we need in the global ocean basins so that we can maximize the safety and health of our waterways and monitor them in real time from anywhere on the planet,” said Dr. Tom Frazer, Dean of the USF College of Marine Science.

The first of its kind, born from tragedy

Tampa Bay PORTS® was a prototype system that was implemented more than a decade after a harrowing accident occurred on the Sunshine Skyway bridge. On the morning of May 9, 1980, an intense squall line whipped up 60-knot winds. A bulk carrier, the M/V Summit Venture, was blinded by the storm and struck the southbound part of the bridge, causing a section of it to collapse. A greyhound bus and several cars ended up in the water--killing 35 people.

In the wake of the disaster, the local maritime community -- led by the Tampa Bay Pilots Association and the Tampa Port Authority -- petitioned the US Congress for funding to NOAA to improve monitoring capabilities in the bay. Nearly a decade later, the Tampa Bay Oceanography Project (TOP) began in 1990 as part of NOAA’s Coastal Ocean Circulation Program (COCP). This included a 15-month study of currents, water levels, water temperatures, salinity, winds, and other meteorological/oceanographic parameters, said Luther. By the end of the project, TOP had collected the largest number of circulation measurements in one estuary in the 100-year history of COCP.

Within three years of Tampa Bay PORTS® becoming operational, San Francisco Bay and Houston/Galveston Bay implemented their own PORTS® networks. Today PORTS® operates 24 hours a day/7 days a week in 37 locations around the coasts and Great Lakes of the United States.

TB-PORTS continues to expand: the original 12 oceanographic and meteorological sensors at 8 sites have been increased to 35 individual sensors at 15 locations, including additional Acoustic Doppler Current Profilers (ADCPs) at the turn approaching the Port Manatee channel and in Egmont Channel, additional wind sites around the Port of Tampa to support cruise ship transits, two atmospheric visibility (fog) sensors, a directional wave buoy (operated in collaboration with the Coastal Data Information Program - http://cdip.ucsd.edu/ - and the US Army Corps of Engineers), and a new Air Gap sensor on the Sunshine Skyway Bridge center span measuring instantaneous vertical clearance.

Dr. Mark Luther covers: 1. PORTS: The Beginning, 2. The Power of PORTS in Tampa Bay, and 3. How PORTS-Tampa Bay has Evolved. Credit: USF College of Marine Science

Today Tampa Bay PORTS® is funded by a variety of sources, including Hillsborough County (through the Phosphate Severance Tax Trust, with Mosaic as the primary contributor), Port Tampa Bay, the Tampa Bay Pilots Association, and Port Manatee.

“Ours is also the only PORTS system that is intimately connected to an academic research institution,” said Luther. Not only has PORTS® data streams saved lives; it has been the centerpiece of nine master’s theses and PhD dissertations at USF, 34 refereed publications, and nearly 90 local, regional, and national presentations. It has also played a key role in nearly 20 grants and contracts worth about $4.3 million.

Not bad for a system that costs about $200,000 annually to maintain. 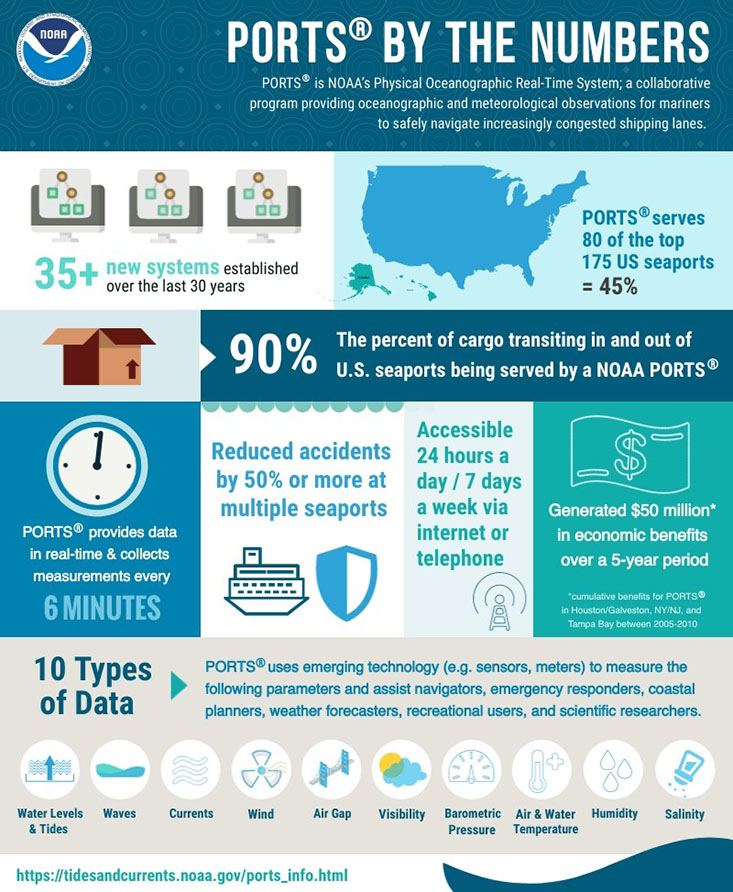