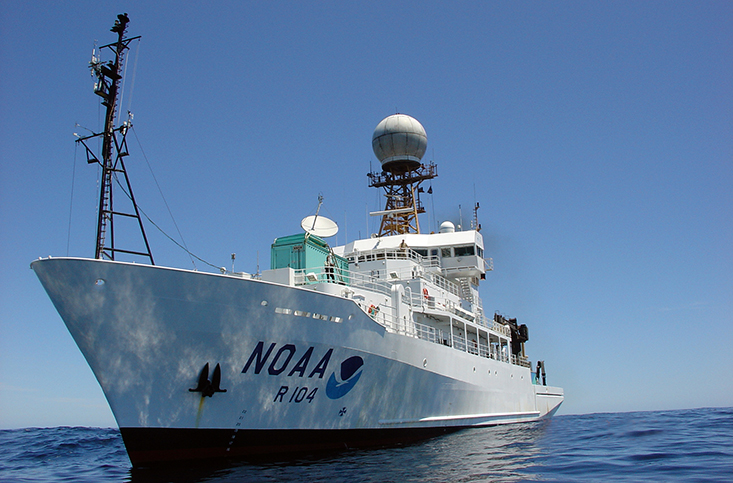 NOAA’s R/V Ronald H. Brown will carry the Byrne crew, as well as 26 other scientists, for the West Coast Acidification 2021 cruise. Photo: NOAA.

The NOAA West Coast Ocean Acidification (WCOA) cruise is part of a decades-long program that monitors chemical parameters all along the west coast of the United States, from Canada to Mexico. The major goal is to understand trends in the Pacific Ocean, with a specific focus on environmental parameters that influence ocean acidification – a major threat to ocean health, food security, economies, and more. The cruise departs for another trek this summer, along with three CMS students on board. Macarena Martín Mayor, Katelyn Schockman, and Kalla Fleger from Bob Byrnes’ lab study chemical oceanography and will be joining the action aboard the R/V Ronald H. Brown.

The team will sample the same 145 stations that have been sampled for decades. Of the 26 scientists on the cruise representing labs from all across the world, each group is tasked with a specific parameter to measure. These range from total alkalinity to inorganic carbon to nutrients. Like a puzzle, each group will piece together their specialty to create a broader picture of the chemical conditions in the Pacific Ocean.

The cohort from the Byrne’s lab will measure carbonate, a Byrne lab specialty, and then pH at different temperatures. As Schockman explains, “The standard is to measure pH at 25° Celsius. We then use calculations to determine what the pH actually is at in-situ ocean conditions.”

The WCOA cruise is a long one: 45 days, from June 13-July 30, to cover 145 stations. It will be the first long-term cruise for Martín Mayor and Fleger, who said they are excited about the experience.

It’s not a first for Schockman.

“Being on a long cruise with scientists from all over the world is unlike anything else. Everyone on the ship will be focused on some aspect of ocean acidification research, and everyone’s goal is to get good data,” said Schockman. “Everyone is literally eating and breathing science and trying to connect trends in the data. You just geek out on science for a month and a half!”

The cruise is critical to understanding the factors that influence ocean acidification -- and the open source data collected to date have been used to understand important trends in the Pacific Ocean.

Stay tuned as we receive updates from the crew throughout their journey – as internet permits!

The West Coast Acidification Cruise 2021; an awe-inspiring and unique experience!

The WCOA crew members of the Byrne lab, Katelyn Schockman, Kalla Fleger and I returned from a 45-day Pacific coast journey on the R/V Ronald H. Brown with 140 CTDs deployed and over 3,500 samples analyzed. This impressive number does not come easily, as the crew and I were pulling 16 hour shifts on the 24 hour a day research operation to accomplish the huge task of collecting ocean acidification data along the entire West coast.

As you can imagine, some days were easier to stay motivated than others, but we found support in each other. I won a water gun at Bingo and would shoot water at all the people that were being negative. I was called the positivity police!

My favorite memory was when we got to the Santa Barbara Basin. It was the first sunny day in about 20 days, the methane made the water bubble and people were excited about anoxic waters. We still had over a week left but the mood changed completely.

I learned a lot about the work I will be doing, and I am very grateful that I met lots of fantastic people in the seawater carbonate chemistry world. We met accomplished scientists from different institutions, including the NOAA chief scientists for the cruise, Dr. Richard Feely, Dr. Dana Greeley, and Dr. Brendan Carter, who shared their expertise with the crew.

Katelyn taught me so much of what I need to know for my future as a PhD student at CMS that after this cruise I feel more prepared. Due to COVID, I was not able to go into lab last year, but this experience helped me bond with some of my lab mates.

Overall, it was an opportunity to be in a setting where you are living and breathing science 24/7 which was hands down my favorite part. It was an awesome experience!

Below are some pictures I took along the way of the ship R/V Ronald H. Brown, present and alumnus of the Byrne lab, and the entire WCOA crew.