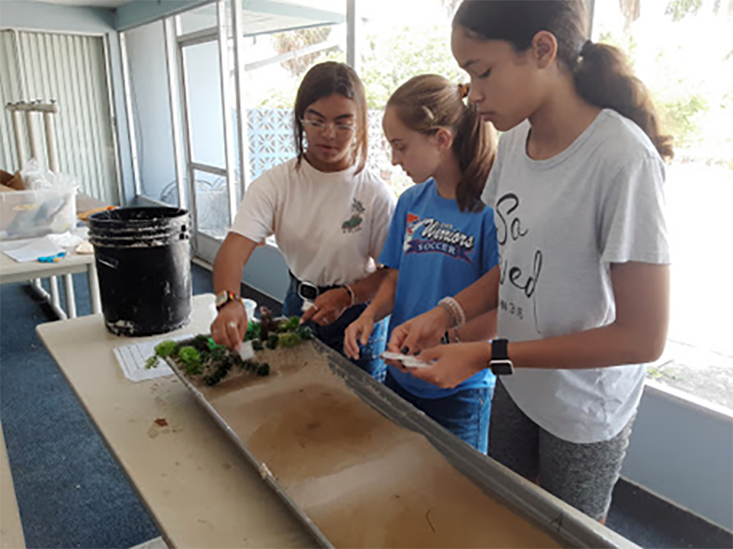 A group of campers at the beach station working together to label the parts of their model of a natural beach. They are labeling the Primary and Secondary dunes which are held together by plants and separate the beach from the mainland.

Even after hurricane Elsa led to camp being canceled for two days, our campers came back with full enthusiasm, ready to learn! Today we were at Clam Bayou learning about the different zones that make up our oceans: beaches, estuaries, and the epipelagic, mesopelagic, and bathypelagic zones. 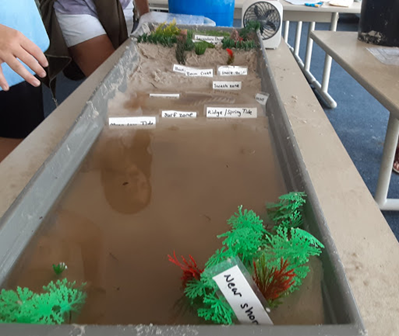 Here is one of the fully labeled beach models! Who knew our beaches had so many complex parts to them?

While learning about our beaches and the different ways that human interaction affects them, campers got their hands dirty creating model beaches, first in their image of what a beach looks like and then making a natural beach, which is a beach that has not had sand added to it or moved by humans. At this station we also talked about how longshore tides move sand and how buildings on the beach interact with it, leading to erosion and sand loss on the beach. Our campers learned a lot at the many different stations and we are proud of them for the hard work they put into the many activities we had!

One of the most memorable parts of camp today was the energizer activity after lunch. The campers split into groups and came up with a song to sing in front of everyone. Some camp favorite performances included the Phineas and Ferb theme song and the ABC’s. Then the peer counselors and mentors decided to have a singing battle, which the campers judged. While the battle ended ultimately in a tie, everyone had a lot of fun, and we can’t wait to see what the next two weeks of camp bring us!