Assets for media use, including b-roll and photos of ‘uncrewed’ vessel & mission control lab; infographic; survey area map; drone footage; and other assets are available here.

This week, University of South Florida marine scientists launched their first field mission in Tampa Bay and the Gulf of Mexico to test a new approach to mapping shallow coastal areas -- the most vulnerable to coastal changes and storm events, but the hardest to survey.

“Coastal areas may be the easiest to get to, but they are the hardest to survey from large ships that have depth limitations and may be less nimble than smaller craft,” said Steve Murawski, who heads the Center for Ocean Mapping and Innovative Technologies (COMIT) at the USF College of Marine Science (USF CMS) that is leading the mission in partnership with NOAA and two private companies.  “We’re excited to figure out the best mix of agile technologies for surveying complex, shallow areas — a top priority for Florida, the nation and the globe,” Murawski said. “That’s our primary goal.”

The target areas in Tampa Bay and the Gulf of Mexico exhibit an array of conditions with differences in depth, water clarity, boat traffic and habitat types, which makes this area a fertile testing ground. The work will be applicable to other coastal areas around Florida and beyond, said Murawski, who previously led the 10-year research effort in response to the Deepwater Horizon oil spill. 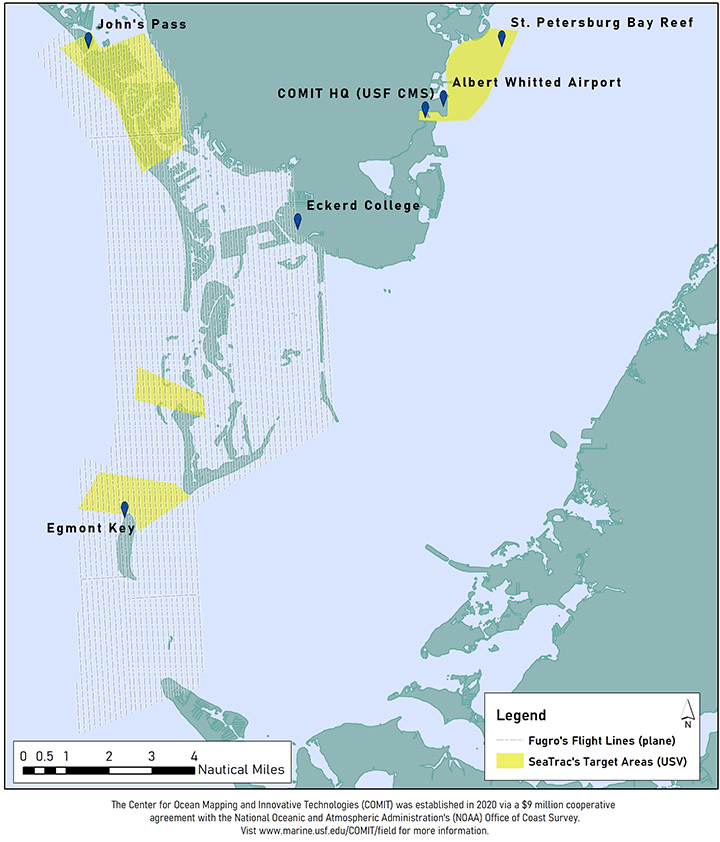 Target areas for the USV and plane on this inaugural coastal mapping expedition in Tampa Bay and the Gulf of Mexico.

The mapping products from this approach will also be used to improve storm surge modeling and prediction, maritime safety, fisheries management and more.

“Coastal resiliency is a top priority for our state, whose valuable natural resources and other assets are vulnerable to rising sea levels, escalating storm events and other environmental hazards,” said Florida House Speaker Chris Sprowls. “I’m delighted to see USF and its partners answering the call for research and innovation in coastal mapping.”

"COMIT and its partners have achieved a significant milestone in advancing USV technologies with this mission,” said Neil Weston, chief scientist in NOAA’s Office of Coast Survey. “Our office is particularly interested in the outcomes from these field trials, especially when new technology approaches can improve our national priorities such as shallow water mapping, coastal resilience and emergency response."

A deeper dive into the experimental technology approach

The USV, about 16 feet long, is powered by solar panels and was built by a Massachusetts-based company called SeaTrac. The boat is autonomous, meaning it operates on its own once a mission is programmed and remotely controlled from shore. A “chase boat” follows the USV to ensure safety of the boat and anything in its vicinity as it progresses along its track, moving at about 3-5 knots, in a manner similar to mowing a lawn. A team of USF graduate students and undergraduate students from Eckerd College will take shifts on the chase boat to watch for marine mammals or other unexpected hazards. The USV’s course can be changed swiftly as needed.

“We’re excited to see how our platform can be leveraged in the broader seafloor survey toolkit to efficiently and effectively map in shallow coastal areas,” said Hobie Boeschenstein, director of business development and operations manager for SeaTrac. “We expect to learn a lot from this inaugural expedition with USF.”

SeaTrac’s work will be complemented by airplane surveys in early January 2022, executed by a global company called Fugro that developed a lightweight survey technology called a Rapid Airborne Multibeam Mapping System (RAMMS). In total, it will survey about 90 square miles mostly between John’s Pass and Anna Maria Island, and one area off Egmont Key in the Gulf of Mexico.

Mark MacDonald, Hydrography Director for Fugro in the Americas, said: “We built RAMMS exactly for this purpose—to deliver efficient, high accuracy nearshore and coastal mapping data that address multiple stakeholder needs, from nautical charting to marine and coastal engineering and coastal zone management. We’re looking forward to seeing how the data will help the COMIT team better understand how we can efficiently map our coastal environments.”

The sensors used by the surface vessel and the plane vary in their resolution and performance under different conditions of water clarity and more – and each has its place in the mix, Murawski said.

In future missions, the COMIT team plans to test sensors mounted on other kinds of vehicles as well, such as drones and robotic gliders. 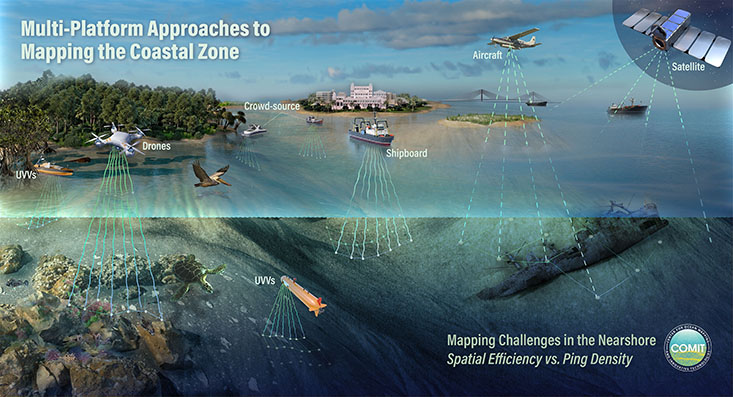 “We have a long history of leadership in coastal resiliency,” said Tom Frazer, dean of the USF CMS, “and it’s thrilling to watch our portfolio of action-based research grow in a way that will benefit the state of Florida and beyond.”

The CMS was recently designated the home of a state-funded Florida Flood Hub for Applied Research & Innovation, which will serve the state of Florida and harness the broad suite of talent that exists within academia, government and private sectors to accomplish its mission. In addition, the college’s expertise sits at the heart of a new Center of Excellence in Environmental and Oceanographic Sciences that aims to establish the USF St. Petersburg campus as a nerve center of innovation around the blue-green economy, sustainability and coastal resiliency.

“This mission is a great example of the kind of innovation you can expect from USF moving forward,” said Frazer. 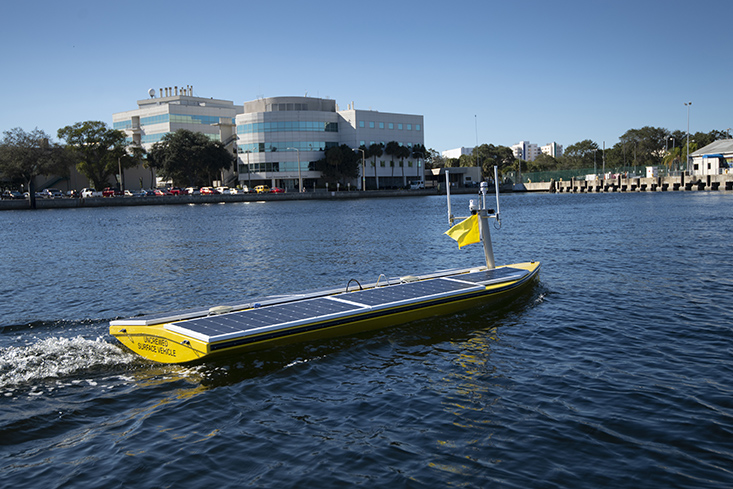 In January 2022 SeaTrac’s work with the USV will be complemented by airplane surveys executed by a global company called Fugro.