Adventure and Exploration on the High-Seas aboard the Okeanos Explorer 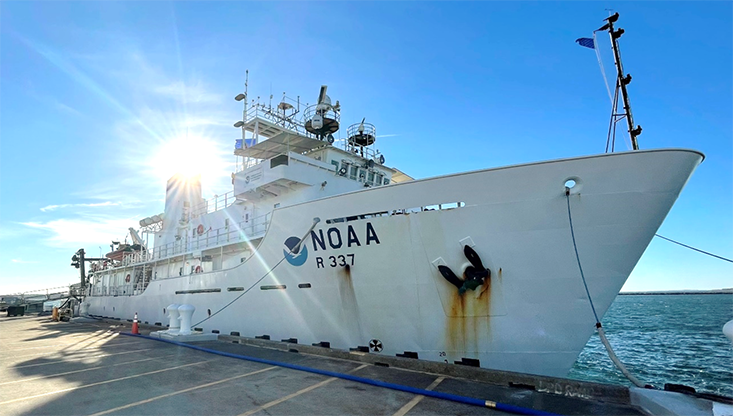 The NOAA Ship Okeanos Explorer docked in port in Newport, Rhode Island. The Okeanos Explorer, commissioned in 2008, is the only federal vessel designated with the sole mission of ocean exploration.

This summer as part of a NOAA Explorer-In-Training internship, I received the incredible opportunity to sail on the NOAA Ship Okeanos Explorer – a dream come true for any ocean science nerd. Many marine science enthusiasts might recognize the ship’s name from the awe-inspiring ROV expeditions that are launched from the ship and streamed live in high definition on the NOAA Ocean Exploration website. The Okeanos Explorer is a one-of-a-kind vessel. For starters, it is the only federally designated vessel whose sole mission is ocean exploration (what?!?). It’s basically the modern-day Nautilus from Jules Verne’s 20,000 Leagues Under the Sea (except, woops just kidding because another exploratory research vessel already took that name. But you get the point! Let me enjoy the fantasy 😉)

The research cruise I am currently on is EX2204, leg 1 of a 3-part “Voyage to the Ridge” expedition. Our goal is to visit unexplored and poorly understood areas of the Mid-Atlantic Ridge – that behemoth underwater mountain chain where the Atlantic Ocean is spreading open to create the next great ocean basin. [Meanwhile, thanks to plate tectonics, the Pacific Ocean is shrinking.]

We are specifically exploring the Charlie-Gibbs fracture zone – a feature found in the high latitude reaches of the North Atlantic. Fracture zones form along spreading centers, like the Mid-Atlantic Ridge. They result from the offset of movement that occurs along a spreading axis on a spherical form (i.e., the Earth). It’s easier to explain when you look at it on a map. Fracture zones run perpendicular to spreading centers and are extensions of faults that form where the spreading center curves. These faults occur because oceanic crust is made of rock that does not easily bend. Therefore, the axis of the ridge does not form a smooth and winding path, but rather a jagged one which is offset by an extensive series of faults and fracture zones. 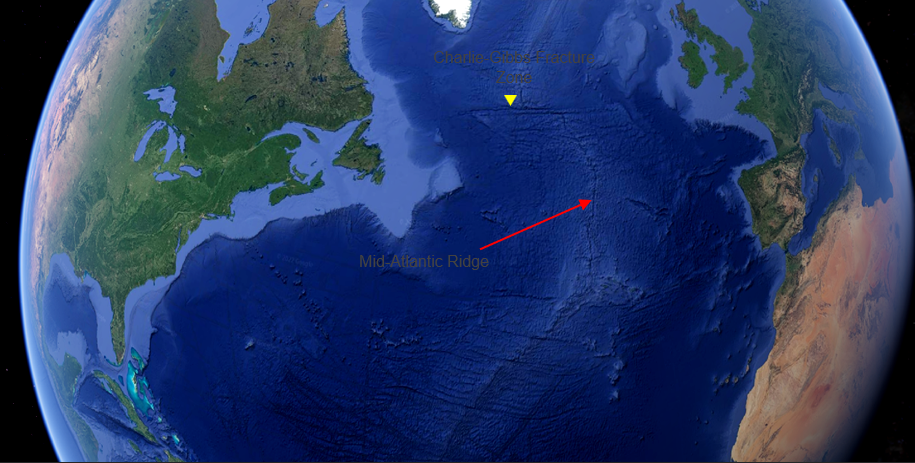 The Mid-Atlantic Ridge and the location of the Charlie-Gibbs Fracture Zone cutting across its northern end. If you follow the ridge south, you can see other fracture zones that are found along it! Sidenote: Google Earth is an AWESOME tool for exploring features of plate tectonics.

Reaching the Charlie-Gibbs fracture zone in the North Atlantic required a 7-day transit. We left from Newport, Rhode Island, and sailed north past Nova Scotia and Newfoundland into the icy cold waters just south of the Arctic Circle. These waters are so cold that the NOAA Corps officers who operate the ship have to be on the look-out for chunks of ice (whose proper name, fun fact, is bergy bits – a classification of ice chunks that while hazardous are not quite as large as a true iceberg).

To explore the fracture zone, scientists first will perform reconnaissance by mapping the area (that’s me!). After the area has been scoped out, and features of interest identified, the next leg, EX2205, will go back with their ROV’s and dive to explore the features up close (it’s going to be awesome to watch these live streams because I’ll get to see the features we mapped in the flesh! How cool?!). 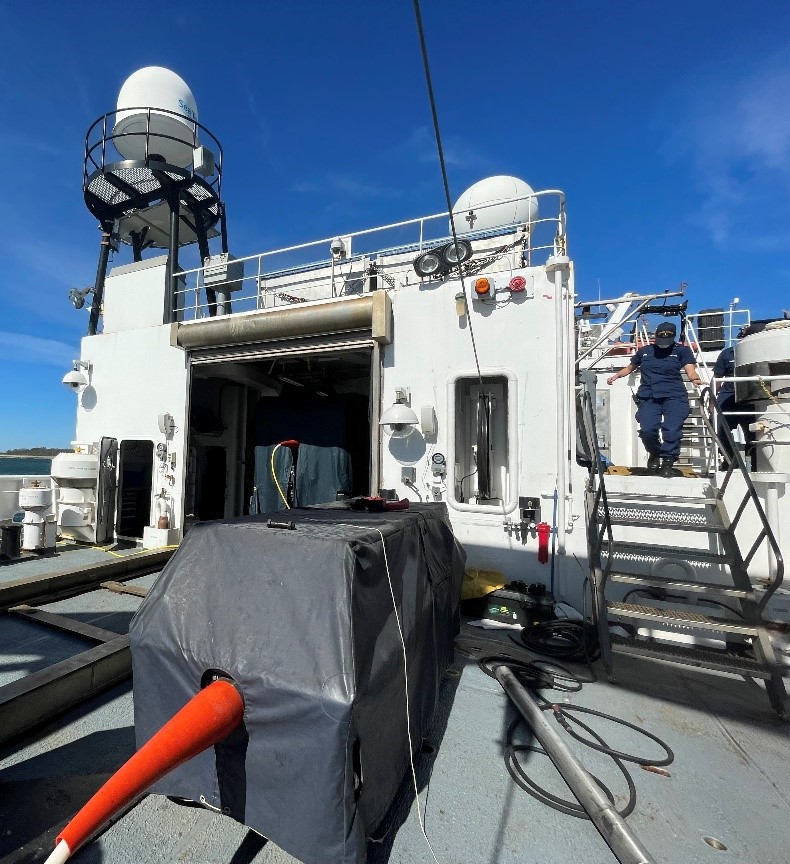 ROV's Deep Discoverer (back, in ROV bay) and its companion, Seirios (front), on the back deck of the Okeanos Explorer. The dual-system configuration provides perspectives from both the main ROV Deep Discoverer as well as a bird’s eye view of it from above it where Seirios hovers.

In order to map the fracture zone, we are using a multibeam echo sounder – the Kongsberg EM304. This sonar is geared towards deep-water exploration (versus others which are better suited for shallow water). The mapping operation is a 24-hour job. Our team includes an expedition coordinator, three mapping leads, a GIS specialist, and three interns.

As we map, we are simultaneously collecting bathymetric data from the multibeam as well as data on the water column and the seafloor using additional sonars and profilers. This magnitude of incoming data amounts to very impressive technological infrastructure on a ship.

The Okeanos is equipped with a massive domed satellite (lovingly referred to by various nicknames: ‘the Epcot Ball,’ ‘the giant golf ball,’ etc.) and its purpose is to enable a high-bandwidth satellite connection for real-time ship-to-shore communications. This is what enables not only the beautiful live feed from the ROV dives, but also gives the ship telepresence capabilities allowing scientists onshore to see new data as it’s coming in. 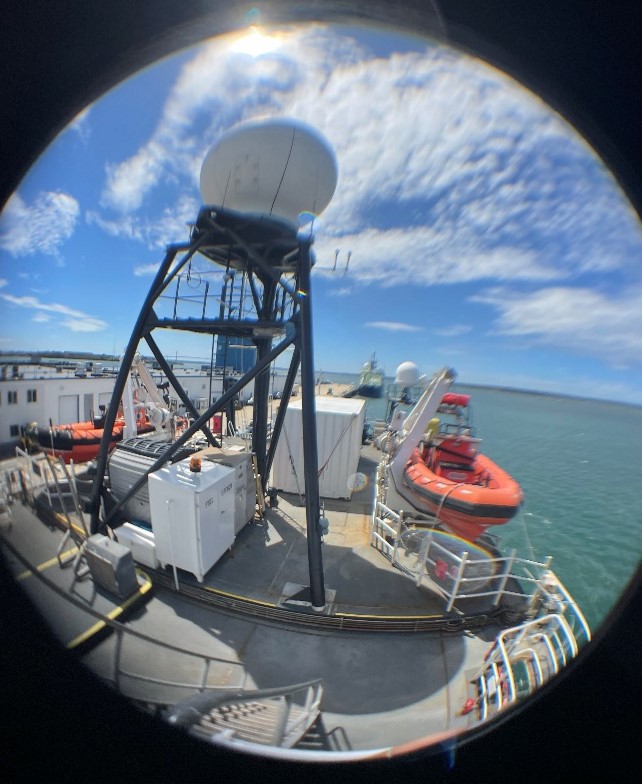 The large dome that houses the Very Small Aperture Terminal (VSAT) antenna – the most important piece of equipment on the boat allowing for high-definition live-streaming and telepresence capabilities that are a signature of the Okeanos’ work.

The benefits of this are multifold – with scientists onshore monitoring and processing data as it comes in, crews on the ship have some breathing room by avoiding work round-the-clock schedules. Additionally, telepresence creates the opportunity for partnerships all over the world with scientists and educators who otherwise may not have the resources to access this kind of data.

Mission control, as it’s aptly named, is the center of activity on the Okeanos. Much like NASA’s mission control, the room is a buzzing center of screens and real-time data acquisition. This is where I’m working for the duration of the cruise, along with the other interns. We will map the entire time we are onboard – including the 7-day transit to Charlie-Gibbs which we just completed.

Our goal is to collect as much multibeam data as possible. This is in response to the Seabed 2030 initiative that aims at mapping the world’s ocean to its entirety by the year 2030 (a lofty goal by most hydrographers standards, but hey deadlines are what get things moving). 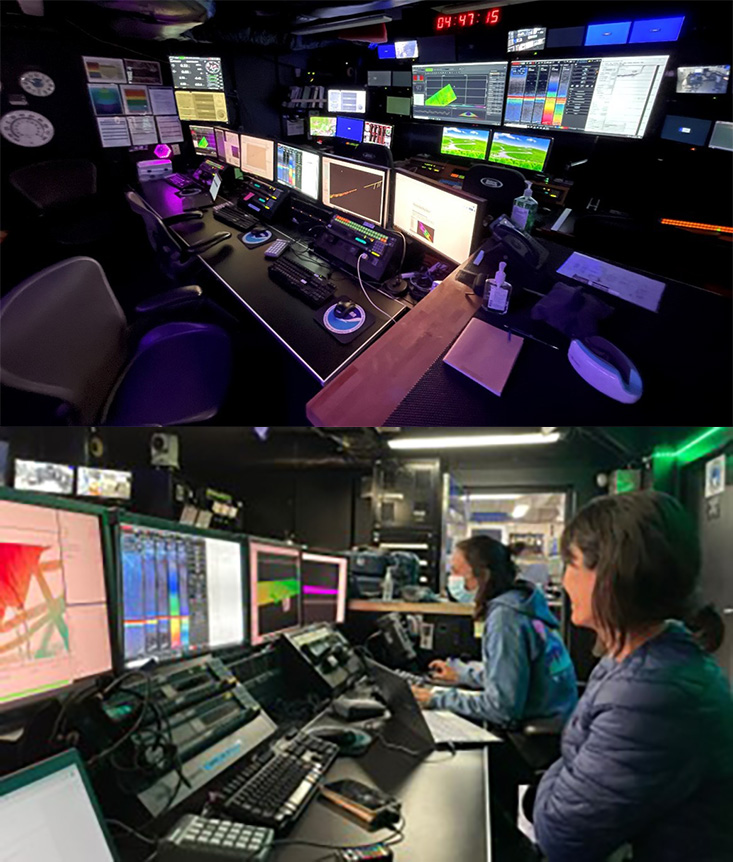 Views from the Mission Control room – the heart of exploration operations on the Okeanos Explorer.

Like any research cruise, this adventure is just as exciting and full of surprises as the last. As we’ve moved north and continue to move east, we maintain our clocks at Eastern Standard Time to avoid having to adjust schedules every time we cross a time zone. While convenient, this means that every day sunrise comes earlier and earlier.

I work the 7:30 pm – 3:30 am shift, and the sun is already beginning to rise at 2 am!!! You can imagine how confused I was the first time I got off my shift and went to bed when it dawned on me (ha, punny!) that it was light out! Like all things on a ship, you eventually become used to it. The same way you become used to swells rolling the ship back and forth like a gigantic, overly enthusiastic baby crib – it just becomes part of your daily routine.

So, as we mark our arrival to our target destination, we look forward to the exciting features we hope to unravel on the seafloor which lies more than 4,000 meters beneath us.