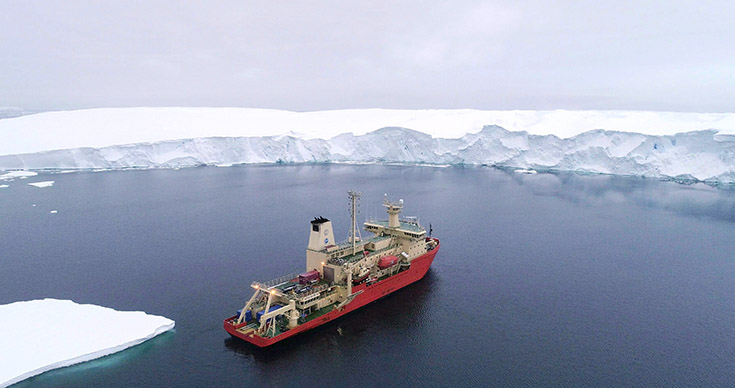 At times in its past, retreat of the massive Thwaites Glacier was even quicker than it is today, heightening concerns for its future.

Image caption (above): The R/V Nathaniel B. Palmer photographed from a drone at Thwaites Glacier ice front in February 2019. (Credit: Alexandra Mazur/University of Gothenburg).

The Thwaites Glacier in West Antarctica – about the size of Florida – has been an elephant in the room for scientists trying to make global sea level rise predictions. This massive ice stream is already in a phase of fast retreat (a “collapse” when viewed on geological timescales) leading to widespread concern about exactly how much, or how fast, it may give up its ice to the ocean. The potential impact of Thwaites’ retreat is spine-chilling: a total loss of the glacier and surrounding icy basins could raise sea level from three to ten feet.

A new study in Nature Geoscience led by marine geophysicist Alastair Graham at the University of South Florida’s College of Marine Science (USF CMS), adds cause for concern.

For the first time, scientists mapped in high-resolution a critical area of the seafloor in front of the glacier that gives them a window into how fast Thwaites retreated and moved in the past. The stunning imagery shows geologic features that are new to science, and also provides a kind of crystal ball to see into Thwaites’ future. In people and ice sheets alike, past behavior is key to understanding future behavior.

A 3D-rendered view of the multibeam bathymetry (seafloor shape) colored by depth, collected by Rán across a seabed ridge, just in front of Thwaites Ice Shelf. (Credit: Alastair Graham/University of South Florida).

The team documented more than 160 parallel ridges that were created, like a footprint, as the glacier’s leading edge retreated and bobbed up and down with the daily tides. “It’s as if you are looking at a tide gauge on the seafloor,” said Graham. “It really blows my mind how beautiful the data are.”

Beauty aside, what’s alarming is that the rate of Thwaites’ retreat that scientists have documented more recently are small compared to the fastest rates of change in its past, said Graham.

To understand Thwaites’ past retreat, the team analyzed the rib-like formations submerged 700 meters (just under half a mile) beneath the polar ocean and factored in the tidal cycle for the region, as predicted by computer models, to show that one rib must have been formed every single day.

At some point in the last 200 years, over a duration of less than six months, the front of glacier lost contact with a seabed ridge and retreated at a rate of more than 2.1 kilometers per year (1.3 miles per year) -- twice the rate documented using satellites between 2011 and 2019.

“Our results suggest that pulses of very rapid retreat have occurred at Thwaites Glacier in the last two centuries, and possibly as recently as the mid-20th Century,” said Graham.

“Thwaites is really holding on today by its fingernails, and we should expect to see big changes over small timescales in the future – even from one year to the next – once the glacier retreats beyond a shallow ridge in its bed,” said marine geophysicist and study co-author, Robert Larter, from the British Antarctic Survey. 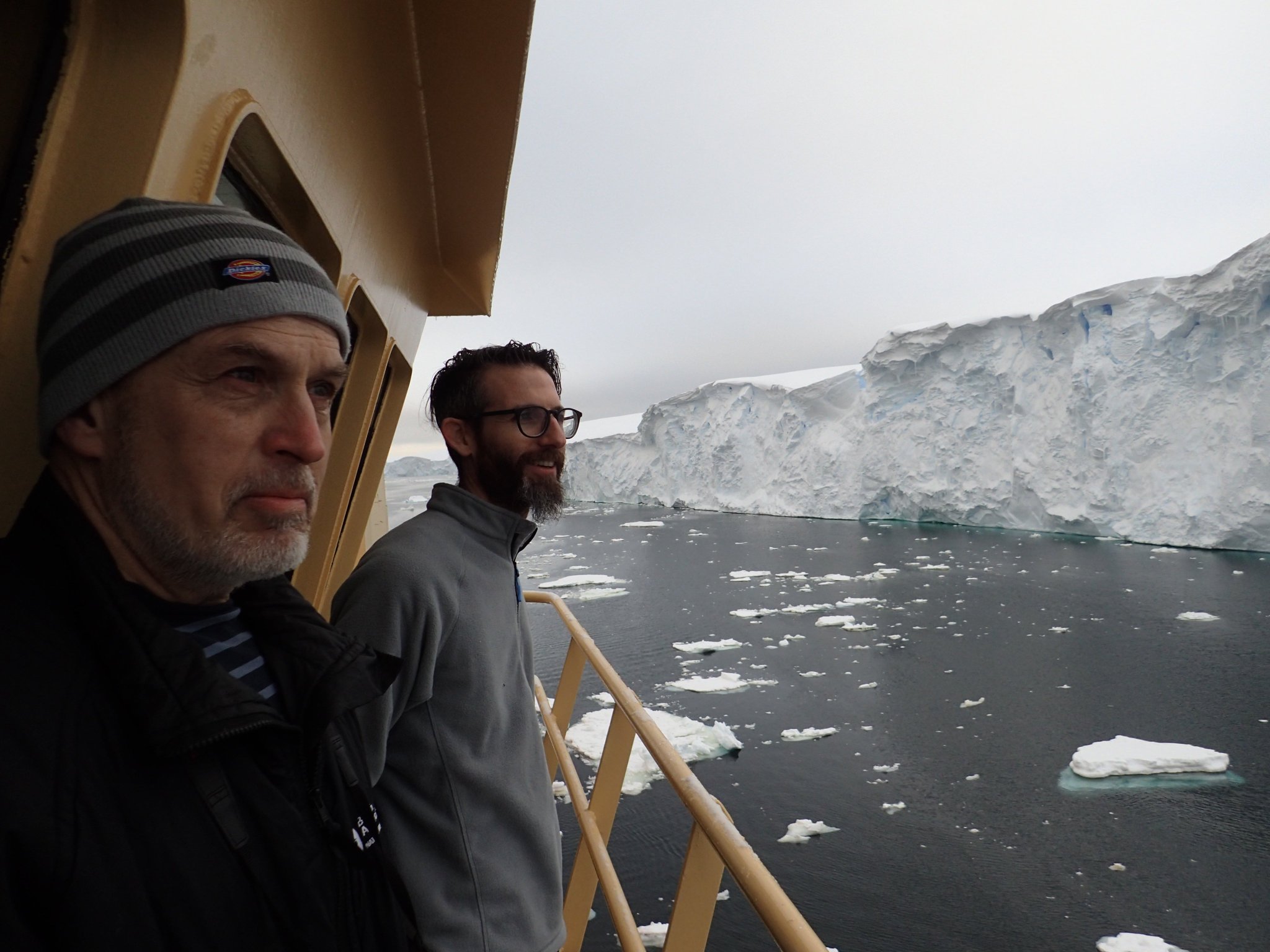 THOR scientists Alastair Graham (right) and Robert Larter (left) look on in awe at the crumbling ice face of the Thwaites Glacier margin, from the bridge deck of the R/V Nathaniel B. Palmer. (Credit: Frank Nitsche).

To collect the imagery and supporting geophysical data, the team, which included scientists from the United States, the United Kingdom, and Sweden, launched a state-of-the-art orange robotic vehicle loaded with imaging sensors called ‘Rán’ from the R/V Nathaniel B. Palmer during an expedition in 2019. Rán, operated by scientists at the University of Gothenburg in Sweden, embarked on a 20-hour mission that was as risky as it was serendipitous, Graham said. It mapped an area of the seabed in front of the glacier about the size of Houston – and did so in extreme conditions during an unusual summer notable for its lack of sea ice. This allowed scientists to access the glacier front for the first time in history.

Anna Wåhlin, a physical oceanographer from the University of Gothenburg who deployed Rán at Thwaites, said, “This was a pioneering study of the ocean floor, made possible by recent technological advancements in autonomous ocean mapping and a bold decision by the Wallenberg foundation to invest into this research infrastructure. The images Ran collected give us vital insights into the processes happening at the critical junction between the glacier and the ocean today.” 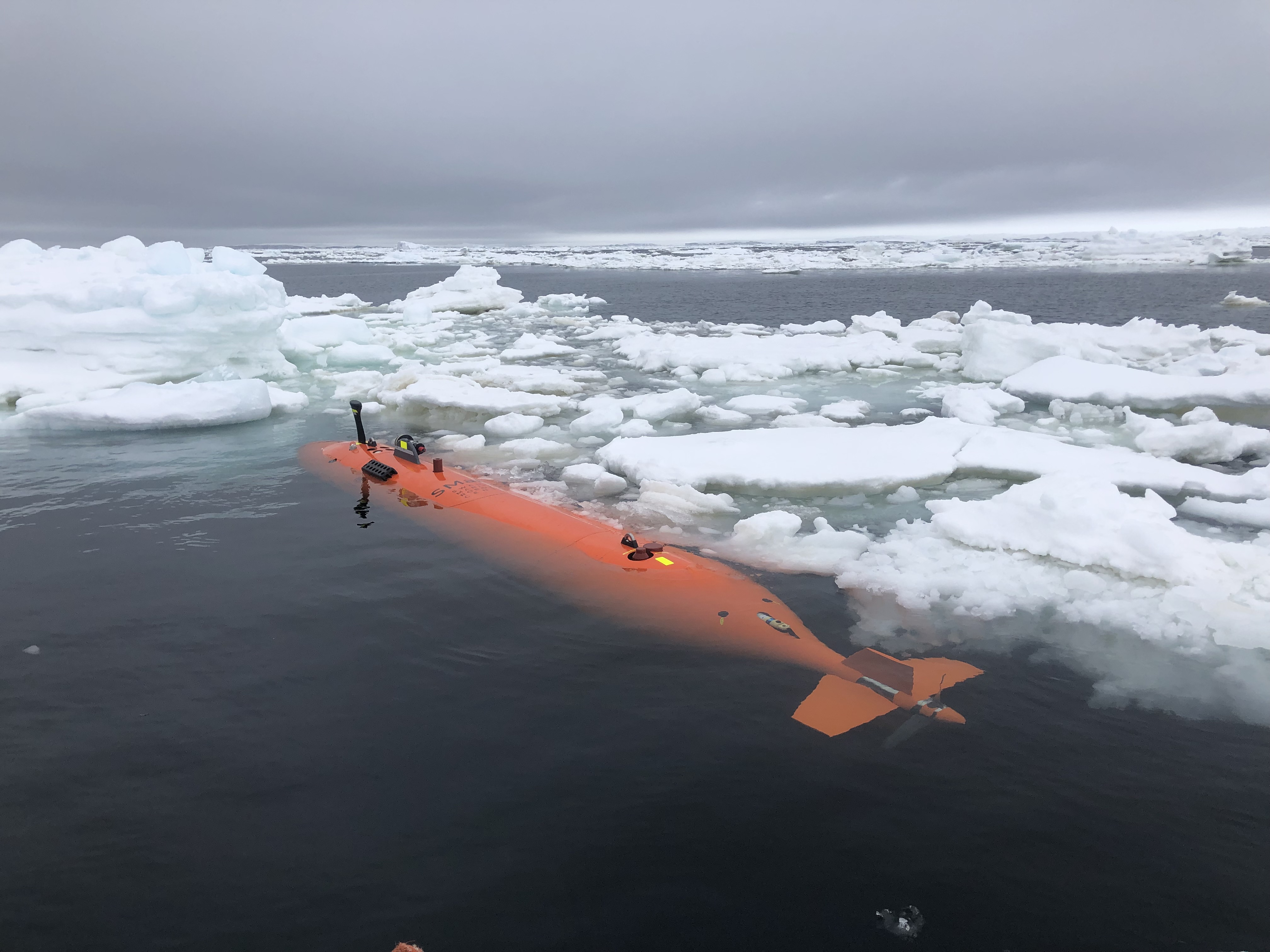 “It was truly a once in a lifetime mission,” said Graham, who said the team would like to sample the seabed sediments directly so they can more accurately date the ridge-like features. “But the ice closed in on us pretty quickly and we had to leave before we could do that on this expedition,” he said.

While many questions remain, one thing’s for sure: It used to be that scientists thought of the Antarctic ice sheets as sluggish and slow to respond, but that’s simply not true, said Graham.

“Just a small kick to Thwaites could lead to a big response,” he said. 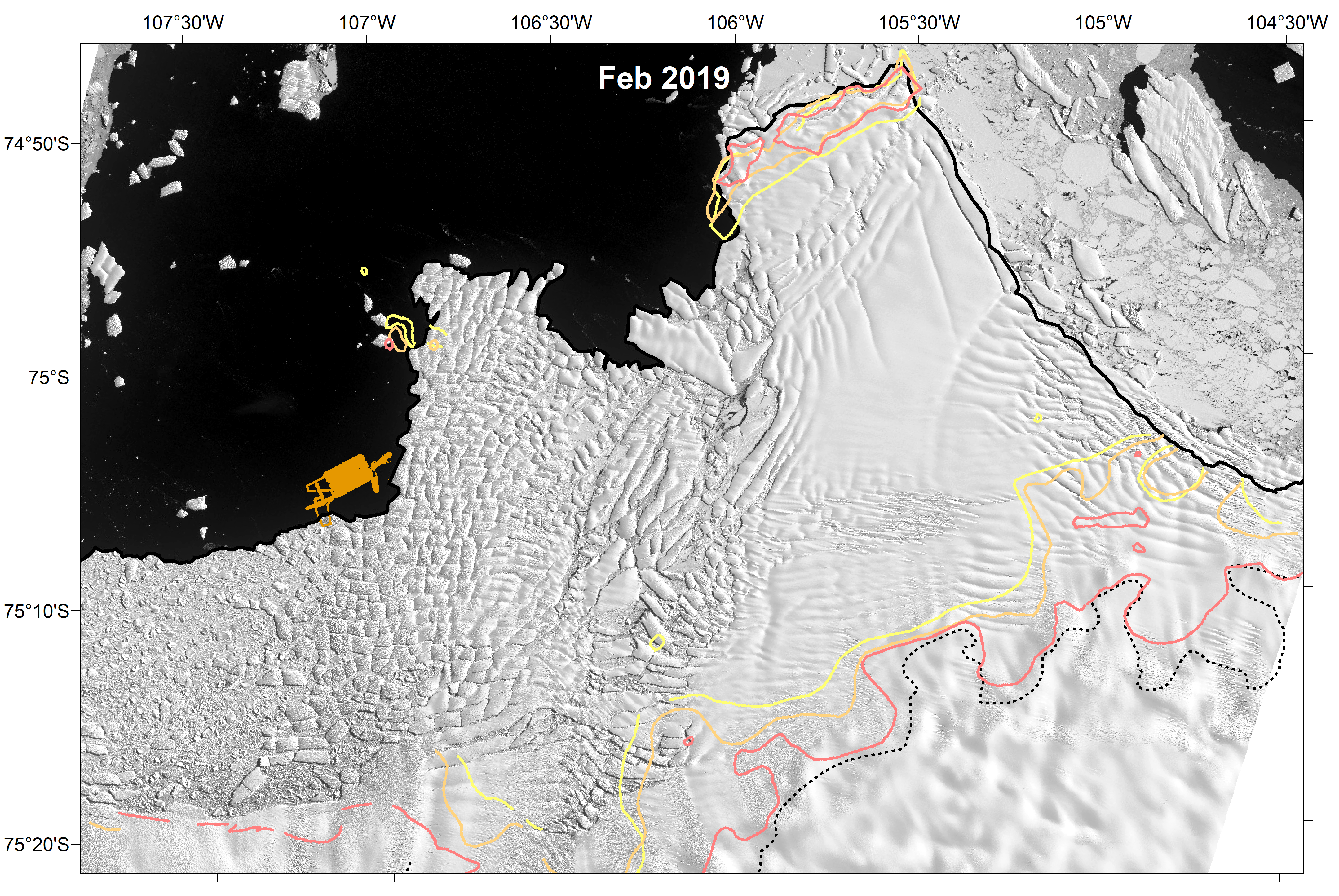 Map of Thwaites Glacier shown in Landsat 8 satellite imagery collected in February 2019. The track of the mission of the autonomous underwater vehicle is shown in orange. Changes in grounding line positions of Thwaites Glacier in the recent past shown by colored lines. (Credit: Alastair Graham/University of South Florida).

According to the United Nations, roughly 40 percent of the human population lives within 60 miles of the coast. “This study is part of a cross-disciplinary collective effort to understand the Thwaites Glacier system better,” said Tom Frazer, dean of the USF CMS, “and just because it’s out of sight, we can’t have Thwaites out of mind. This study is an important step forward in providing essential information to inform global planning efforts.”

The study was supported by the National Science Foundation and the UK Natural Environment Research Council through the International Thwaites Glacier Collaboration (ITGC). The 2019 expedition was the first in a 5-year project dubbed THOR, which stands for Thwaites Offshore Research, and also included team members from a sister project called the Thwaites-Amundsen Regional Survey and Network Integrating Atmosphere-Ice-Ocean Processes, or TARSAN.

For more information, read this companion story authored by Graham and the team.

View more imagery from this historic expedition below.