Fjords: small-but-mighty planetary “thermostats” whose role in the global carbon cycle is both sink and source 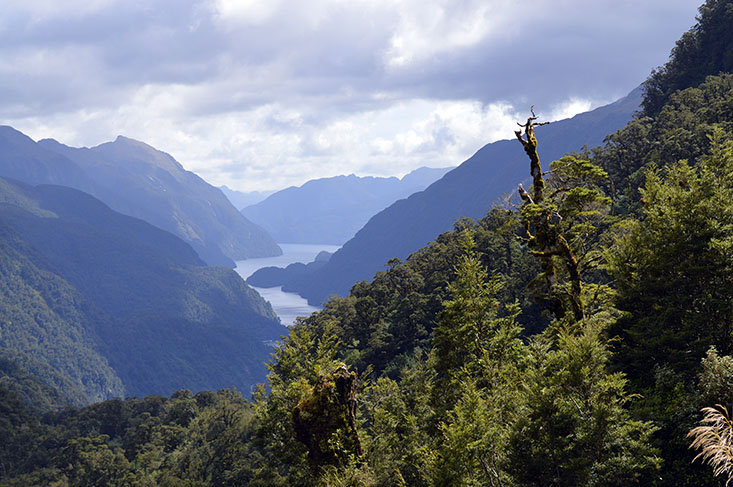 Doubtful Sound, New Zealand, which Dr. Xingqian Cui visited in 2016, was apparently so-named because its discoverer, Captain James Cook, decided if he and the crew ventured into the fjord during a voyage in 1770, it would be “doubtful” that they would be able to sail back out of the fjord against the westerly wind.

If you’re worried about escalating human-induced climate change, consider adding fjords to your thank-you list during this season of gratitude.

Fjords are long, deep arms of the sea carved by glaciers that are surrounded by breathtaking cliffs. More than just a pretty face on the planet, fjords comprise a mere 0.1% of the surface area of the ocean yet store a whopping 11-12% of the carbon stored in the ocean. In other words, they sock away 18 million tons of carbon during interglacial periods, like the one we’re in now, even though they take up the space equivalent of a speck of zest on an orange.

“Fjords punch far above their weight in their ability to pull out a lot of carbon from the atmosphere and store it in the mud,” said Brad Rosenheim, geological oceanography professor and paleoclimate expert at the USF College of Marine Science, who explained that scientists only learned of this small-but-mighty role recently. In 2015, an ocean geochemist and professor at the University of Florida, Thomas Bianchi, pioneered a Nature Geosciences study, with his graduate student at the time, Richard Smith (now at Global Aquatic Research LLC), that first opened scientists’ eyes to the powerful role that fjords play in global carbon storage, he said.

But nothing stays the same forever. A vexing question became an itch that marine scientists couldn’t scratch for years after Bianchi’s seminal study:

Are fjords the carbon storage gift that keeps on giving, or is their ability to store carbon-rich sediments deep in their bellies temporary? What will happen during the next glacial period to that locked-away warehouse of carbon when it is again exposed to oxygen as the ice returns and the waters recede? 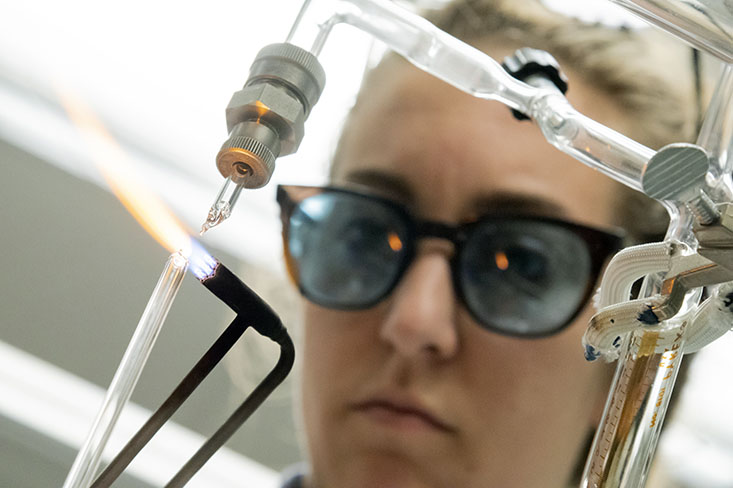 Dr. Ryan Venturelli working with samples in the Ramped Pyrox C-14 System, which Brad Rosenheim calls the “dirt burner.” Now an Assistant Professor at the Colorado School of Mines, Venturelli was a student in Brad Rosenheim’s lab and helped process some of Xingqian Cui’s samples for the Science Advances study.

Answering the question would require an understanding of how reactive the carbon in fjord sediments is compared to the carbon buried in other ocean reservoirs, such as at the bottom of the middle of the ocean far away from the coast, Rosenheim said. It turns out that a unique instrument Rosenheim developed, the Ramped Pyrox C-14 System, which he affectionately calls the “dirt burner,” was instrumental in solving the mystery.

The work, published recently in Science Advances, unearths a new understanding of the role of fjords in the global carbon cycle. The bottom line: they act as both carbon sink and source.

The research, which included Rosenheim and Bianchi as coauthors, was led by Xingqian Cui, now a professor at Shanghai Jiao Tong University in China. Cui had visited Rosenheim’s lab several years ago when he was a Ph.D. student at the University of Florida working under the tutelage of Bianchi.

“In this study we showed that the carbon buried in fjords is more thermally labile than that in global sediments,” said Cui. The team collected sediment samples from 25 fjords around the world, placed them in Rosenheim’s dirt burner, gradually increased the temperature, recorded when and how fast the organic matter broke down, and turned that into a “reaction energy” equivalent. In short, the fjord sediments were highly reactive.

What that reactivity means is that the rock-star ability of fjords to sock away the carbon is transitory, not permanent.  Fjords are carbon sinks during interglacial periods and become carbon sources during glacial periods. 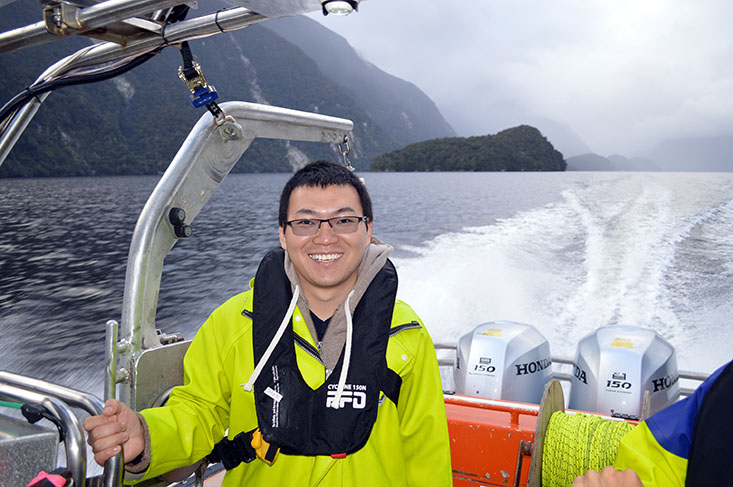 Dr. Xingqian Cui visiting Doubtful Sound, the deepest of New Zealand’s fjords, in 2016. Doubtful Sound was named Patea by its Maori settlers, which translates into “the place of silence.”

Akin to the thermostat in your home, fjords help regulate temperature. They counterbalance the cooling of the planet in glacial periods by adding roughly 50 parts per million of carbon dioxide back to the atmosphere, said Cui.

One key takeaway from this work is that we need to focus on these smaller parts of the carbon cycle system, such as mangroves, which also store a lot of carbon, said Rosenheim.

“Fjords take up a small amount of space, but they play a significant role in modulating temperature swings from glacial to interglacial periods,” said Rosenheim. “Human-caused warming of the planet interrupts this heartbeat of natural glacial-interglacial cycles whereby our understanding of fjords and other hot spots of carbon storage becomes critical.”

For a long time, fjords were overlooked merely because of their size relative to the vast ocean basin, he said – proving once again that size doesn’t matter.