Humans Responsible for over 90% of World's Oil Slicks

St. Petersburg, Fla. — A team of Chinese and U.S. scientists developed the first global map of chronic oil slicks in the ocean and found that more than 90% of them come from human sources, significantly more than previously reported.

The results, published in Science, provide a major update from previous investigations that estimated that about half of the oil pollution in the ocean came from human sources -- including river runoff, ships, and oil and gas pipelines and platforms -- and half from natural sources, such as seeps on the seafloor.

“Most of these oil slicks are microscopically thin, widely observed, and different from major oil spills,” said Chuanmin Hu, study coauthor and professor at the University of South Florida’s College of Marine Science where he runs an Optical Oceanography Laboratory.  “They are a source of chronic pollution and have traditionally been hard to track because they are short-lived and move with the winds, tides, and currents.” 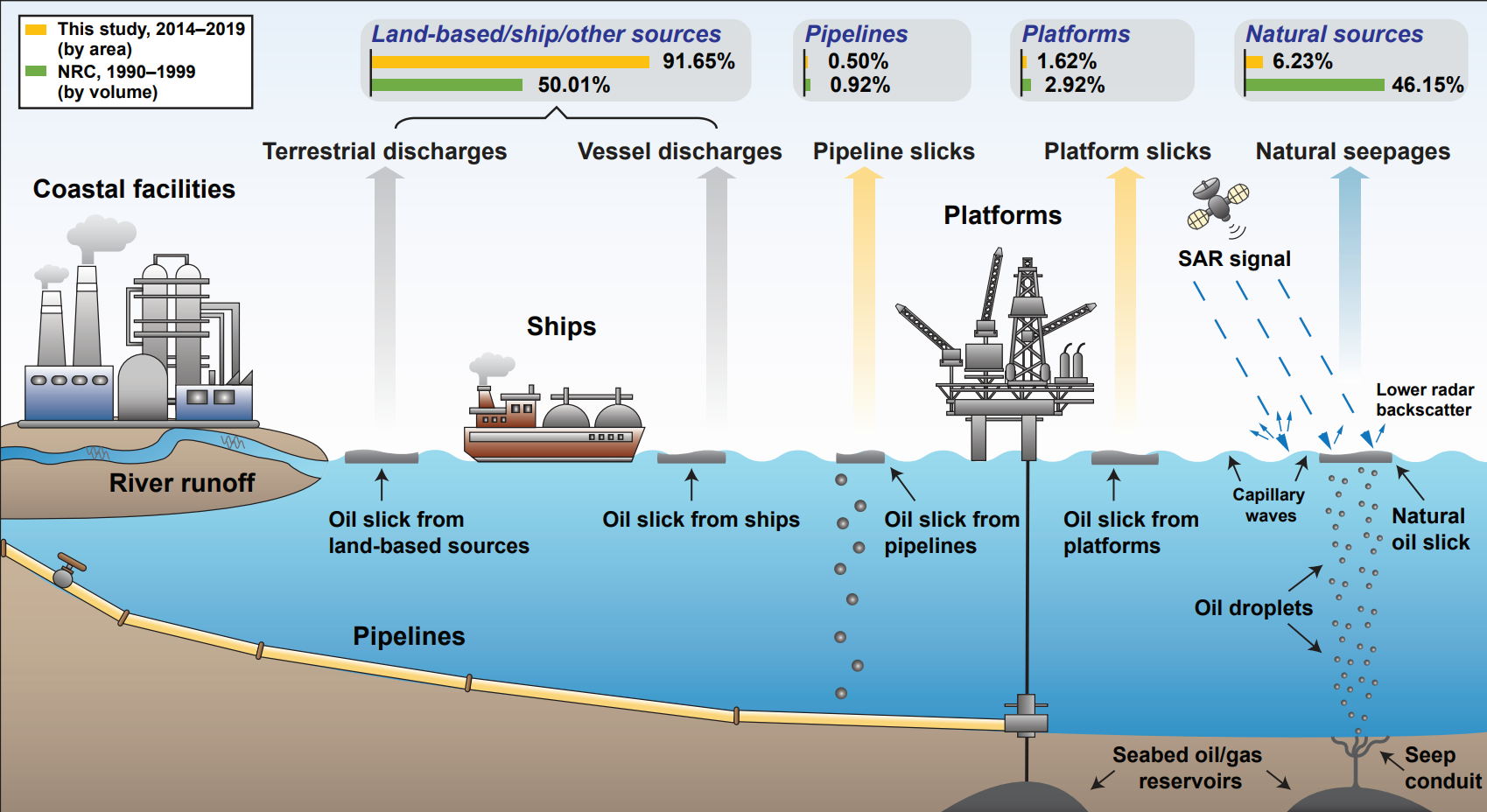 Oil slicks from different sources entering into the marine environment. The orange bars in the legend refer to the contributions of natural and anthropogenic sources during 2014-2019 derived in this study, and the green bars are those of 1990-1999 estimated by the NRC.

For this study, the team used machine learning and other techniques to examine more than a half million satellite radar images collected during 2014-2019 to determine the location, extent and probable sources of chronic oil pollution. 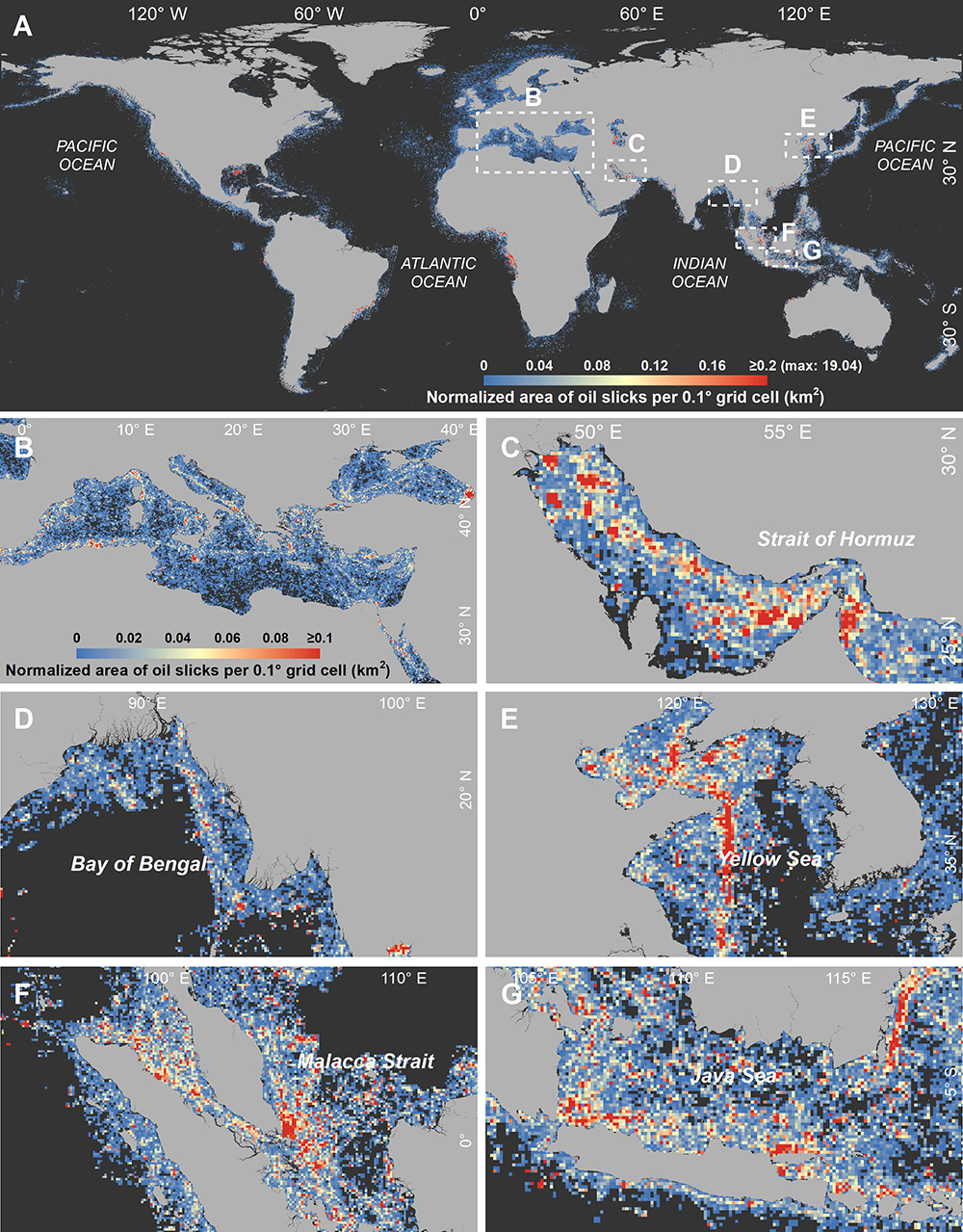 Global distribution of oil slicks (2014-2019).  (A) Normalized area of oil slicks in a 0.1 x 0.1 grid representing oil slick area per full-coverage SAR observation (synthetic aperture radar). (B to G) Enlarged views of areas in white dashed boxes in (A). High-density belts caused by oil pollution from ships can be observed.

“Satellite imagery offers an efficient way to monitor oil pollution in the ocean,” said Hu, “especially in areas that are difficult for humans to get to.”

“What’s compelling about these results is just how frequently we detected these floating oil slicks — from small releases, from ships, from natural sources, from pipelines and then also from areas where industry or populations are producing runoff that contains floating oil,” said Ian MacDonald, another coauthor and professor in the Department of Earth, Ocean and Atmospheric Science at Florida State University.

Even a miniscule amount of oil can have a big impact on plankton that make up the base of the ocean food system. Larval fishes are particularly vulnerable. Other marine animals, such as whales and sea turtles, are harmed when they contact oil as they surface to breathe.

Underwater video of natural oil and gas seep in the northern Gulf of Mexico at a depth of 3600 feet. Credit: Ian MacDonald, Florida State University

Researchers found most oil slicks occurred near the coast. About half were within 25 miles of the coast, and 90% were within 100 miles. The researchers found relatively fewer oil slicks near oil platforms in the Gulf of Mexico compared to elsewhere on the globe, suggesting that regulation, enforcement and compliance from oil platform operators in U.S. waters reduce leakage. 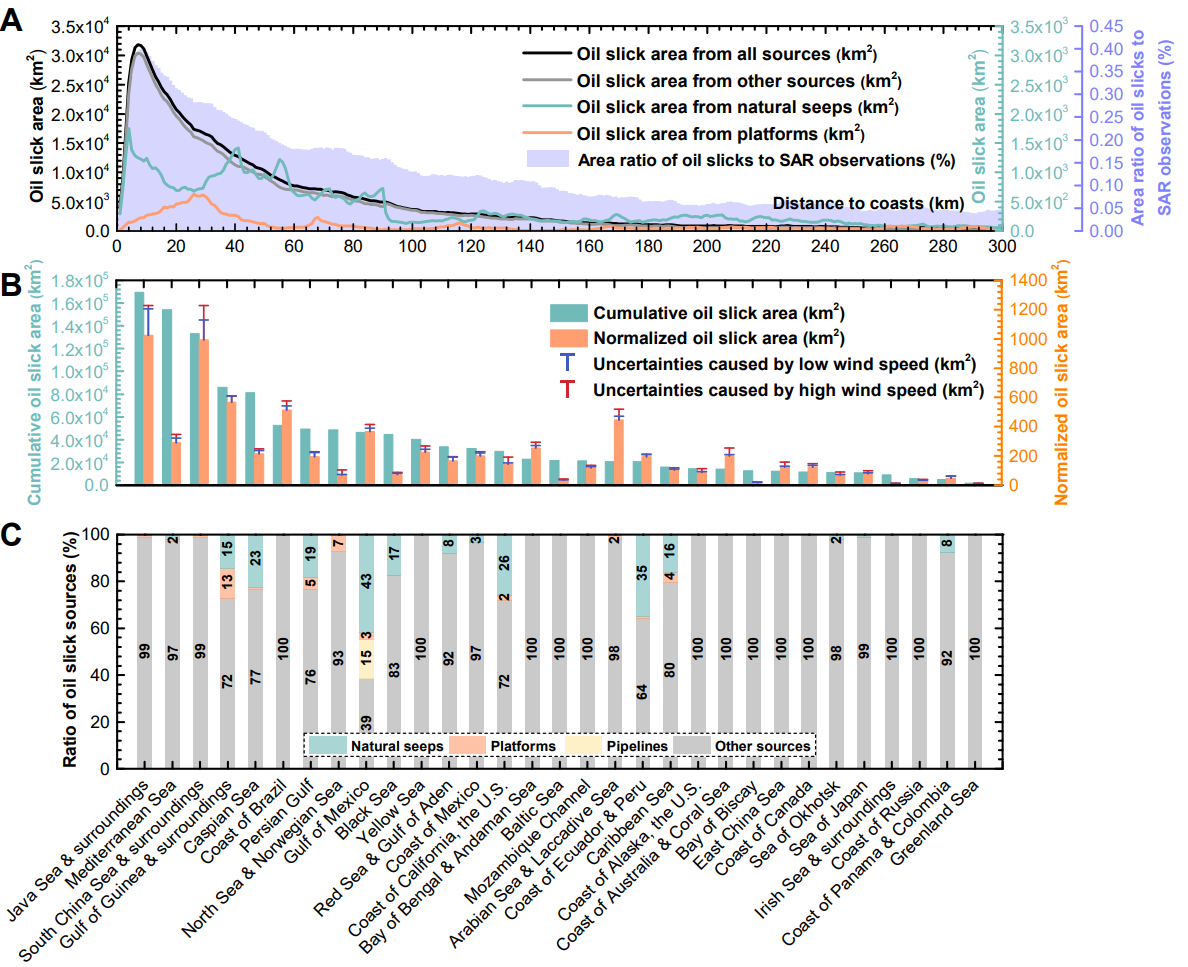 Offshore oil production accounted for less than two percent of the chronic oiling, but 21 distinct high-density belts of oil slicks were found to coincide with shipping routes.

“A global picture can help focus regulation and enforcement to reduce oil pollution,” said Yongxue Liu, corresponding author of the study and professor at Nanjing University’s School of Geography and Ocean Science.

An oil slick leaking from a drilling platform in the Gulf of Mexico in 2012. Credit: Ian MacDonald / Florida State University

An oil slick forms on the surface of the ocean after leaking from a pipeline in the northern Gulf of Mexico in 2016. Credit: Ian MacDonald / Florida State University

Ms. Yanzhu Dong and Professor Yingcheng Lu, also from Nanjing University of China, were the lead author and coauthor of the study, respectively. This work was supported by the Key Research and Development Program of China.