Solving the mysteries of nickel: an oceanic paradox 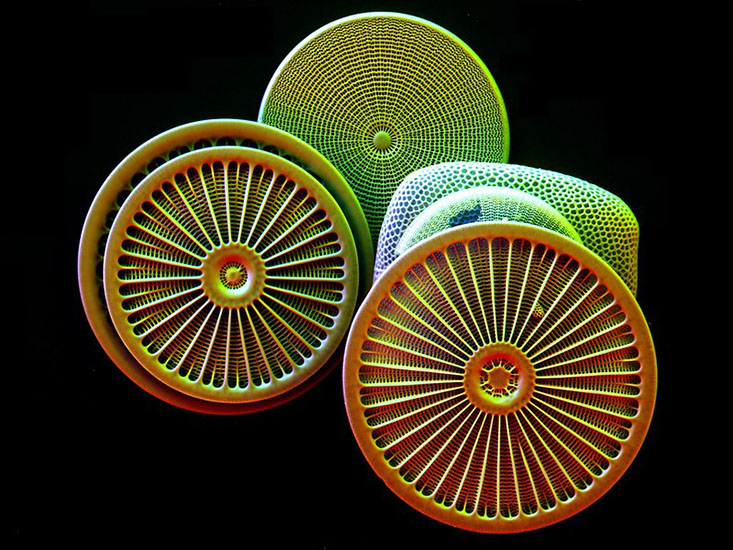 As with terrestrial life, all oceanic life needs nutrients such as nitrate, phosphate, carbon, and various trace metals to survive. In the vast open gyres of the ocean, such nutrients are increasingly hard to come by. In these marine ‘deserts’ microscopic plankton–the basis of the marine food web and drivers of global carbon cycling–struggle to find enough to thrive. Of these trace metals, the element nickel is vital for microbes taking up carbon or fixing nitrogen gas from the air, as well as for symbionts who keep coral reefs alive and healthy. 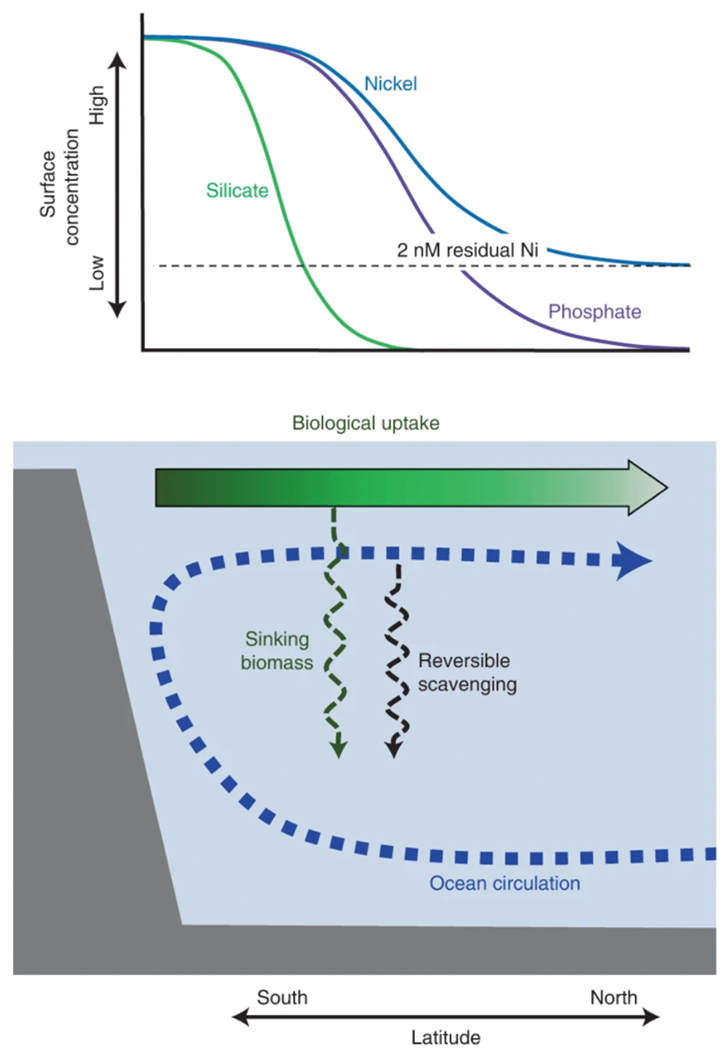 Addressing the Nickel Paradoxes - nickel never reaches near-zero levels in surface waters of the ocean because it gets used more slowly. A mix of slow release and scavenging/adsorption to particles take nickel deep into the ocean interior.

There is a puzzle with nickel, however. While other nutrients are drawn down to zero in oceanic gyres, and nickel is vital for life, nickel always remains high in surface waters, leading people to suggest that this nickel is in a form that cannot be taken up by plankton. We may have just solved the mystery, as reported in Nature Geoscience.  I was part of the team led by scientists from the University of Southern California (USC). We used a mix of field data, chemical experiments, plankton culturing and global ocean modelling to provide a new view on ocean nickel cycling.

Here's a key takeaway: We show conclusively that this surface nickel pool that was thought unavailable is in fact available for microbes to use. It’s just there isn’t enough of elements like phosphate available to make use of the nickel that’s there.

A second mystery related to nickel is why it accumulates deep in the ocean interior, whereas elements like phosphate are released at more shallow depths (as plankton die and degrade). Previously it was thought that this was because nickel was inside sinking diatom shells (known as frustules) that dissolve slowly and thus sink, while phosphate dissolves more easily from the organic tissue of cells. 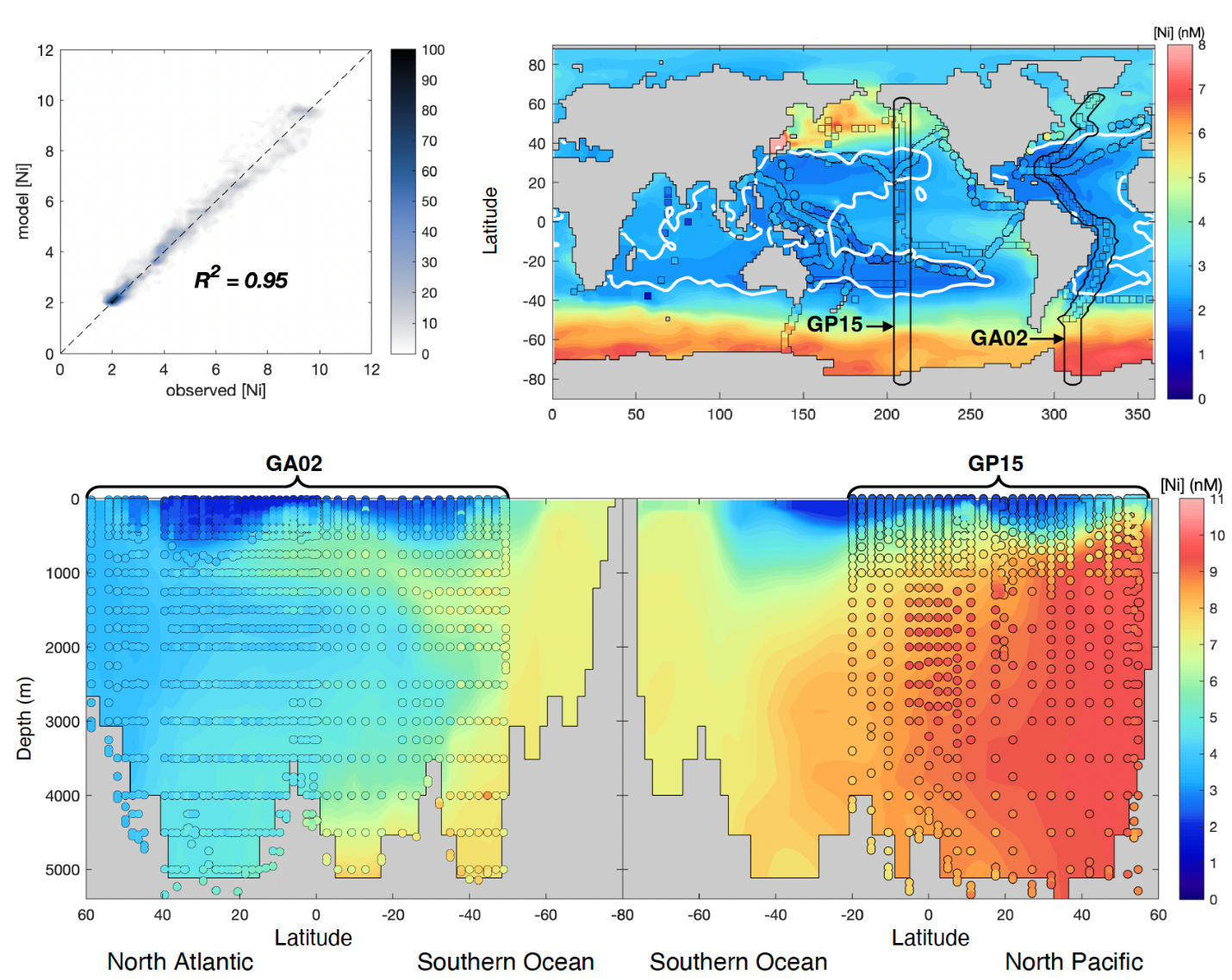 New compilation of dissolved nickel data (dots) from GEOTRACES overlaid on output from ocean biogeochemical modelling (background). The model reproduces the distribution of nickel while assuming all nickel is available to plankton, and that nickel is taken deep into the ocean by reversible scavenging or slow release.

However, our new study suggests otherwise. We studied natural and cultured diatom cells and showed that there was very little nickel in their frustules. We also put together the largest ever spatial compilation of dissolved nickel in the oceans, which included new data from the US GEOTRACES North Pacific section (Alaska-Tahiti), and used this to inform a model of the global nickel cycle. Together, we show that nickel is not taken to depth in diatoms, but instead gets taken down deeper than expected into the ocean interior because some of it gets adsorbed onto particles or it simply gets released from degrading phytoplankton very slowly.

So why should we care? Well, our view suggests that nickel is perhaps uniquely susceptible to changes in nutrient uptake in the ocean, and a nudge either way makes the difference between microbial feast and famine, especially in the distant past.

This work was funded by the National Science Foundation.