Stretching our Sea Legs: A story from the 2022 Pelagic Ecology Cruise 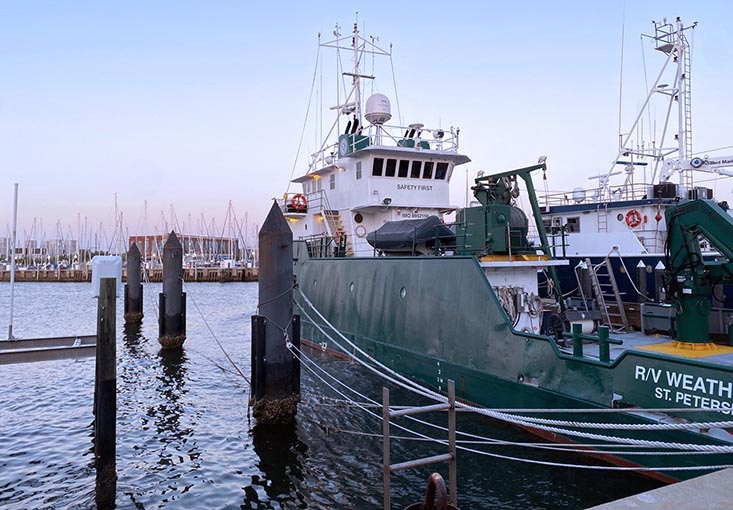 The R/V Weatherbird II preparing for a five day cruise in the Gulf of Mexico. Photo credit: Carlyn Scott

FOR THE FULL EXPERIENCE VIEW OUR MULTIMEDIA STORY PRESENTATION

I’ve been out on the water before. I’ve ridden pontoon boats on the Potomac, kayaked in the Chesapeake, swum along the beaches of the Pacific. But never ‘out out’, past the safety of Tampa Bay to the point where you can no longer see the twinkling lights of downtown or even the mass of land as the boat steadily chugs along. I finally broke this streak when I took a trip with the Pelagic Ecology course for a five-day cruise in the Gulf of Mexico.

This trip was organized by Dr. Brad Seibel along with Tracy Shaw, the lab manager of the Comparative Environmental Physiology lab. The course gives students an opportunity to experience a research cruise – especially powerful for those who, for one reason or another, may otherwise have gone their whole time at CMS with dry feet. This was the case for me, a zooplankton ecologist working with data that was collected 10 years prior to my arrival at CMS. I’ve certainly spent more time working on my laptop than working in the field.

Because of this, I am both very pale and unfortunately ‘land lubby’.

This was apparently obvious to at least one crew member of the ship, as members of the Pelagic Ecology class formed a group on the dock before getting on the boat.  “You’re the grad students?” – actually more of a statement than question. “I could tell,” he said as he motioned to his face, “…the glasses.” We looked around at each other, confirming that we were, in fact, the four-eyed caricatures of higher education. 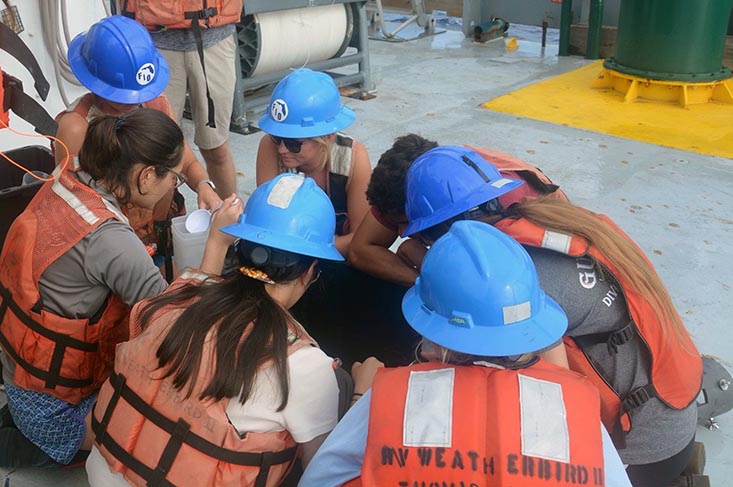 But I hoped for the obviousness of land-boundness to become less apparent on this trip aboard the R/V Weatherbird II, and as we passed under the Skyway Bridge towards the open waters of the Gulf, I felt ecstatic at how well I was adapting to the gentle swells that rocked the 115-foot boat.

I was foolishly confident in those perfect two hours before we reached the shelf, outside the shelter of the Bay where the seafloor is deep enough to produce and sustain larger waves. As pods of dolphins swam and jumped along the wakes of the ship, sending us off on our journey, I was blissfully and thankfully unaware of my impending seasickness but fully aware of how insanely lucky I was to be on this ship. 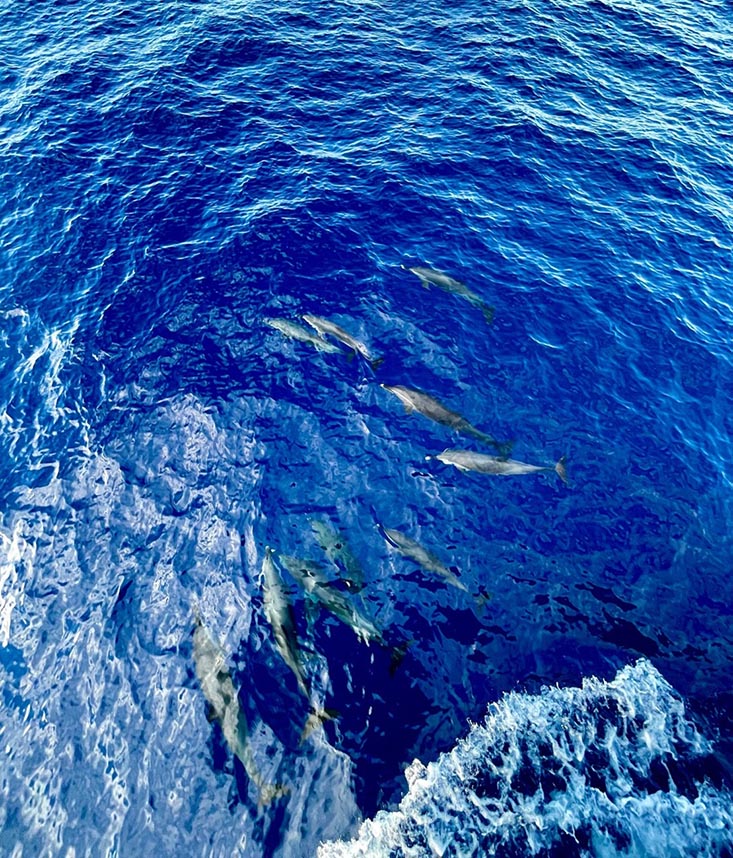 There are many medications available to combat the effect of seasickness. All have pros and cons. Regardless of a person’s medication of choice, a dose of these often leaves you with a feeling of drowsiness, which is why the limp bodies of my peers were strewn across the deck the ship, reclining against any surface available in an attempt to sleep off their nausea. I wasn’t the only one suffering – if still, gratefully.

Besides the sleepiness, the other feeling I was immediately and constantly struck with? Awe.

As the boat made its way farther and farther from shore, the water transformed in hues of blue- from turquoise, then deep blue, then the deepest richest cobalt blue I had ever seen. A bit of nerding out now: Water is blue due to light from the sun emitted via wavelengths of various lengths, with blue being a shorter wavelength and is absorbed first. Thus, as the short wavelength hits the ocean, it scatters giving water its bluish appearance. The shade of blue depends on the depth of the water and how many particles, such as phytoplankton or suspended sediment, are present to scatter light. Out in the oligotrophic waters of the Gulf there aren’t enough nutrients to sustain blooms of plankton, and the deficiency of primary productivity means the water is saturated in pristine blues, untainted by the greenish sheen of chlorophyll.

On ship, our productivity was equally encumbered.

For those unfamiliar with amenities on a research ship, everything is tight — small but functional. This includes the lab space, a long hallway with lab benches lining the walls and enough space to squeeze past each other carrying your plankton sample to a microscope. It was in this room that I was the happiest, searching for my study organisms, larvaceans, among a sea of unknown free-floating alien like plankton, a textbook open beside me.

It was also in this room that Dr. Seibel performed a squid dissection as we crowded around, enraptured by the flashes of color produced by the deceased organisms’ still active chromatophores -- red, yellow, and orange blotches pulsating on the screen connected to the microscope. He swiftly cut into the mantle, revealing organs and the pen of the squid, a remnant of the external shell of its cephalopod ancestors that provides rigidity for their soft body. Most of the students had seen this type of dissection before but we still gathered around the microscope eager to see.

On the whiteboard in the lab was a schedule consisting of CTD casts, plankton tows, and tucker trawls that defined our days. Time seems to function differently on a ship, specifically in its meaning. On a 24-hour crewed ship, you can emerge from the hull at midnight and find someone eating breakfast. This meant you kept your voice down and tried to keep quiet as at any point in the day in case someone was sleeping. This also meant as a student scientist on board, it was easier to define the day by meals and CTD casts. In this way, the varied but enforced schedule was a welcome refresher from life on land.

As a grad student there is a freedom in creating your own schedule which can quickly turn into a prison of procrastination and self-imposed anxiety, with deadlines looming over every recreational lunch break and less than productive day. Here on the ship, there was nothing I could do but wait for the next meal and the next sampling opportunity. For the in-between times, I naively brought along my laptop believing I would be able to crank out my 10-page final term paper that was due shortly after our arrival back on shore.

The combined effect of the seasickness, and the medication I had taken to combat the seasickness made reading (and focusing) impossible. Instead, in an attempt to avoid seasickness brought on by staring at my laptop, I spent most of my time on the deck staring at the horizon and the vast blueness of the ocean beneath it.

On land there is a constant list of things needing attention: zoom calls, meetings, drafts, all enabled by the immediacy that the internet provides. In these moments, I had nothing to consider but the rolling waves. I was thankful for the lack of internet, the wind on my face, and the privilege of being here. Now. 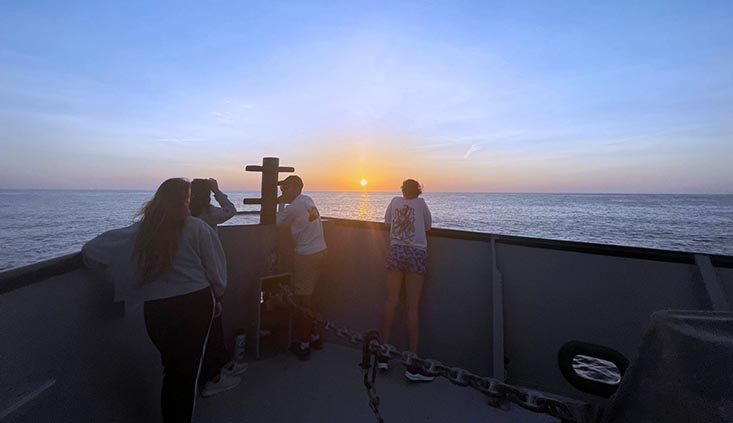 Students take in a sunset on one of the final days of the cruise in the Gulf of Mexico. Photo credit: Carlyn Scott

As the sun set that final night, we silently assembled on the deck and when the stars peaked out in the dusky sky, I wished that everyone on the planet could experience this.

Productivity is necessary. Without primary productivity there would not be enough oxygen produced to sustain life – productivity sustains and drains. I get it. And as we made our way back to civilization, sure enough, cell phones began to ping with notifications. Mine had been tucked inside my pocket for pictures but I neglected to activate the internet, reticent to return to the productivity required to live on land and anything but the deep blue and gentle waves of the Gulf.

But the land world found me, and in a true dose of welcome-back-to-life-on-land-reality, my car battery had died while on the cruise. 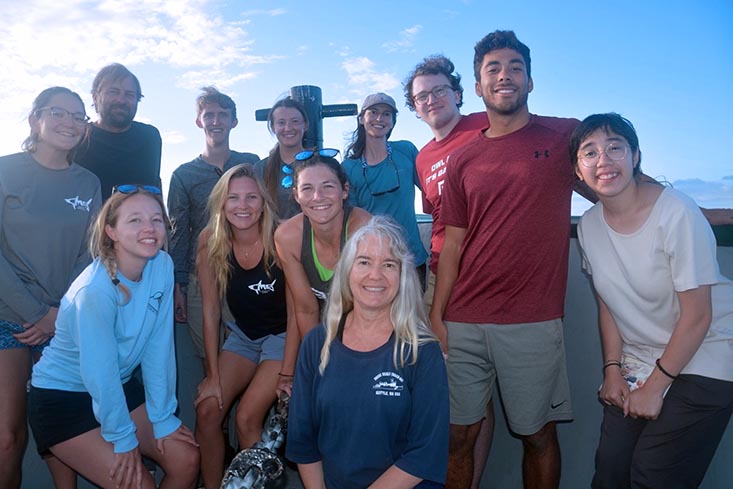 Members of the 2022 Pelagic Ecology course on the final day of the cruise. Photo Credit: Dr. Tracy Shaw

As my friend and I waited for electricity to exchange between battery conduits, we looked out over the seawall on campus, peering into the murky seawater. We jokingly denigrated its appearance, starting with its color: a brownish- green that was nothing like the translucent turquoise we had just sailed on for the past five days. We understood why: inshore waters have more nutrients and therefore are more productive causing a green sheen of photosynthesizing organisms to grace the surfaces. But there was the nonscientific reality: we were back in the land of productivity, and after we successfully jumped my car, we both departed back to our lives on shore counting the days until our next at sea adventure.