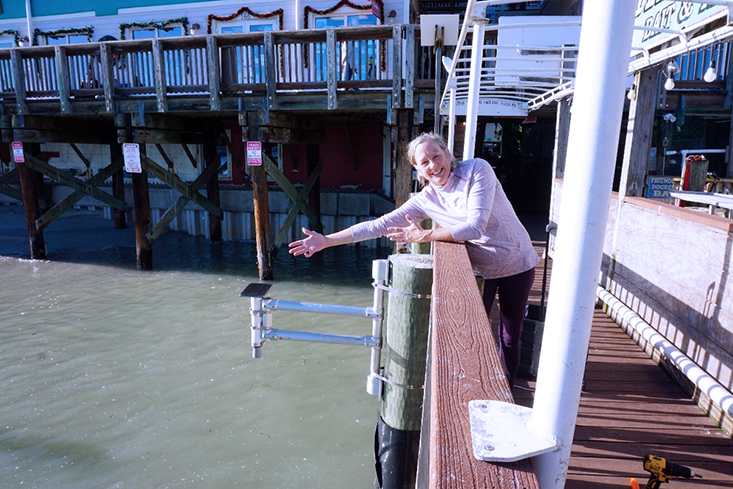 Above: Cheryl Hapke pictured alongside the Hohonu water level sensor at Hubbard’s Marina.

Scientists at the University of South Florida College of Marine Science (USF CMS) continue to build momentum on their portfolio of work dedicated to monitoring and addressing coastal change. In December 2021, USF CMS Research Professor Cheryl Hapke and Associate Professor Mark Luther, who also work with the Center for Ocean Mapping and Innovative Technologies (COMIT), teamed with Ping Wang, a professor in the USF School of Geosciences, to deploy a water level sensor at Hubbard’s Marina in John’s Pass.

The following interview with Cheryl Hapke provides more detail on these types of sensors and their importance for coastal communities.

Q. Why are you excited about this new installation? 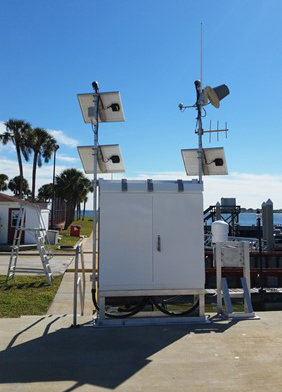 Above: For comparison, water level sensors are typically part of larger arrays which require a power supply and more robust structures. The set-up pictured here is in St. Petersburg, FL and is maintained by NOAA. Photo credit: NOAA.

A. The storm surge and flooding forecasts many of us use on a regular basis rely on several types of data, and one of those is water level trends and forecasts. Though hurricane and storm surge forecasts have continued to improve over the last several decades to provide better warning to communities in danger of flooding, sea level rise has added a very dynamic and complicated factor to the mix. This is where using more lower-cost, simpler, and low-maintenance water level sensors come in handy, like the one we installed.

The sensor was developed by a company called Hohonu to support the concept of hyper-local networks of sensors for accurate measurements and forecasts. Typically, sensor arrays for measuring water level are expensive and require frequent maintenance. As much as it would be ideal to have many more of these to increase the resolution, or detail, of forecasts to make them more localized to homes and communities, agencies and researchers are restricted by the cost of the equipment and personnel needed for maintenance.

Q. Who is involved in this project?

A. The sensor we installed at Hubbard’s Marina is part of a much larger project, headed by Principal Investigator Dr. Nicole Elko of Folly Beach, SC who is the Science Director at the American Shore and Beach Preservation Association. She was awarded funds from the Southeast Coastal Ocean Observing Regional Association (SECOORA) to purchase 34 Hohonu Water Level Sensors. Most of these are being installed in partnership with coastal communities on the East Coast from South Carolina to the Florida Keys. However, three of the sensors were dedicated for the West Coast of Florida. I have been working on coastal resilience issues with the communities of Sanibel and Captiva, and was able to get them engaged as part of the larger project. Each community installed a Hohonu sensor, were subsequently surveyed in by Nicole, also a co-founder of Hohonu, ended up getting sent an extra sensor and I immediately thought it would be a great addition to COMIT capabilities. We’re also the only academic institution receiving one! I’ve worked in close partnership with USF professors Mark Luther and Ping Wang on this as well. Ping will be surveying in the John’s Pass sensor sometime in January alongside some of his students so that we have precise location and elevation information for each one. We can’t thank Hubbard’s Marina enough for providing us a spot on one of their dock pilings to install the sensor. Working with Hohonu has been great and anyone who is interested in seeing the data can create a free account on their website and access the information for all of the sensors being installed throughout the Southeast.

Q. How do the data from this sensor impact coastal communities?

A. While storm surge and tidal inundation forecasts have been standard in the U.S. – including those for “sunny day flooding,” which typically happens in summer during heavy afternoon rains and sometimes exacerbated by a high tide – there is room for improvement. We can’t afford to continue working with the regional level of detail we have now. For us to have locally accurate storm surge and tidal flooding models that are meaningful to everyone in the Tampa Bay area, we need more data at greater resolution. As it stands now, the water level sensors we use are tide gauge locations that could be tens of miles away from your home or business.