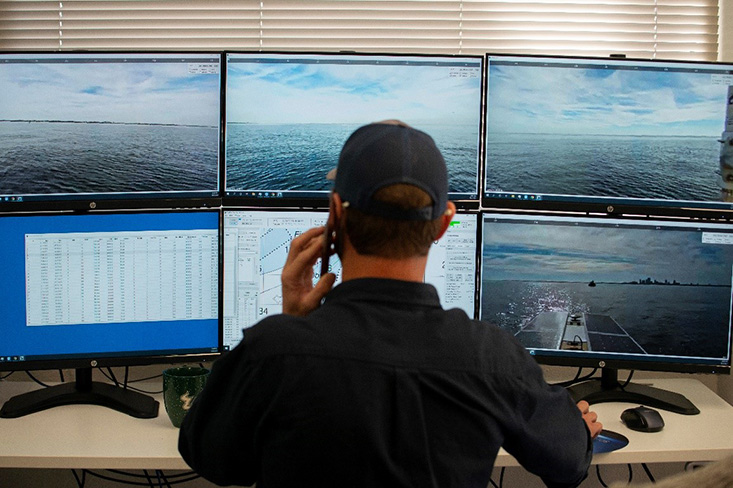 The Center for Ocean Mapping and Innovative Technologies (COMIT), an element of the University of South Florida’s College of Marine Science in St. Petersburg, recently completed a four-week field sampling campaign called the Tampa Bay Bathymetry Experiment or TBBEx for short. TBBEx used four different survey methods (platforms) to collect data on seafloor bathymetry (water depths) as well as coastal land elevations in the western portion of Tampa Bay. Because no single mapping technology can cover all the depths efficiently, COMIT scientists tested a combination of sensors and platforms to determine best and most efficient ways to survey these areas, which, because of sea level rise, are extremely prone to inundation and are thus top priorities for state, federal, and even international decision-makers.

“We couldn’t be happier about our inaugural survey,” said Steve Murawski, who heads the COMIT program. “What we hoped to do with this survey is to operationalize new ways of surveying our nearshore, coastal areas using integrative technologies and approaches.” 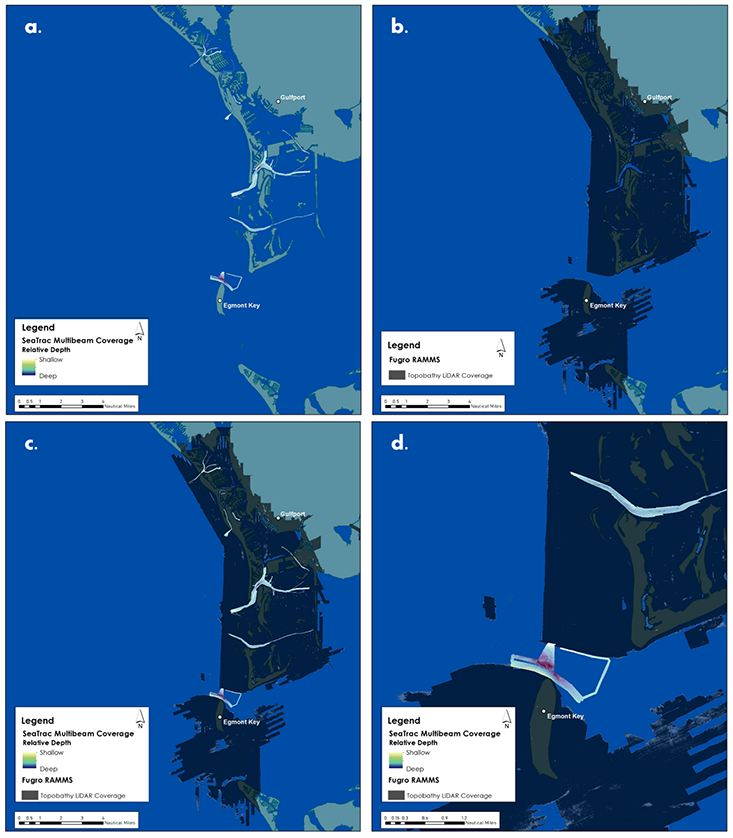 Above: (a) The seafloor mapping coverage achieved with the SeaTrac USV platform equipped with a multibeam sonar; (b) The seafloor mapping and land elevation coverage achieved with the Fugro’s airborne RAMMS system; (c) The combined mapping coverage from SeaTrac and Fugro; (d) Detailed, zoomed view of the combined coverage from SeaTrac and Fugro. Note: these data are preliminary.

The COMIT team moved ahead “by air and by sea”, using airborne and seagoing equipment. The seagoing platform was a novel uncrewed surface vehicle (USV) from SeaTrac Systems called the SP-48 equipped with an advanced multibeam imaging sonar. The airborne portion was completed by Fugro Inc., a geospatial survey company. Fugro used an airplane outfitted with its Rapid Airborne Multibeam Mapping System (RAMMS), which uses lasers to collect bathymetry from above the water, aka bathymetric LiDAR.

COMIT collaborated with SeaTrac for nearly four weeks to select and map areas within the study region using the USV, mainly in the deeper portions of Tampa Bay that would be problematic for LIDAR applications. Fugro completed four days of flights to collect bathymetry and topography data while SeaTrac continued to fill in the data gaps. When nested with one another, the datasets provide a comprehensive map of portions of Tampa Bay that leverages the strengths of each system. 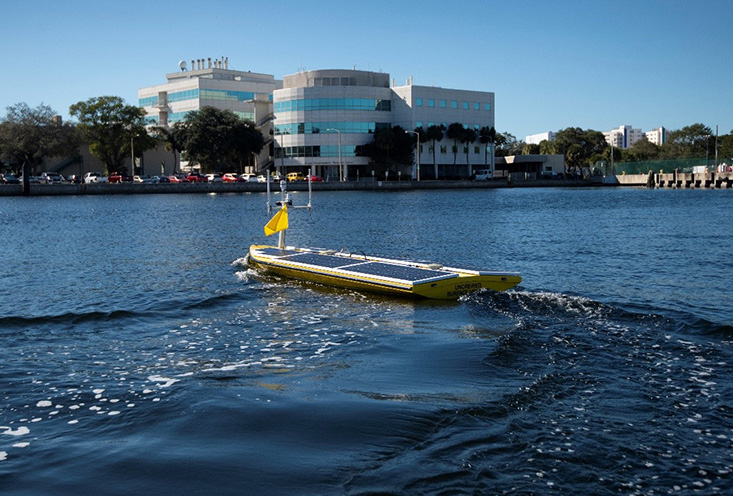 Above: The SP-48, SeaTrac’s Uncrewed Surface Vehicle used in this survey.

Tampa Bay’s complexity and wide-ranging conditions make it a perfect “test” region because they challenge the various types of mapping technology (e.g. tide fluctuations, variable water clarity). Shallow coastal areas encompass some of the most difficult areas to collect seafloor bathymetry, but they are also the most directly impactful to the people that live on or near the coastline. The results from the data collected and the operational side of this survey will be compiled and analyzed to inform larger-scale mapping plans for Florida, and beyond.

The power of partnerships

The success of this survey was due in large part to the partnerships among academia, government, and the private sector which provide rich multidisciplinary perspectives to our surveys, said Murawski.

"It really does take a village,” Murawski said, “especially on a project like this one where the logistics aren’t trivial and we are pushing the edges of innovation and capability.”

COMIT is a program funded by the National Oceanic and Atmospheric Administration (NOAA), Office of Coast Survey whose support has been critical in the Center’s field endeavors.

"COMIT and its partners have achieved a significant milestone in advancing USV technologies. NOAA's Office of Coast Survey, is particularly interested in the outcomes from these trials, especially when new approaches can improve mission priorities such as shallow water bathymetry, coastal resilience and emergency response," said Neil Weston, Chief Scientist of NOAA’s Office of Coast Survey.

In addition, the success of this effort is owed to the consistent, close-knit collaboration among COMIT, SeaTrac, and Fugro which ensured a well-coordinated effort, from survey planning to data acquisition and product development. And the collaborative nature of this project didn’t stop there – COMIT also benefited from international partnerships via the involvement of NORBIT Subsea, a Norwegian company specializing in marine sensors.

“We were incredibly fortunate to work with NORBIT and their U.S. partner Seahorse Geomatics, who loaned one of their multibeam sonars for the survey, enabling us to complete more field days with COMIT than we would have otherwise been able to do. We’re looking forward to working with them again in the future after seamless integration of the sonar into our vessel,” said James “Jigger” Herman, SeaTrac’s Co-Founder.

Partnerships were also at work within the CMS. Close to the outset of the survey, Murawski reached out to CMS professor and AAAS Fellow, Chuanmin Hu, for assistance. Dr. Hu is an optical oceanographer who uses sensors deployed from satellites to study the ocean. The satellite platform can collect data over very large spatial scales, but at the cost of higher spatial resolution, or detail. When combined with the USV and RAMMS datasets, however, it’s another piece of the puzzle.

David English, who is part of Hu’s lab, also assisted Murawski in taking over 60 measurements of water turbidity and reflectance throughout Tampa Bay in early January. This was done while Fugro was flying the RAMMS system and the water quality data will help calibrate and inform how certain water conditions affect the ability of airborne-based bathymetry sensors, such as LiDAR, to perform. 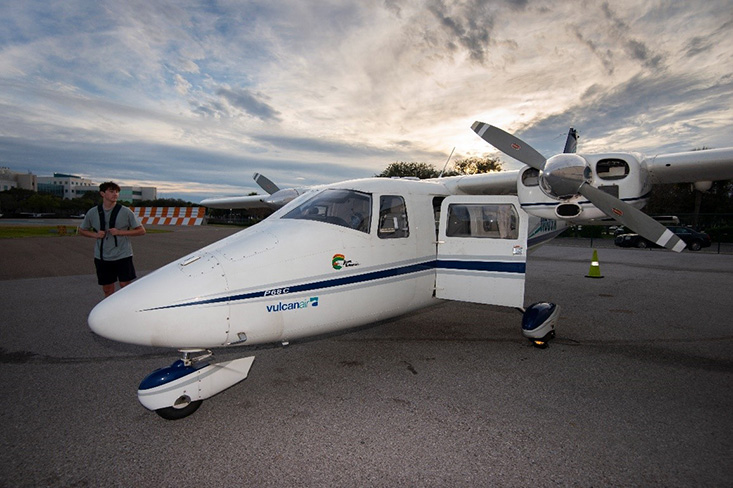 Above: Fugro’s plane equipped with the RAMMS.

The TBBEx could not have been executed without significant assistance from several graduate students at the USF CMS, including Sean Beckwith, Rosemary Burkhalter-Castro, Bea Combs, Cat Dietrick, Alex Ilich, Garrett Miller, Mark Mussett, Steven Paul, Catalina Rubiano, Kylee Rullo, and Jill Thompson-Grimm. Many thanks are also owed to Eckerd College who generously assisted in collecting drone footage of the SeaTrac platform in action, as well as Tampa Bay Watch who provided dockage for the chase boat used in tandem with the SP-48.

The data collected during this survey provides a powerful demonstration of how to serve our coastal regions with the information they need to contend with making their communities more resilient, Murawski said. The COMIT team will begin working on processing the data, as well as developing a web-based portal to serve this information publicly. More details will follow in the coming months. Those interested in these data can expect to be able to view and download the bathymetry in a user-friendly portal housed on COMIT’s website in the coming months.

Check out some more highlight photos from the survey!