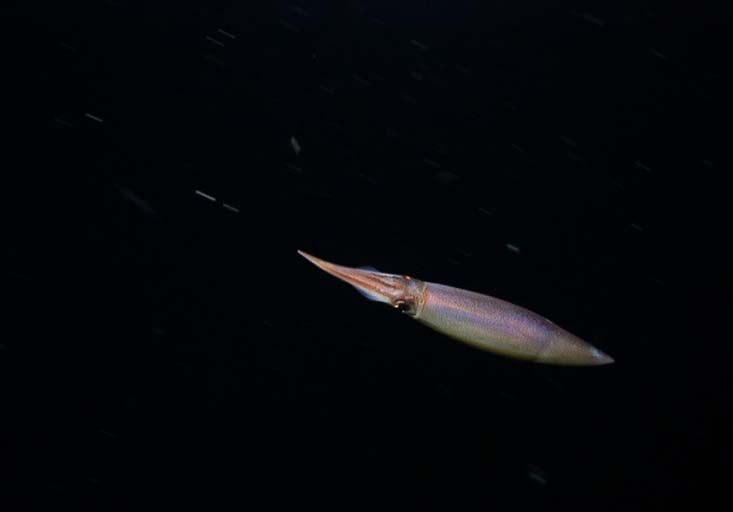 IMAGE ABOVE: This study is the first to drill down into the relationship between oxygen, temperature and the metabolic requirements of vertical migrators, which include krill to the jumbo squid (shown here). The metabolic requirements of vertical migrators suggest they may experience an expansion of their native habitat in response to changing ocean conditions. Credit: Stephani Gordon, Open Boat Films

Brad Seibel still remembers the headlines from 20 years ago that sounded like a B-rated sci-fi movie: “Invasion of the jumbo squid in Monterey Bay” and the like.  He was a post-doctoral scholar at the Monterey Bay Aquarium Research Institute (MBARI) at the time.

It was anything but fiction. The voracious eaters, which historically live in more tropical latitudes, showed up off central California in record numbers -- fattening their bellies with hake, rockfish, and other commercially important species to the dismay of local fisherman. Scientists figured their arrival had to do with a combination of climate change and overfishing, but the details were fuzzy.

Now a professor and marine physiology expert at the USF College of Marine Science, Seibel recently published a paper in Nature Climate Change that sheds light on those long-ago headlines. It connects the dots pertaining to animal metabolism that he’s collected over 20 years and seven research cruises in the Gulf of California, Mexico -- and adds a new chapter to the story of how some animals may respond to the warming oceans. 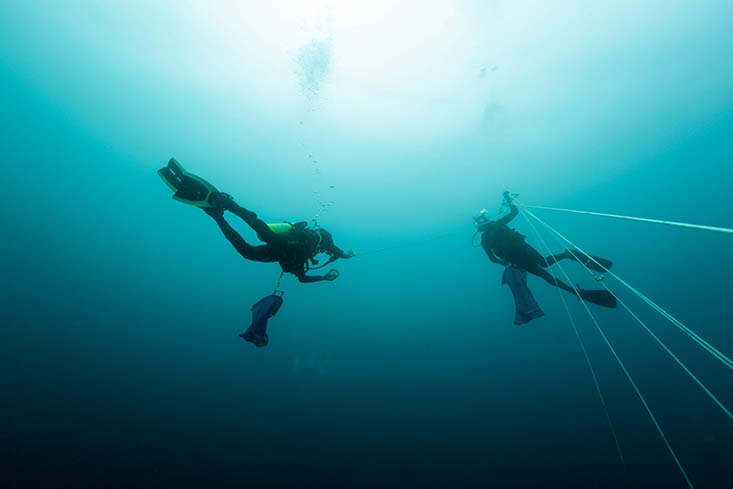 This study is the culmination of 20 years of research by Brad Seibel on vertical migrators that has included scores of dives like this one. Credit: Stephani Gordon, Open Boat Films.

“The basic narrative in recent years has been that as the ocean warms and loses oxygen, animals in will be chased out of their native habitat and move into cooler waters in more northern latitudes,” said Seibel.  “But this is an over-simplification.”

Not all marine animals will react to changing conditions in the same way.

Seibel coauthored the publication with his former graduate student, Matt Birk, now a professor at Saint Francis University in Pennsylvania. The study is the first to drill down into the relationship between oxygen, temperature and the metabolic requirements of vertical migrators, which include billions of marine animals from tiny crustaceans called krill to the six-foot-long jumbo squid. Seibel and Birk used modeling to understand how six species of krill and the jumbo squid would respond metabolically to the varying parameters approximating day and night habitats. 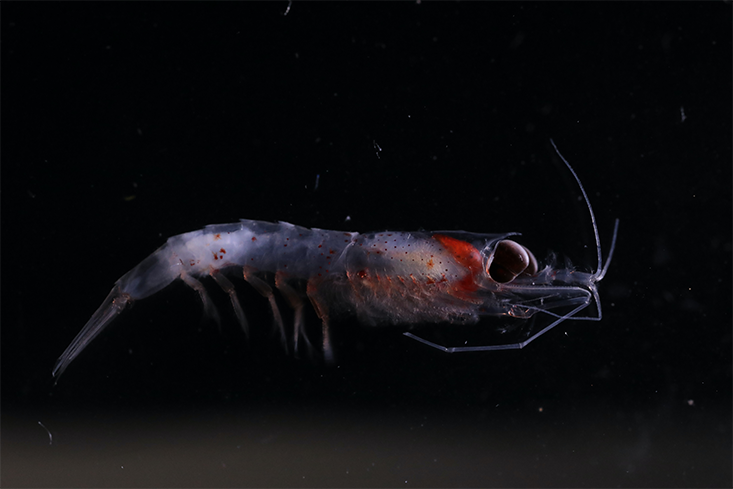 “Vertical migrators buck the basic narrative, which is based largely on studies of coastal animals,” said Seibel.

As the oceans warm squid and other vertical migrators living in tropical zones are likely to expand their habitat northward – but not necessarily leave their native tropical zones.

That’s what likely happened 20 years ago in Monterey, Seibel said. An El Nino event temporarily brought warmer water to the coast. (Think of it as a relatively short-lived model of climate change.) The warmer water allowed the squid to expand their range northward, where they took advantage of new food sources – heavily impacting the local fisheries -- even though food was plentiful back in the more tropical latitudes.

“It wasn’t that they didn’t have enough oxygen or that it was too hot for them further south; before the El Nino event it was too cold for them up north” – a nuance related to their metabolic requirements that matters, Seibel said.

Vertical migrators live very different lives than coastal species, which experience a fairly consistent supply of oxygen in waters well mixed with the atmosphere. Migrators live at depth during the day, where it’s cold and dark and there’s less oxygen, and they travel hundreds of meters toward the relatively warm ocean surface at night to eat, where oxygen is plentiful and when it’s safer to forage.

“This study is a good example of the fact that the conclusions we often draw from well-studied -- and easy to catch -- organisms may not hold true for the greater diversity of species and lifestyles found in the oceans,” said Birk.

It turns out that the effect of temperature on the metabolic rates of vertical migrators is 4-5 times greater than for most coastal species. When at depth, the squid, for example, don’t do much at all. When migrating to shallower waters for a meal, their metabolic rate skyrockets, said Seibel.

Modeling that incorporates heightened effect of temperature on the metabolic rate of vertical migrators suggests that climate change will expand the available habitat for vertical migrators to the north and south by as much 10-20° latitude by the end of the century, said Seibel.

“We really need to drill down into animal physiology and better understand the ways that various species evolve and adapt to environmental conditions,” said Seibel.

VIDEO ABOVE: Brad Seibel diving with the jumbo squid (Dosidicus gigas). (These are smaller in size.) If you turn up the volume, you can hear one of the squid run into him on the dive. The squid is momentarily stunned before swimming off again. Credit: Stephani Gordon, Open Boat Films.