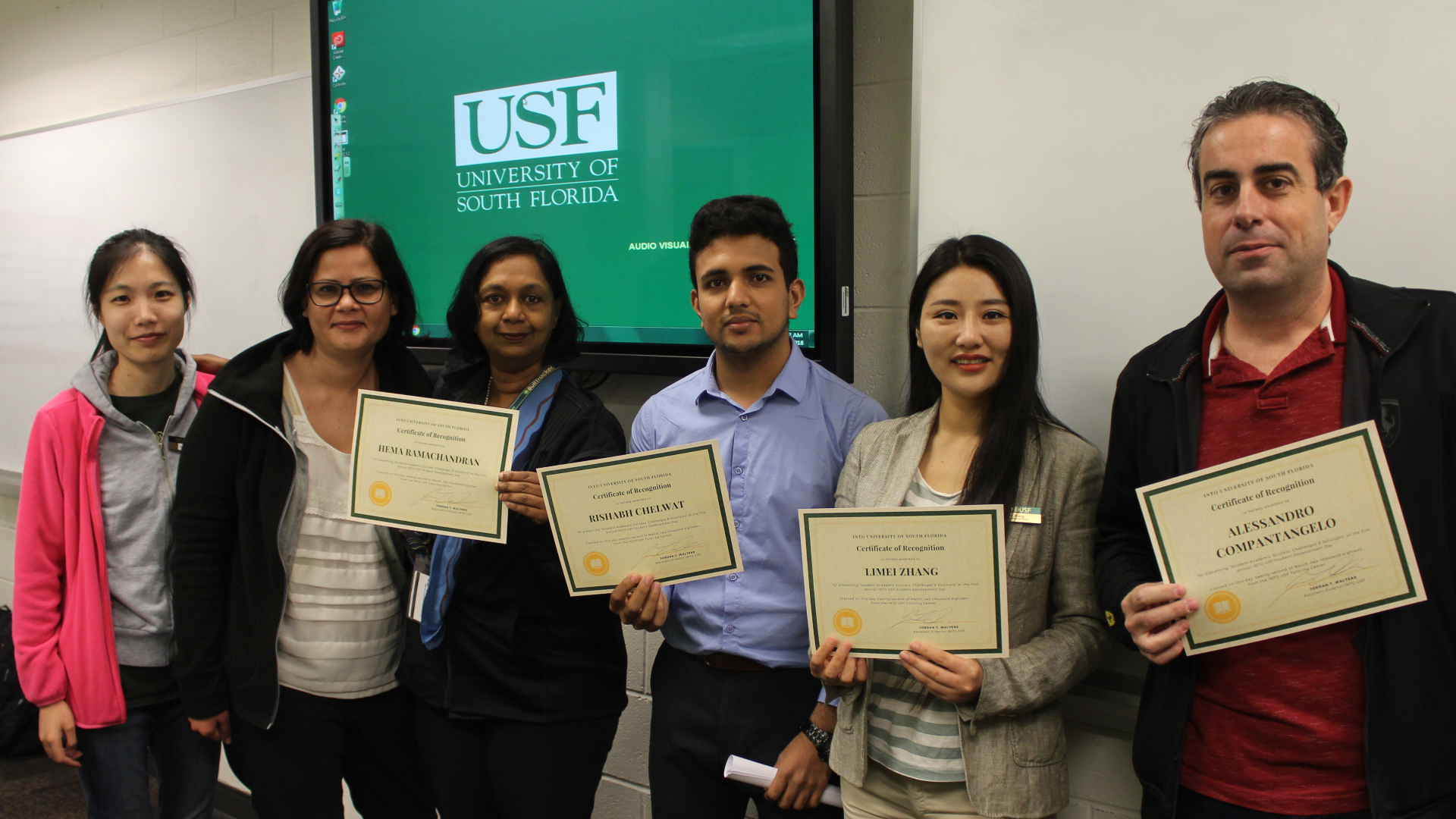 (From left to right) Former INTO USF students Limei Zhang, Rishabh Chelawat, Alessandro Compantangelo, and INTO USF Faculty Member Dr. Hema Ramachandran, pose alongside other INTO USF staff with their Certificates of Recognition, awarded for their participation in Student Development Day.

INTO USF recently hosted its first ever Student Development Day, a conference-style event designed to give students the opportunity to learn about strategies, tools, and resources they can use to develop themselves academically and professionally.

At the March 22nd event, students had the opportunity to attend at least one of 40 sessions from 45 presenters on a variety of topics such as public speaking, excel for beginners, crafting an academic resume, tips for the IELTS test, and more. Presenters included current and former INTO USF students, INTO USF staff and faculty, and representatives from several departments across USF (including Career Services, Academic Success Center, Undergraduate Studies, and Students with Disabilities Services).

"I think the value students get out of Student Development Day is it's something they wouldn't have within their structured classroom environment. It's additional topics that instructors, and other members of the university, can get together to be able to say, 'We don't necessarily cover this one topic, whenever we teach or tutor.' So this is an avenue for students to get that additional information," said INTO USF Tutoring Center's Assistant Director Jordan Walters.

Jordan Walters, along with Tutoring Coordinator Donna Rock, led the effort to organize Student Development Day.
"We've had a waiting list for entrance into some of the sessions. I think the students are excited to see the topics we are offering, and the presenters are excited to reach this audience," commented Donna Rock.

One of the most popular sessions to take place was a session called Student Academic Success: Challenges and Solutions. The panel, which was facilitated by INTO USF faculty member Dr. Hema Ramachandran and led by former INTO USF students Limei Zhang, Rishabh Chelawat, and Alessandro Compantangelo, highlighted the challenges faced by INTO USF students and provided useful tips and resources to overcome them.

"As an international student here, and a former Pathway student, I had some problems [and] challenges. I appreciate INTO USF because they gave me so many resources and helped me succeed in the academic area," said presenter and INTO USF Cultural Attaché Limei Zhang.

The inaugural Student Development Day attracted more than 530 students and was positively received by the entire INTO USF community. The event is expected to become an annual occurrence and exemplifies INTO USF's ongoing effort to provide its students with valuable opportunities to enrich themselves beyond the classroom.

To view highlights from the inaugural INTO USF Student Development Day click here.