OCG Labs – From Field to Mapmaking 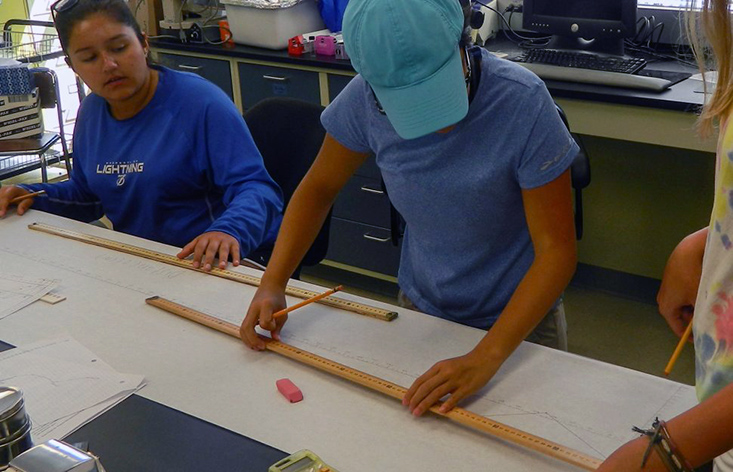 The life of an academic researcher

Last week, the OCG 2016 visited Caladesi Barrier Island. The girls learned surveying, plant identification, and sediment sampling. They became field scientists. This lab was designed to bring the participants full-circle: from field collection to laboratory analysis, and finally, to presentation of results. The life of an academic researcher.

In this lab, the girls learned how to convert raw measurements of the stadia rod above (and/or below) sea level to a graph, and, ultimately, a map of Caladesi, in profile, from east (in the center of the dunes) to west (out to the sandbar below the tideline).

Once the topographical outline of the beach transect was plotted, participants examined other information. At eight of our survey stations on Caladesi last week, sediment had been collected. The girls sieved all sediments through three sieves to determine the samples’ grain sizes: >500 µm for coarse sand, 250-500 µm for medium sand, >63 µm for fine sand, and anything under 63 µm was designated as clay.

All samples were weighed to determine the proportion of grain sizes at each station. The highest concentration of fine sediment was found up in the dunes, an environment dominated by wind. The majority of coarse material, full of shell fragments and small pebbles, was at Station 6, in the tidal zone, where wind, waves, and possible longshore currents all combine to make a high-energy environment capable of moving large material. The girls also noted that the fine sediment was present throughout parts of the island where vegetation was high, leading them to conclude that plants assist in stabilizing a sandy environment, such as a barrier island. 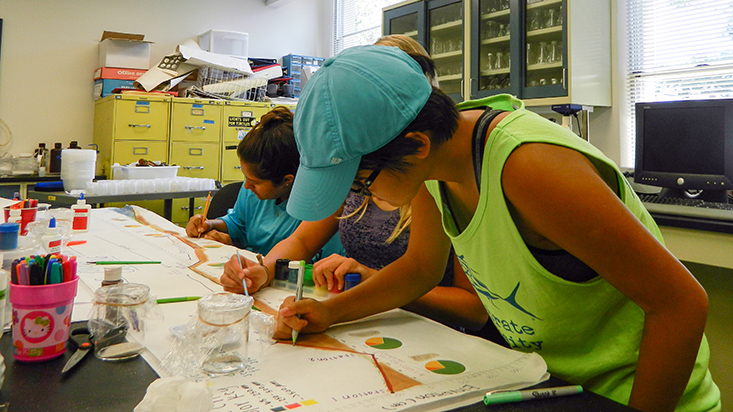 We examined samples under the microscopes, and drew examples of the grain types we found. We also did a chemistry experiment, dropping small amount of dilute hydrochloric acid on each sediment sample. Some of the samples “fizzed” on contact, like soda giving off gas. The “fizziness” was acid reacting with calcium carbonate (CaCO3) to produce carbon dioxide, via the equation:

Most shells & corals are made of CaCO3. The more biogenous the sediment, the more “fizz.” Our most biogenic, calcite-rich sample was also in the tidal zone, at Station 5. The shifting waters probably keep the seafloor well-supplied with new shelly material.

All of this information was added to the map, along with drawings of the plants noted during the survey. The result is what we call a “beach profile,” of the sort found in scientific papers, atlases, field guides, and textbooks all over the world. Welcome to scientific authorship!