OCG in the Field: Research Cruise Aboard the R/V ANGARI 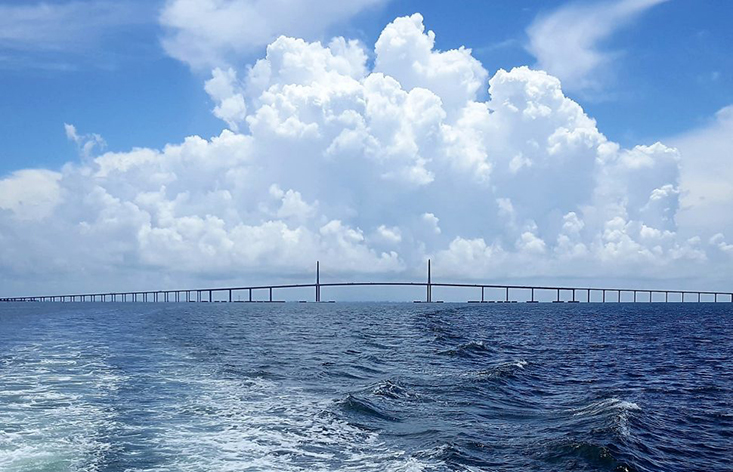 Sunshine skyway, aboard the R/V ANGARI

For one of their field trips, campers got a chance to experience something that few scientists ever get the chance to experience: a day on a research vessel! The ANGARI foundation, founded by sisters Angela and Kari, brought up their research vessel, the ANGARI, for OCG. We got an early start to the day, leaving the dock before 7:00 am so that we could get a head start on our transit to our first sampling site! On board, we had equipment for sampling biological, chemical, and geological features of our Tampa Bay habitat, and the girls couldn’t wait to experience their first research cruise! 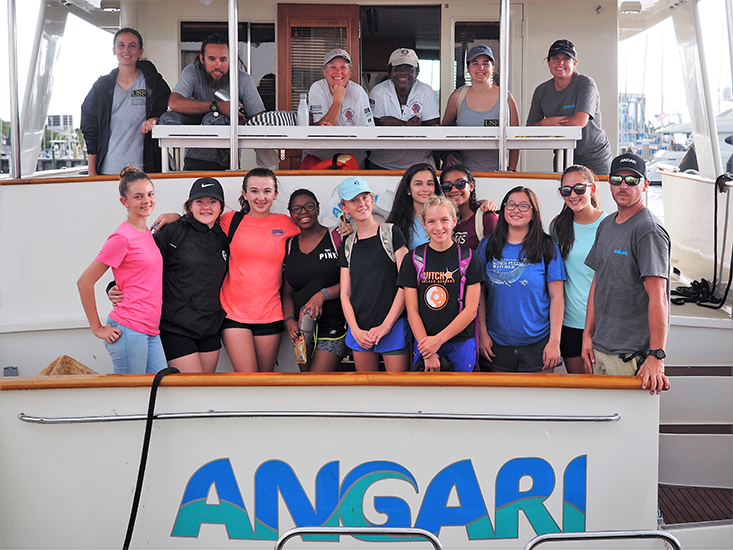 The day started with a quick tour of the vessel and a safety briefing by our captain, Angela. Once the girls were boating safety experts, we learned the parts of the ship, and how to use sea-faring lingo to refer to the “bow” (front), “stern” (back), “port” (left side), and “starboard” (right side). As we began our journey to the first site, the girls had some time to eat breakfast and enjoy the view from the top deck of the ANGARI…a pretty good way to start the day!

Upon arrival at our sampling site, a flurry of activity began as the girls got ready to take their first pieces of data for the day. One group sampled the water using Niskin bottles, oceanography’s tried and true method for obtaining water samples. The bottles are deployed using a winch system over the side of the boat, and the girls got the chance to set up the bottles and help with deployment, as well as to collect water from them after the bottles had completed their transit to the deep (actually Tampa Bay is not very deep).

Once we had our water sample, the group of girls testing ocean chemistry was ready to rock and roll. Some of our staff led the girls through testing the water samples for nitrates, phosphates, ammonia, carbon dioxide, dissolved oxygen, and alkalinity. It’s safe to say that the favorite part of the chemistry station was the color-changing chemicals we used in our tests to determine the amount of each dissolved gas or nutrient in the water!

The girls got a chance to be the chemists, and completed all of the experiments themselves while our staff explained the importance of each of the nutrients to the marine environment and walked them through the use of the HACH nutrient testing supplies. HACH nutrient kits give us the chance to use a standardized set of methods and measurements that are used across the globe for measuring nutrients! It was also a fun opportunity to introduce the girls to basic lab procedures and to learn how scientists can use innovative ways to take their lab techniques out into the field with them.

Meanwhile, the groups outside were busy deploying equipment such as the Shipek grab, which is a giant claw that brings up sediments. Another group worked with the Hydrolab, which takes water quality data. Each piece of information from each group can be put together into a bigger picture of what is going on in Tampa Bay!

Between our sampling sites, we towed a plankton net and the girls got the chance to observe and identify types of plankton using the microscopes.  Observing and identifying were not the only two things we did with the plankton! It was time for an OCG tradition, drinking plankton! Everyone who wanted to participate was invited to take a sip of the water from the plankton tow, leading to priceless reactions and laughter all around. Even our fearless captain and crew participated right along with the girls! Everyone who has ever swallowed sea water has drank plankton in their lifetimes, but the fun activity really drove home just how much life is in the sea that we may not think about on a day to day basis.

We learned about why plankton are important and that they form the base of the food chain for many creatures (besides the campers). The girls rotated throughout the day so that everyone got a chance to experience deploying a variety of equipment and carrying out the nutrient experiments.

Finally, it was time to head back. On the way back, we pulled a trawl net so that the girls could experience seeing some creatures that aren’t microscopic: fish and benthic invertebrates! We caught Sea Robins, Purple Crabs, lots of Sea Urchins, and a Sand Perch that was insistent on playing hide and seek in the bucket. When it was finally found and caught, it jumped up out of the camper’s hands in an effort to escape! Laughter and shouts ensued as the search for the Sand Perch was on. Eventually, it was found and measured, then returned to the sea.

After we finished the trawl, it was time to clean up and reflect on the day as the vessel pulled back up to the dock.   The campers and staff thanked the ANGARI crew for their help, and disembarked carrying their lab books full of the data they had collected about our very own Tampa Bay.